Detecting On The Bottom Of The River – What Could Be Found There?

Sometimes it is nice to return to your home city. Every time you go to where your childhood and youth passed, you are overwhelmed with memories from the past. In my case, it is also memories of digging, the first finds, the first find pits and many other “firsts” in the addition.

You drive through all the native roads and everything pops up in your head as if in reality – here I found this coin, there I found some bottles of beautiful patterned glass, and here a soldier was found, here the Germans had their trenches. There is no end to these memories and, interestingly enough, there are still places where you have never dug in the past 15 years! And I wanted to go there. So I had one location, I dug there along the tops of the cliff, where the line of defense was. I still didn’t even think about antiquity, but it would have been worth going down, closer to the river. But then we thought about antique finds differently – only a pit, only random coins, more royal garbage. 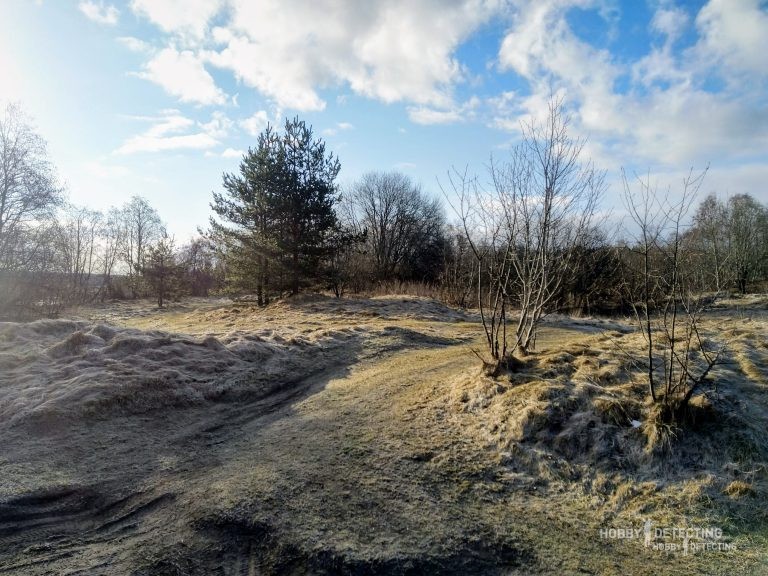 And I came down from that cliff closer to the river. I came here in my car, since it is an SUV, and you can easily ride on the tracks made by fishermen and hunters. The car on the side of the road, a little bit driven it between the bushes, the place is located in the border zone, and we never need too much attention. I was using the German camouflage “flecktarn”, as it is easily lost in the spring landscape, it will break the image and it will not catch your eye 30 meters from the location. 🙂

I uncovered the detecting device and estimated the terrain, what there is and where to go. The whole story is that the modern road and the new bridge passed 500-600 meters from this place, at an altitude where it is safer. But in the old days, everything was different here and an experienced eye pulls out of the landscape of house pits and the outlines of that old road that has been here for the last 500 years or more! A little to the side was the estate of the local landowner, and a little further its buildings. Basically, there were sheds, but no wonder that in one of the buildings there was a small tavern, the place was convenient. The old road with a bridge over the stream, the travelers had to stop, sleep, drink and eat, walk and have fun somewhere. A few kilometers away there was a seaport where travelers and merchants could dive aboard ships and sail to neighboring countries, to Europe. 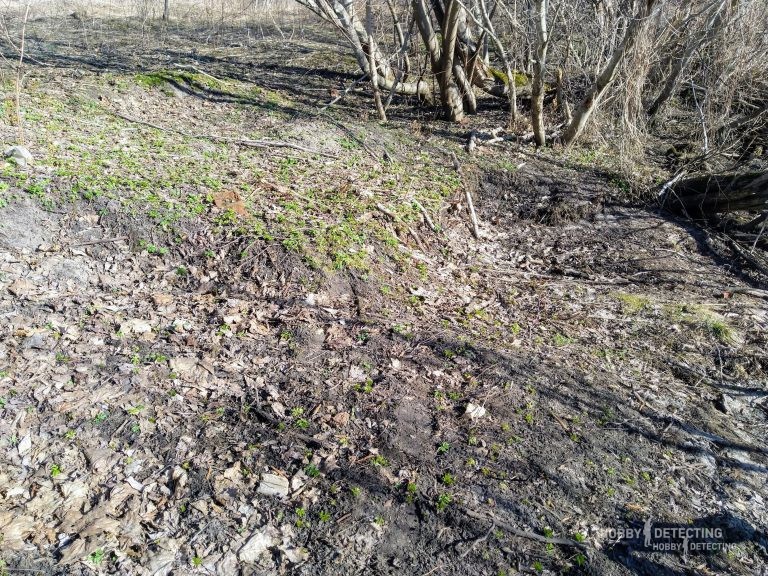 The experienced eye also notes holes of past diggers. The holes are made unprofessionally, only tops and without any depth. 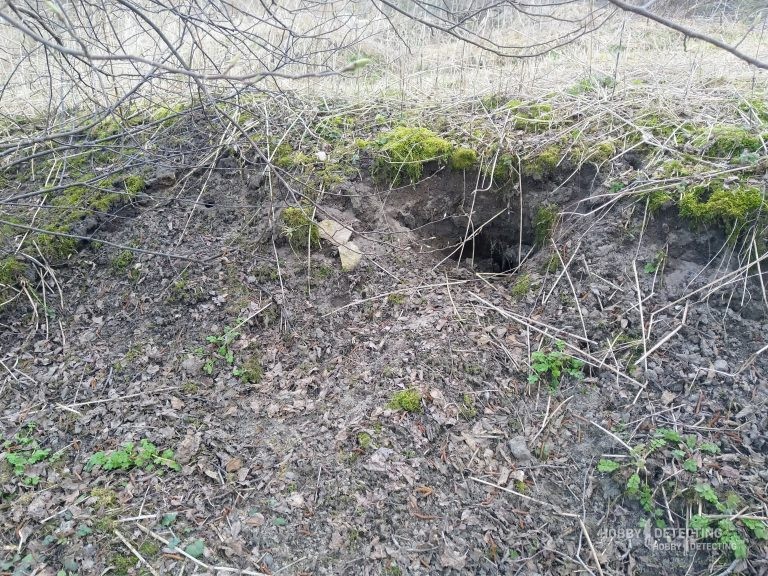 Along the edges of it, there are remains of stones and ceramics. They were obviously not hunting for metal but were looking for bottles. They didn’t find much, of course, it can be seen from the hole, that it was small and quickly filled up. People would not take out the garbage close to the highway and near the bridge over the stream but would take it higher and farther away, where no one will throw their waste away. And along the stream is the best place to rest, you and the horses can drink water. And who would litter such a place? Only narrow-minded people, like those that dug here, for example. And no one will settle very close to the water – the flood in spring and autumn raises the level of the river and the stream very well.

And therefore I decided to go on the eroded shore. Yes, it is full of silt, but the layer of silt is carried out completely at the mouth of the stream, and the banks must be more or less intact. 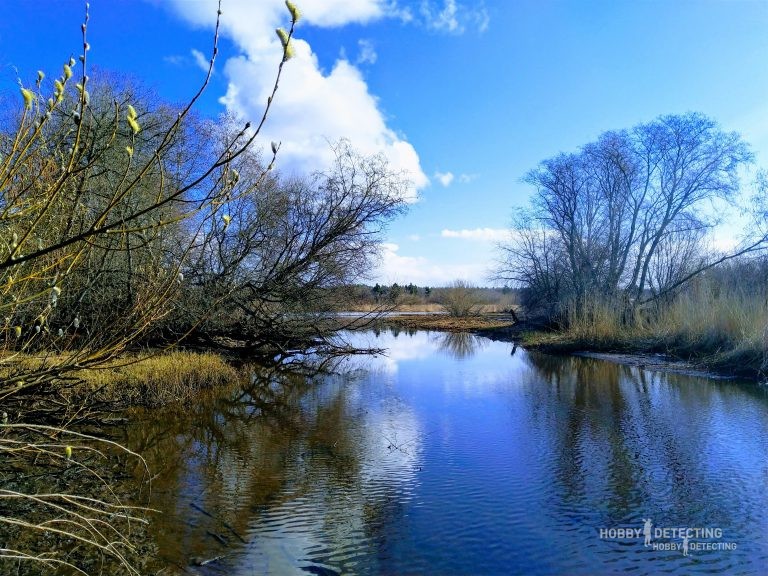 It was convenient to walk only on fallen trees and sticks, otherwise, you would fall to a depth of more than one knee or more, and getting out is difficult. But this place also gives finds, which is interesting! 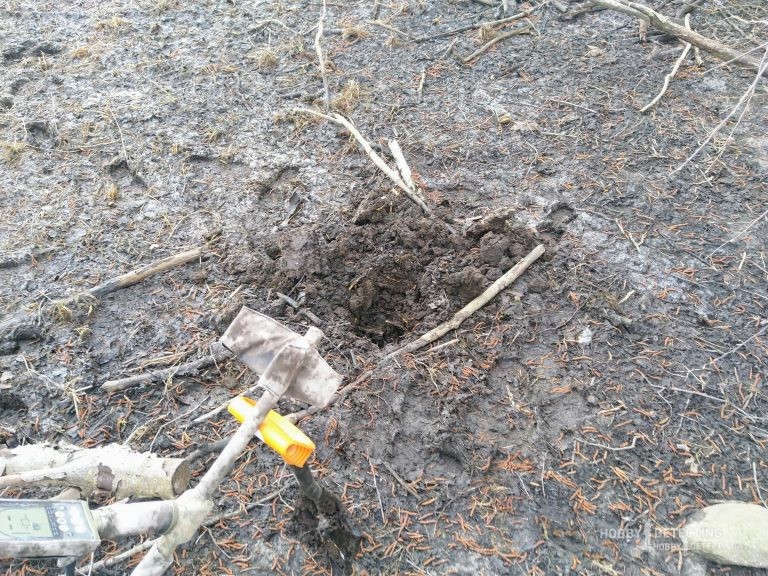 In addition to pull-tabs and bottles, the first old find also appeared. 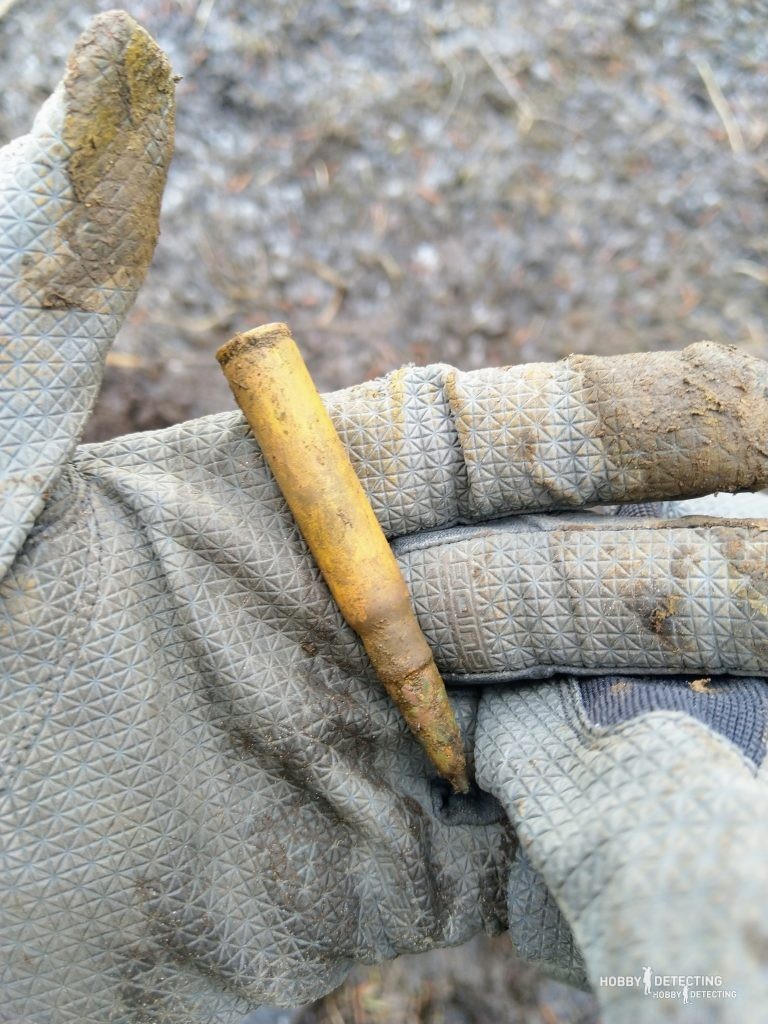 The places here are full of history and the war also has its parts here. I found a few shells and cartridges, clips. Apparently, there was something here. The condition of the metal here is as if it was laid here recently, there are traces of rust, but the color itself is still covered with an unusual color. 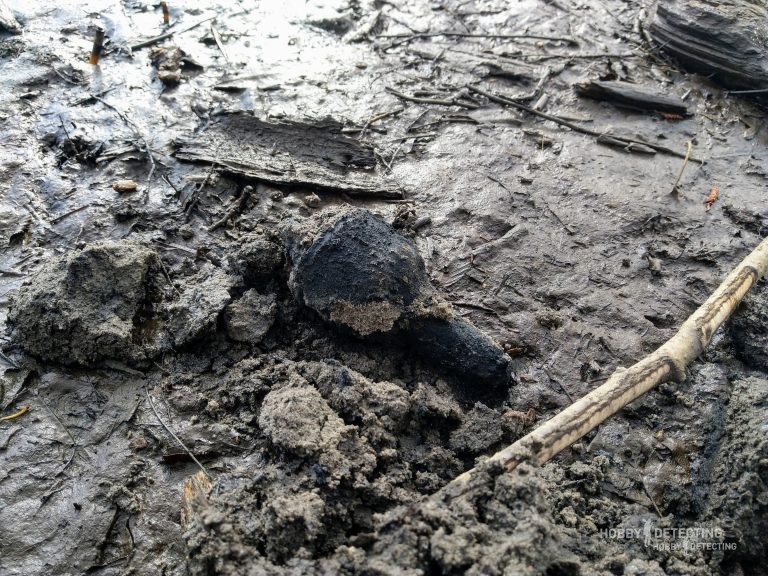 It is better to stay away from such pieces, even if this is only a cumulative anti-tank grenade from a German hand-held grenade launcher, but in the event of an explosion, it will tear off limbs. So be careful while detecting and be careful with unknown objects of cylindrical and round shapes of different sizes. 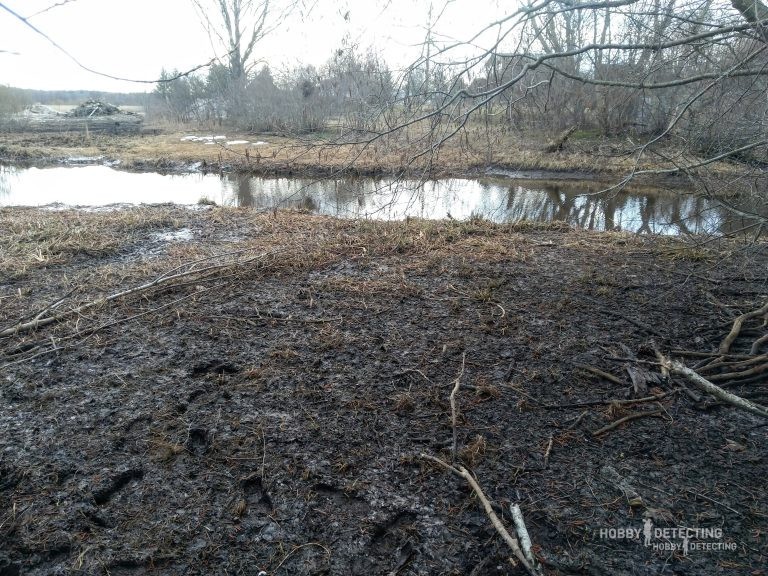 In the photo above, you can appreciate how the river is flooded and floods the coastal banks with silt. From a powerful wide river in flood, it passes into a small stream closer to the middle of spring, but the terrain at the newly formed bank becomes impassable. You fall to a rather great depth, the sludge tightens and does not let go of the legs, therefore if you should decide to walk there, then only along the fallen trees. It is very difficult ground for any metal detector, and the abundance of metal debris does not allow to properly set the ground balance on the device, so I recommend setting the neutral value – for the Equinox this will be 0, and for other devices (Deus, Garrett, and others) about 85-90. 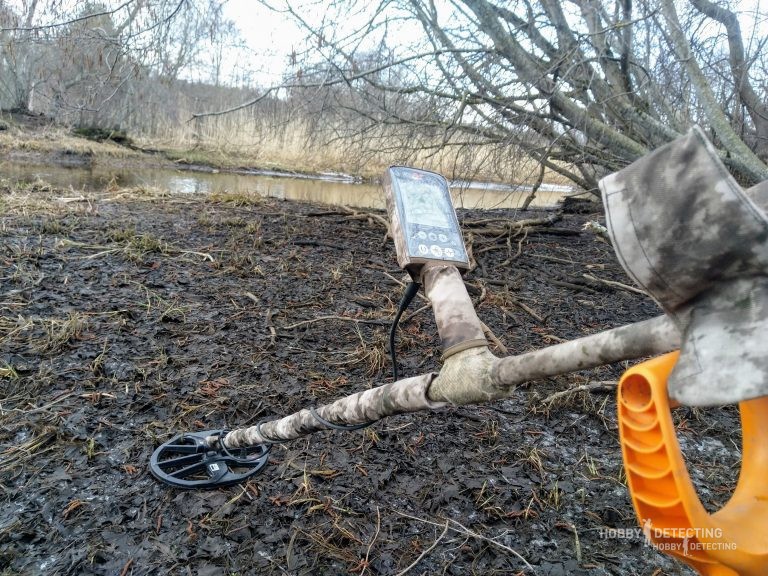 But it won’t work for a long time in such places. I understand that I made a mistake when I did not take the sniper coil with me, in the river, there are signals that remind me of the ones in the sea. And some other old finds also appeared. 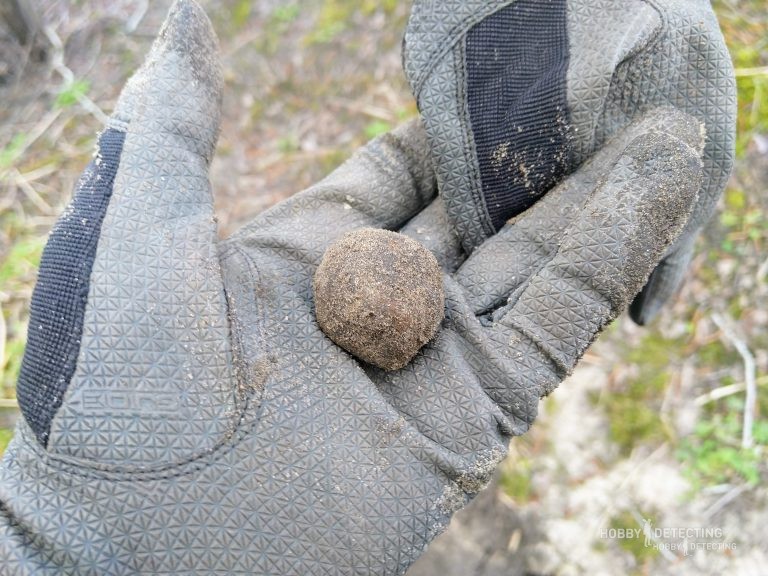 An interesting projectile, an old one, it gave a good and strong signal. 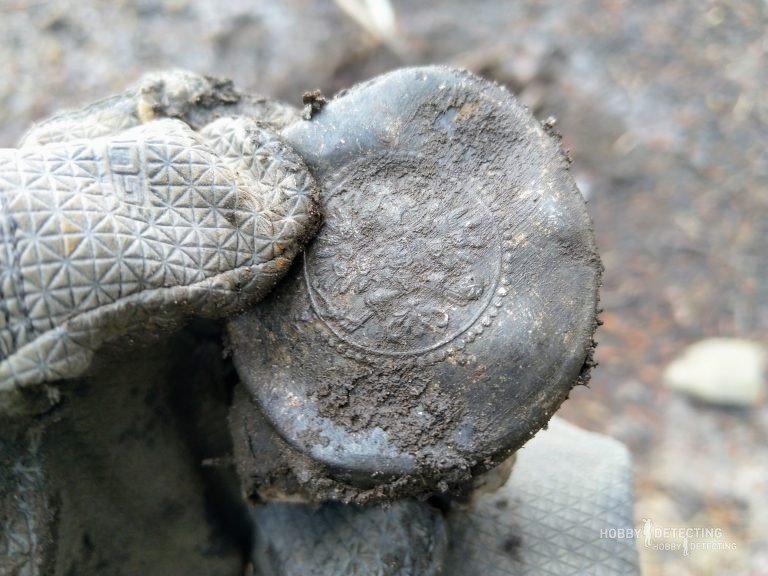 An incomprehensible part of non-ferrous metal, but with the emblem of the Russian Empire! Beauty!

I decided to go along the coast and look, there must be coins somewhere. 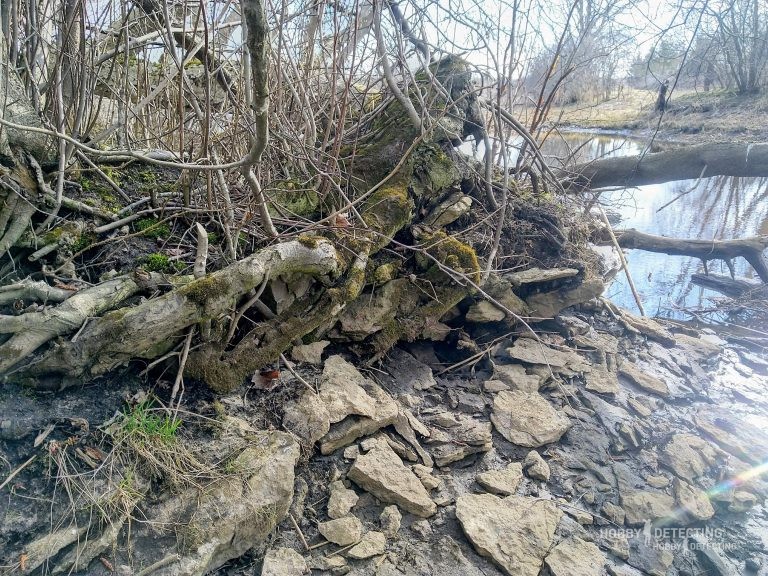 I stumbled upon the remains of an old bridge, which was destroyed after the war. In some places, wooden piles are still visible, which still stand in the water, but over the road, trees are already firmly overgrown and rooted in the stone formwork of the shore. 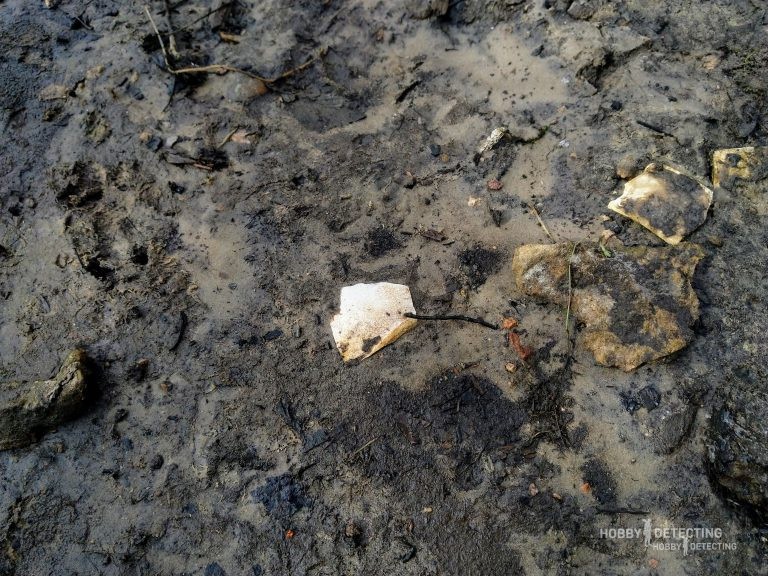 Near the bridge, everything is strewn with ceramics. I wonder if there could be a treasure here. Although it is unlikely, the place is painfully crowded, in front of everyone, in such places you will not hide anything. 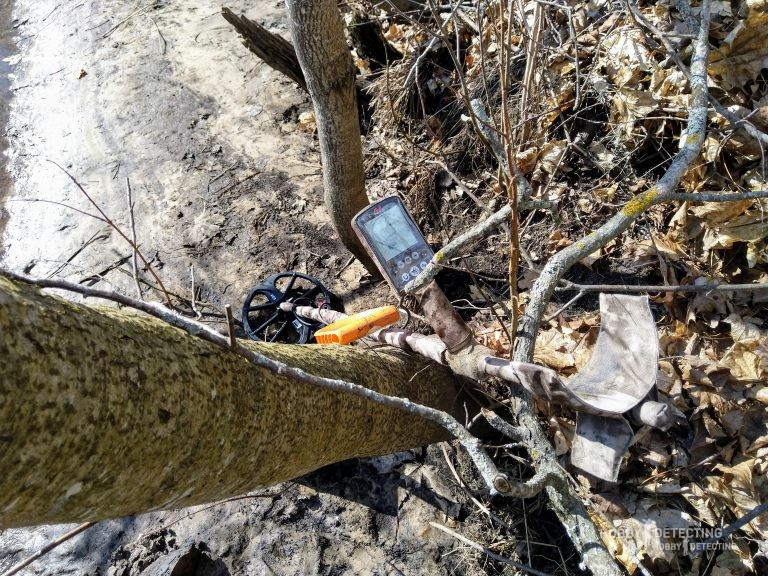 So, what was the result? A few pieces of iron, a projectile, an old unidentified thing, Soviet coins, which are not very interesting. Where are the imperial coins? It is not surprising that with such silt they could be deeply buried, and no metal detector any longer catches them and does not see them. The reality is that if you dig up the place with a tractor, then there will be a lot of Imperial coins, but unfortunately, I do not have a tractor.

If you have a plan on walking in or near water while detecting, in boots or in a diving suit, you should definitely wear something on your feet, because the bottom is full of garbage and iron, the possibility of injuries is not excluded.