Searching For Dugouts And Shelters Of The Wehrmacht And The SS (WW2 Detecting, Schemes +)

Every WW2 detectorist knows that if he wants to find good finds, it is necessary to dig in the places where the soldiers on the front line lived and rested. It could have been some shelters directly on the front line, or a dugout, where a detachment of soldiers lived for quite a long time and thus it is littered with various objects – both a garbage dump near the dugout and lost/left things. The easiest way to find them is to find either a shelter or a dugout. We will talk about such dugouts.

In general, a large variety of shelters were inherent in every German defensive zone along the entire length of the Soviet-German front.

The approximate location of the dugouts in the positions.

As can be seen in the diagram above, the dugout/shelters were located mainly at a distance of 20-25 m. In it, the soldiers spent their personal time and rested during combat, while the officers led the soldiers into the trenches of the first line.

A small example and a top view of where there can be shelters and dugouts on the front line of the trenches. 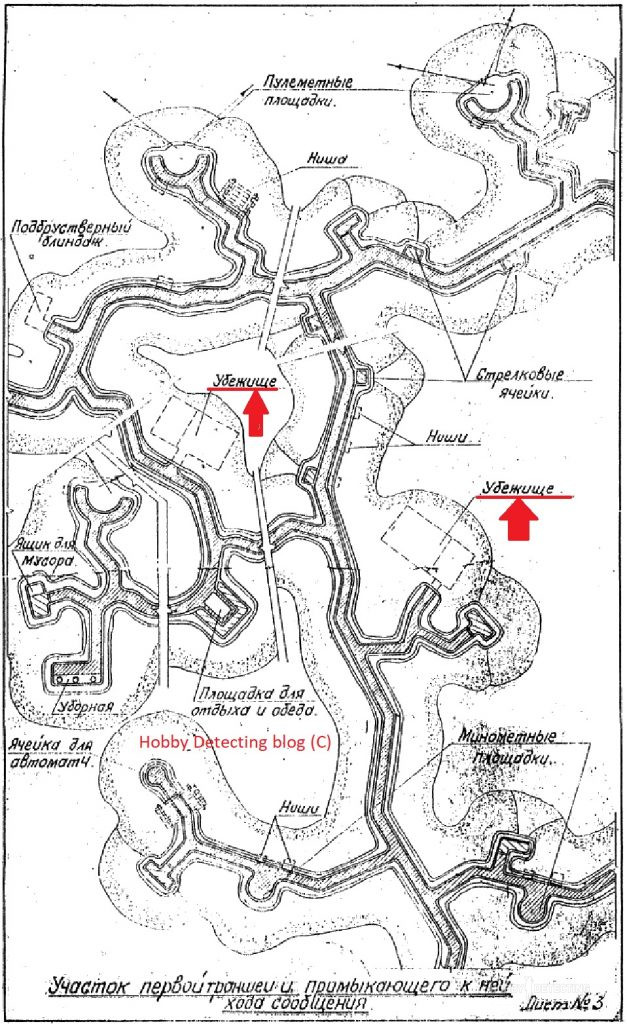 If you have an aerial photograph of that time and can put it on a modern Google map, then this will help you determine in advance the possible places of the dugouts. In the case, if you have the opportunity to use the Lidar elevation map, then this greatly helps the search. An example of a Lidar map, where the line of defense of the SS troops from 1944 is clearly visible:

As you can see, the Lidar map perfectly shows the entire branched network of field fortifications with machine-gun points, shelters, communication lines, in the lower left corner you can see the second line of defense (at a distance of approximately 500-600 m).

Unfortunately, most of the dugouts in the area were littered with debris all 40 years after the war.

Approximate types of dugouts on the branch of machine gunners/artillery.

To the dugout from the trench of the first line, there was a course through which the soldiers moved. 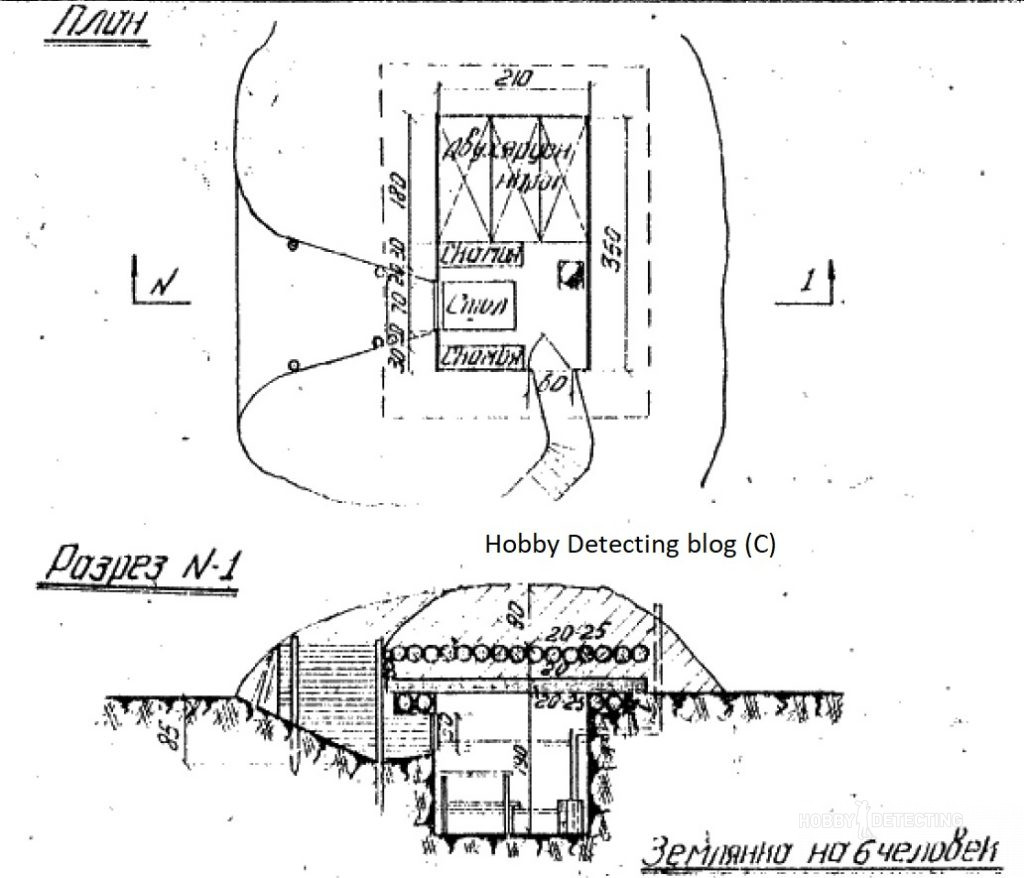 The scheme of the standard dugout.

As can be seen from the size – a rectangular dugout had edges of 350 by 210 cm long. It will take a long time to dig it, because its depth was 190 cm, while the overlap above the dugout added another 80 cm to protect personnel from the shelling of enemy artillery. Now, these dugouts are completely filled up and they have collapsed inward long ago, and if you see that there are almost no finds after a meter of digging, then the simple answer is that you are digging the ceiling, and not the dugout itself.

Another optional dugout, for a similar number of people. 400 by 250, already a bit more spacious. 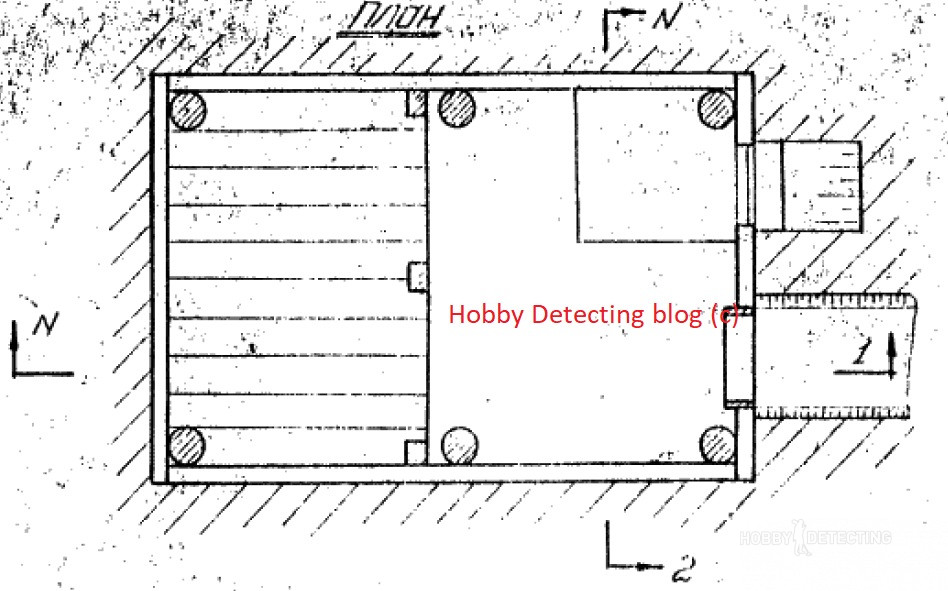 The design is very similar to the upper dugout, the bunks are located directly opposite the entrance. 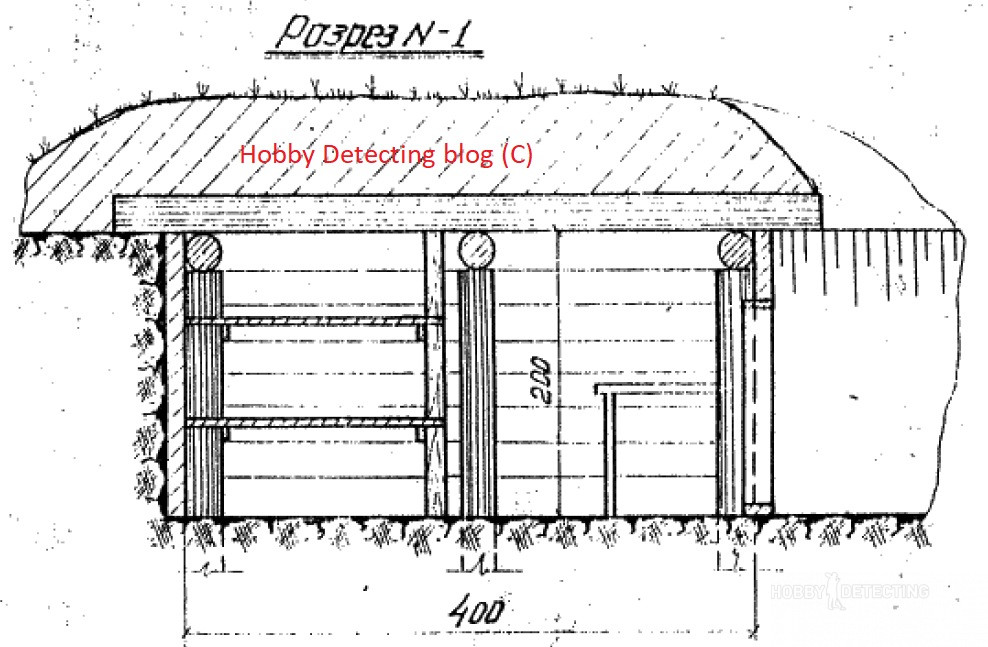 I understand that in the winter, the stove could be put on the place of the table or next to a table for heating the whole room. 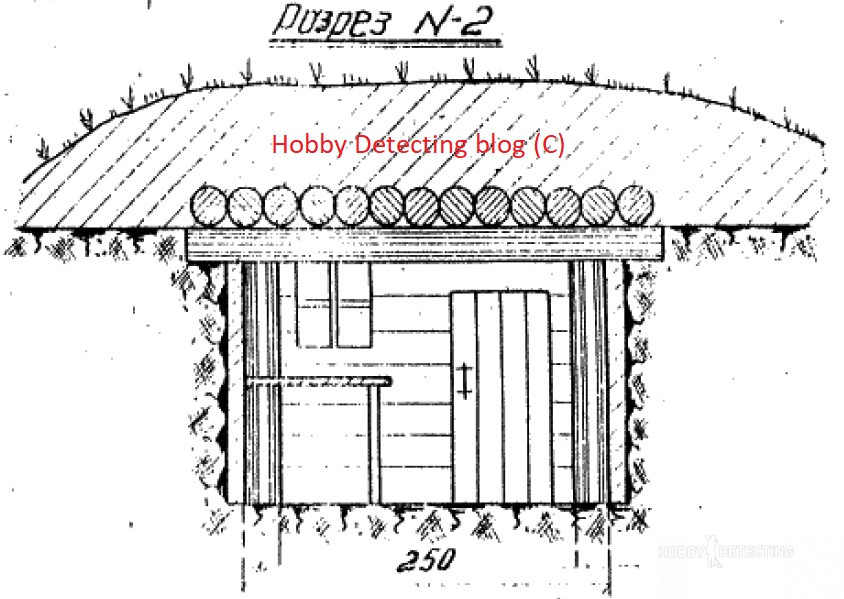 Interestingly, this dugout provides a place for a window. These could put away from the front line, on the second line of defense or even further.

These bunkers were arranged for 4-6 people. The overlap consisted of one or two rows of poles, a layer of roofing material of wood or iron and 0.20-0.40 m of dirt. In most cases, such dugouts were located in close proximity to the firing positions (machine-gun, mortar, artillery).

What were the dugouts for the officers?

There is no doubt that the officers receive certain privileges both on the home front and on the battlefield. This also applies to individual food and living too. 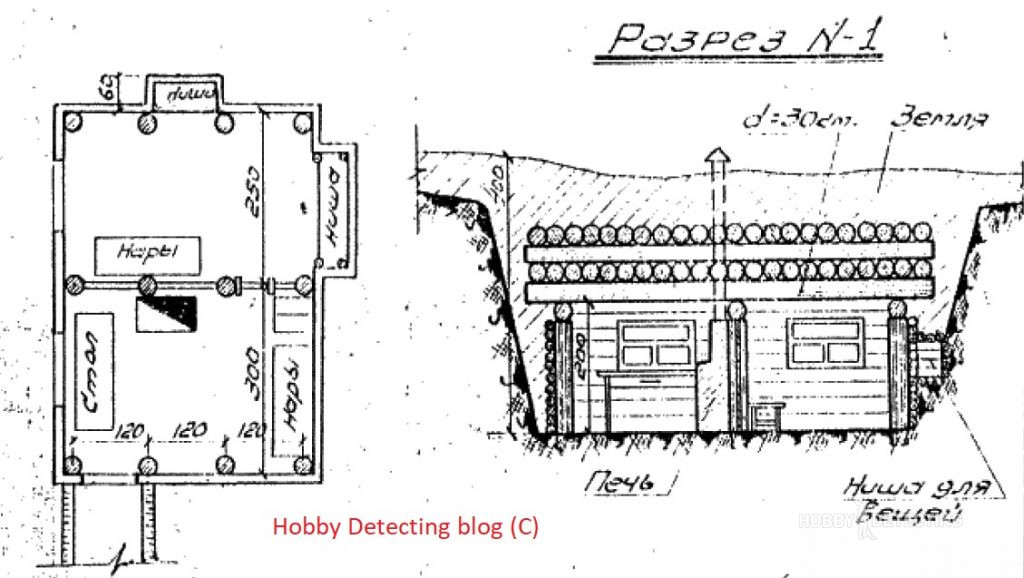 An example of one of the officers’ dugouts, 550 x 360 cm in size. The dugout is more spacious and has a place in it for 2 to 4 people. There is a separate table and a stove in the middle of the dugout and the dugout itself is divided into two separate “rooms”. An interesting feature is the presence of a shelf for storage. Logically, an officer’s dugout, like a garbage dump, should be the best in terms of possible good finds, especially if they were abandoned quickly or if it was destroyed after the forward avalanche of the Soviet Army.

Two windows are also present for daylight and room ventilation.

Dugout for a detachment

If there were no place for soldiers to live on the front line, then large dugouts were built for a whole detachment – 6 or more soldiers. They are like “mini-barracks”, but the underground type. 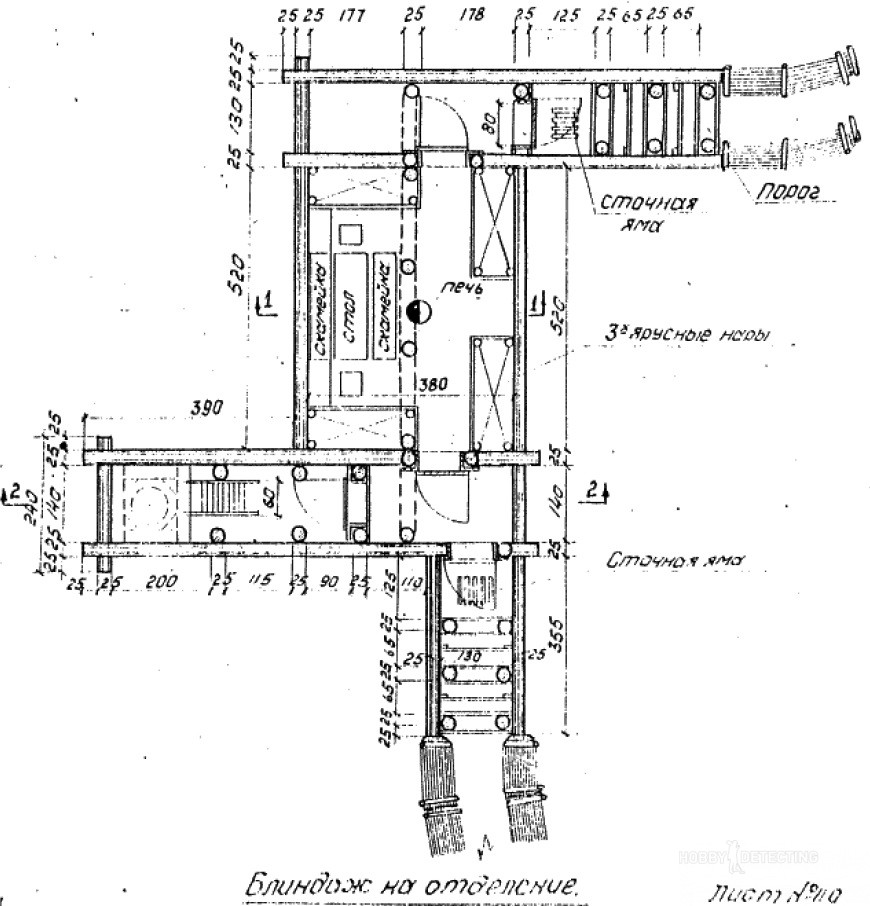 Such a dugout is much more difficult to excavate, based on its size. Curiously, I have not yet met such dugouts, all the positions that we have been on were either a dugout (built on the ground) or the soldiers lived in the field camp away from the front line. 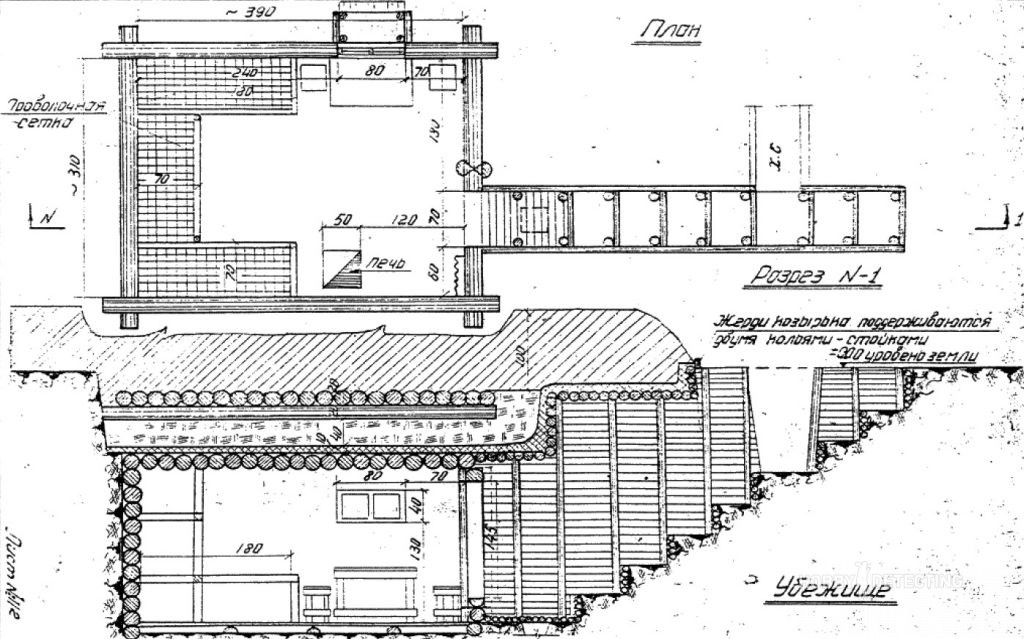 This was really a big dugout. Notice how deep it is (the height of the shelter is 195 cm), and above the shelter, there is an overlap of 180 cm. 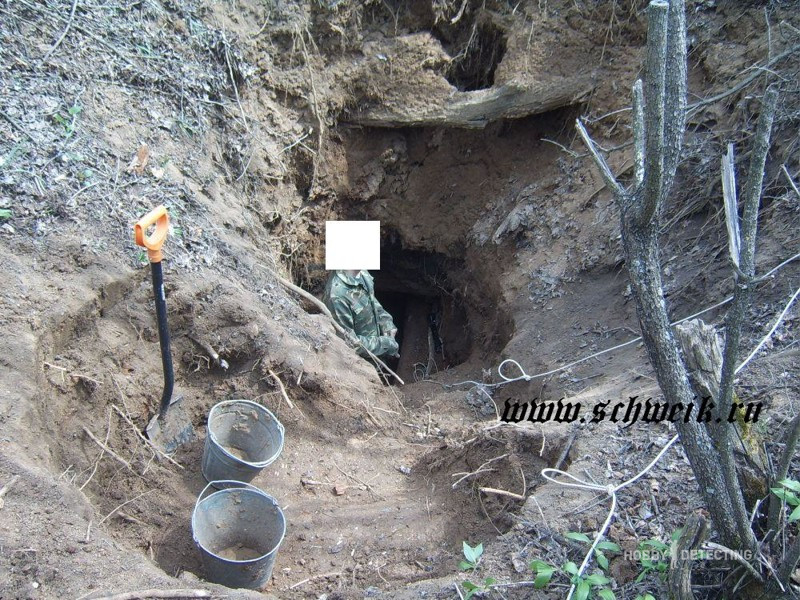 Here is a photo of a digger excavating such a dugout.

Summing up, I will say the following – these dugout plans is not something new or some great discovery. Everything is published for diggers who are just starting to master this difficult matter. However, it should be remembered that these plans are exemplary and created for clarity; in the fields and on the ground, the troops built a line of defense and shelters/dugouts/trenches based on the terrain and conditions, above all. You should always think and understand this, including in your head when working with maps on your future detecting locations.

P.S. Do you have something to add? If so, write it in the comments, the discussion of the topic will be no less interesting than the topic itself. Attach photos of your dugouts and trenches, this topic will be supplemented and replenished with new and useful information.