The Teknetics Patriot metal detector turned out to be an excellent detector! It has a good depth and it determines the finds pretty good, you can detect with it both in open fields and in trashy areas, it’s a pity that there are no small coils for it yet, but since I dig mostly in the fields, I decided to improve this metal detector with the purchase of an additional coil larger than the regular 11″ sized one. The choice fell on CORS Strike, which has a size of 12″ x 13″ because this is the best size for everyday detecting in fields and forests. It can cover a big area so you will have to spend less effort on covering the whole area. And most importantly this coil has a decent depth, but how did all this look in practice? 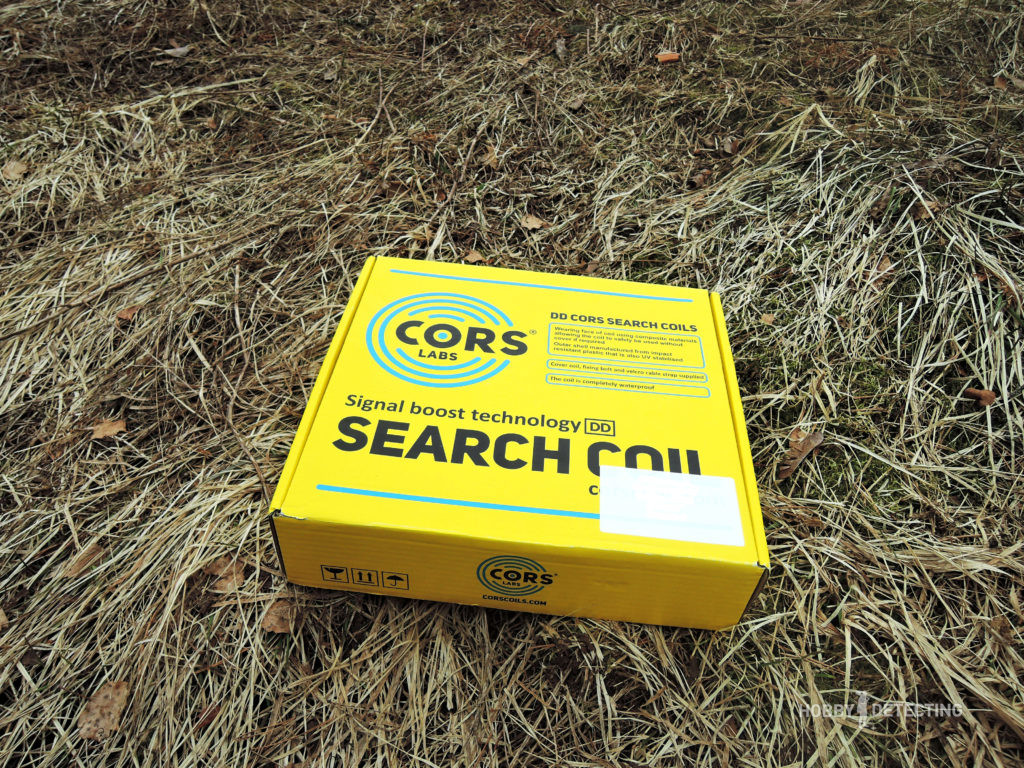 The coil arrived in a beautiful yellow box with the company logo and a description of the different advantages of their products. Not bad, to begin with. 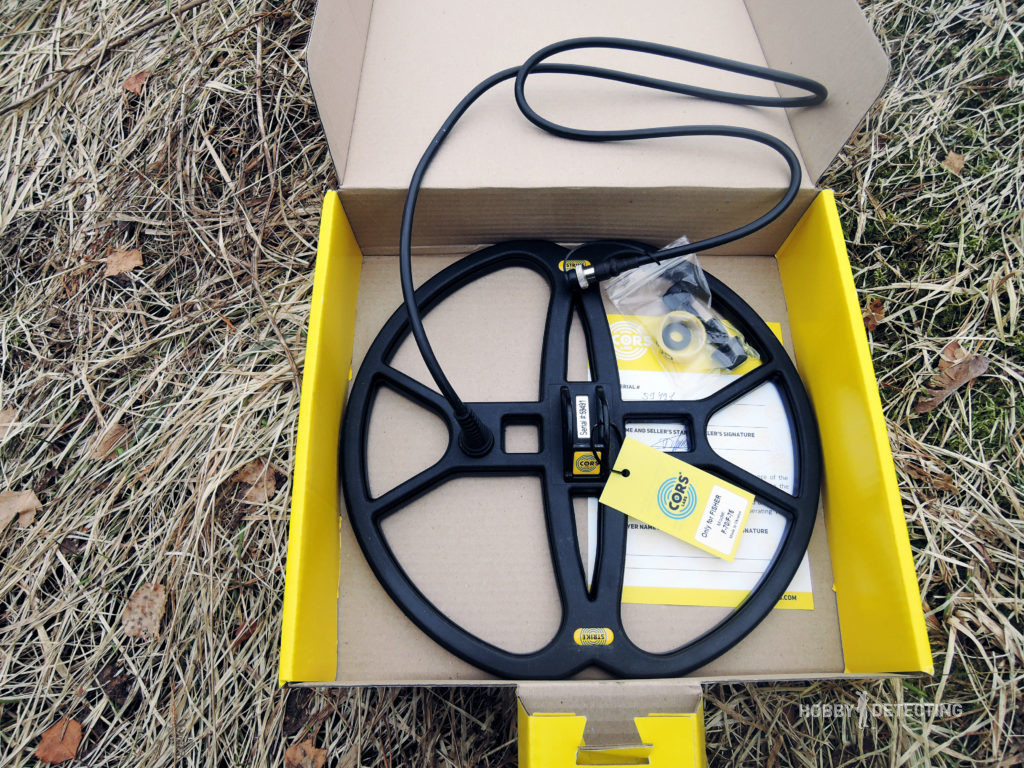 In the kit, you have everything you need – the coil itself, a warranty card, an additional Velcro strap for fastening the wire from the coil to the rod and a bolt for the coil with rubber seals, so as not to break the “ears” of the coil. 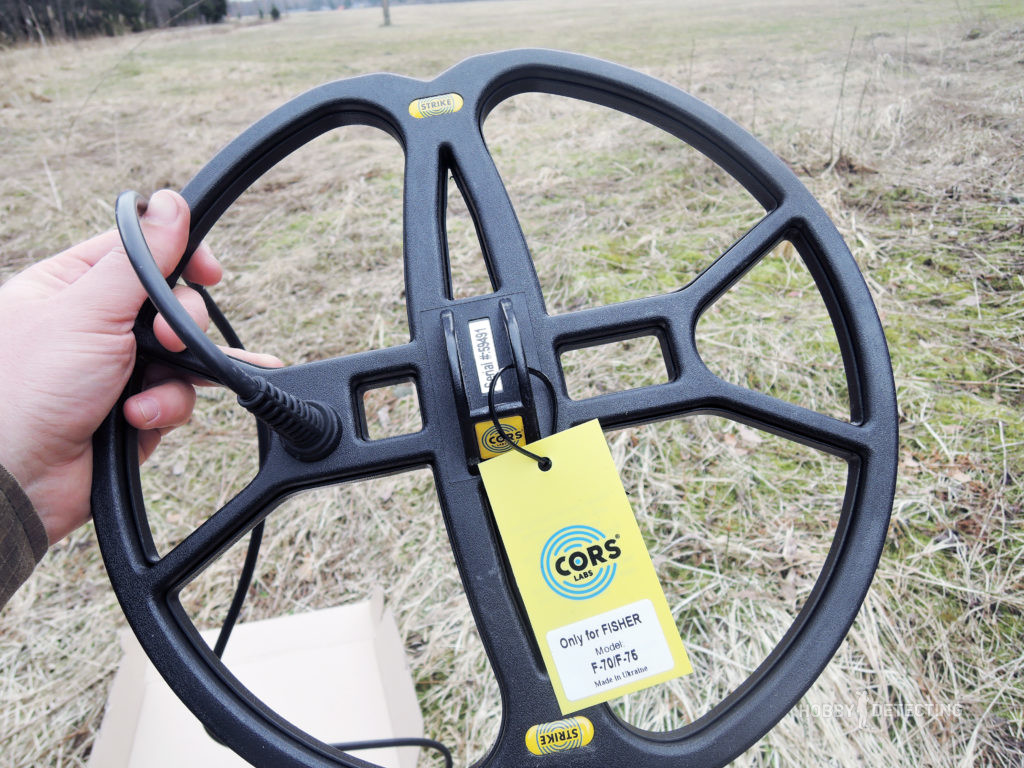 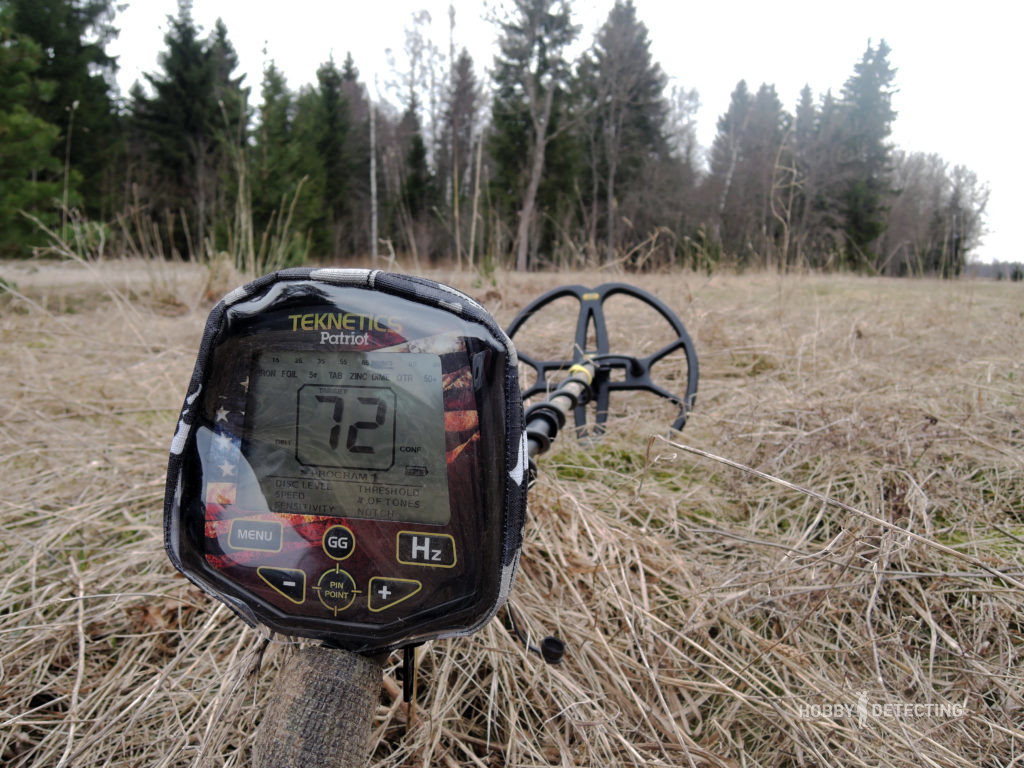 The coil is good and simple, the wire tightly wraps around the stem and sits well on the detector. 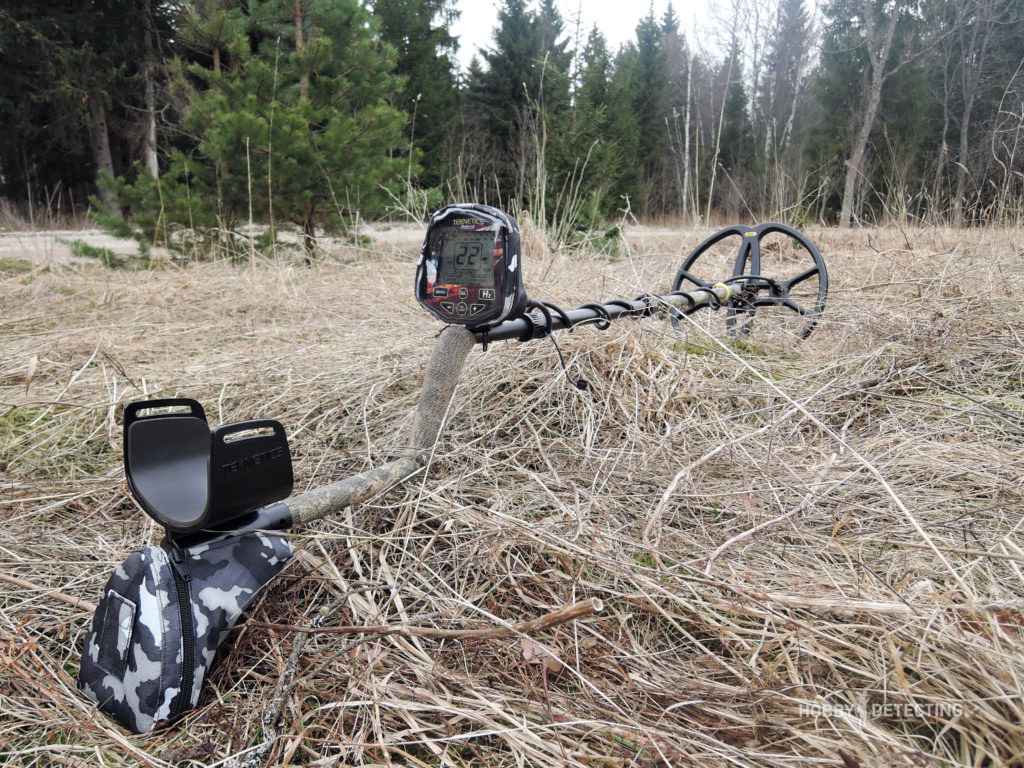 As you can see in the photo above, the coil fits perfectly to the detector. 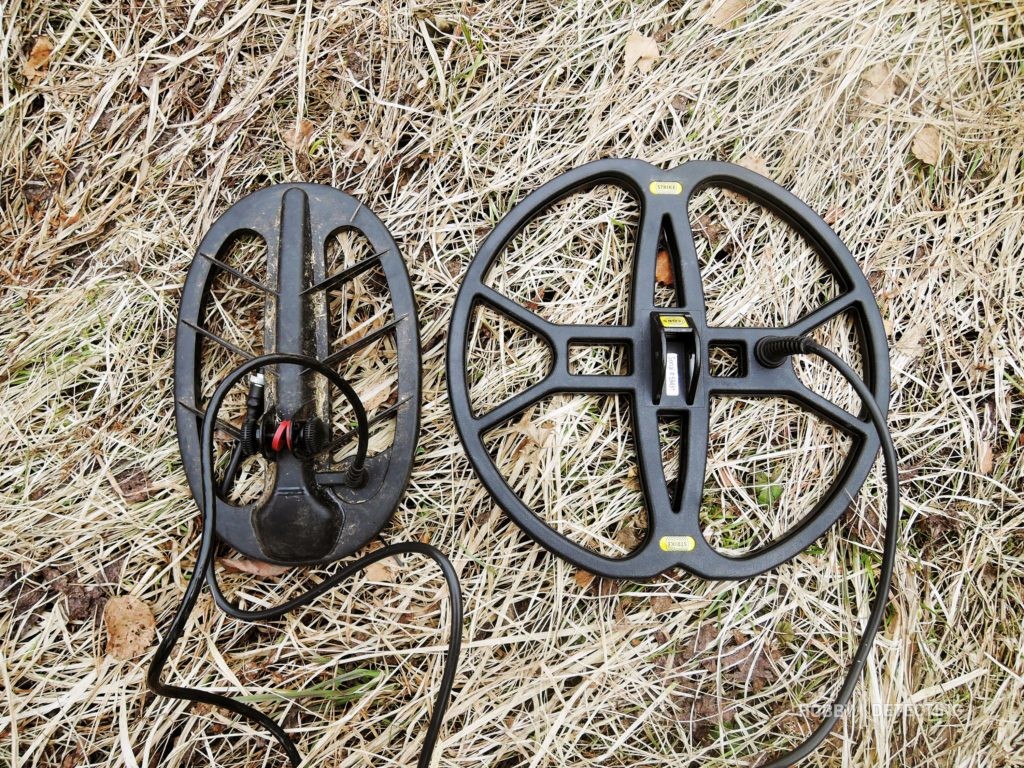 The CORS Strike, compared to the other coil, of course, strikingly stands out! It is much wider, and a little longer. The depth should also be good, so we will check that out.

For the first detecting trip, I chose a field on which I have already detected several times before. I call it “The field of Miracles” because there has never been a single trip to this field where I have returned without coins. I have found all kinds of coins on this field – including old silver ones. They usually are at a shallow depth, but the soil itself is rather stony and complex, which means that if it gets plowed someday, mountains of coins will appear again. According to my impressions, there used to be a small village on this field, because the fields around are empty, and this field gives excellent finds from year to year. Precisely every six months I visit it to collect the coin crop that awaits me, and so I did this time. 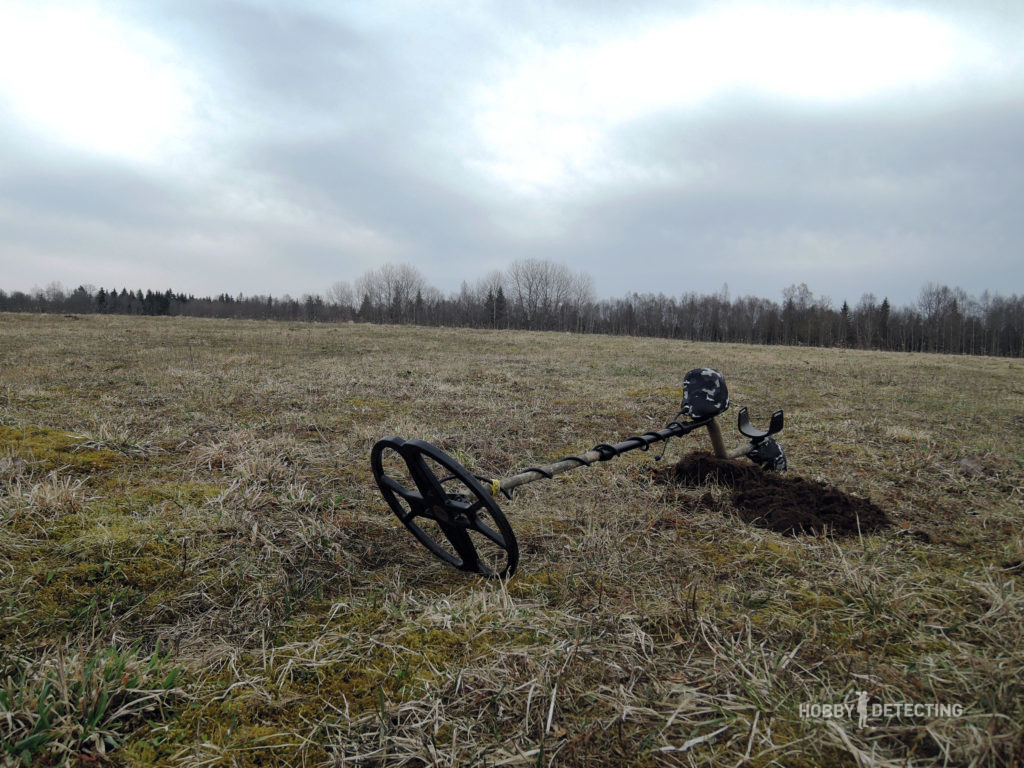 I decided to go from the very end of the field directly to the money spot, in order to collect most of the finds. The coil I now used is large, I can cover a larger area of the field.

As expected – in the spring the field was full of water, the soil was wet and the detector began to operate unstably. Therefore I reduced the sensitivity to 85-83, put the ground-balance lower, to the level of 40-50, and the detector started to work much more stable. This field is not an easy one and it simply doesn’t want to give away its finds, so you really have to work for your finds! But they only appear for stubborn detectorists who know perfectly how to properly adjust their metal detector and use its capabilities 100%.

The coil worked perfectly, it did not give false signals, thus no problems. The Teknetics Patriot wasn’t heavier because of the coil, and the balance of the metal detector did not change – it was still convenient to swing it from side to side and look for useful signals. 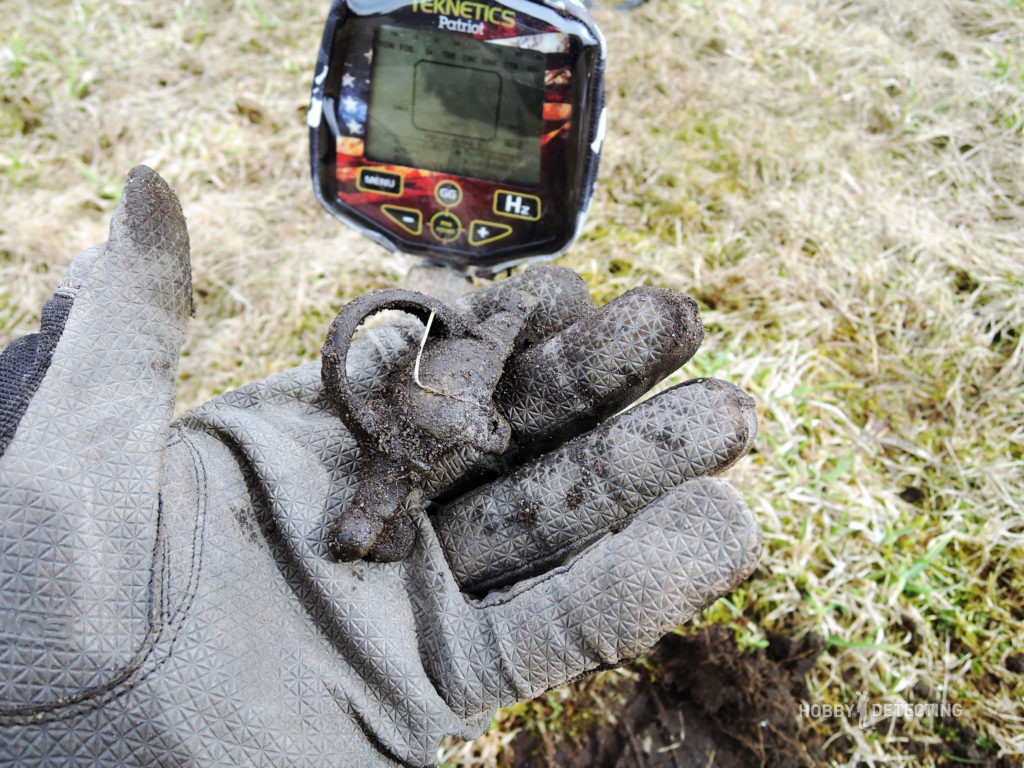 And the first thing I found was a still unidentified object. If you know what it is – write it in the comments!

Then, not far away from this incomprehensible find, an interesting signal appeared, deep and small – a coin maybe? 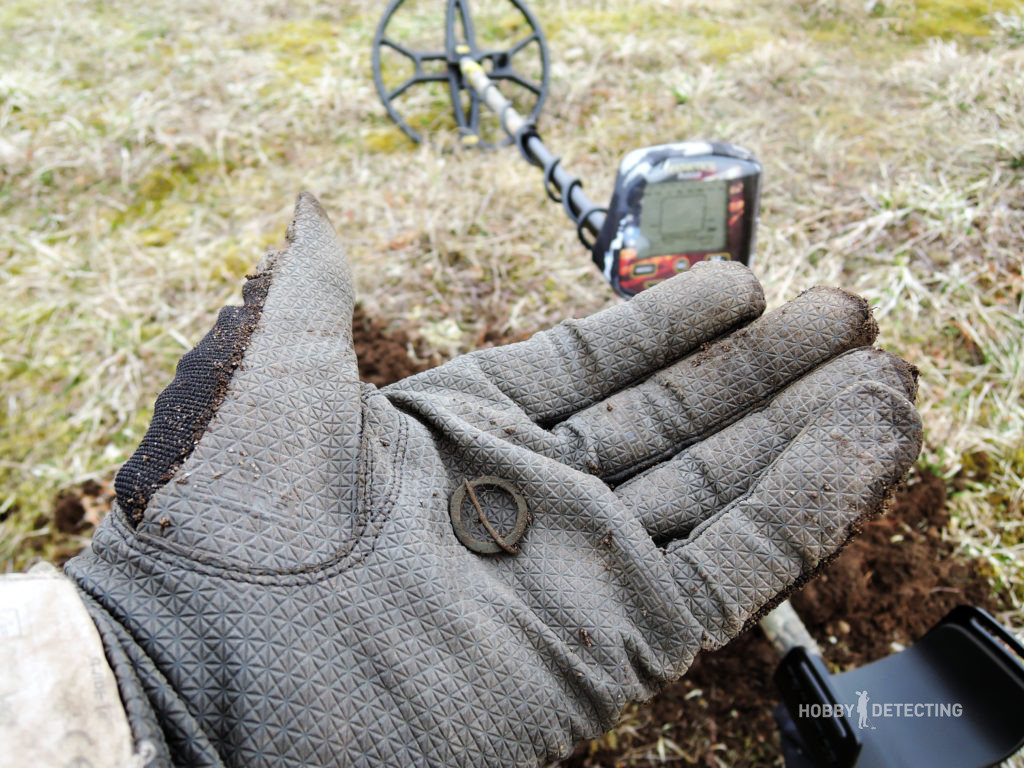 But no, the small and deep signal turned out to be a small buckle. This is also an ancient find, it is over 100 years old.

But where are the coins? Why did I come to this field?

After a while, coin signals begin to appear. I got a signal, and I dug it. 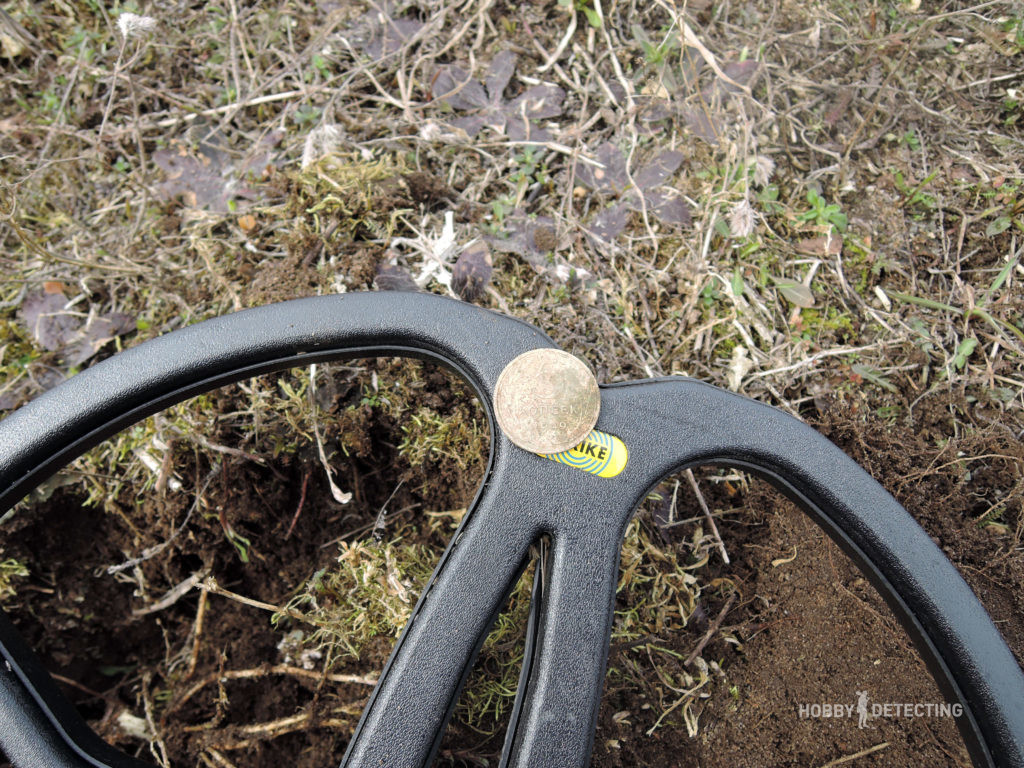 From the depths of the field, I pulled out a 5 kopecks coin from 1949. An interesting find!

I walked on for a while, but without any results.

Unexpectedly, the Teknetics Patriot gave a soft signal. I could see that the signal was weak and deep. This coil really conquers the depths. In comparison with the standard coil, this progress is immediately visible and obvious.

The VDI was around 89-91, and that was good. The depth was almost 28 centimeters – I dug for quite a while, and then I found it: 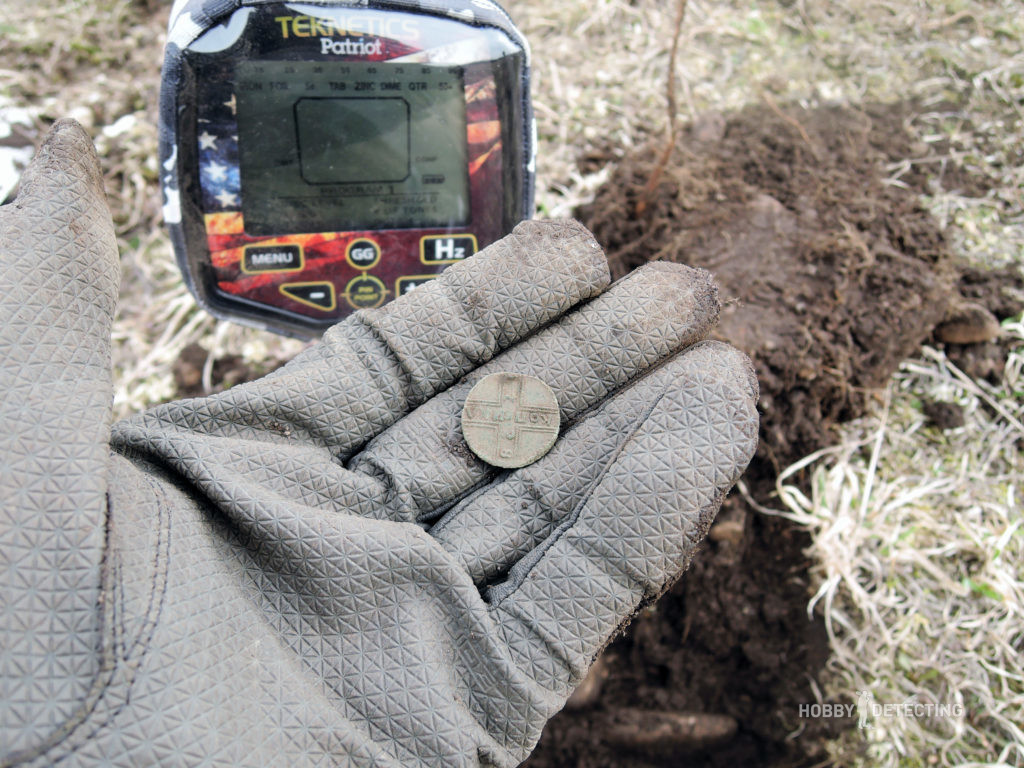 It was a so-called “Cross-kopeck” coin from 1728! A rare coin, as such coins were minted only two years! And then they were withdrawn from circulation and melted into other coins. 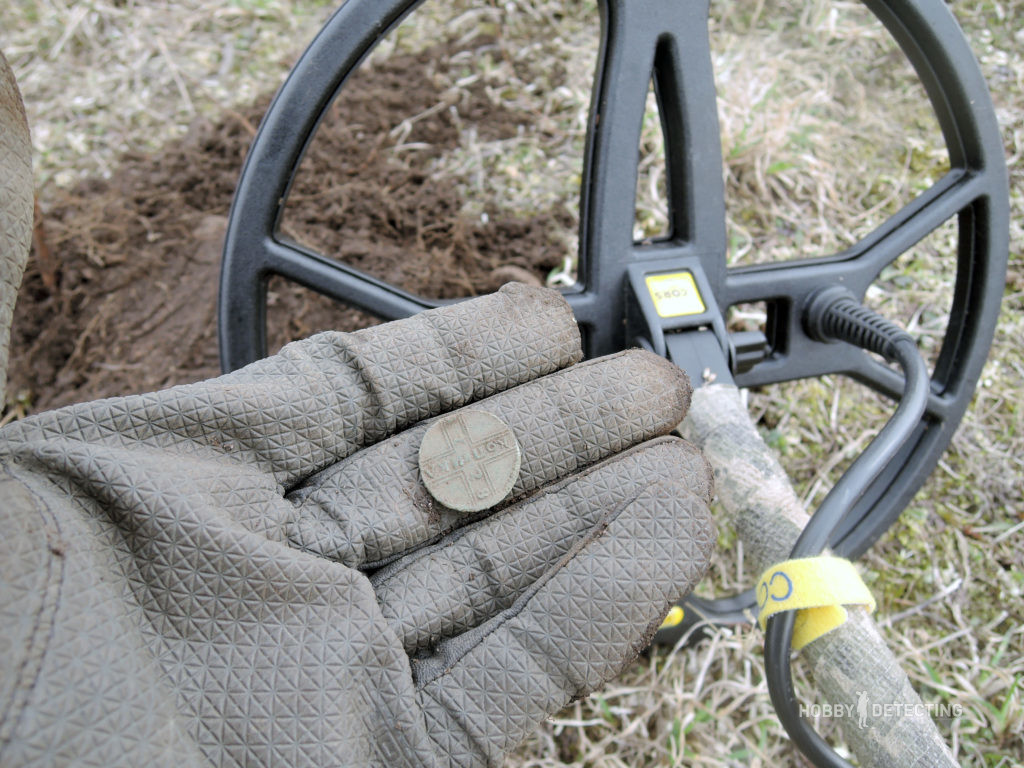 The cross was not the “common” type – after studying it, it became clear that it was even rarer than a regular cross kopeck. Even though all these coins have the rarity degree of R1,  this one turned out to be a subtype too – the word “MOSCOW” was present on the coin, rather than just an ordinary cross. This coin is estimated to be worth about 200 euros. That’s how it is in our business – you go detecting with a new coil and the fields bring you a good find, and that’s worth it! Not thousands of euros, of course, but 200 is quite good!

A silver coin would have been good too, but I was still pretty happy.

My friends also found some interesting coins. Various coins, for example, a “Denga” coin from 1812 and other copper coins.

I also had another coin signal. It was quite stable and shallow.

And then the incomprehensible happened, I do not even know what to call it – mysticism, or a miracle?

While my friends were spinning around in search of coins and other useful signals, I suddenly stood up, took the detector on my shoulder and the shovel in my hand and left the field. I walked for 400 meters because I wanted to go outside the old fence, which separates the field from the forest and go into the forest to see what I could find.

I crossed the fence, went into the woods, and started swinging my detector. There was an absolute silence, nothing. Therefore I decided to go further to see what I could find in the little clearing near the road.

I went there and began to detect. I took a couple of steps and suddenly, next to two small trees, I got a strong signal with a VDI of over 98-99, this was obviously some large metal object on the surface.

I lifted the moss in the clearing with my shovel and I saw a round-shaped big copper object. 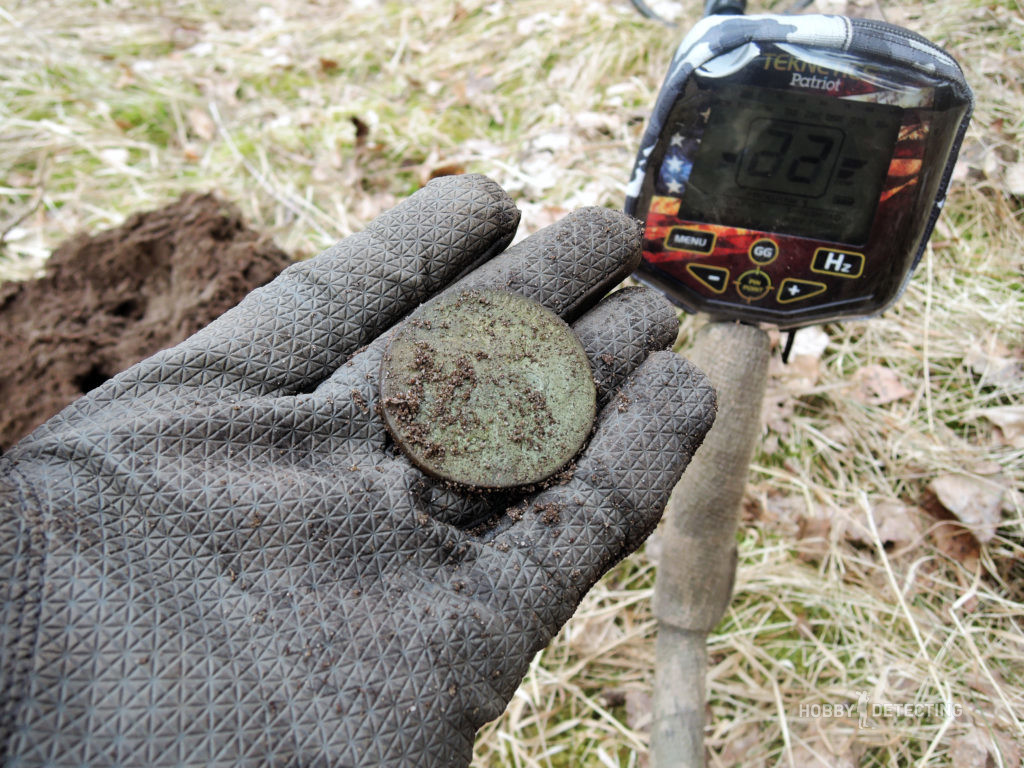 And what was this object? Every detectorist in these areas knows that this is one of the most pleasant finds you can have: 5 Kopecks from the times of Catherine the Great! This one was from 1793, and that was just a few years before the death of this Great Empress. This coin is huge and such a find can be made with any detector, even the pinpointer would have given a signal if it is driven along the ground. 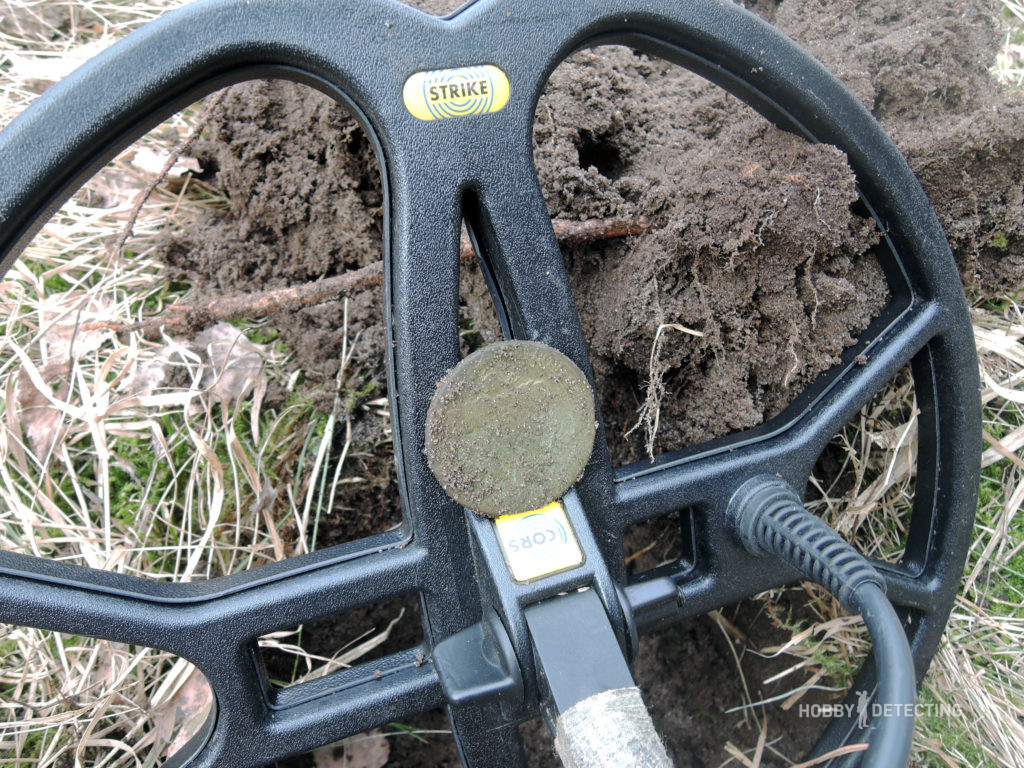 I parked my car right next to the spot where I found it, well, thirty meters away, and all this time the coin just lay there! A simple miracle!

There is no limit to joy, it would seem. And then it was time to go home. The whole day was not in vain and it brought a lot of finds.

The Teknetics Patriot with a new CORS Strike coil did not fail. 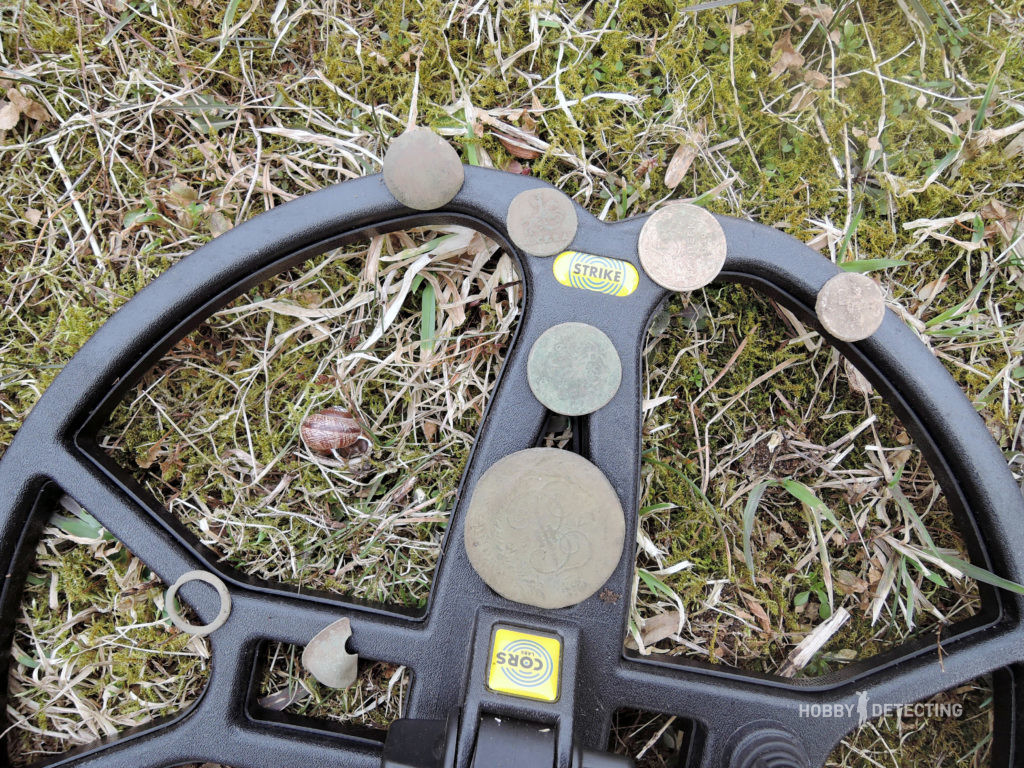 In general, the number of finds was quite small, but this is understandable, that field had been detected for three years already! But the quality of finds today just exceeded all expectations – a rare cross coin, and a huge coin! 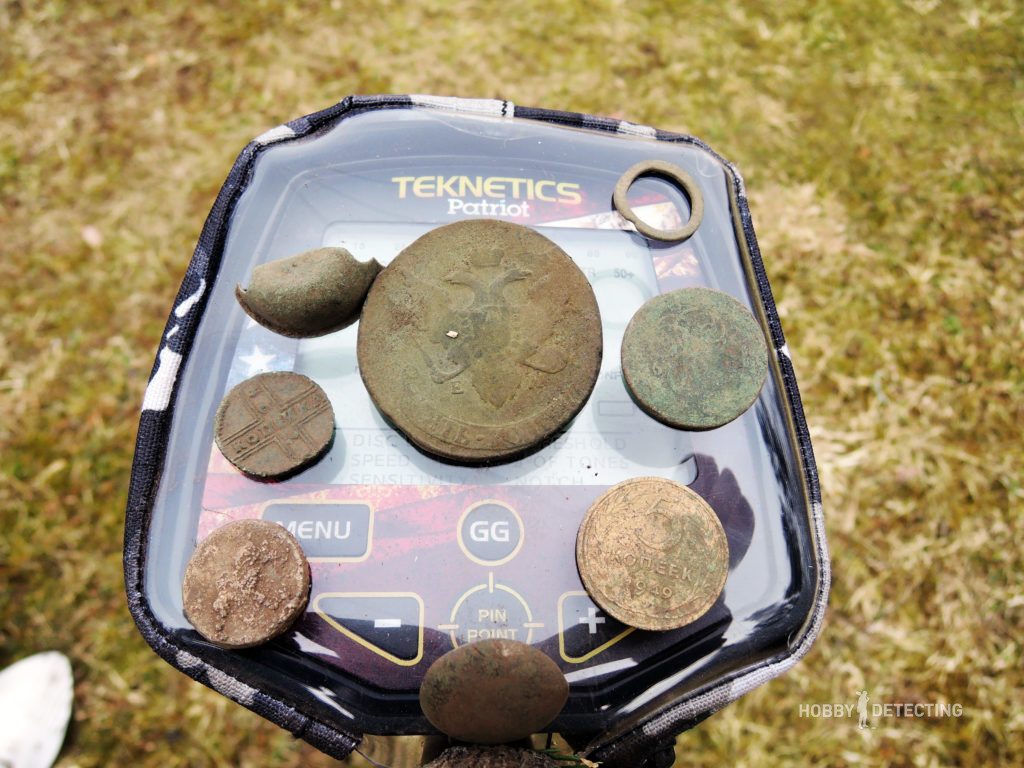 One of the big bonuses in that field is that the coins appear in excellent condition!

About the coil, I will say this: it replaces the regular coil perfectly! Digging in the fields and in the forest will be easy, as this coil gives a large detected area and a better depth. It is light for its size, it does not overload the hand, I was digging with it all day and it was no big problem. I recommend it! The result surpassed all expectations!

It is definitely worth it to go back to this field again someday, who knows what more awaits?