This morning I decided to take my final detecting trip of 2018, so I packed my bags and went outdoors. I didn’t start off the day quite early as I usually do; it was already quite bright outside. There was not much snow, but the cold outside has been standing still for a long time, more than three weeks. The guys who went detecting to the fields quite recently said that the soil there is like reinforced concrete – you won’t break through it with anything, it was frozen tight. Local fishermen shared information that the ice on the lake is already 9 cm thick, and this is not a joke. Therefore we decided to go detecting in the woods!

We arrived at one place, and there a group of 9 cars was already parked. Are there competitors here? No, everyone was in yellow vests, obviously hunters, chasing animals in the forest. We did not want to be shot down, so we went to one interesting place in the middle of the forest, which in old times was marked as a “forester’s house.” 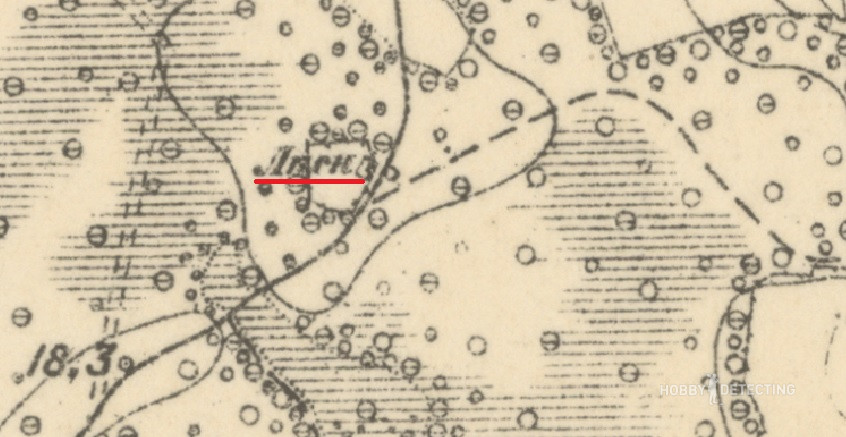 Of course, this place was of no particular interest to detecting, because according to the conversations of many detectorists from this area – this place was already detected many times, last time when I was driving through the forest in the summer, I swore that there was nothing there. “Okay,” I thought, “I will come back one day.” And I came back.

The next barbaric picture appeared in front of my eyes – the whole forest was cut down clean, only a few fruit-bearing trees were left for further natural plantings. 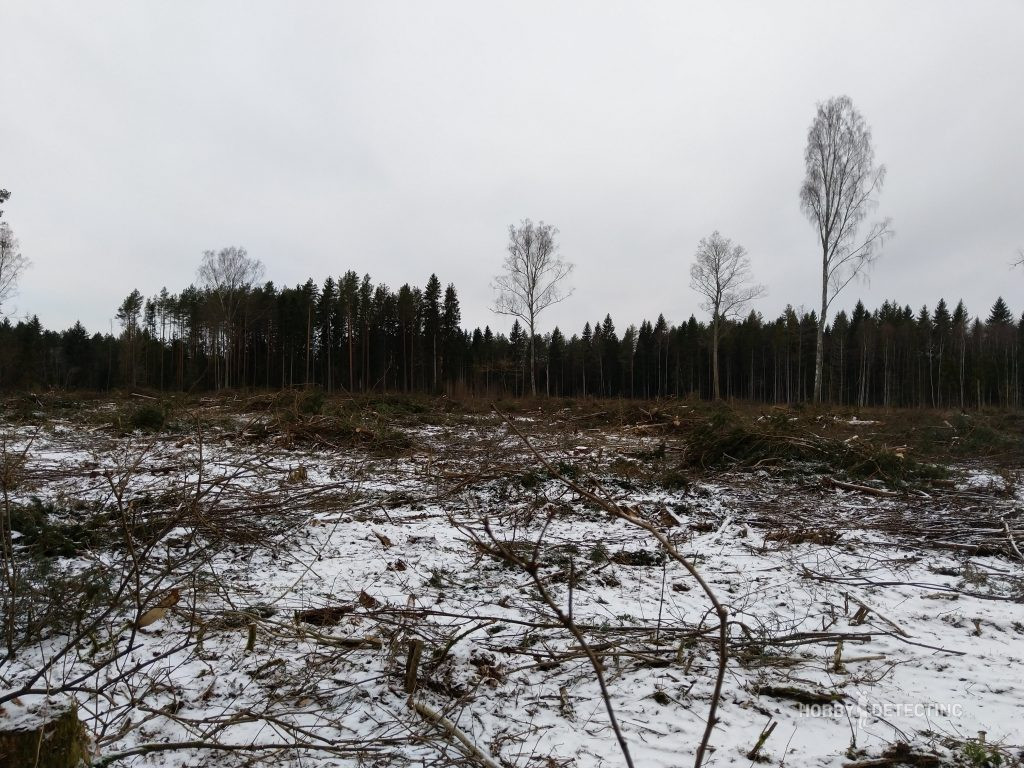 The point itself I barely recognized, and that, thanks to the roads. 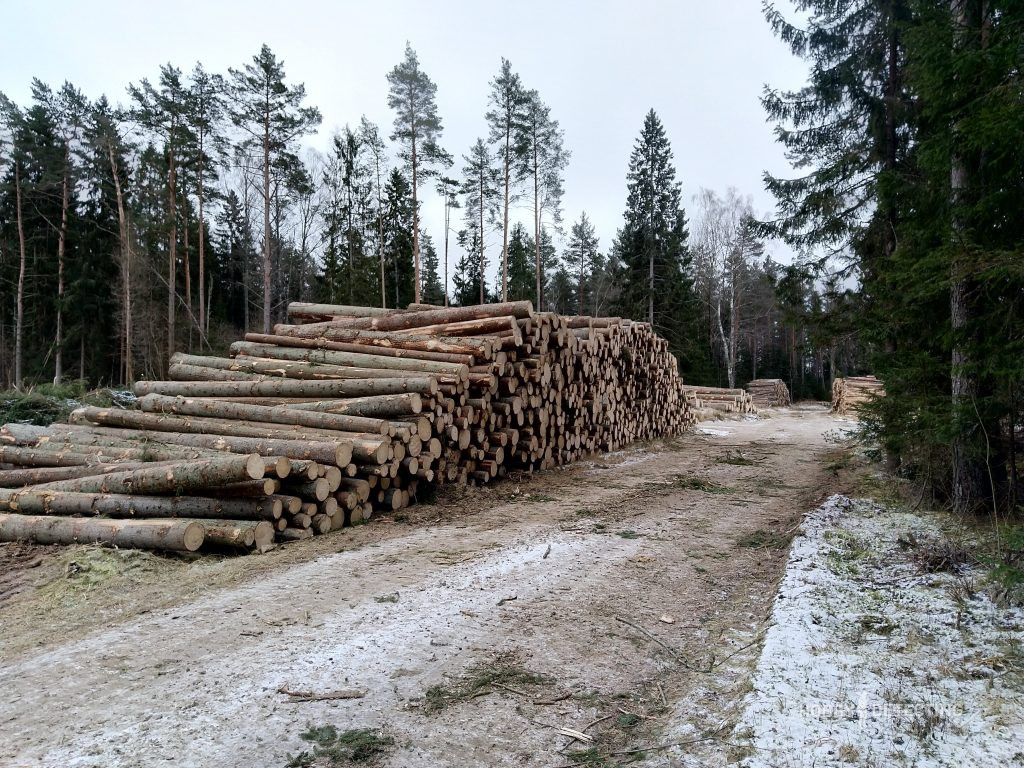 Everything around was littered with logs, ready for removal. 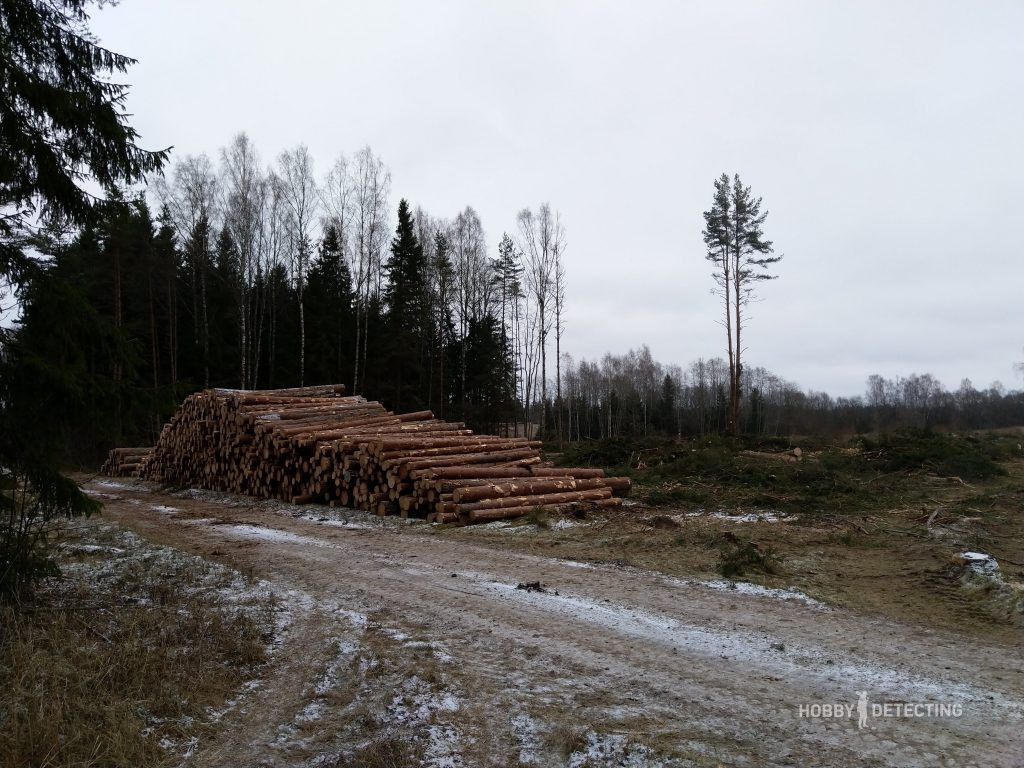 It is sad to observe that the national wealth is sawn down in such a way. 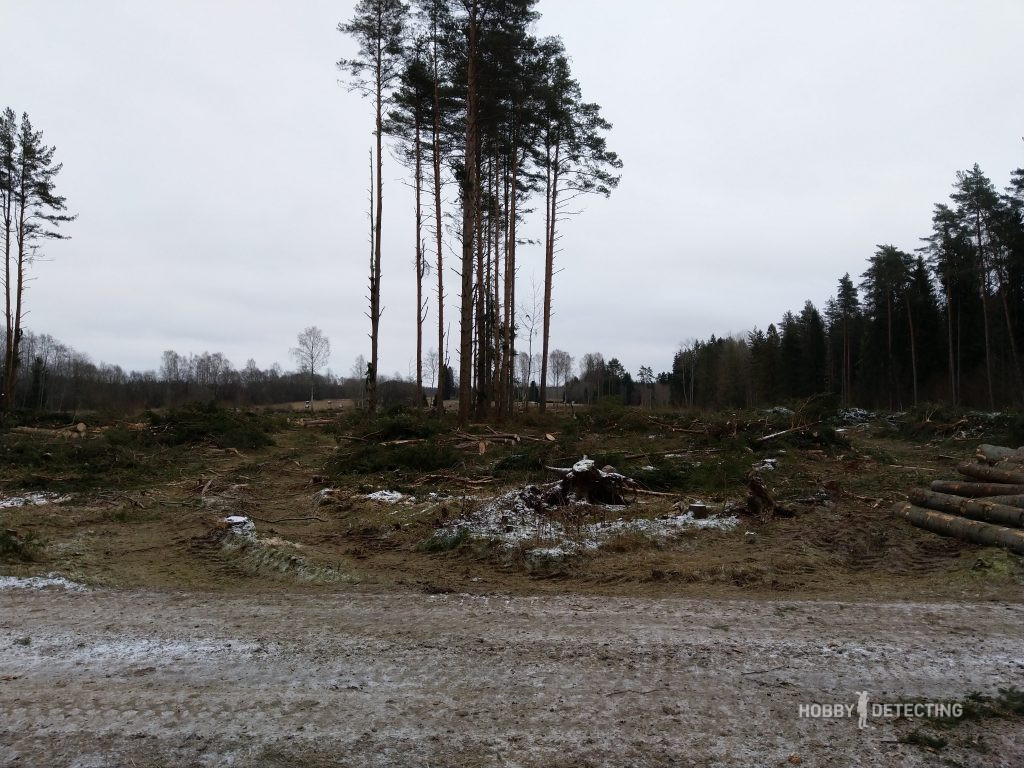 But this has its advantages because the place that we saw on the map above was always overgrown with shrubs and trees, and there used to be a lawn with a house there. Obviously, if the place was cleared, there will be new finds there. 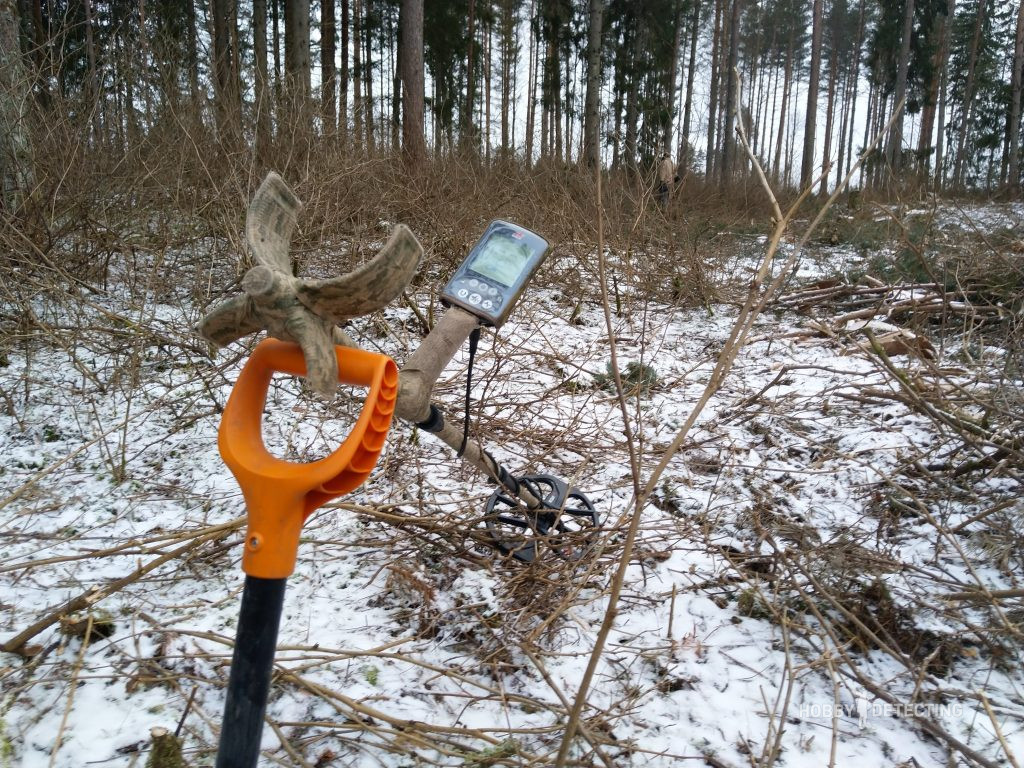 There was a lot of shrubs also this time. The place was chosen correctly – a hill along the road in the middle of the forest, with a visible house pit on the site. This place should really be excavated some time, in the dump of the ditch there could be seen tiles, ceramics and old bricks. As they say, there were a lot of coins found here too, and old ones too, which means they lived happily ever after. 🙂

The bushes were no big obstacle; in the winter they are dry and break down quickly. 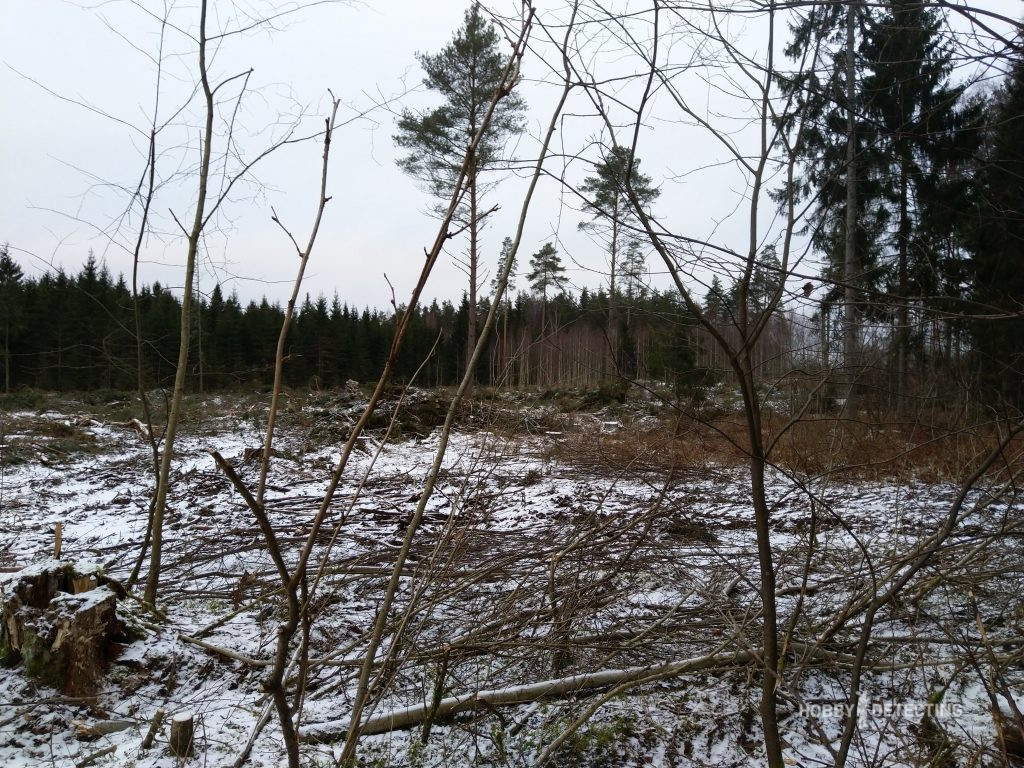 Behind the bushes, there was a view of a huge empty place. What is interesting is that on the ground in the woods solid signals from iron appear sometimes. This place has experienced a little bit of war and its consequences are still visible – small foxholes and dugouts and in some places even convenient trenches for 5-10 people. Bullet casings are often found, but this place cannot be called the “valley of death”, there were only small shootings happening here, but it did not come to stubborn resistance. 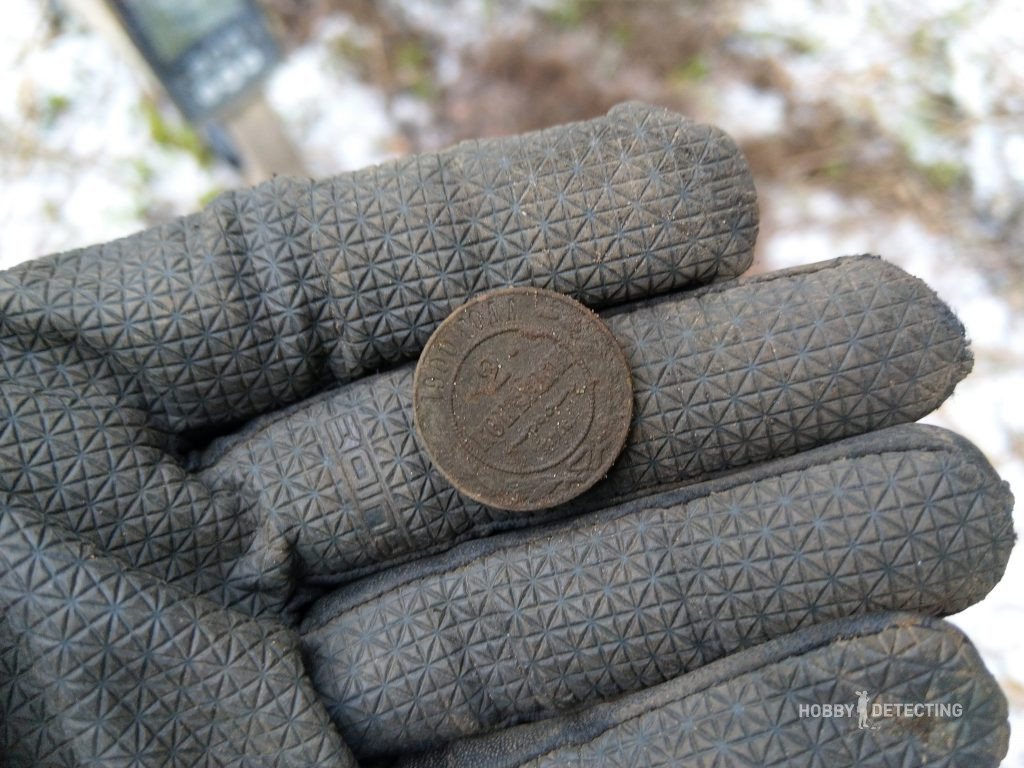 Finally, the shrubs gave up a nice find – a beautiful 2 Kopeks coin from 1900 lay at a shallow depth. The condition after cleaning it up was quite amazing, I got the feeling as if this coin was placed there yesterday in the moss and left to lie for all 118 years. 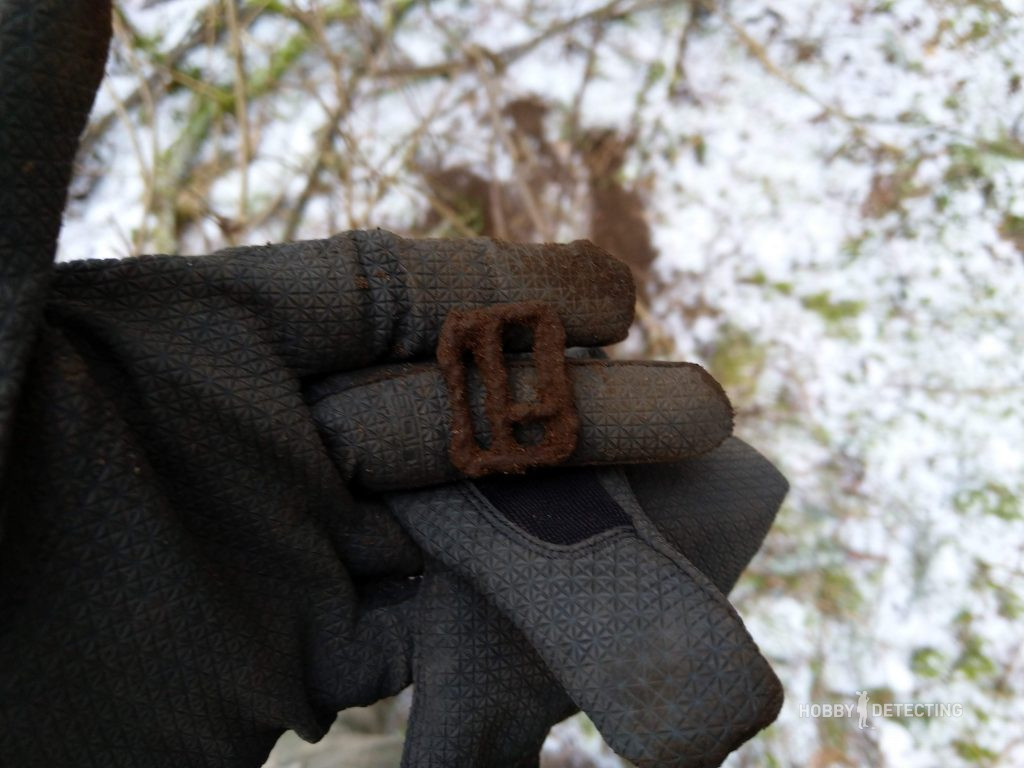 There was a bit of metal in this place too, one buckle, very beautiful. My friend even found a copper ring! Interestingly, all the finds were not deep and on the surface. 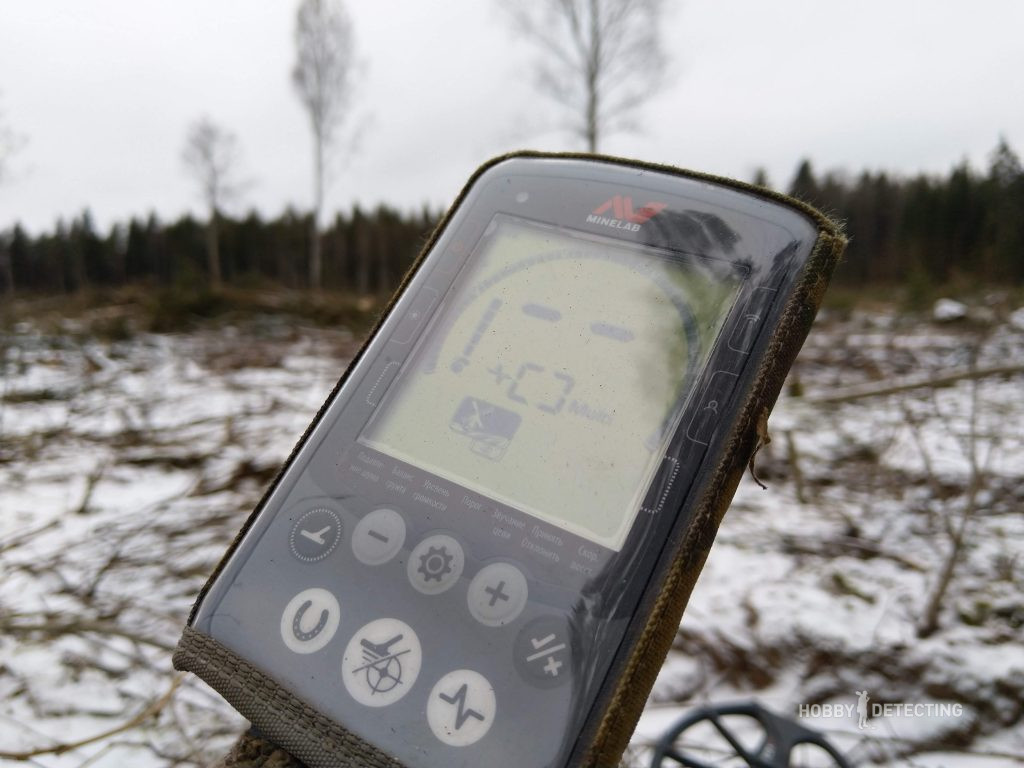 I thought that next time I’ll have to come here with a small sniper coil and make a small excavation. I like this thought even more fro every day, and now this thought now does not give me any rest! 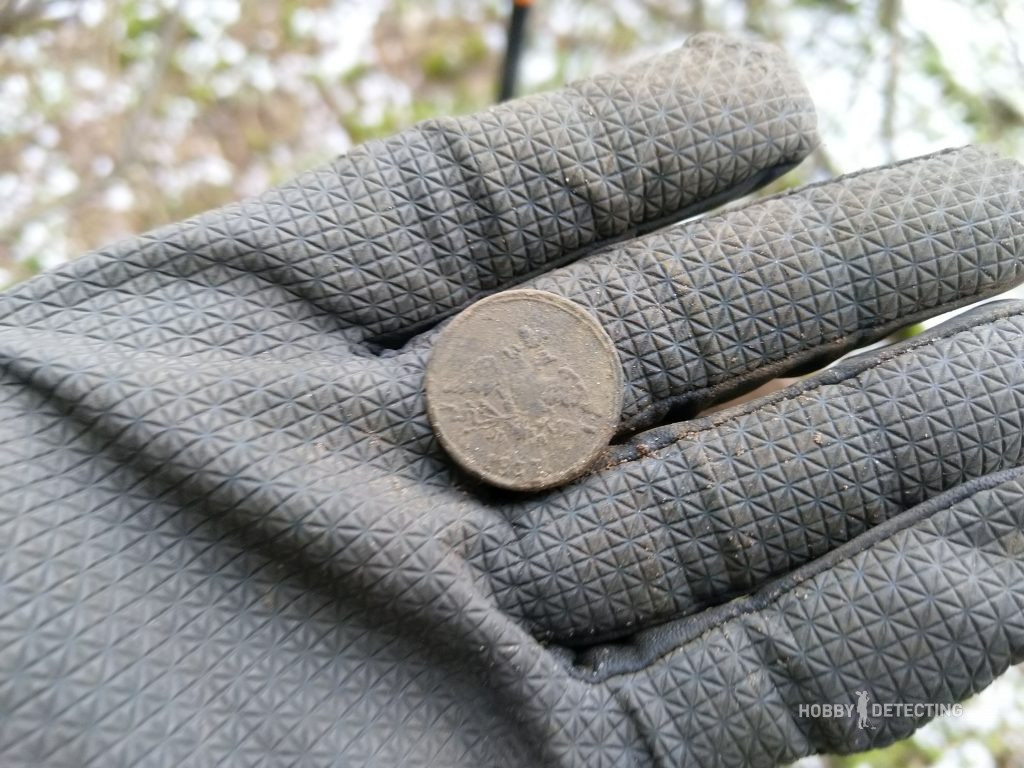 Another coin signal was heard in the bushes and I came across such a beauty – a Kopek coin from 1837. This one was in excellent condition, it will be necessary to wash it off a little and put it in the collection. 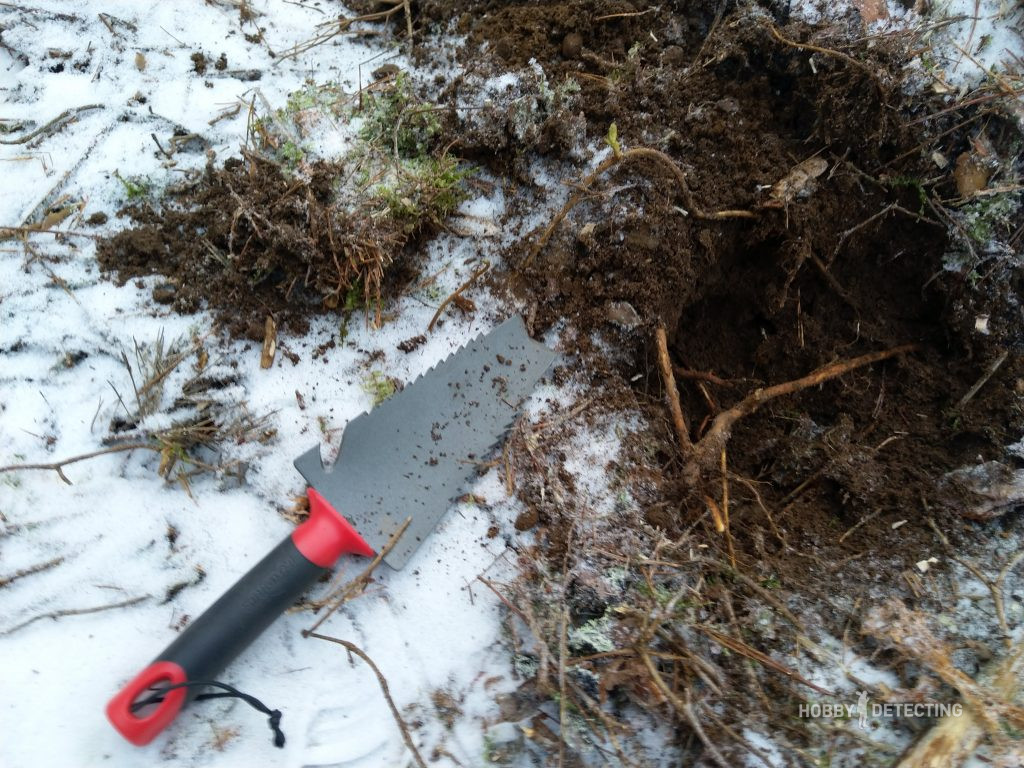 By the way, among the roots in the woods, it helps to have such a metal digging tool. I left my plastic scoop in the car, it is good in the fields, but cutting the roots is neatly more convenient with just such a thing, and you are less likely to scratch the find – with a shovel it’s much easier to do that! 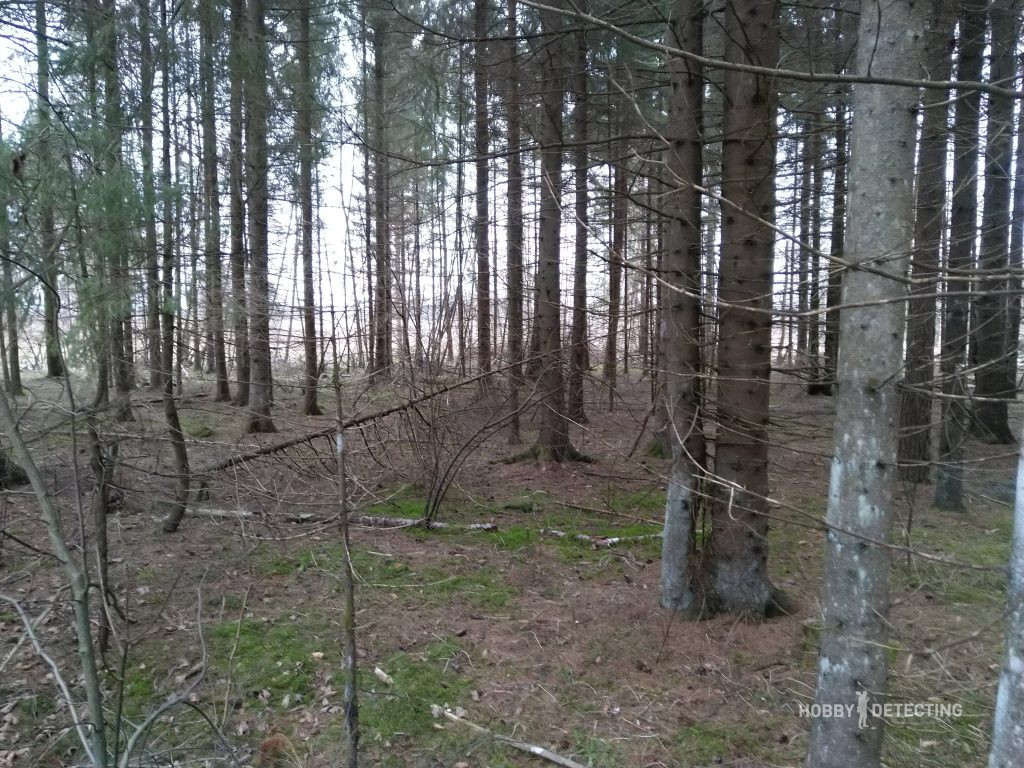 Not far from the forester’s house there was still a small forest that I wanted to search through, too, just in case. 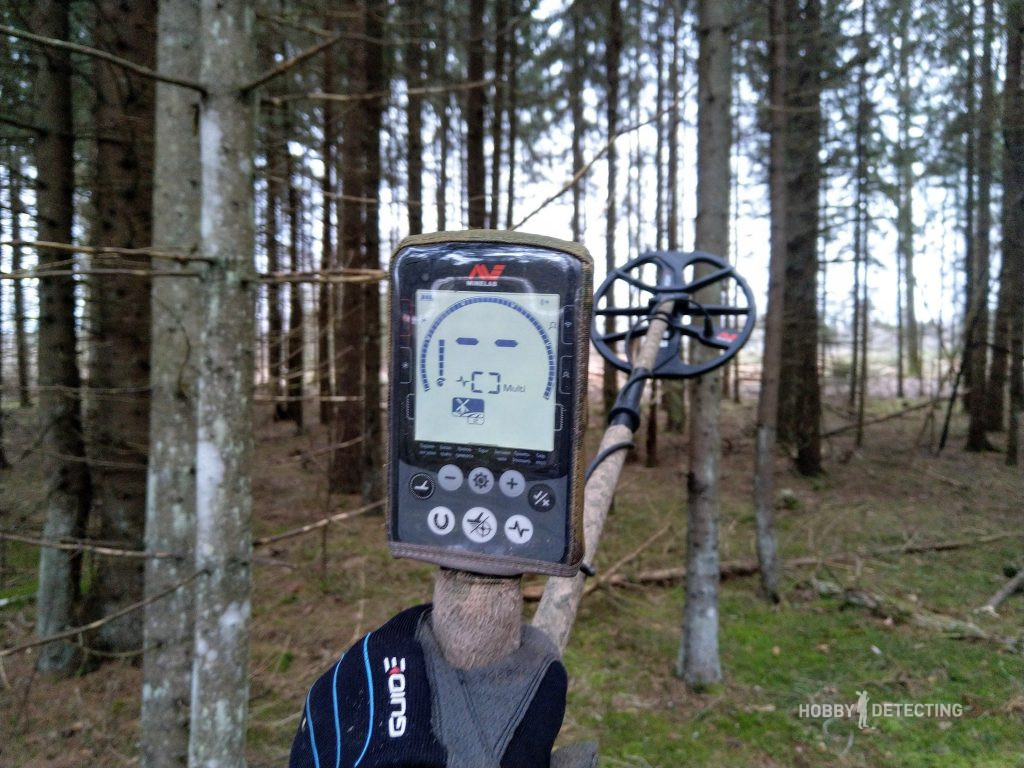 It is beautiful in the winter to walk in the woods – the air is fresh and pleasant, silence, only the pines and firs rustle. It helps to take one day off from all the urban everyday life! 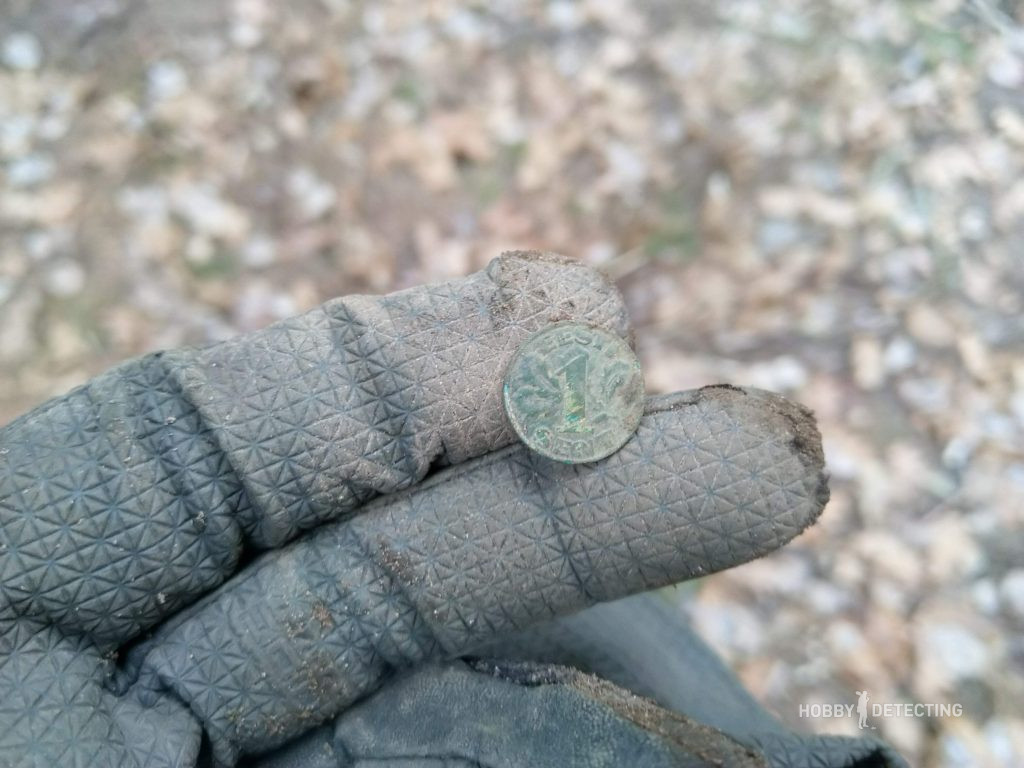 And the forest brought a good find – 1 Kopek from 1932. Not old, but also a nice addition to my collection.

In the woods, you can still dig at this time of the year! I don’t know if I have time to dig a little more in the next year or not, we’ll see. But I congratulate everyone on the upcoming New Year and good luck, friends! In the New Year, there will be detecting and there will be finds! 😉