Digging The Forest With The Fisher F44 (Diggers Story, Photos+)

I rarely make full reports about detecting, because I often tell about an interesting find. But today it will be a report about what I liked with my result.

On a day off, four of us left in the morning to one promising forest. That area was interesting because there they have found a lot of different objects of the Cossack times.

The forest I was planning to detect in, I visited last year. We detected and, for 4 hours with two metal detectors – not a single sensible find! But this time we were going to the right place, where one of the fellow detectorists just now was, and found house pits.

But, before going to the forest, my companions decided to explore the meadow area opposite.

They landed in a beam with steep slopes, at the bottom of which the remnants of a stream could be traced in places. The place was wide and fertile, so cows were there every day. But now there was no one, therefore, having collected the metal detectors, having breakfasted, we slowly shuffled along the beam.

I will dwell a little about the detectors with which I went detecting: two XP Deus, the detectors had the same coil, but the firmware in them was probably different (the owners do not remember exactly), AKA Sorex with 15 ” coil; And me with the Fisher F44 + Nel Storm. 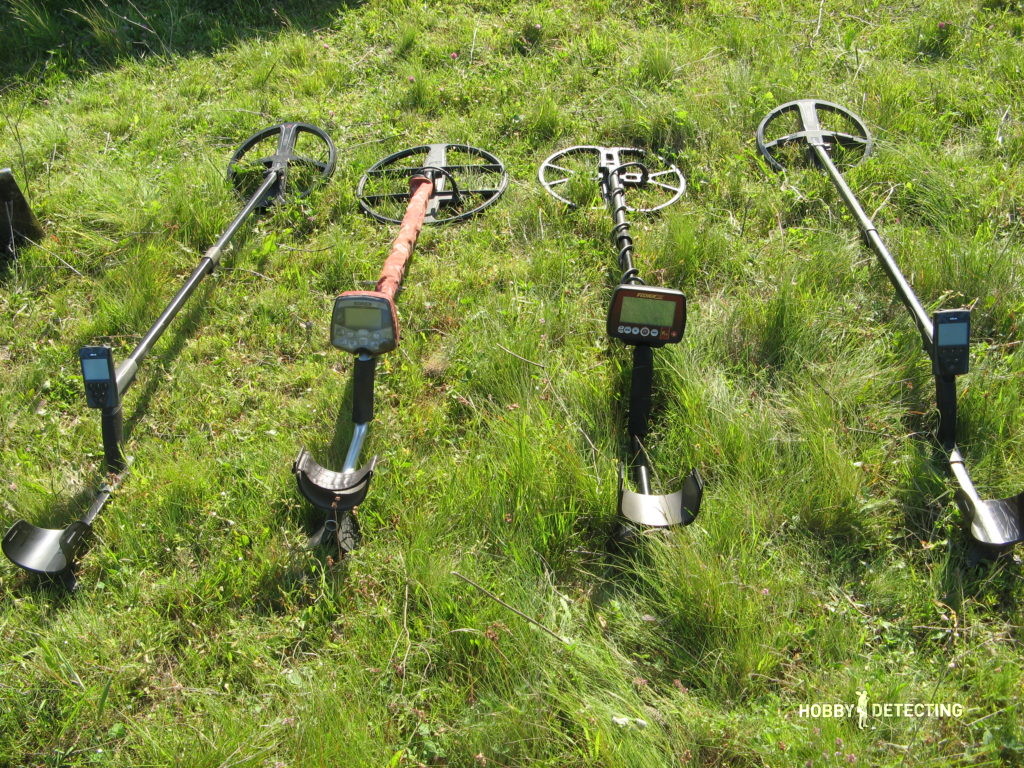 We have different metal detectors and different search techniques, so there were always finds in the company. After all, one place likes one type of search, for example unhurried, and after changing the location, a completely different approach was already needed.

On a small hillside, I had the first interesting find – three modern coins from almost one hole. 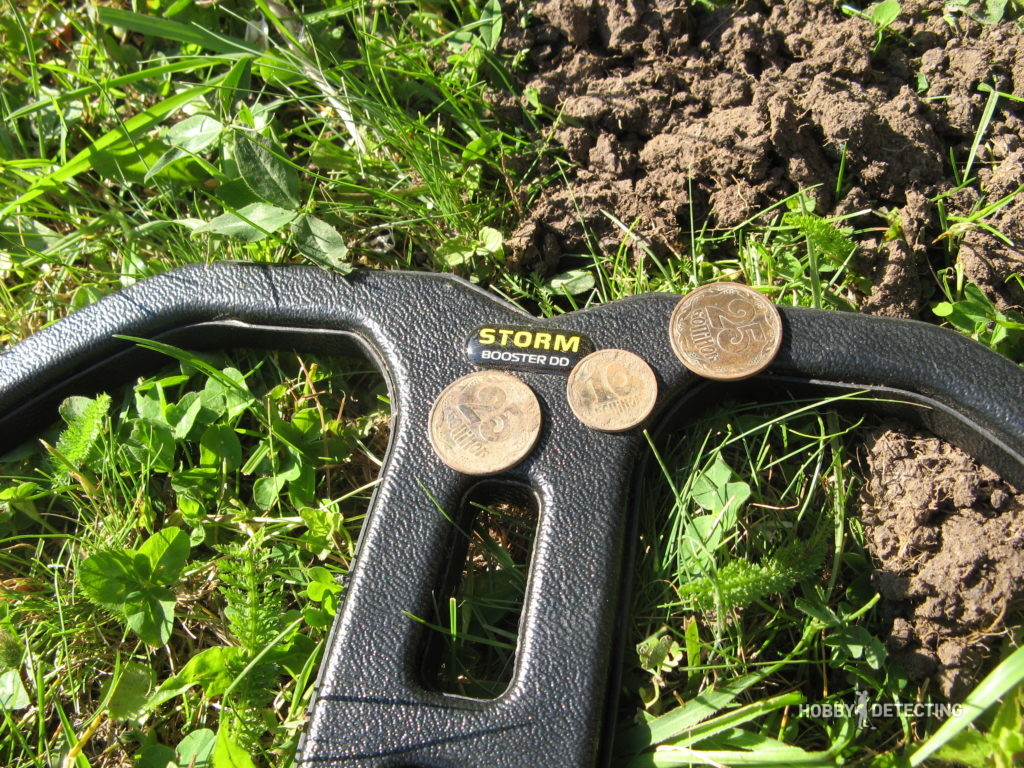 The fellow detectorists went ahead, and I walked slowly down the slopes.

And again, the modern loss of herdsmen was found by my detector. 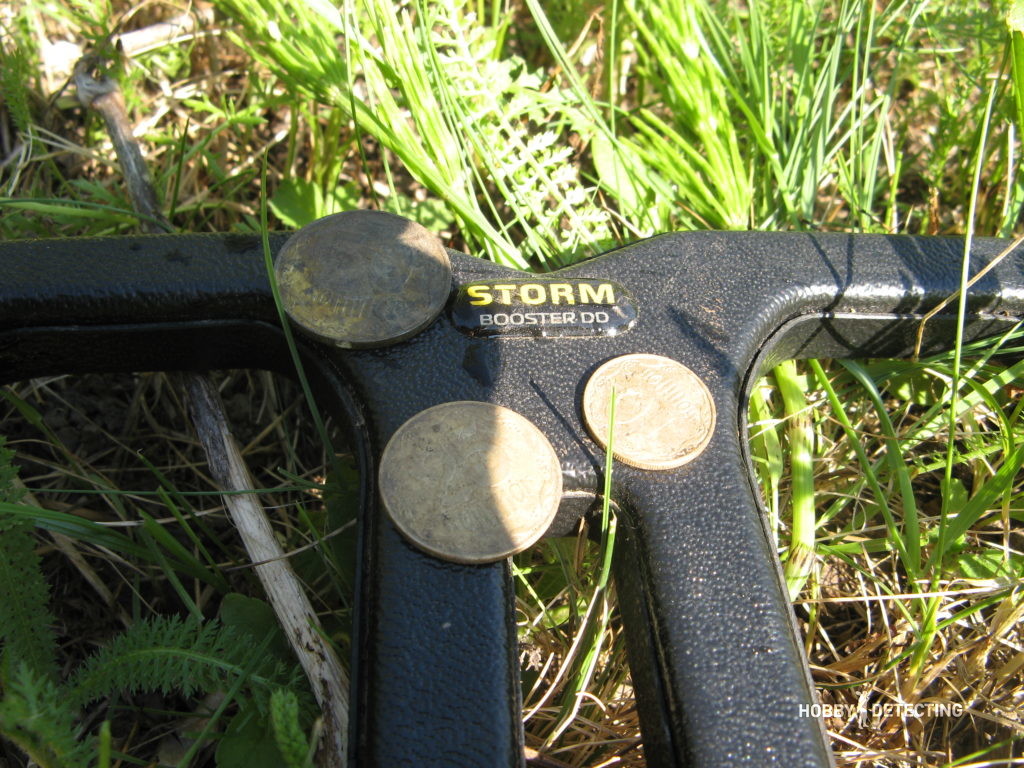 My companions were milled around a sown field. I approached them. They decided to run a little on the crops, since in there were visible fragments of ceramics.

Another hour of a detecting on the field and the result on four detectors was just a fibula found with the Sorex PRO. And it was this detector that went flat on batteries, so we decided to stop by the store before going to the planned forest.

But, not only the Sorex today was moping because of the power sources – my digital camera, apparently included in my pocket, went flat on the batteries. I took out the batteries from the camera, and put it in the detector. On the indicator, only one segment was lit up.

At the edge of the road we left the car, and then we rolled into the thick forest.

Some very bad (I do not want to swear) guys with shovels had dug holes knee deep in the middle of the road, and we unwittingly walked and filled in these excavations.

Turning off the road into the forest and passing another 20 meters, we hit the right spot. Looking closer, I saw a big hollow spot, apparently there once stood buildings here. Having dug in one of them, fragments of ceramic appeared in the dump. 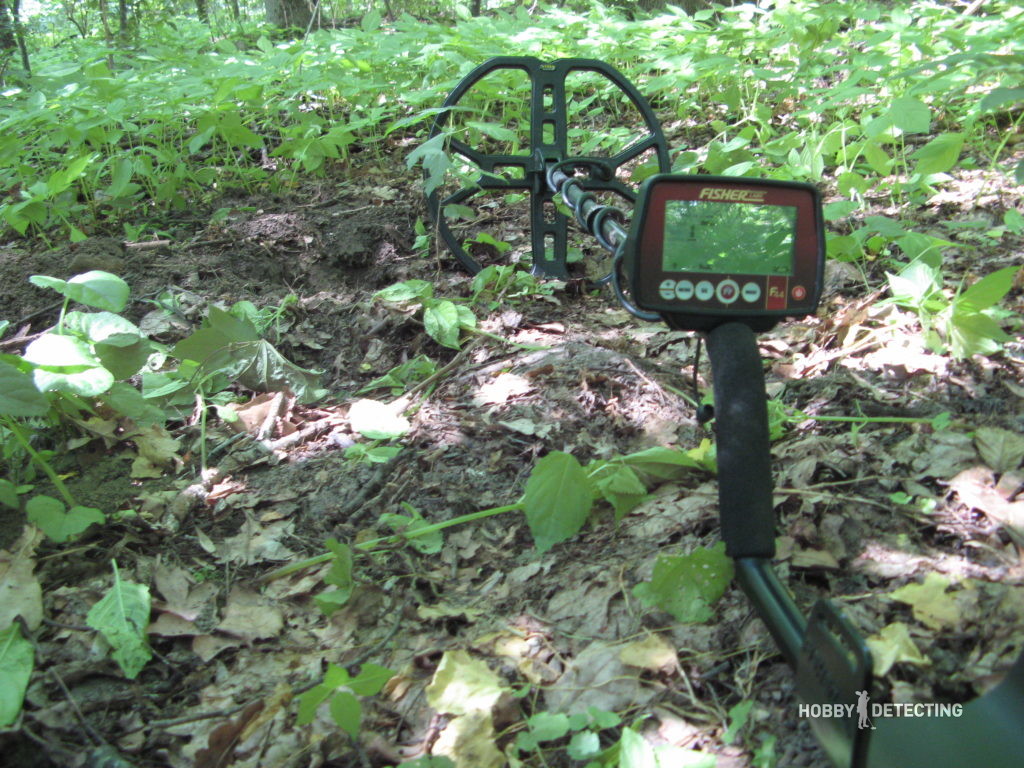 My first find was a shoe forging. Exactly like other signals from that place, it was about 20 cm deep, picking it out from the roots of several growing trees. 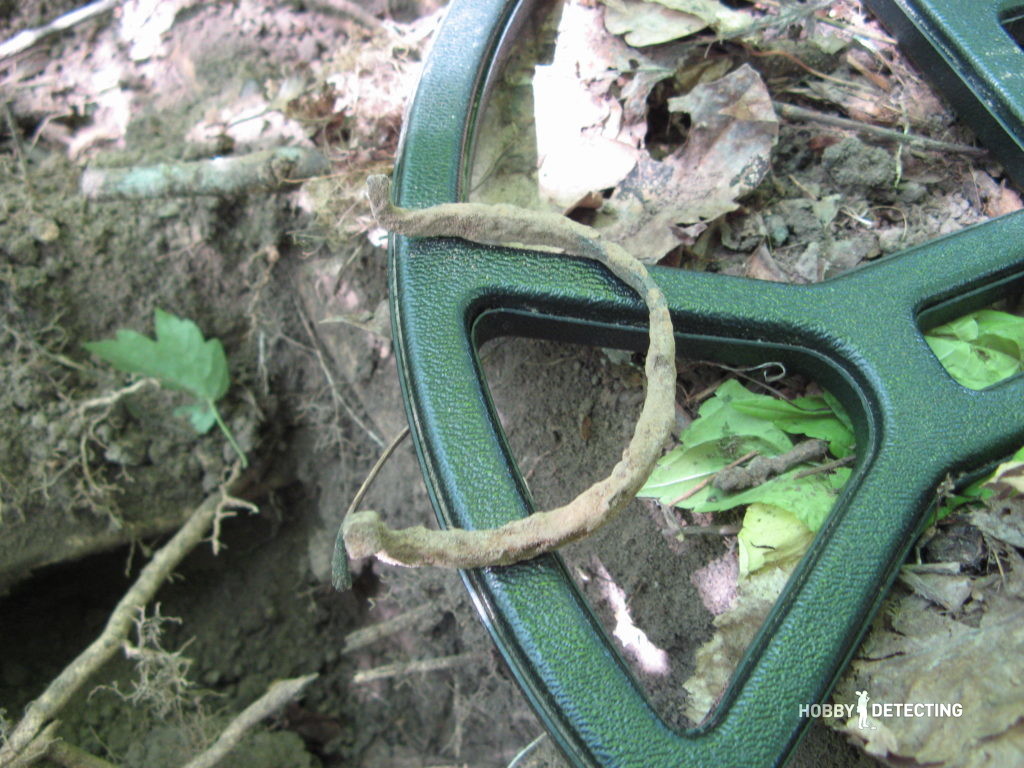 Aha! If the targets were deep, then it was necessary to pull the maximum of the detection range from the detector. I had two black squares on the battery indicator – this was enough for the Fisher.

Because my camera had run out of batteries, I could not take pictures. And who knew that it would be so much fun? And the fun began with the fact that one of my friends with the Deus found the first silver coin. After the discovery of this medieval coin, we all became animated. I was not bored anyway – I had enough signals, and they gave me medieval iron. But the other two fellow detectorists (Sorex and Deus) ran around and found nothing.

The second coin already lay in the pocket of the first lucky detectorist, and the two others had nothing. They had already dug holes knee-deep, slipping on a false signal.

I puffed, digging up a small area with interesting iron targets, the fellow detectorist with Deus picked up the third coin and a medieval seal, and two other fellow detectorists, having trampled down almost all the vegetation, ran away to try their luck further into the forest.

But without the coin I did not leave – deeply, on a weak signal I found a coin from 1626, a Prussian coin from George Wilhelm. 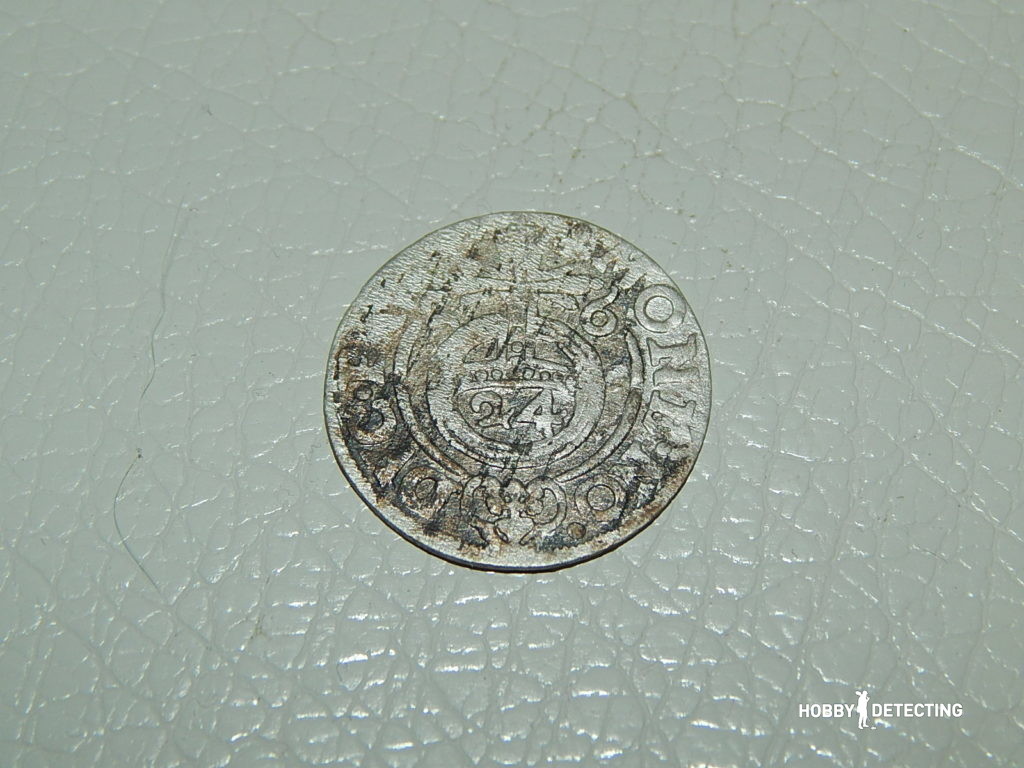 Silver is always nice to find.

Since another place was planned, we switched to it. There, nothing interesting was found, we went to the slopes of the gully, at the top of which everything was already dug up. Here the fellow detectorist with Deus and without finds, found a royal button with an eagle, and a fellow detectorist with the same detector, but more fortunate on that day, found a find that we all came to see. 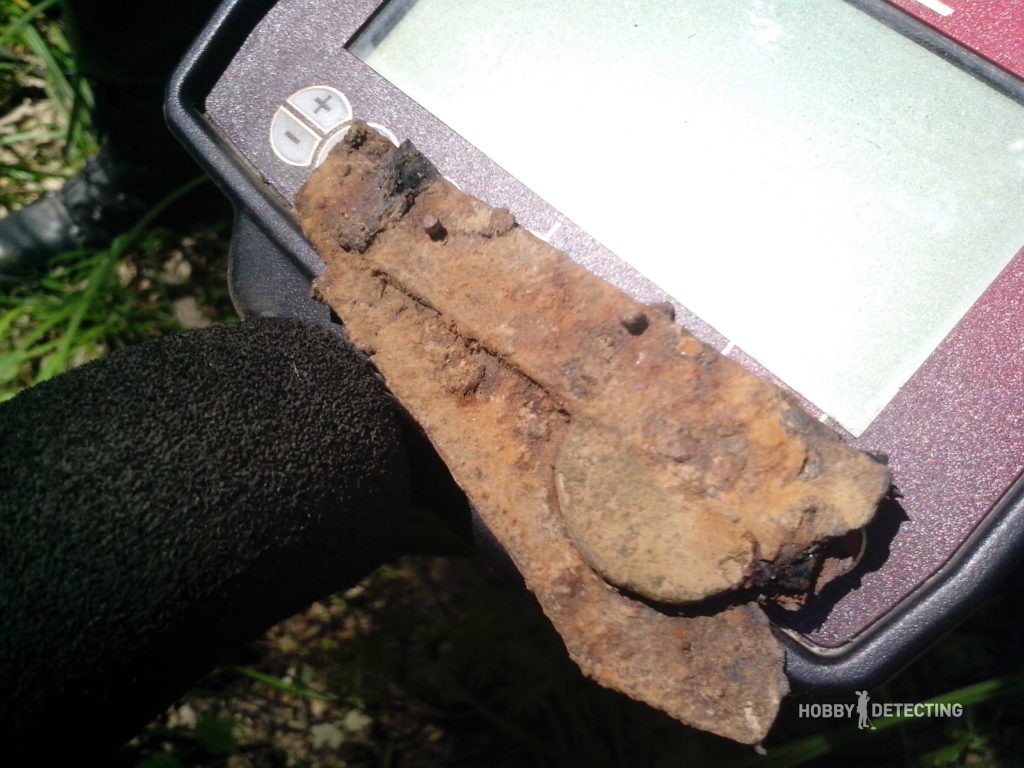 He found a Cossack folding knife, which was stuck together with a coin! I ripped open the knife and took out the coin, rusted of course. I have not fond enough coins from the 18th century to recognize what coin this could be.

Returning to the car, I felt very tired.

My fellow detectorists took out their finds and allowed me to photograph them. I did it with pleasure, after taking the batteries from the metal detector into the camera.

The result of the AKA Sorex and the second Deus: 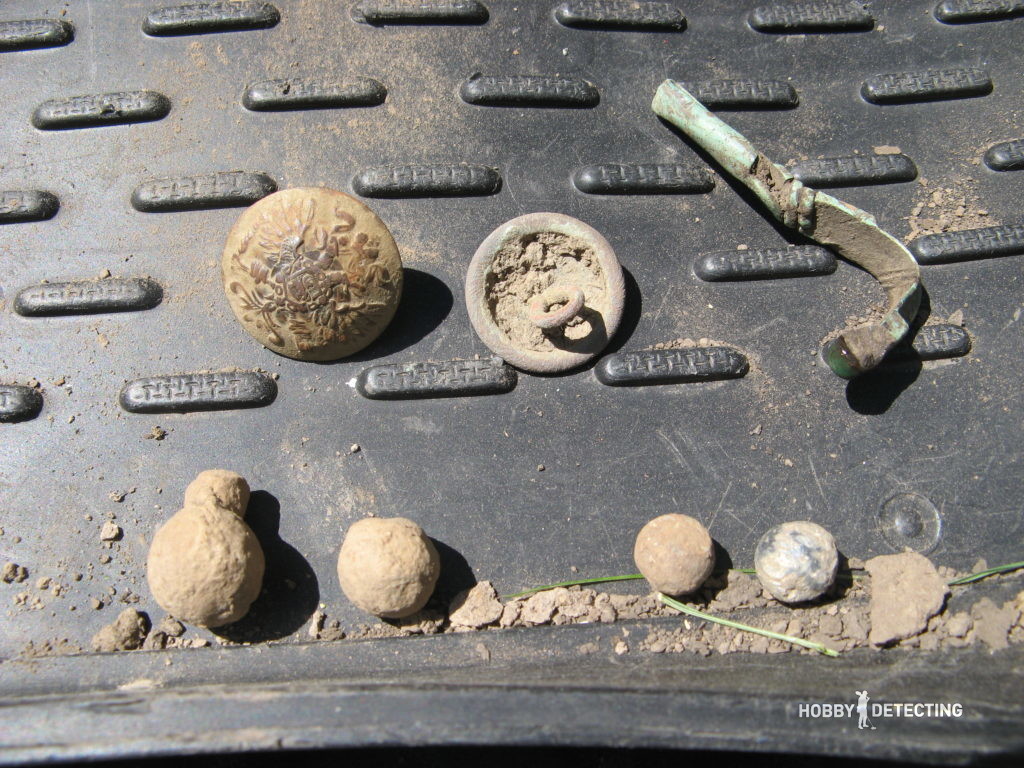 Except the buttons with an eagle, the Sorex found all this.

The result of the first Deus: 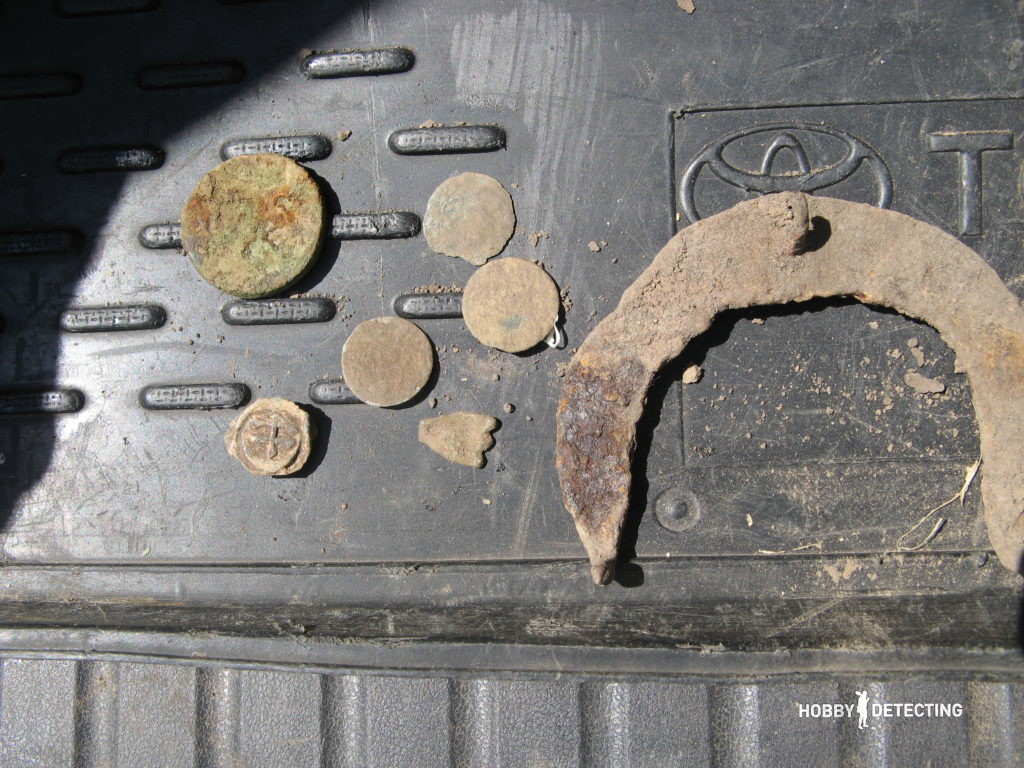 Three coins, a seal, a copper coin, a forging and a bronze lining.

My result with the Fisher F44: 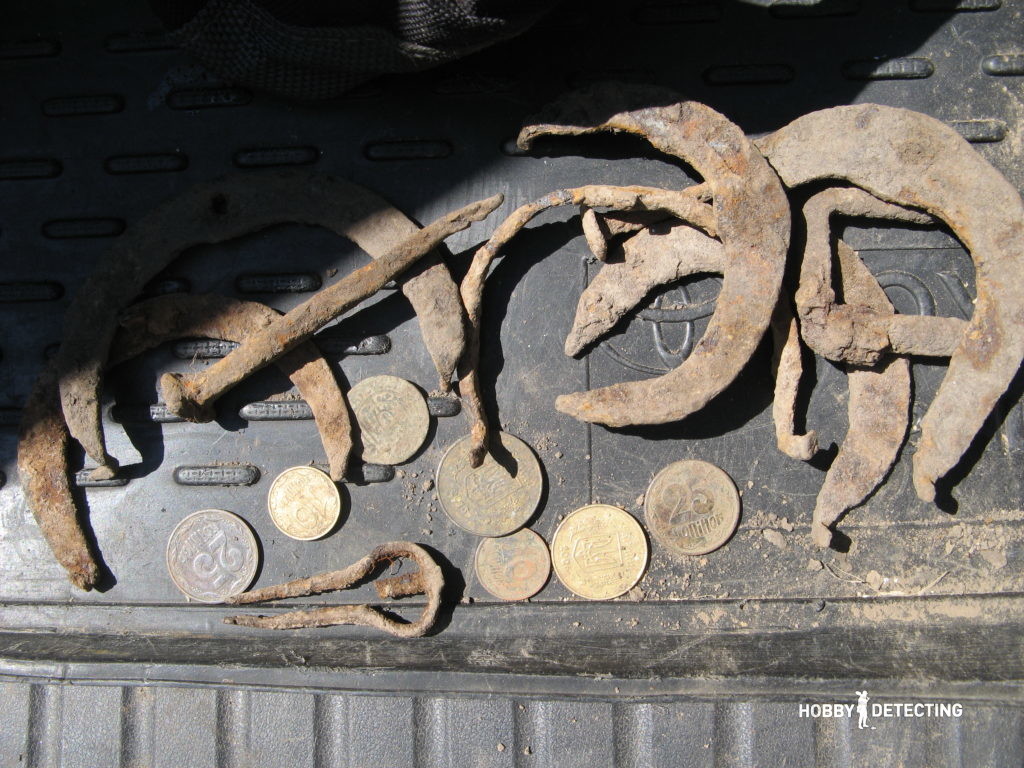 7 horseshoes, 2 nails, a buckle, a vargan, 6 modern coins and one medieval.

I like my finds – I would still dig with the Fisher in this forest.

The Fisher F44 with a large coil – a deep, understandable and simple metal detector. I did not get lost in complex settings and therefore I had the most interesting result. The other three fellow detectorists had complex detectors. If you do not properly set up such a device, you are deprived of either small, or large, or deep finds. So why is it important to have such a metal detector?

Despite the fact that I had a coil of a larger diameter than the Deus, I dug more holes. Why? All because I did not squat for 5 minutes over the excavation, and, thanks to Deteknix XPointer, I spent much less time searching for the target. I cannot imagine my detecting without the pinpoiner.