Recently, an interesting event occurred – specialists from the Northern Fleet rescue team retrieved 2 Sherman Tanks, it seems with the modification of the M4A2 (76) W, from a ship called “Thomas Donaldson”.

“Thomas Donaldson” was sunk on March 20, 1945, by a submarine U-995. And the first unfortunate vessel with an American crew and more than 6 thousand tons of different equipment and cargo on board that was torpedoed and damaged another German submarine – U-968. It is noteworthy that both submarines remained intact after the war and managed to sail for some time in the sea under the flag of the Norwegian Navy.

The rescue team conducted a big operation, raising equipment from the ship. And this is not the first time equipment has been raised from the “Thomas Donaldson” ship, before that, two more tanks and several artillery pieces, including a very rare US 90-mm anti-aircraft gun was retrieved, that could shoot almost to the height of 18 km! 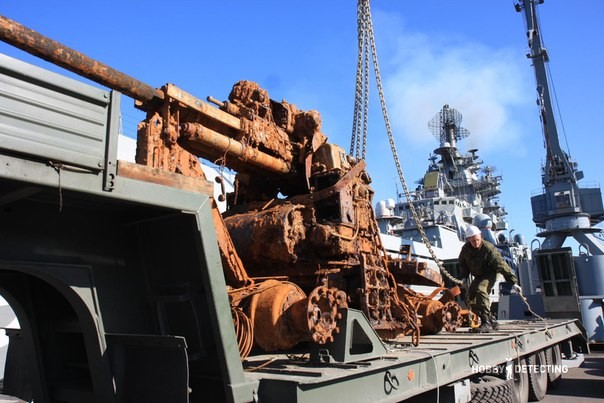 Without complex computing equipment, this would be unrealistic. 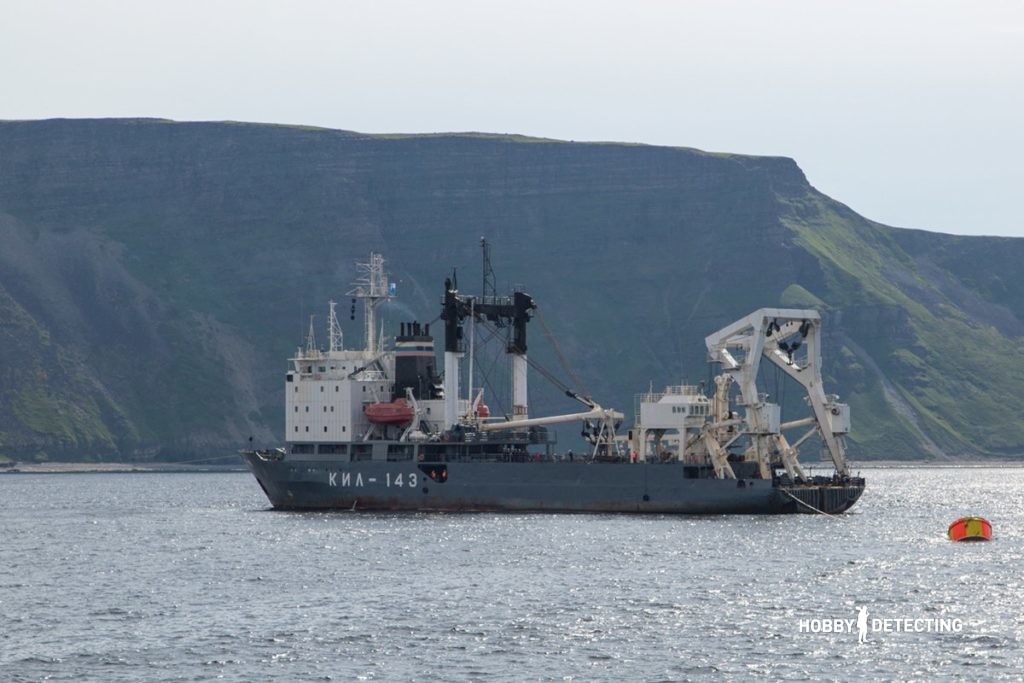 Underwater relic hunting is very interesting because the sea is not explored at all! The lost ship was searched for several years, its location was unknown for a long time and the approximate square of location could be determined only after working with archival sources. It is difficult for divers to work in the Barents Sea because this sea is restless, cold and there is only a short period in the summer when it is possible to dive, so it’s a great luck that such a ship could be found so quickly. The time in which you could retrieve equipment is also short, because the “relic hunting” season is short, and you can bring a lot of interesting things from the ship. 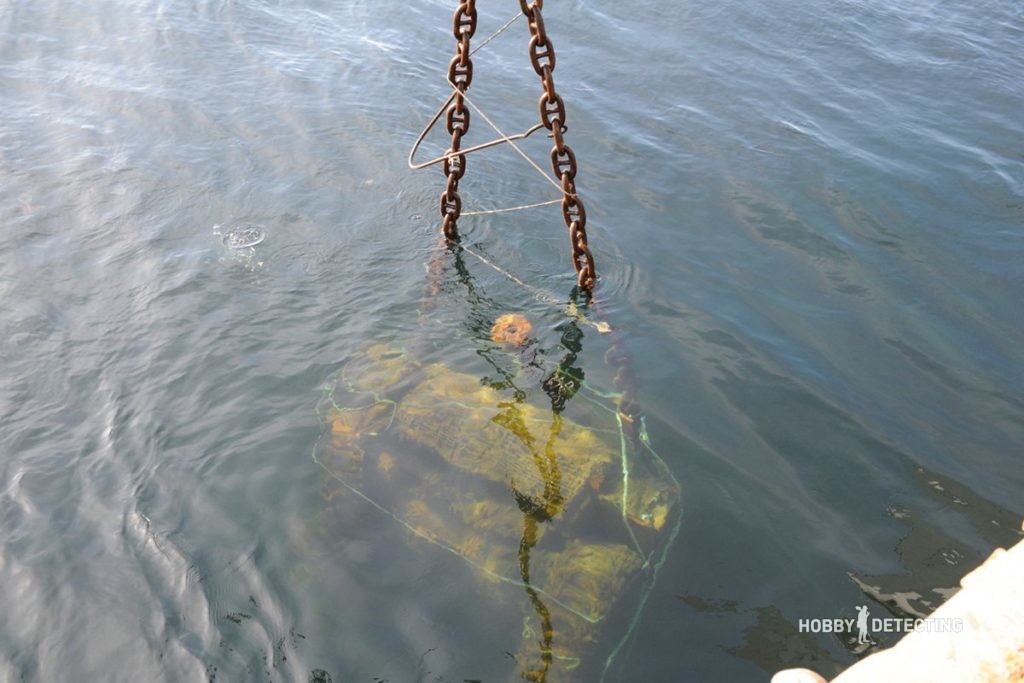 And this year they found 2 Sherman tanks. 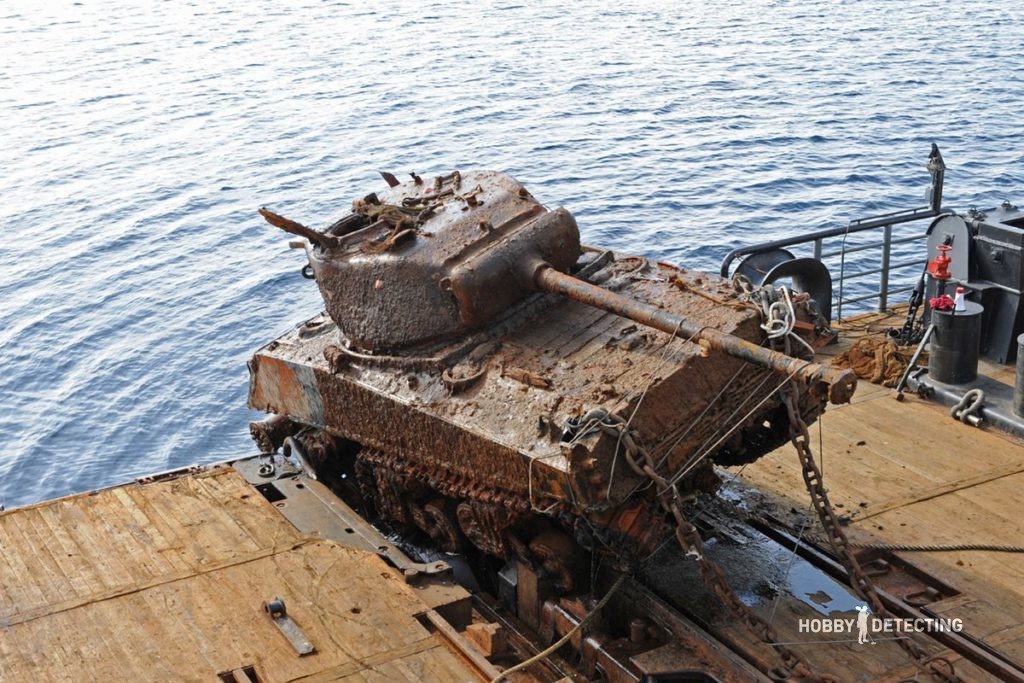 The Shermans with the modification M4A2 (76) W were supplied by lend-lease to the Soviet Union at the final stage of the war. 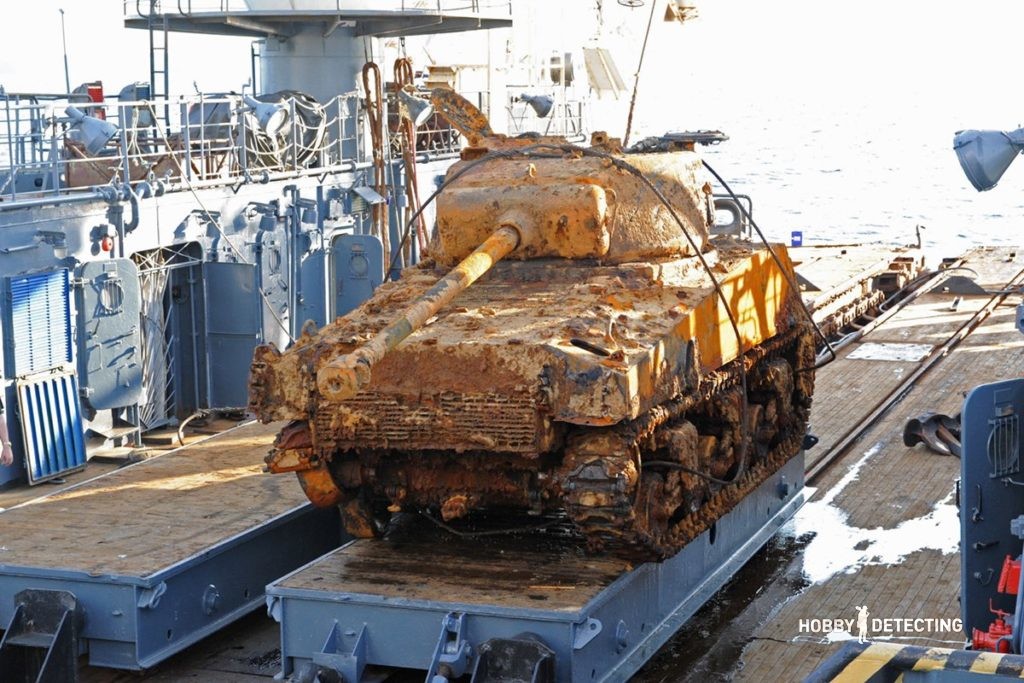 It was this kind of modification of the tanks of the Thomas Donaldson that in the spring of 1945 was victorious. 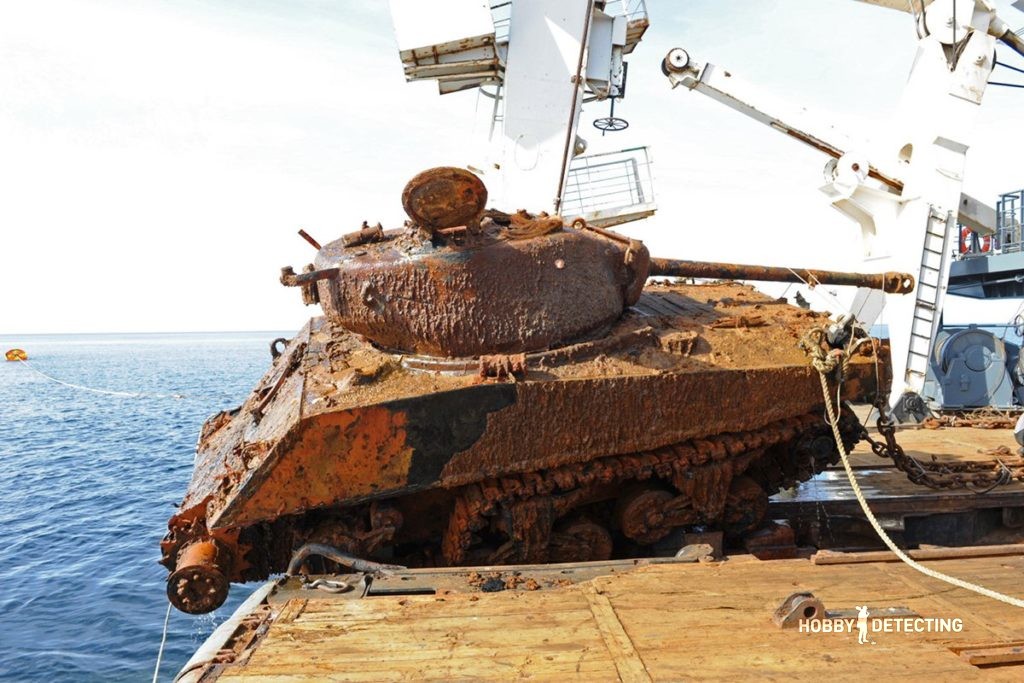 The weight of each tank was 33 tons, it was armed with a 76.2-mm M1 gun, and had ammunition for 71 rounds. For example, an M62 projectile could travel at a distance of 100 m at an angle of 90 degrees, and it could penetrate armor thickness of 125 mm. A serious machine, but it was too high to effectively fight enemy tanks. Again – its own armor was almost cardboard, the armor on the body was only 38 mm! For comparison, the side of the hull of the Soviet tank T-34-85 had an armor of 45 mm, which was at an angle – it gave more chance to the ricochet of the projectile. And here the armor was flat, and therefore this tank could not be called anything other than a “steel coffin”, no matter what they showed you in the movie Fury. The opponents, however, had a very different thickness of armor, for example, the PzKpfw IV modification Ausf. H had a thickness of armor of 20-30 mm, and PzKpfw V (Panther) – 50 mm. 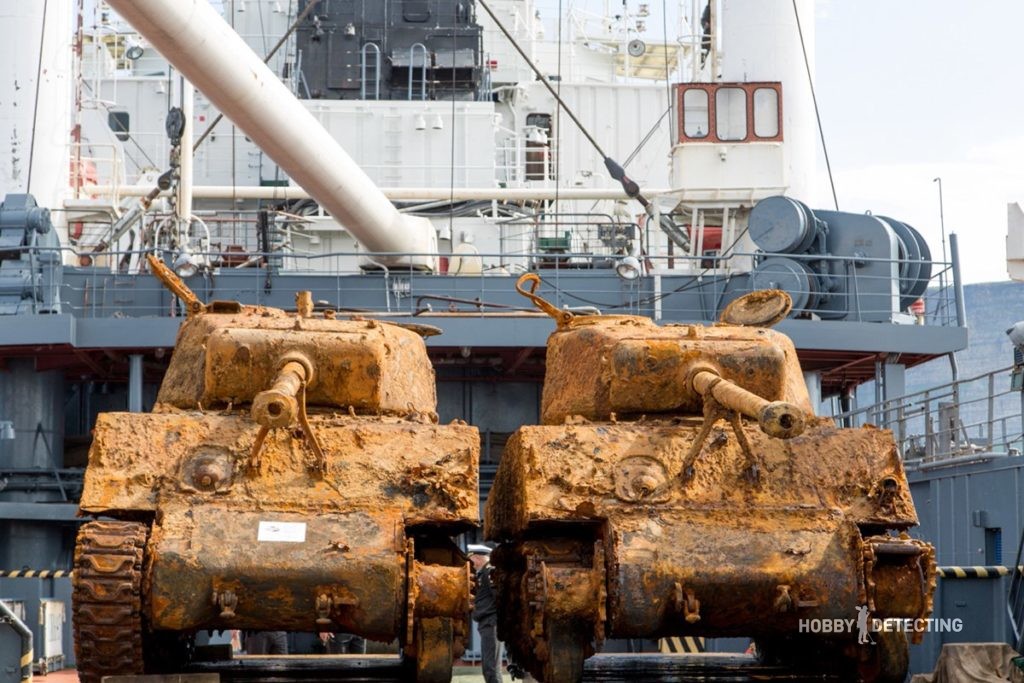 The engine was a General Motors 6046 with 410 horses, with an acceleration of the steel machine to a speed of 45 km / h, and how much does the tank need for that time? 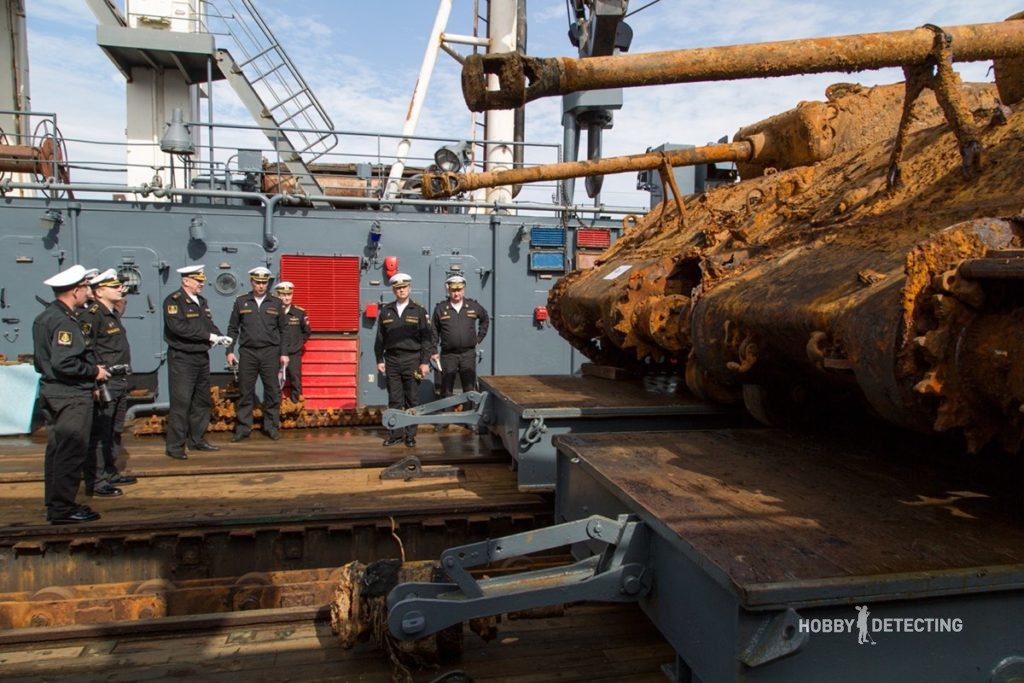 And yet, despite all the more or less obvious shortcomings, the Lend-Lease Shermans had time to fight with the enemy and the Eastern Front, they participated in the liberation of Belarus, Poland, and the capturing of Berlin. 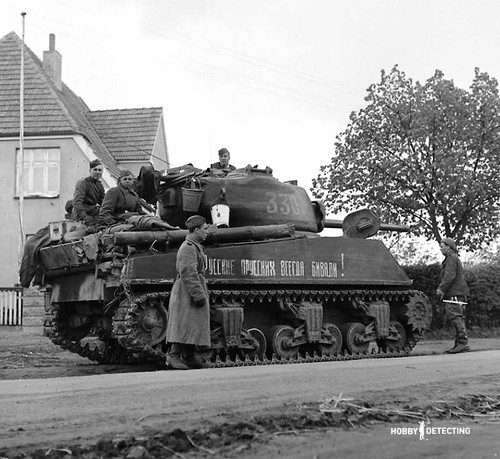 Also with such interesting records on board. Whatever one may say, but for a crew of 5 people, the Sherman was much more spacious than the T-34, and it did not fight every day. And what does a soldier need? Close to the kitchen and sleep.

Are you digging under the water? If not, then in vain, all the gold will be left for other detectorists!