One day me and two of my friends agreed on going detecting. But at the very last moment, when the metal detectors were already loaded into the car, one of the friends caught up with urgent business – so we had to go only the two of us.
We didn’t know where exactly we would go detecting, since the harvesting of wheat had just begun, so it was decided to search for an empty field.
We passed a dozen fields, but they all were still “closed”. It isn’t quite the season for fields yet.

On the way back, we decide to walk along the forest line. There are enough forests in the area – and we choose the first one. 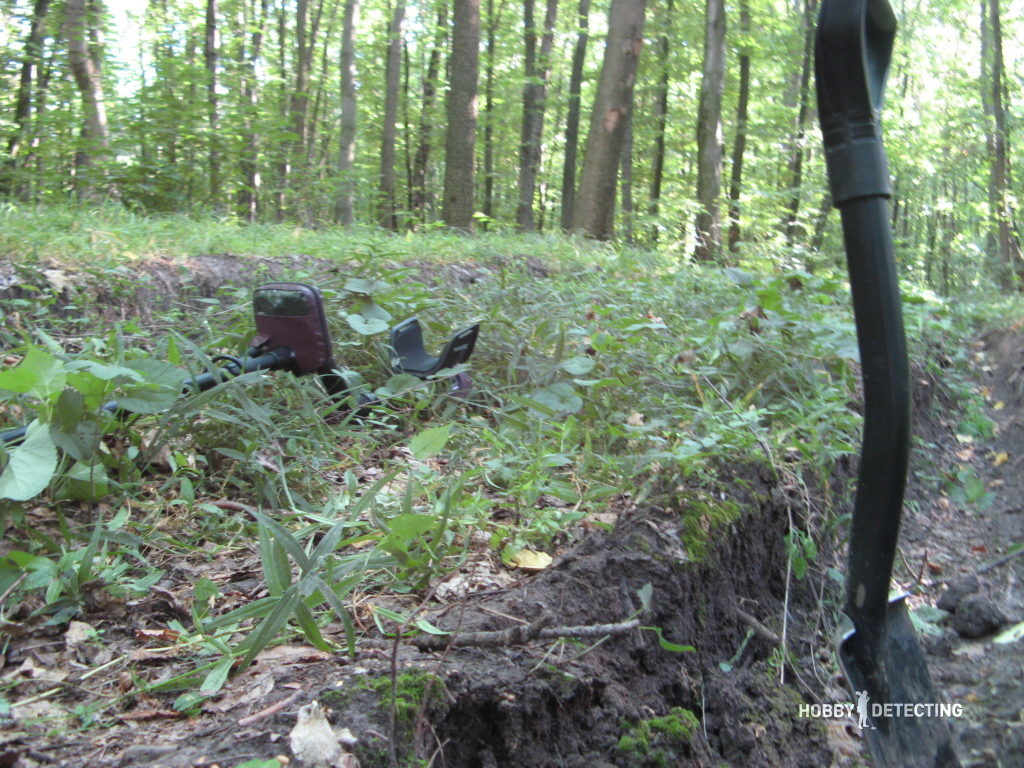 We went for a long time along a path, until we stopped on a sloping lawn near a stream, which flows in a wooded ravine.

I had a choice of 2 metal detectors: the Fisher F44 with the Nel Storm coil, or the Makro Racer 2 in the standard configuration. Without thinking twice, I decide that in the forest it will be more interesting with the Makro, since its elliptical 11-inch coil would be more confident among the branches. In the same way, my friend went into the forest with a 12.5×8.5 inch Nel Hunter on the AKA Sorex PRO, which will be even more practical than the racer. 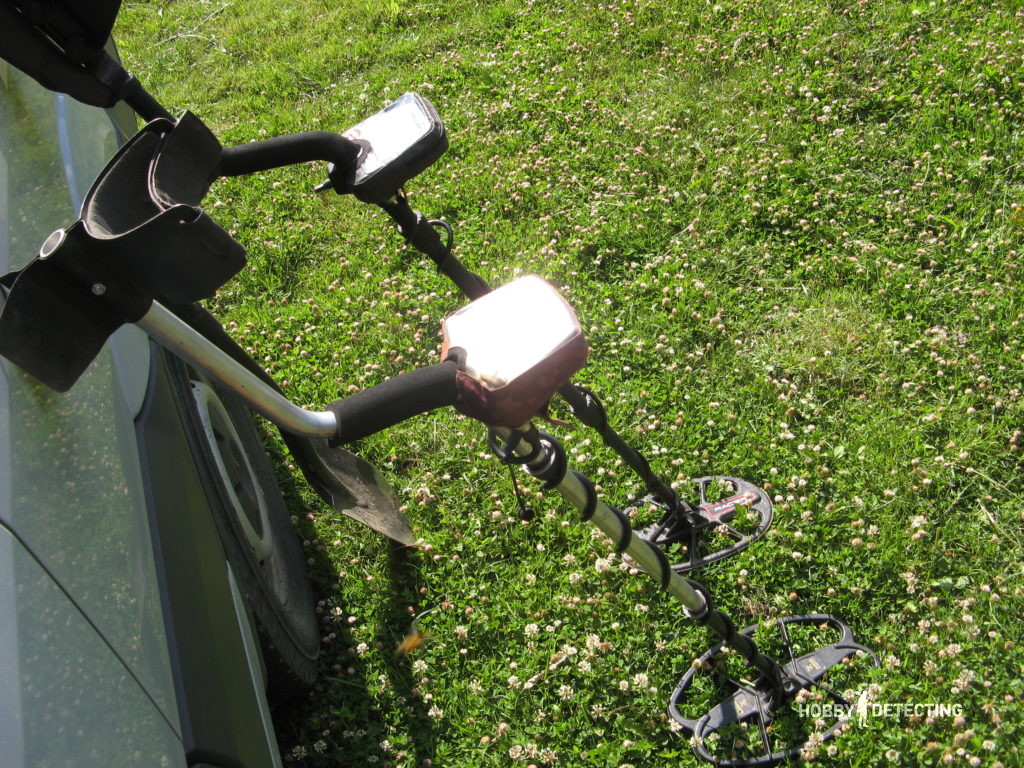 The last couple of weeks there had been hot weather, and because of this in the shady forest there was a cloud of mosquitoes. When you would stop to dig a signal, you would be immediately attacked by an armada of these biting creatures.
The forest was relatively clean – without shrubs and excess grass. But, having looked better, I found a lot of holes, made in this, and in the past years. I wonder what they were looking so hard for? Searching in between branches and bushes, I found several cartridges. Were they digging war relics, or what?
The terrain was hilly and we climbed up and down to the bottom of the next ravine. 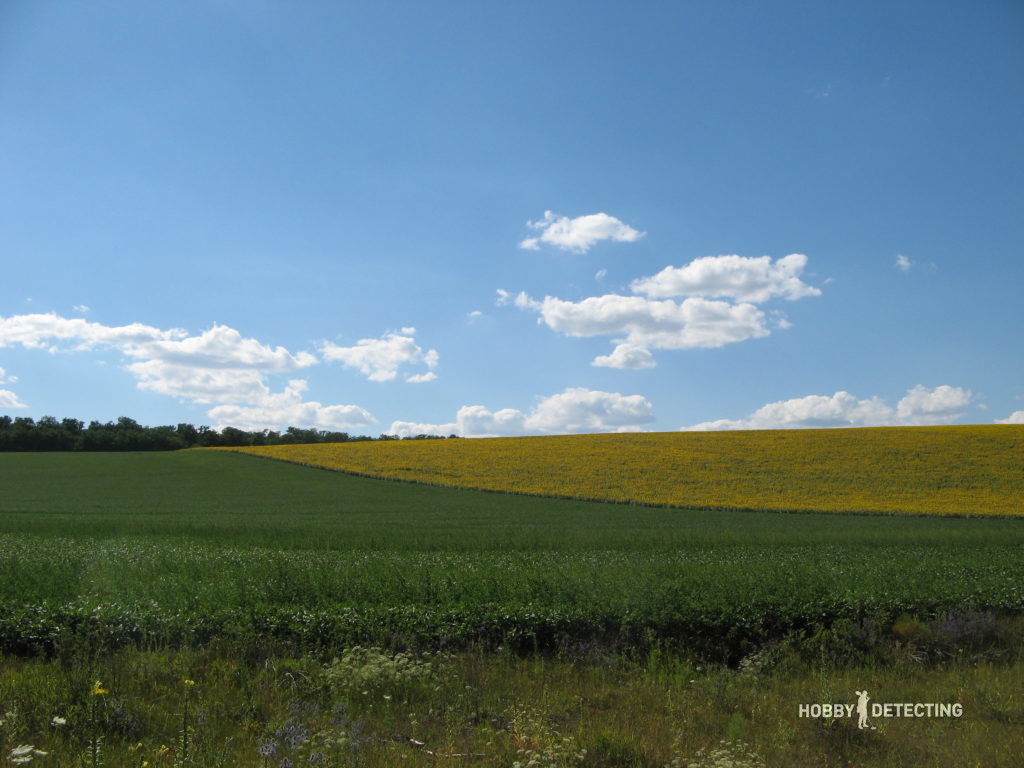 And now at the top of the hill, where the deep track was clearly visible, my friend found a blunt-nosed bullet, and I found its shell in a five meter distance. We decide to go back. My friend ran forward, and I walked along the road.
And then i suddenly got a signal. I did not dig too deep. I did not see the find at once, so I decided to use my Deteknix pinpointer. The mosquitoes started attacking at once – this started to irritate. The pointer showed where the target was, and I could see something yellow and shiny. “Custom jewelry, or what?” i thought. But when i picked it up, I began to call my friend, who could not believe that there was something interesting left in this forest. 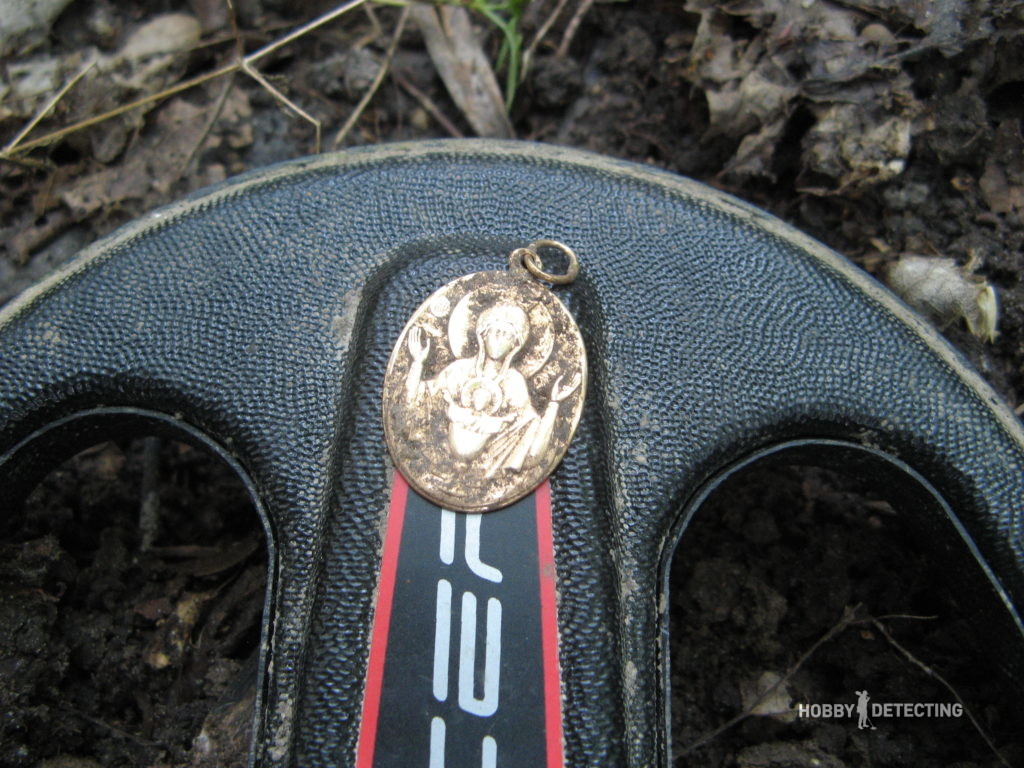 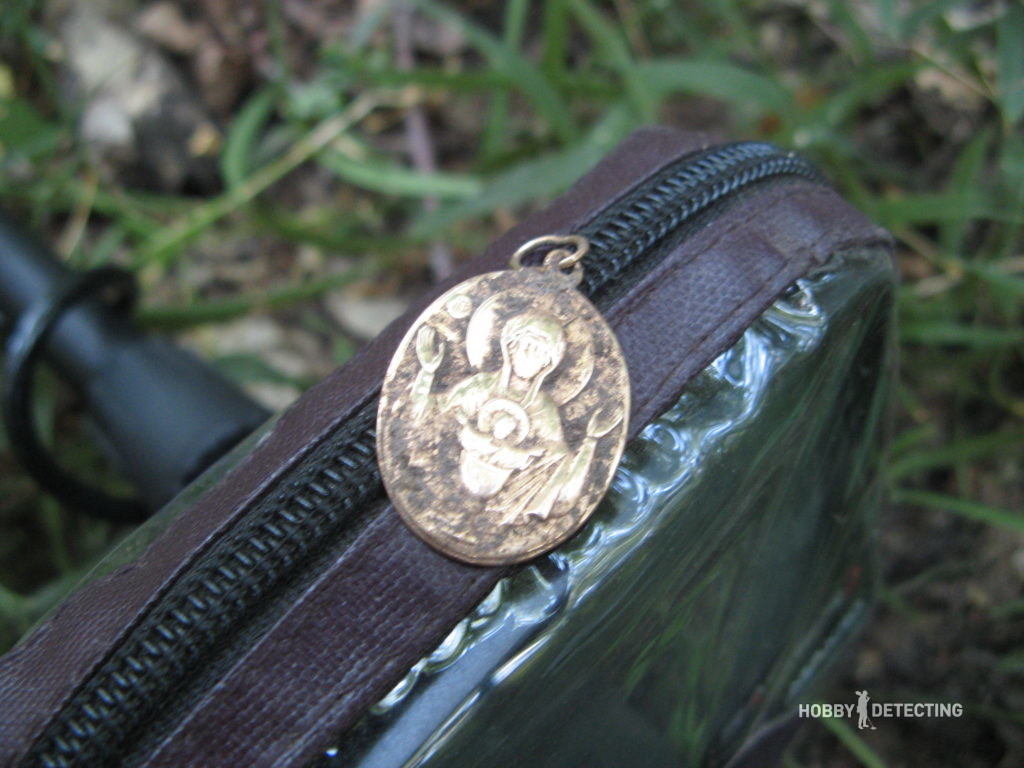 My friend congratulated me with the gold and ran off to find his own, without disturbing me who was walking around, trying to find the chain. After making a couple of circles and finding nothing more, I ran to the side of the car, rejoicing in the find and swearing at the mosquitoes and lonely nettles (i was walking in shorts).
On the way back i found nothing worthwhile any more.

At home, I washed the find and began to examine the markings on the ring. 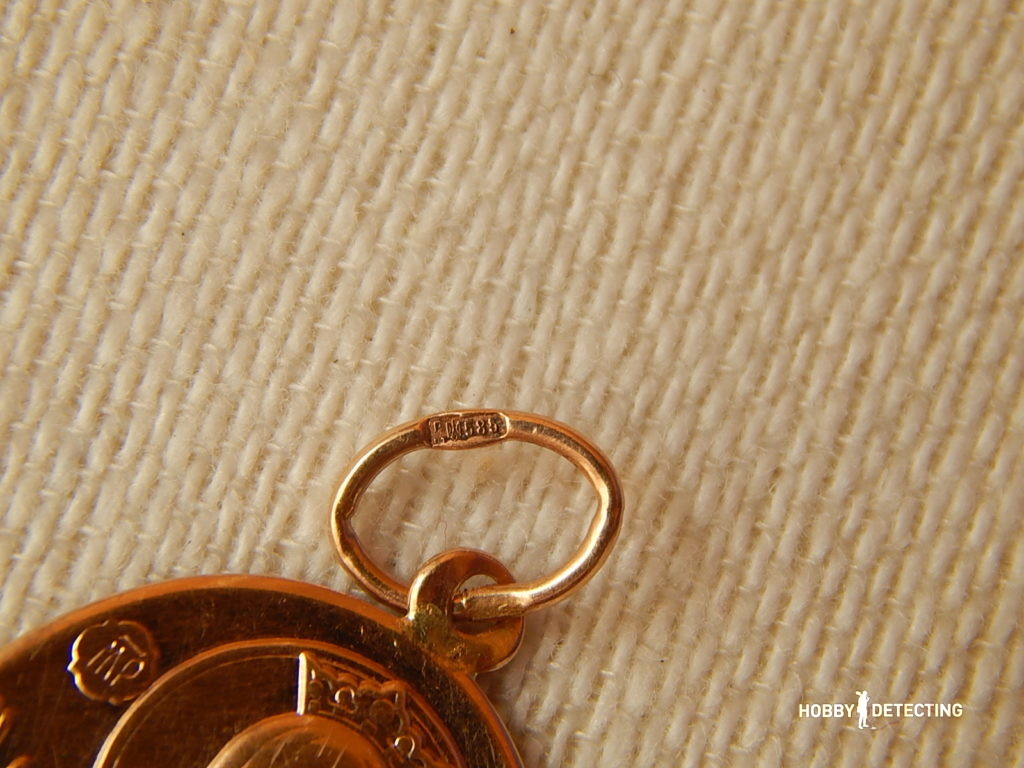 The marking said 585. Ah, a modern product. But, this means that it can be found on the Internet, since such items must be on sale. And so it was – after spending only a couple of minutes on google, I found a description of my find:
• Red gold icon
• Marking 585
• Weight 1.2 grams
• Price of approx. $46 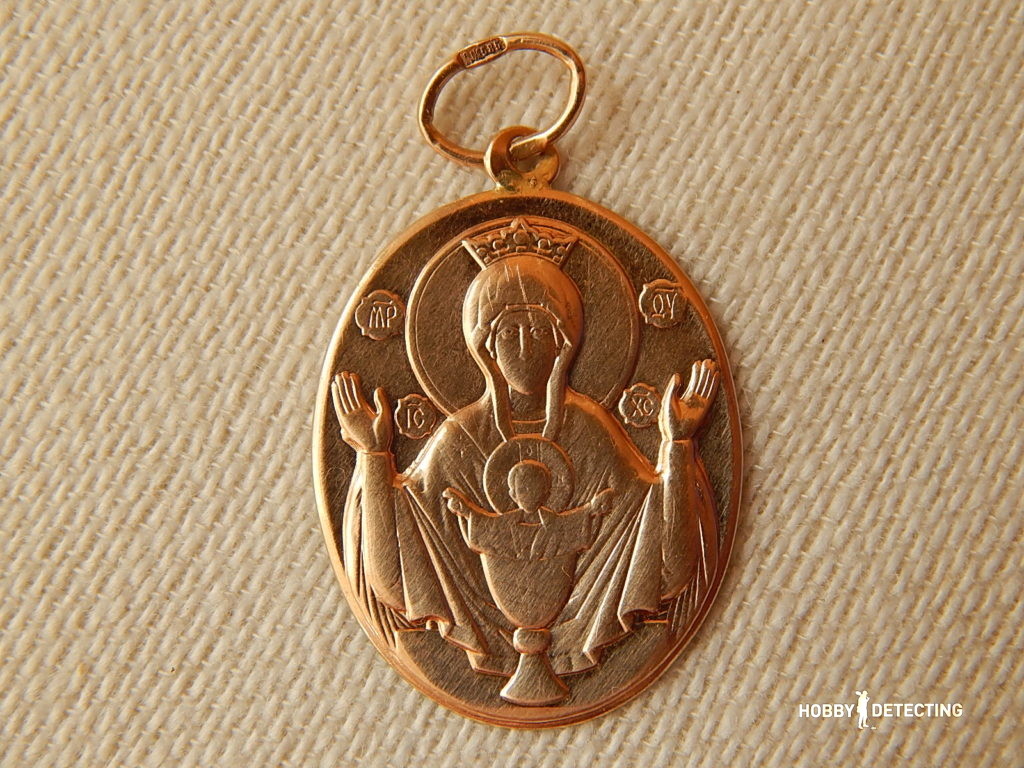 I think that the pawnshop will take my find for about $25-30.

A metal detector for gold prospecting

I return to the title of the article. So, which metal detector finds gold?
This icon made out of gold was found by a professional level detector. The find lay at a depth of about 5 centimeters. And do you think my friend with the Sorex would have found it? Yes, he would. And how about an Ace 250, for example? Of course. But what about a man with a Chinese metal detector? Undoubtedly!
It does not matter what kind of detector you have – it will find gold, and you will only have to dig it and enjoy your luck.

Only he who seeks – he finds. There is no other way of it!

Want to read about more golden finds? You should look here!