When digging for relics, the finds are not only coins, but also different relics and personal items, like buttons and crucifixes worn around the neck. It seems that people used to love to fight, have a good party, or simply maybe the rope just broke and the crucifix fell off.

In any case, good finds in form of rare crosses can be found:

Initially, we see crosses with the image of the Savior in the center, as seen in below in example № 1, 2 and 3. The peculiarity of these crosses is that the right of the Savior is an image of Mary, and John the Apostle is depicted on the left. But here, too, every cross has its own peculiarity. At the top of cross №1 these leters can be seen: MPCXC / ΘIIO, and the bottom image is NIKI (Saint Nicetas) who holds a cross in his hand. On the cross №2 there is the letters – MPΘW / ICXCI, and on the bottom: CTΘΛO (Saint Florus). Cross №3 has the top letters: CXC; Bottom Saint Nicholas. Cross №4 has the image of the Savior in the centre. 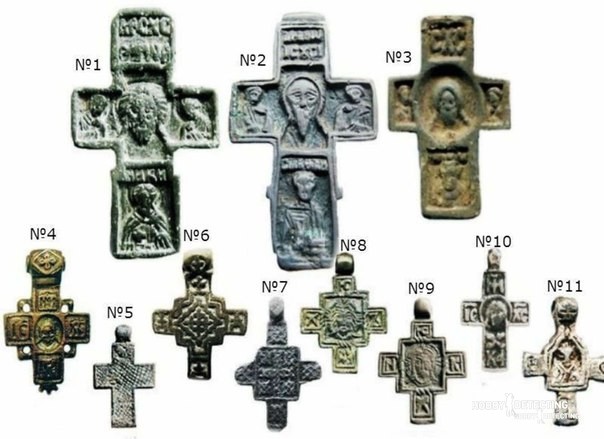 Form №5 -9 we see crosses from the 14-15 century. It must be said that the dawn of the region is associated with the Golden Horde. Due to the relationship and support of the Golden State, this religion principality developed and flourished during the Middle Ages. Therefore, the crosses from 5-7 has their own kind of ornament.
Cross №8 has an image of the Savior in the middle, along the edges of the cross we see the letters: the top – IC, right and left the letter – X, bottom – NI / KA.
Cross at №9 differs from the previous one with these letters on the right and the left – N K, and bottom – H.
The silver cross №10, is probably a later version and has the image of the Savior in a enclosed circle. Silver cross under №11 has an image of Christ with his shoulders.

Beautiful finds, no? And have you ever found any crosses?

We have a very useful section – Identifying finds. By its very name it speaks for itself!