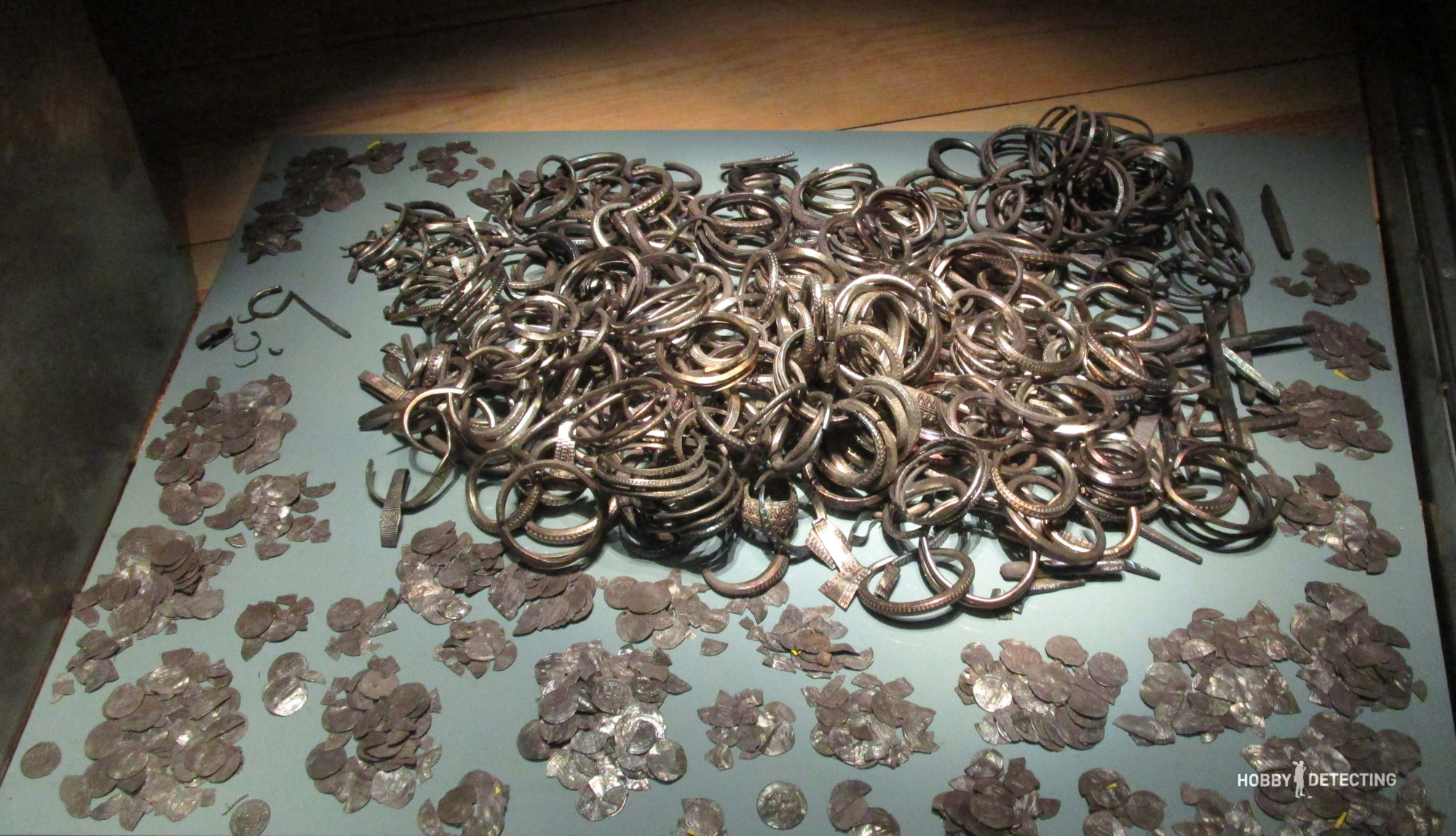 One of the worlds largest silver treasures was found on Friday July 16, 1999 in a field next to a farm Spillingz, north-west of Slite in the northern part of the island Gotland in Sweden.

The total weight of the treasure was 67 kg silver and 20 kg of bronze! The total amount of coins found was 14,295! Archaeologists have concluded that this treasure was hidden under the floor of a Viking barn in the 9th century.

The find was made in the most incredible way! On that day, on Friday, July 16, 1999 on the island of Gotland, there was working a crew from the Swedish channel TV4. They planned to shoot a story about the Viking treasure. The experts and archaeologists were Jonas Ström and Kenneth Johnson. The Farm Spillingz were chosen because previously there had been found around 150 silver coins and bronze items from the Vikings by the owner of the land – Björn Engström. 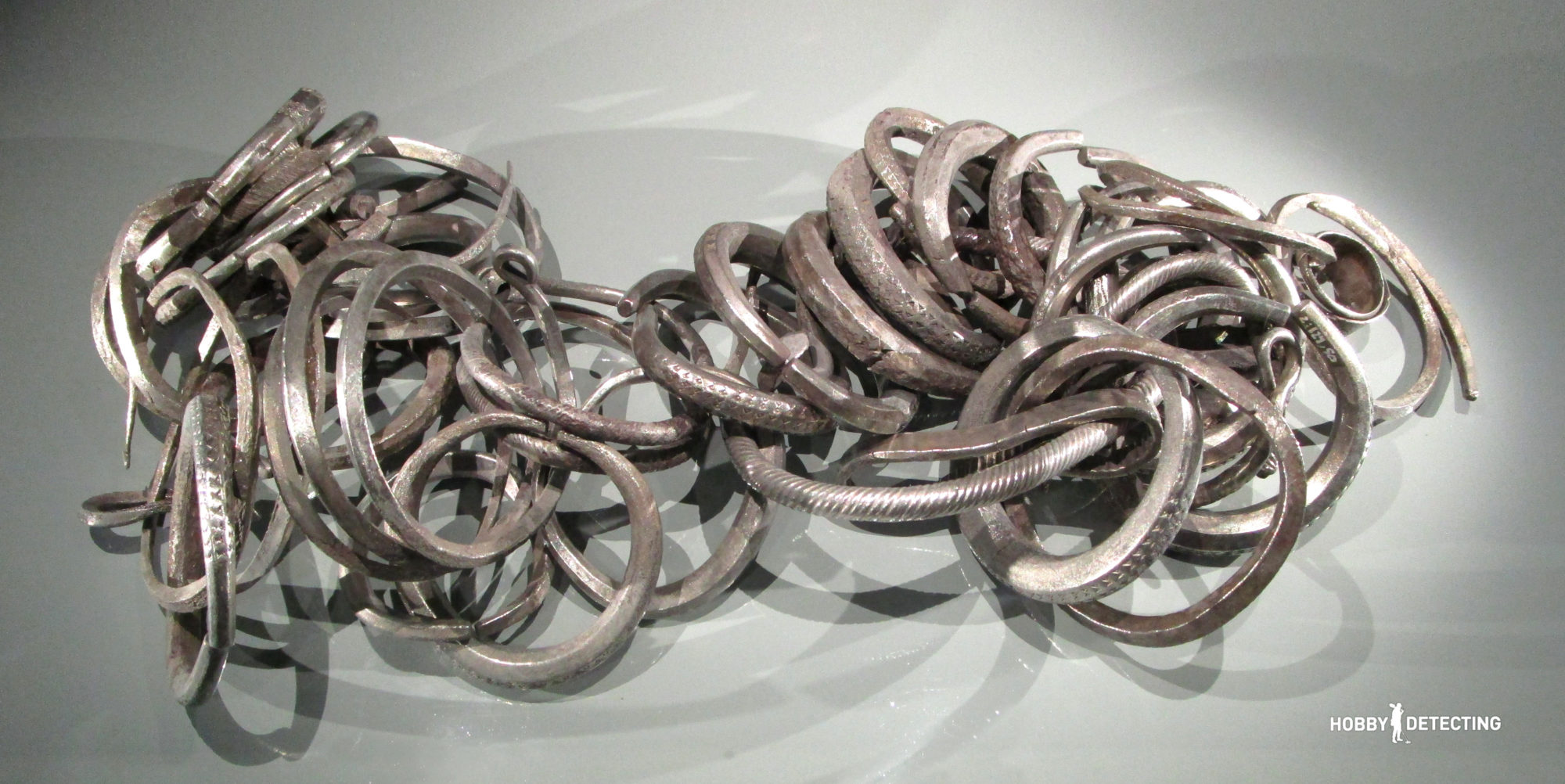 After the material was filmed and the crew went home, Ström and Johnson decided to run across the field with their detectors. Just 20 minutes later, there was a strong signal in the ground. It turned out to be a huge treasure. Just three meters away from the first treasure, there was a second one found. According to the scientists, their metal detector “crashed”. I am not sure about what detector this was, but i think they only said so for the media! Nevertheless, such an amount of silver in the ground should give a really good signal!

The place of the discovery was not classified by the goverment. Gotland Museum immediately announced it to the public, and thousands of people were drawn to the place to personally observe the process of the excavation.

They dug out the treasure as one pile of dirt, to try to preserve it to the maximum. An attempt was made to X-Ray the pile, but due to the huge amount of silver they could not see anything. 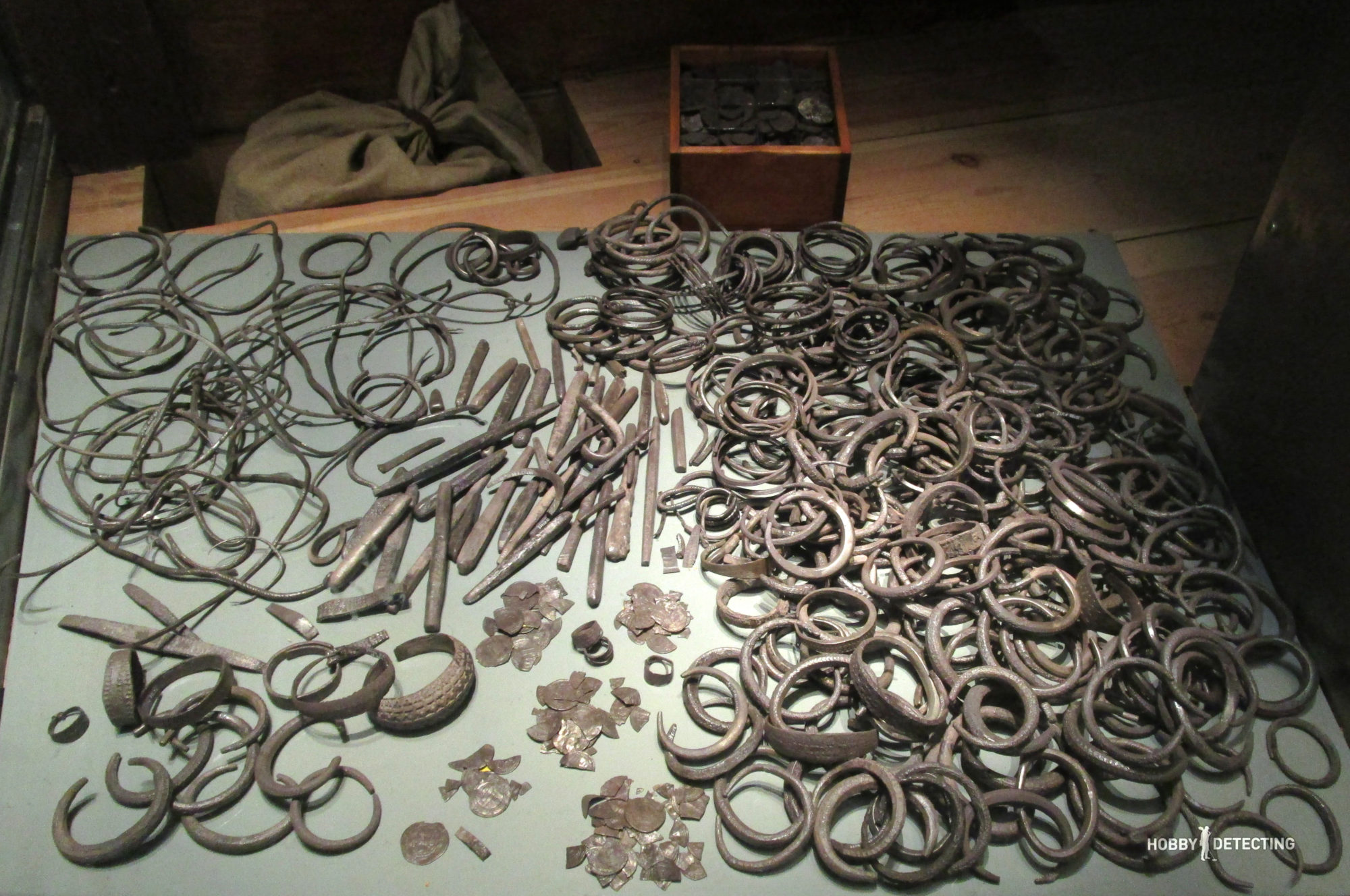 The smaller hoard of silver was slightly damaged by a plow. The owner of the land admitted that he found some wired looking objects while plowing, but he tought it was rubbish.

The bronze treasure contained a set of fragments of decoration mainly from the Baltic region, and even Russia. Many of the items were melted. Photo attached: 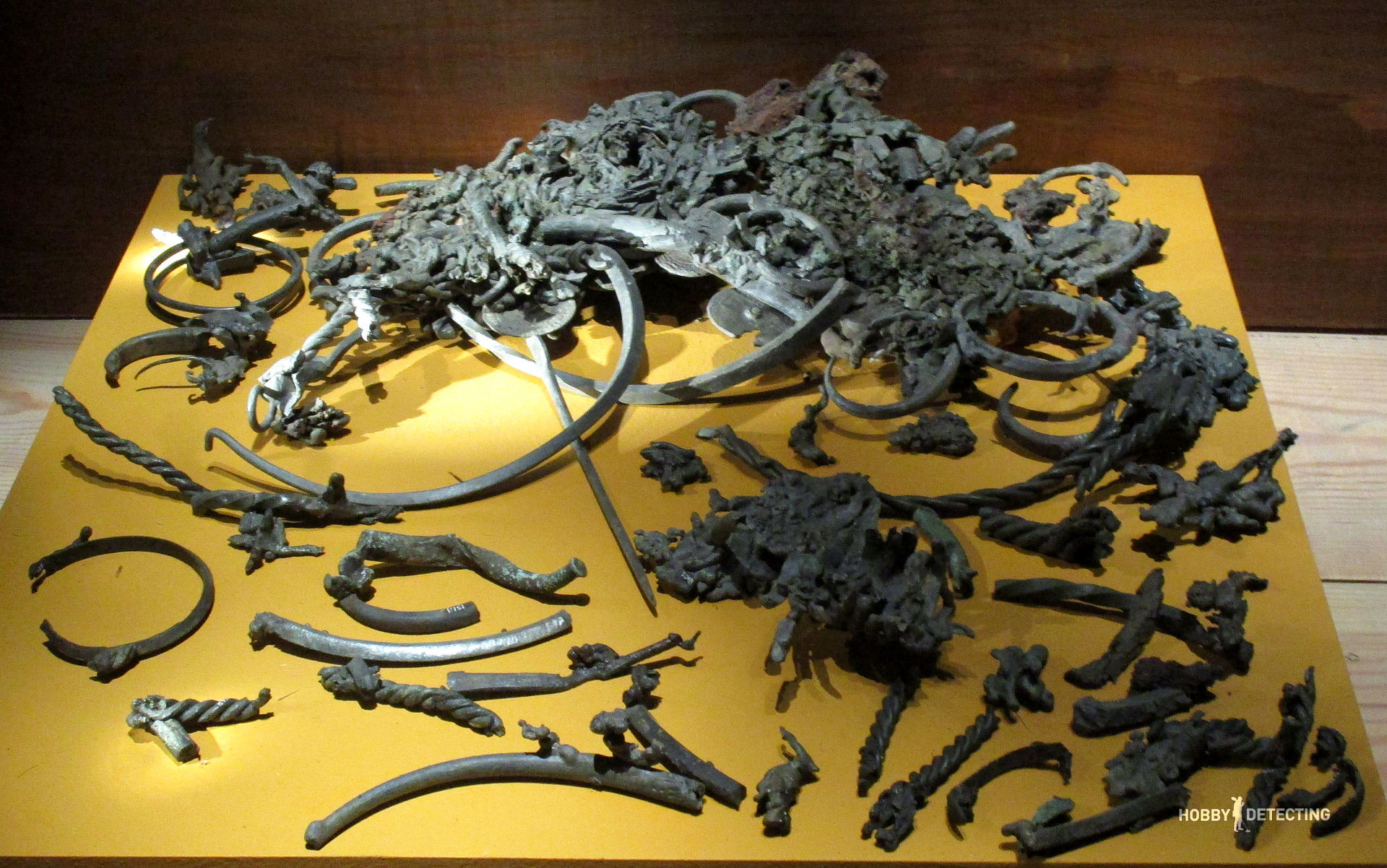 As a result, further work on the site uncovvered pieces of boards and parts of locks, so the treasures were buried in chests. In addition, scientists have determined that this place had been a certain structure. It was found out that this place for more than 1000 years was a village until the late 19th century. This is evidenced by the fragments of bronze and copper products, baked clay and needles from clothes. In the photo below you can see fragments of one of these chests. 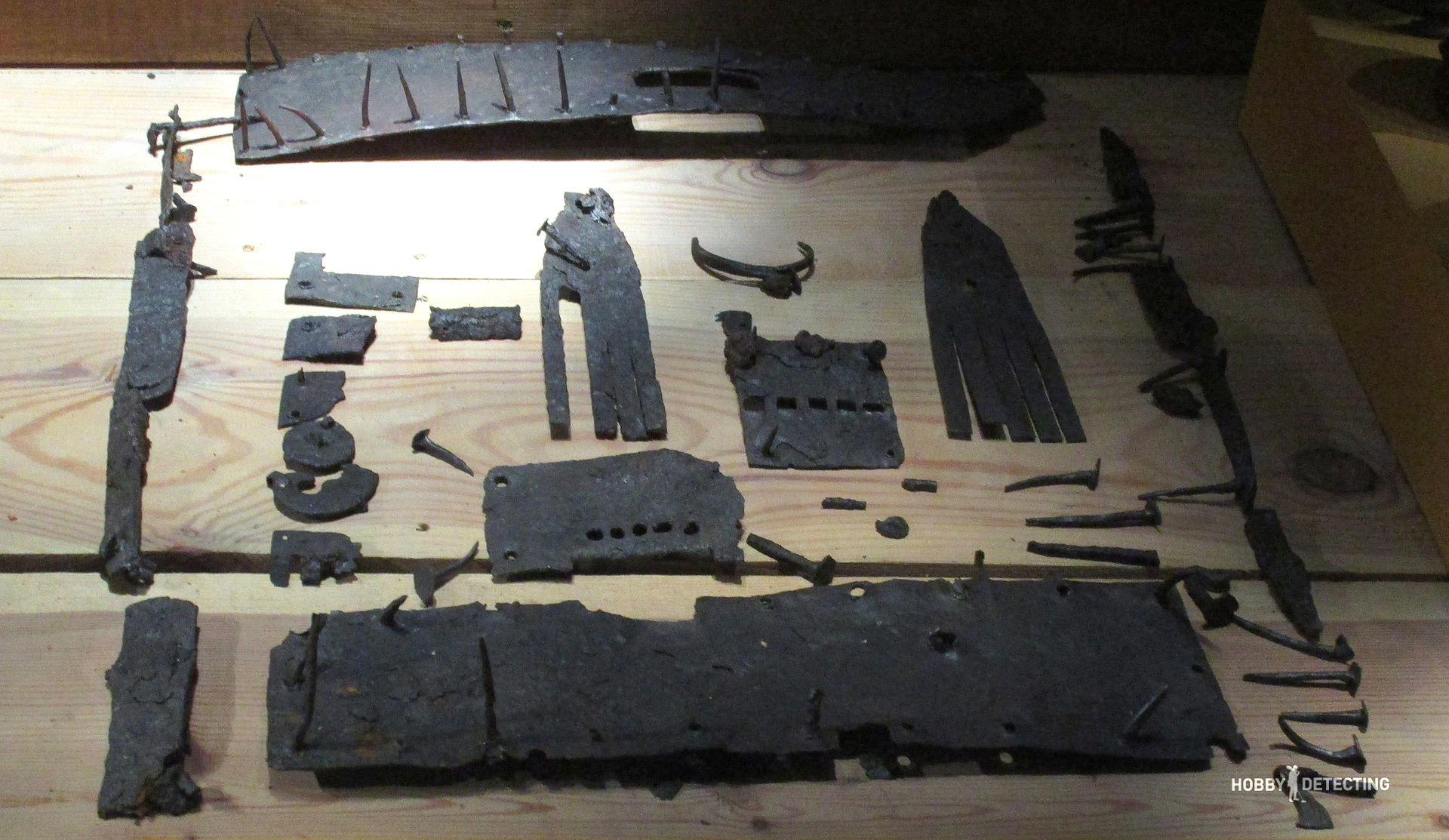 The land owner recieved 2,091,672 Swedish kronor for this find, at the time this was about 242 400 US dollars. In Sweden, nobody has ever got a so huge sum for a find! However, the real value of the treasure is much higher!

Here are some statistics: If you take the whole island of Gotland, by 2015 there had been more than 700 hoards of threasures found, containing silver objects weighing more than a ton, and more than 168 thousand coins. All these finds are dated back to the period from the 9th to the 12th century, the Viking era itself!

But let us return to the finds on Spillingsa. Archaeologists have counted 486 silver bracelets and fragments there. Most of these bracelets weigh about 100 grams. Many are made by local craftsmen and decorated with ornaments. There were also simpler items such as rings, used as payment.

Of the 14 295 coins found, 14,200 are Islamic dirhams, four coins from Hedeby, a Byzantine coin and 23 Persian. The earliest Persian coin dated back to 539, and the latest to 870. One of the most interesting and rare coins is the one called the “coin of Moses” from ca, 800. The inscription on this coin reads: “Moses messenger of God” instead of the conventional Muslim text “Muhammad the Messenger of God.” Here is the coin in the photo below: 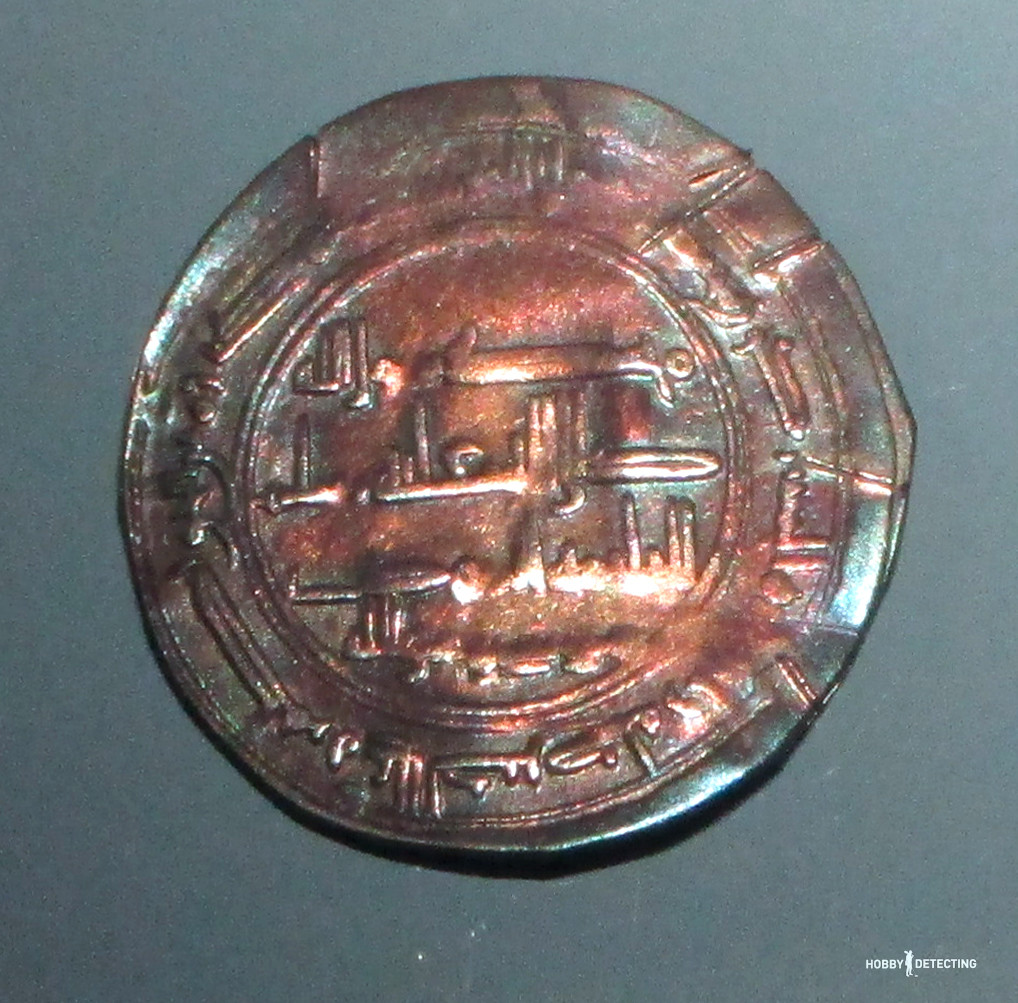