The French company XP Detectors, the same XPlorer, released two new white coils in 2017, both high frequencies. Do you want to know why you need a 56 kHz super frequency? Soon I’ll go detecting, to the place where the guys found “scale” coins, so my thoughts are cherished by the finding of the Medieval silver small thing with this new coil for my metal detector XP Deus, with which I will share with you answer the above question. High frequency is needed just for the selection of small things from fields that have already been passed with ordinary low- and mid-frequency devices in the interval from 3 kHz and up to 20 kHz (already less often).

Now, let’s take a look at the kit: 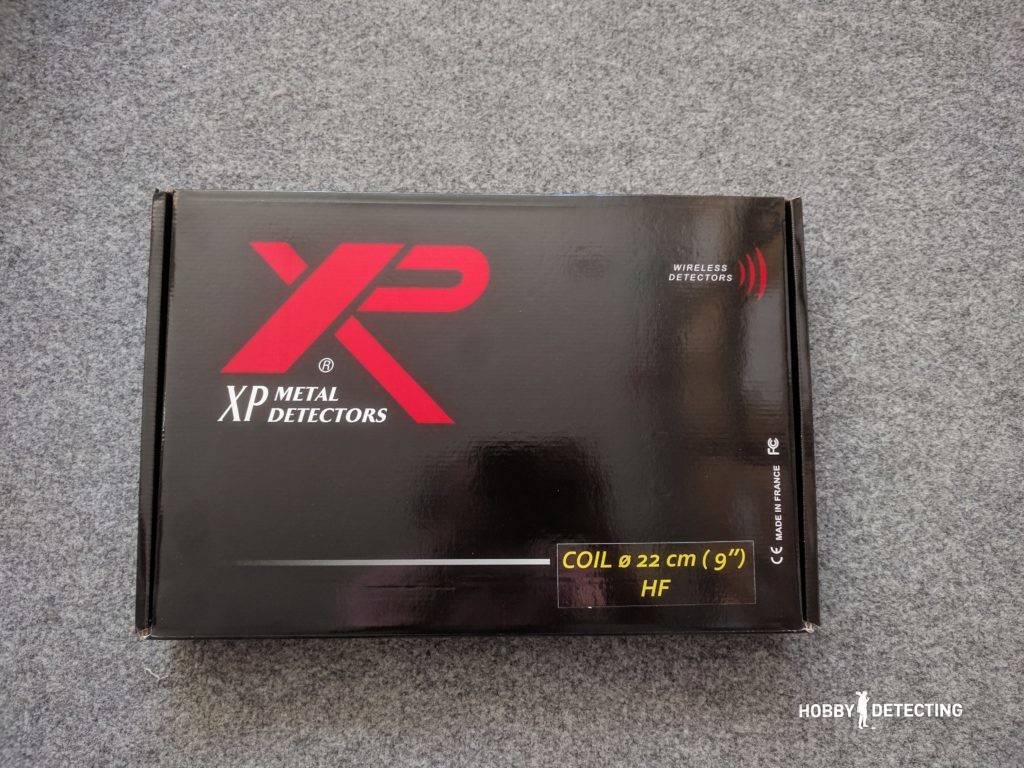 Ordinary box. In such boxes of black color with the XP logo, the company supplies everything from metal detectors to pin-pointers with coils. Let’s open this beauty. ? 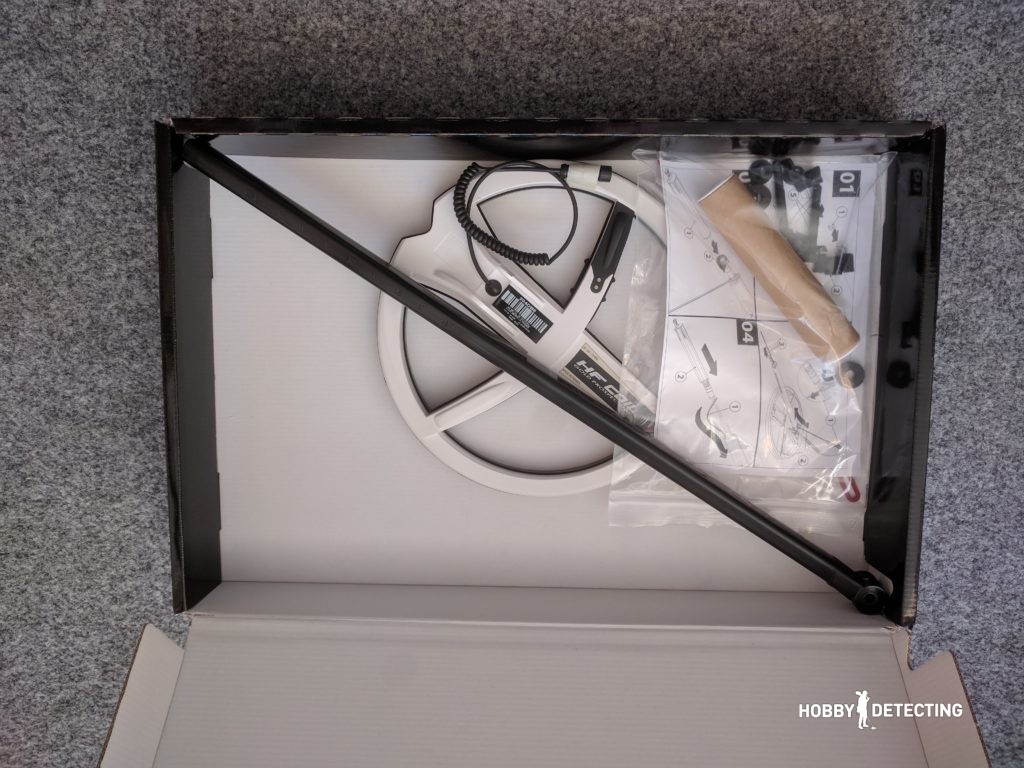 Inside the complete kit, which is necessary for use – a new lower rod, coil battery and the coil itself with a stock of sealers and coil bolts! 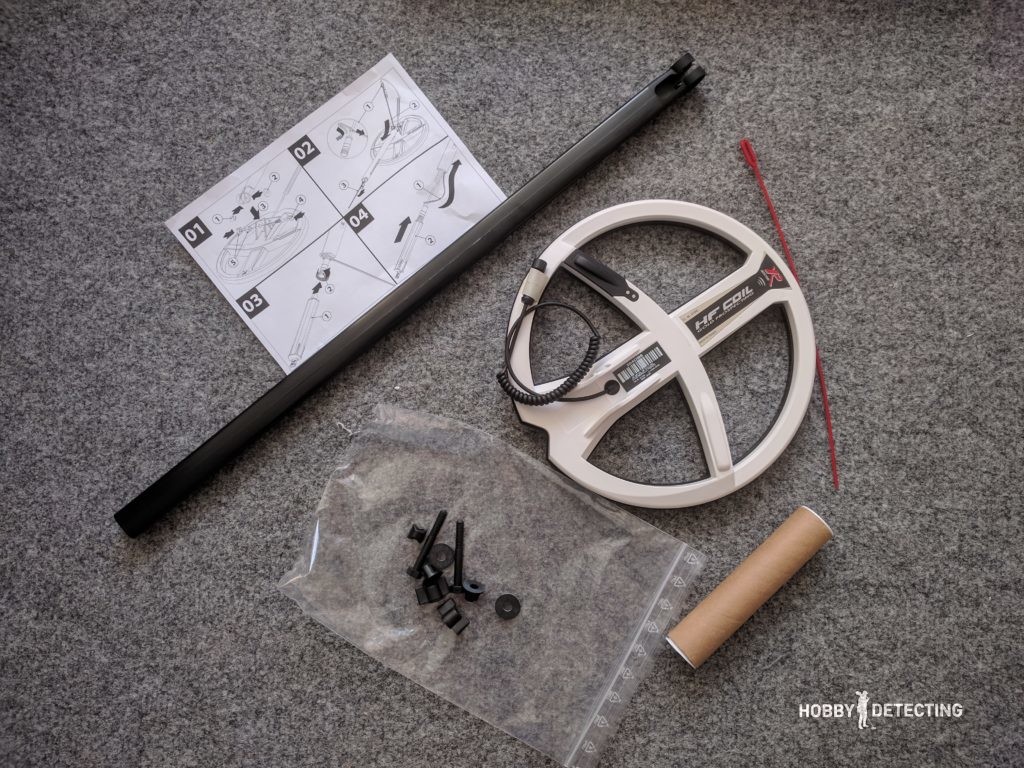 The stock, of course, pleases – prudently, but suddenly it will break or be lost, there will be no need to order new ones. In the kit, there is also an instruction with a description of what to do and how to do it, as well as a small looper to help extend the coil wire through the bar, and then attach the battery to the connector in the wire. After that, the battery conveniently hides in the lower bar, has a small loop, so that it would be more convenient to get the battery in the future (probably for a more simple replacement). I would not recommend such a kit to the water. 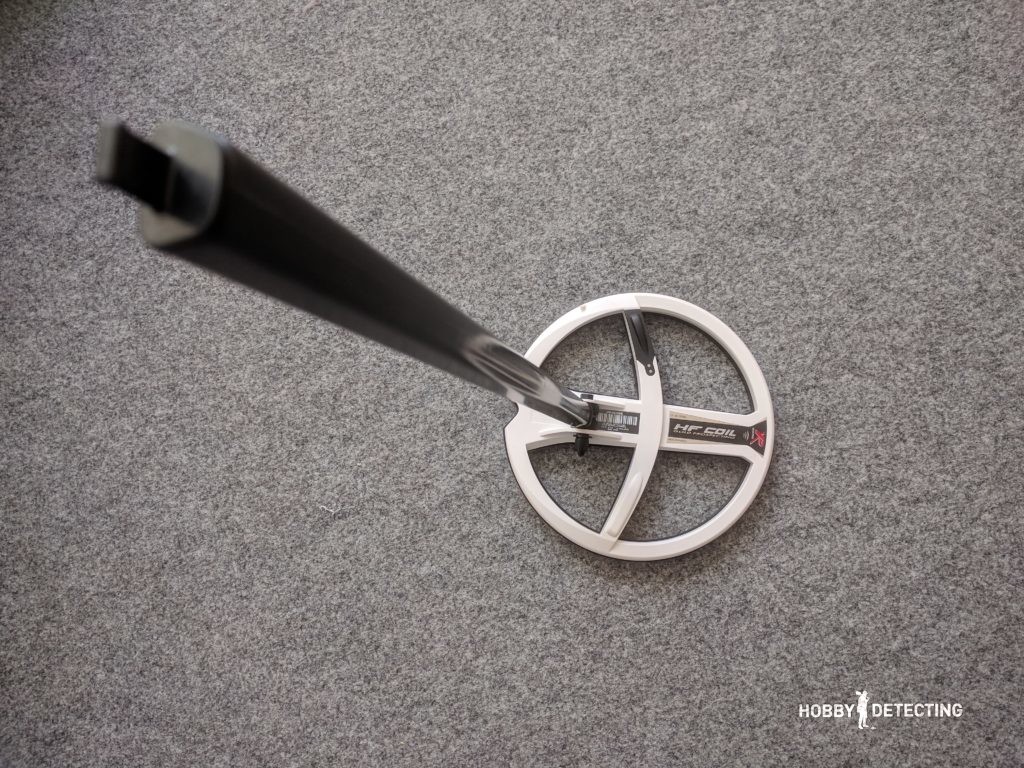 On the basis, it is such a simple design. There is no charger in the kit – use the standard from the Deus set. 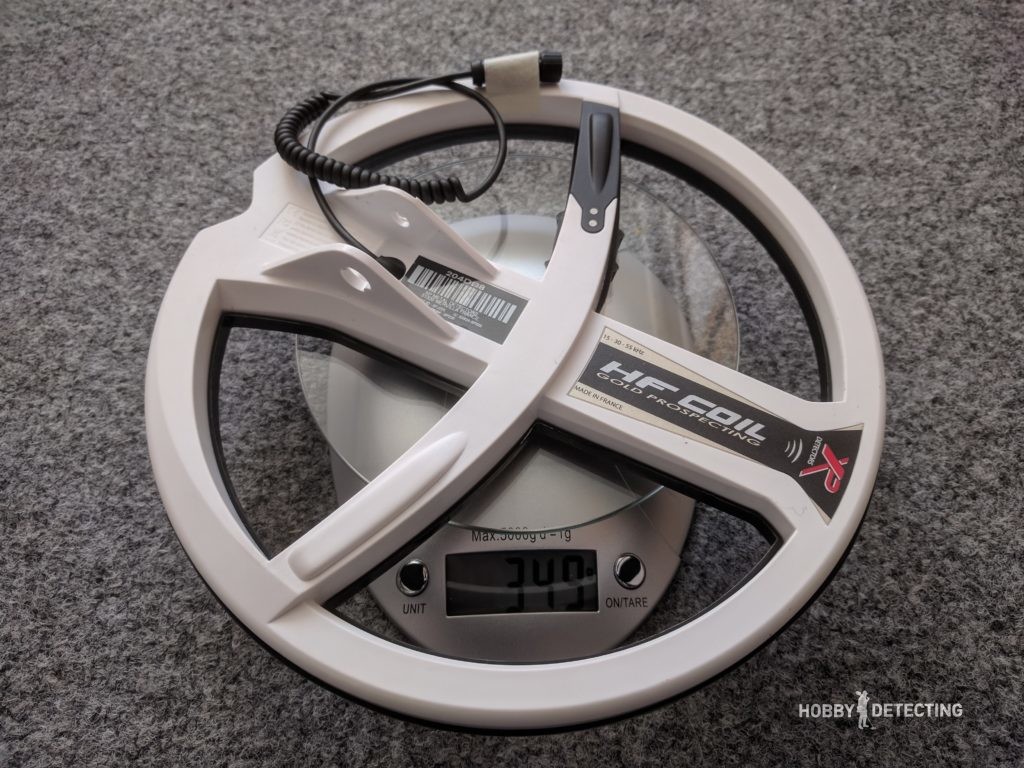 The weight, of course, without the lower bar.

The coil supports operation at three frequencies (without taking into account the frequency offset) – 15 kHz, 30 kHz, and 55 kHz.

If we take into account the frequency offset, then there are 21 of them! The battery capacity is 850 mAh, and this ensures the work of the coil on a full charge for almost 28 hours. Not bad, for a wireless coil with a battery.

Although it is written from the manufacturer that the coil can be immersed to a depth of 6 meters, but looking at its price, I will not risk anywhere to even bathe it. Maximum under the rain, probably.

In the room conditions (on the street the snow had already fallen), I conducted a small air test for three purposes: a gold ring, a medieval silver coin and 5 Kopeks from Catherine II. 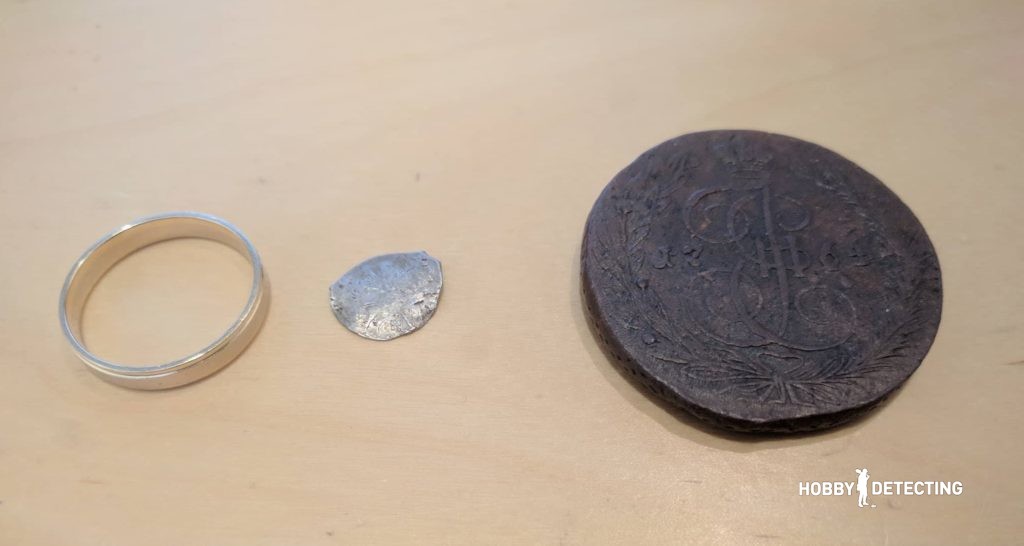 The frequency stood at 56 kHz. The result was interesting – 25 cm stable for all three purposes, but! A huge “BUT!” – the frequency shifts the indicators of VDI! Be especially careful with this and check before detecting the main possible in your place goals for the indicator VDI. For example, my golden ring at a frequency of 56 kHz showed 81-82, the silver coin showed 89-91 VDI, and the 5 Kopeks showed 98 VDI! Wow. It turns out that the high frequency of the coil allows you to better see interesting finds that need to be dug. Unfortunately, it was not possible to check for a big silver coin (it should be 99 off the scale, probably).

Soon I will add an update on the results of the first detecting on the site, where there should be medieval silver!

First Dig With The Coil!

I really wanted to quickly get in the first dig with a new coil. Even despite the bad weather (snow and storm), I went and I did not lose – because the weather suddenly somehow miraculously became better! The snow was melting, there was no wind, there was a little rain, which could prevent detecting on the field. 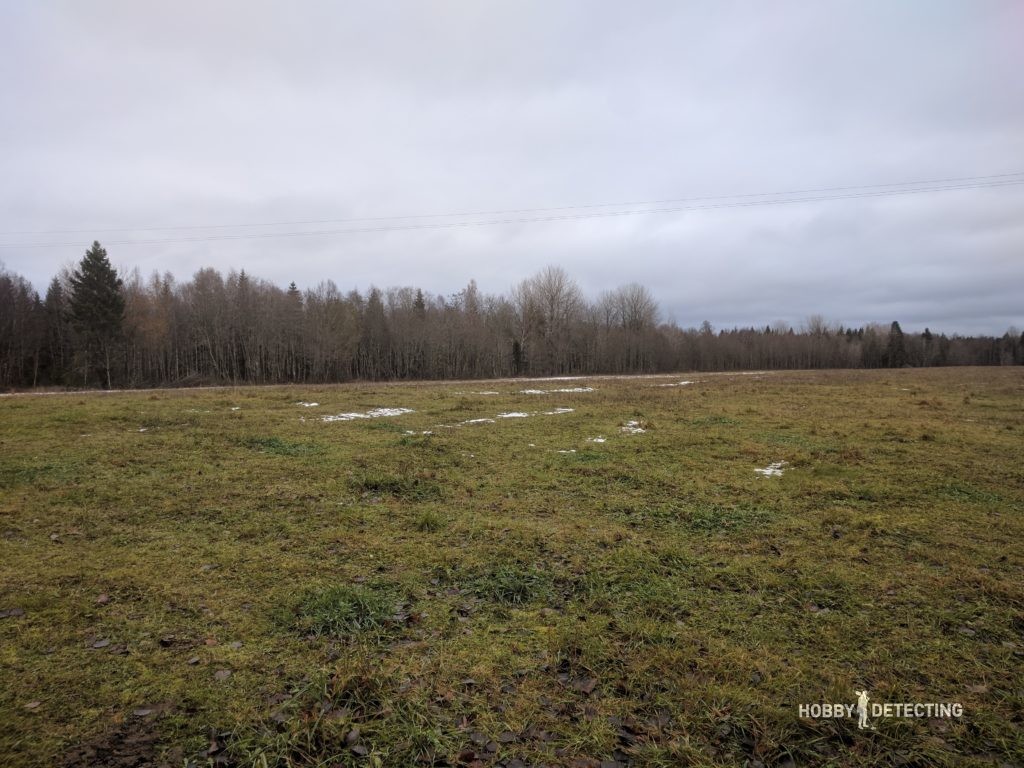 I finally arrived at the place. Usually, this is one of the fields I’ve been hitting for almost three years in a row! How many coins were found there, it seemed that there would be absolutely nothing to find! However, the hope to raise a couple of small silver coins to me very much heated my soul. What happened, here is the whole course of events:

First I went with the edge of the field, a place completely littered, there is a lot of modern junk. I carefully listened to each signal. I went at a frequency of 54 kHz, and at this frequency, the VDI very much biased. The horse’s bell rang first. And rattled in exactly at a VDI of 97! 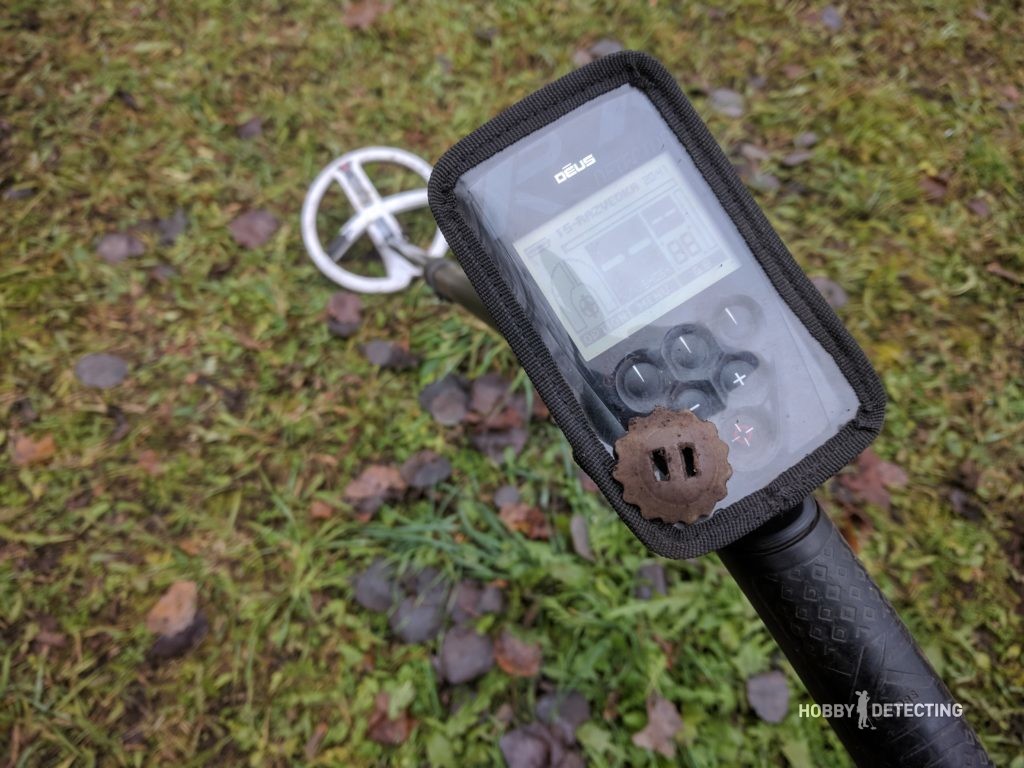 The find was beautiful and in very good condition! 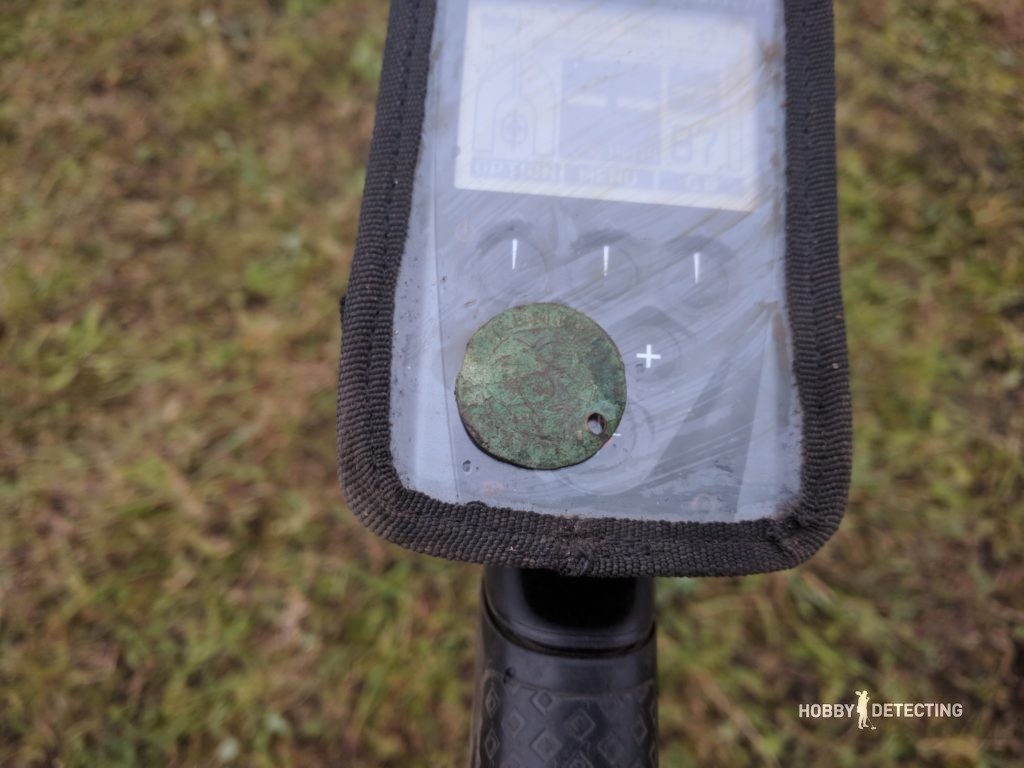 Then a silver token came out. The impurity is very poor quality, the signal was also incomprehensible, but at least at a high frequency, it was clear that the object is, although it is thin as a foil, but lay at a decent depth for a high frequency – 20 cm. This was a Nuremberg Counting Token, from the 16th or 17th century.

Further, on a more shallow depth, I found a small silver slice, which, on the whole, was broken off by a small medieval coin. Again, at a normal frequency, such a signal goes into the metal, and in this case, it was possible to hook the signal and accurately identify due to a high frequency of 56 kHz! 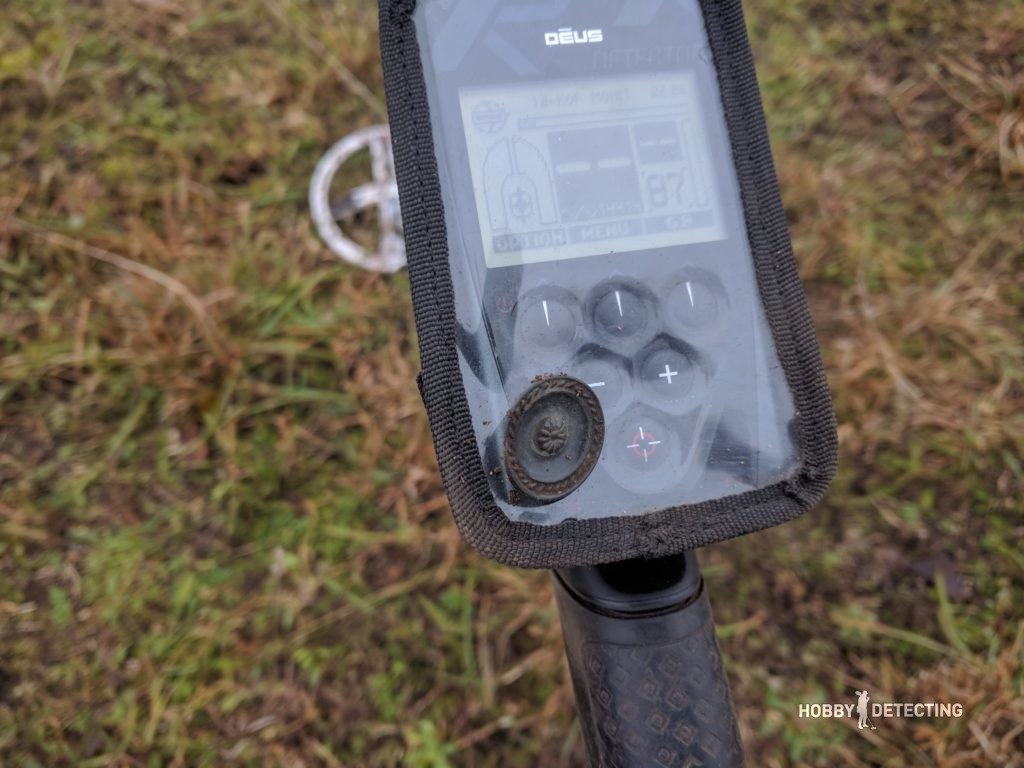 Then I got a beautiful button. Interesting pattern, good condition, depth, too, was quite large for 56 kHz – about 25 cm. 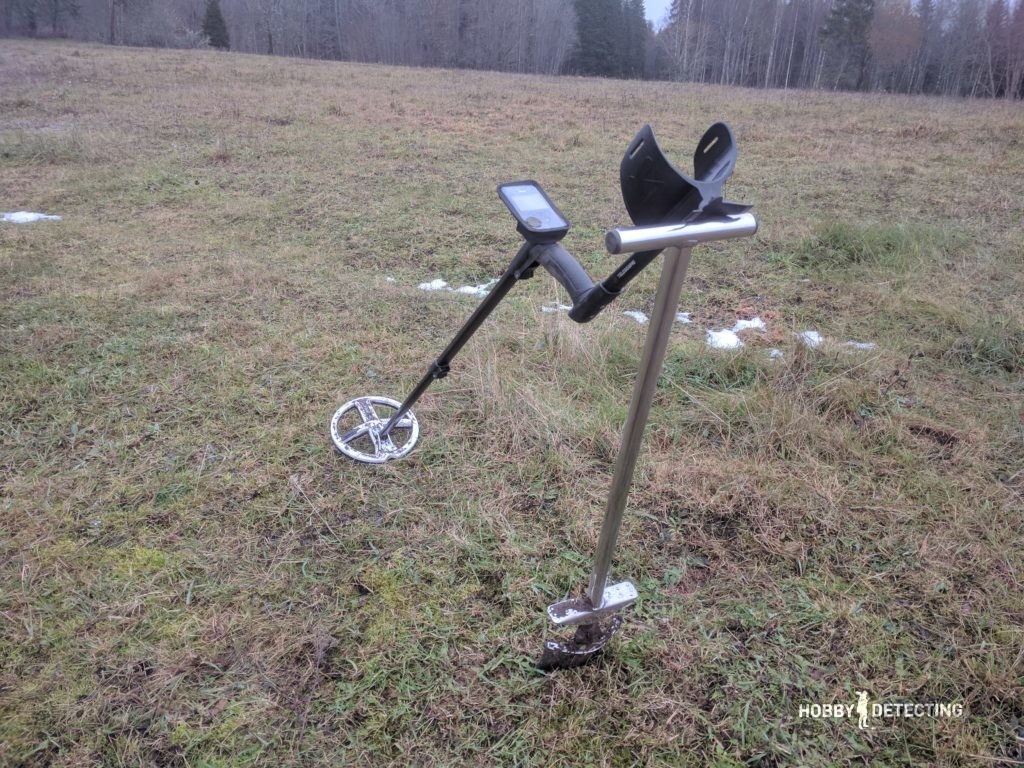 At that time, I was already quite far away from the trash and decided to switch the frequency to 14 kHz. What is the bonus of this coil – it is very versatile! If it had only two frequencies – 20 and 54 kHz, then it would be very difficult to decide on its purchase, but with a third – 14 kHz, this coil can already be easily used for conventional detecting by coins and reconnaissance. In the forest, it will be very good, in the field of the stubble, too, and all thanks to the size – 9″. 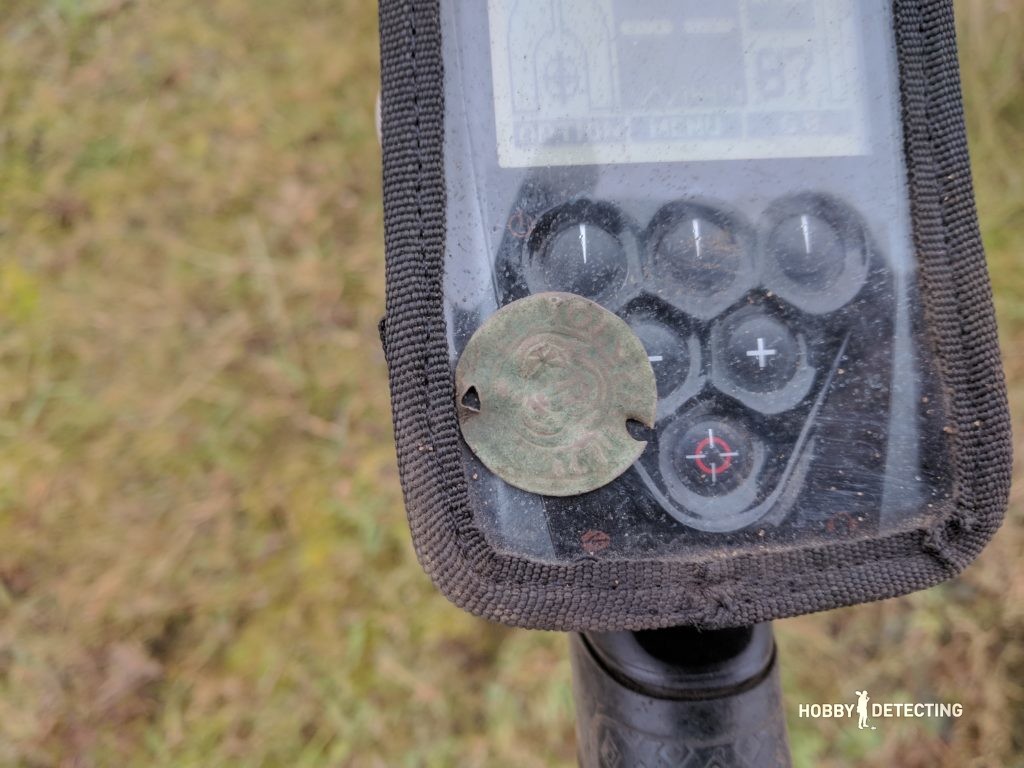 Switching to 14 kHz, I almost on the surface picked up this, second already for today, counting badge from Nuremberg, but release this one was then the first – the XVII century. It is a pity that it has holes, it looks very nice for a token, which is more than 400 years old! 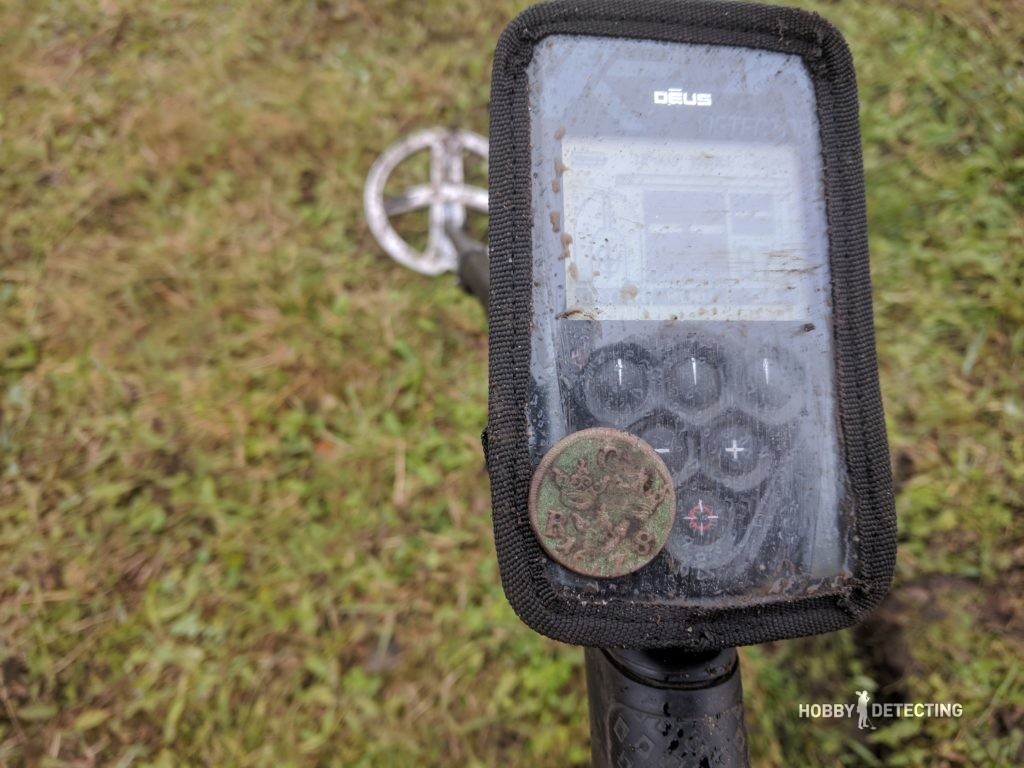 Next was a series of digging out various questionable signals, which did not bring anything sensible. In general, even with such a coil, the Deus is a very sonorous device, its sounds need to be accustomed and adapted because this cacophony of different sounds can shock any beginner! Of course, especially on the trashy places, you quickly get tired of such an abundance of sounds, because it’s hard to work on a trash for longer than two or three hours.

But at the end, a standard copper signal emerged – both sound and VDI (94) said that under the coil there is an old copper coin. A very good signal, right to say – a reference for any metal detector! The coin turned out to be a Swedish 1/6 Öre, from 1667. A beautiful condition, the field did not disappoint! 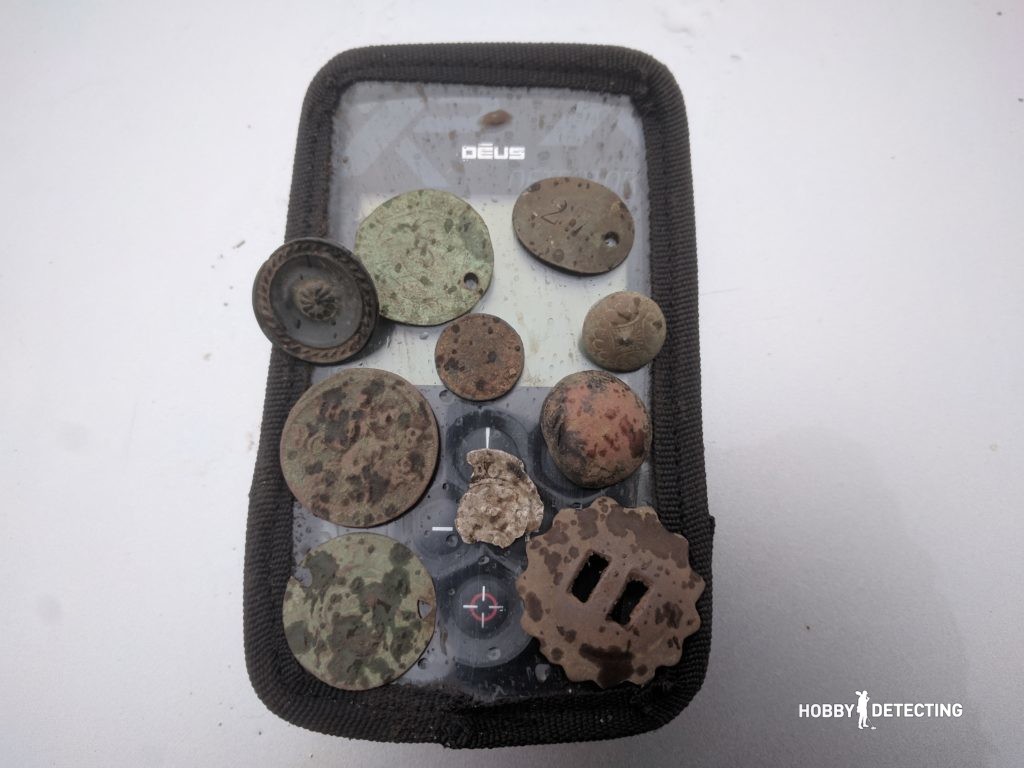 A small result of the detecting. The small silver coin, which turned out to be broken, is in the middle. Then the copper Swede of 1667, two counting tokens from Nuremberg from the XVI and XVII centuries, different buttons and horse stuff. There is also one Kopek from 1973, also got out with a rather big depth for it.

The coil showed itself pretty well! I was even glad that at one time I did not buy the Deus with a 9 “coil because now there is no need for an ordinary black coil at 9”. With a large black coil you can walk through the fields and find places of concentration of coins, and then you can take the white high-frequency coil to finish off the place. I thought about selling my 11″ coils for Deus and buying a big one because 9″ is even more stable and with it, you can walk on sensitivity 95 or even 97 without any strong phantom signals and fatigue.