On the photo above you can see four tags from the 118th stationary artillery battalion found in a bundle. These are so-called “unused”. These tokens were not given out.

Today i am going to tell you about dog tags. In the German terminology this object is titled Erkennungsmarke.

Any self-respecting WW2 digger has eventually found a German badge, and sometimes more than one. In the memory of many of us, this is something to remember. My first discovery took place in my first season. Back in the days i did not have my own detector. I joined a search party as a volunteer.

The first badge, I found in the sand. We dug on the sandy shore of one island by the cold Baltic Sea. The German kept a strong defense here in the autumn of 1944. A badge appeared, and it turned out to be a lost one. I still remember this badge, although the numbers are now erased from the memory of my mind. It was in a nice condition and from the battalion JEB – Infanterie-Ersatz-Bataillon.

The following season, my fellow diggers found the remains of a man with the badge LANDSCH. The dog tag was handed over to Germany. We found of course, not only the Germans, most were Soviet soldiers.

Since then, my interest has arisen in deciphering German dog tags. By the way I can even recommend a book on this topic – «Deutsche Erkennungsmarken», author Jean Höidal. A lot of pictures.

For the lazy, non-German speaking people, you have the internet.

A standard authorized dog tag should contain the name of the training in the center. The long number next to it is most likely is a personal number fighter, and the letters 0, A, B, AB is the blood group. The same inscription is duplicated on both halves. 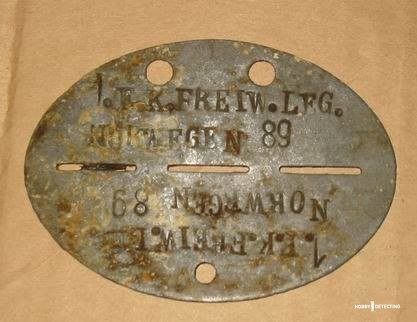 The Teutonic Ordnung ordered to bury half of a token with the body of a soldier and t send the other one to the archive for reporting. In the woods, where the Germans did not have time to do so, you will find a soldier with the whole dog tag, though not always. In the Red Army it was practiced to collect personal documents and tokens and bring it to the intelligence. It is difficult to argue how useful they were for this purpose.