This story was sent to us by a lucku digger

It was a warm, sunny morning in July.
I like a man, then a student at the university, was on vacation and decided to go on a bike to dig a field, which previously bore fruit. The very first time I detected there I found 2 silver coins. 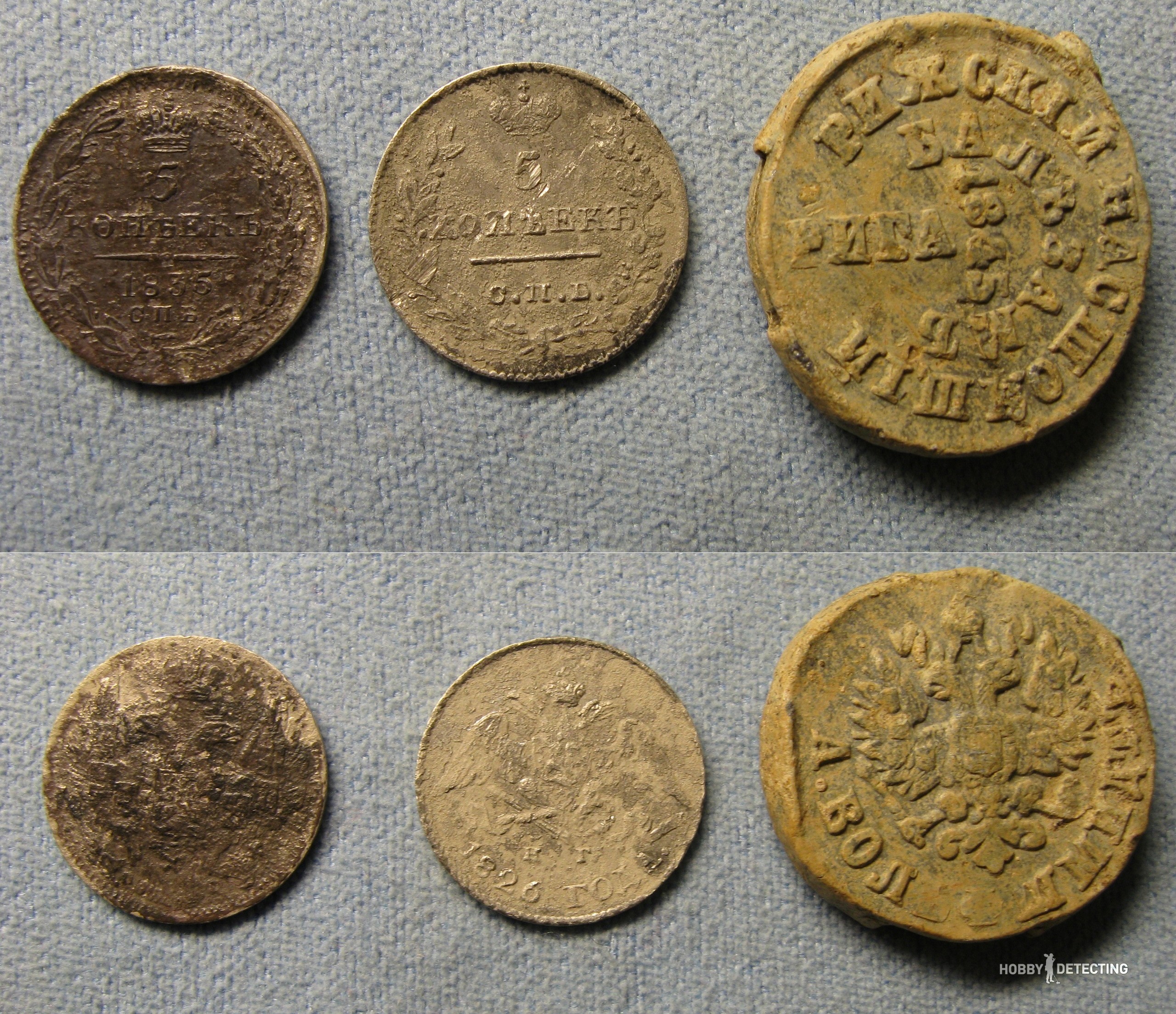 The ride was about 20 km in one direction. On my way there everything was good, but the way back was a little harder because I was a little tired.
I started digging as soon as I arrived, but I did not have an especially result this time… 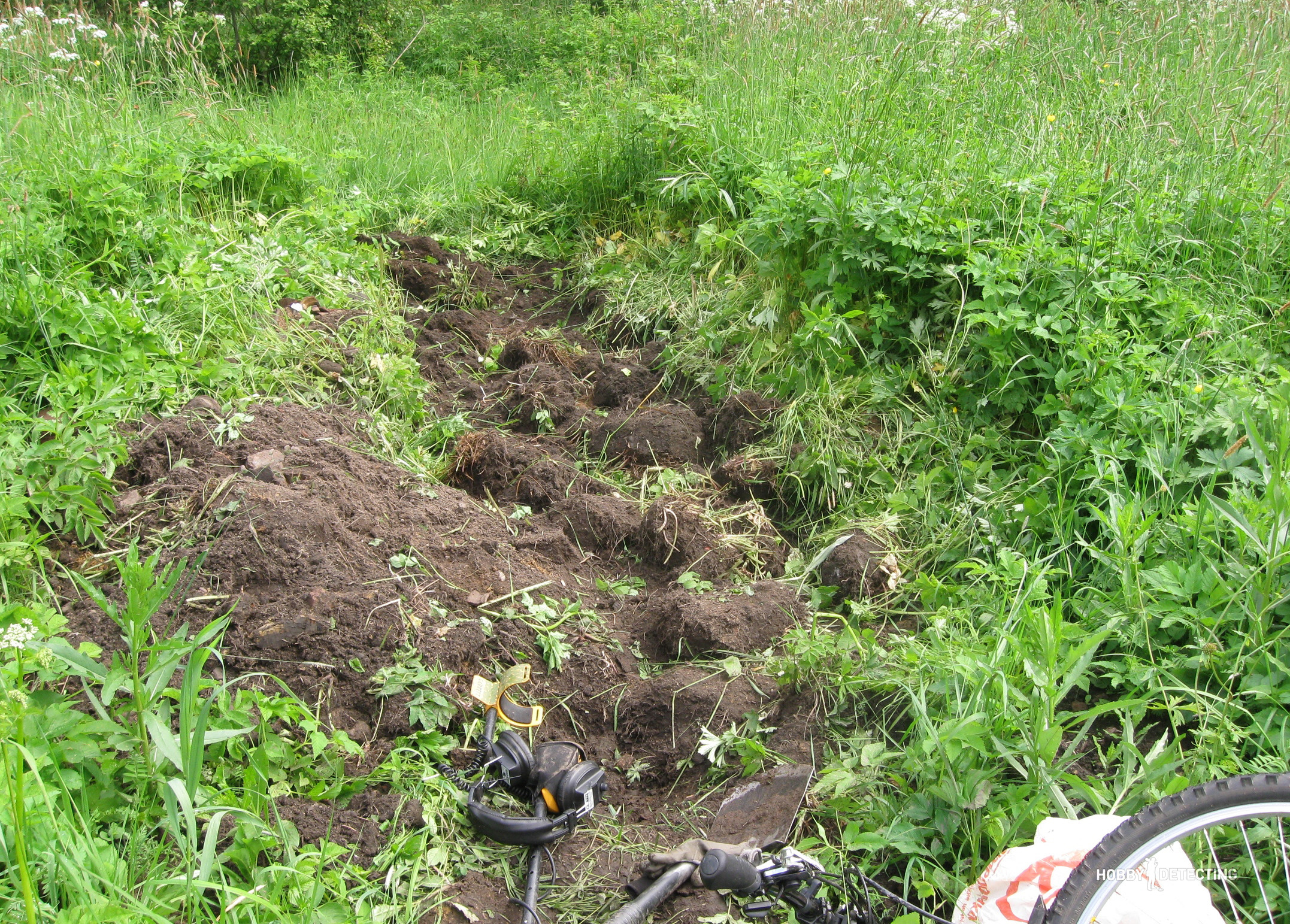 I found a small coin, all in oxides, I took a picture of it and put it away (later at home I could not find the coin, a mystery where it went). 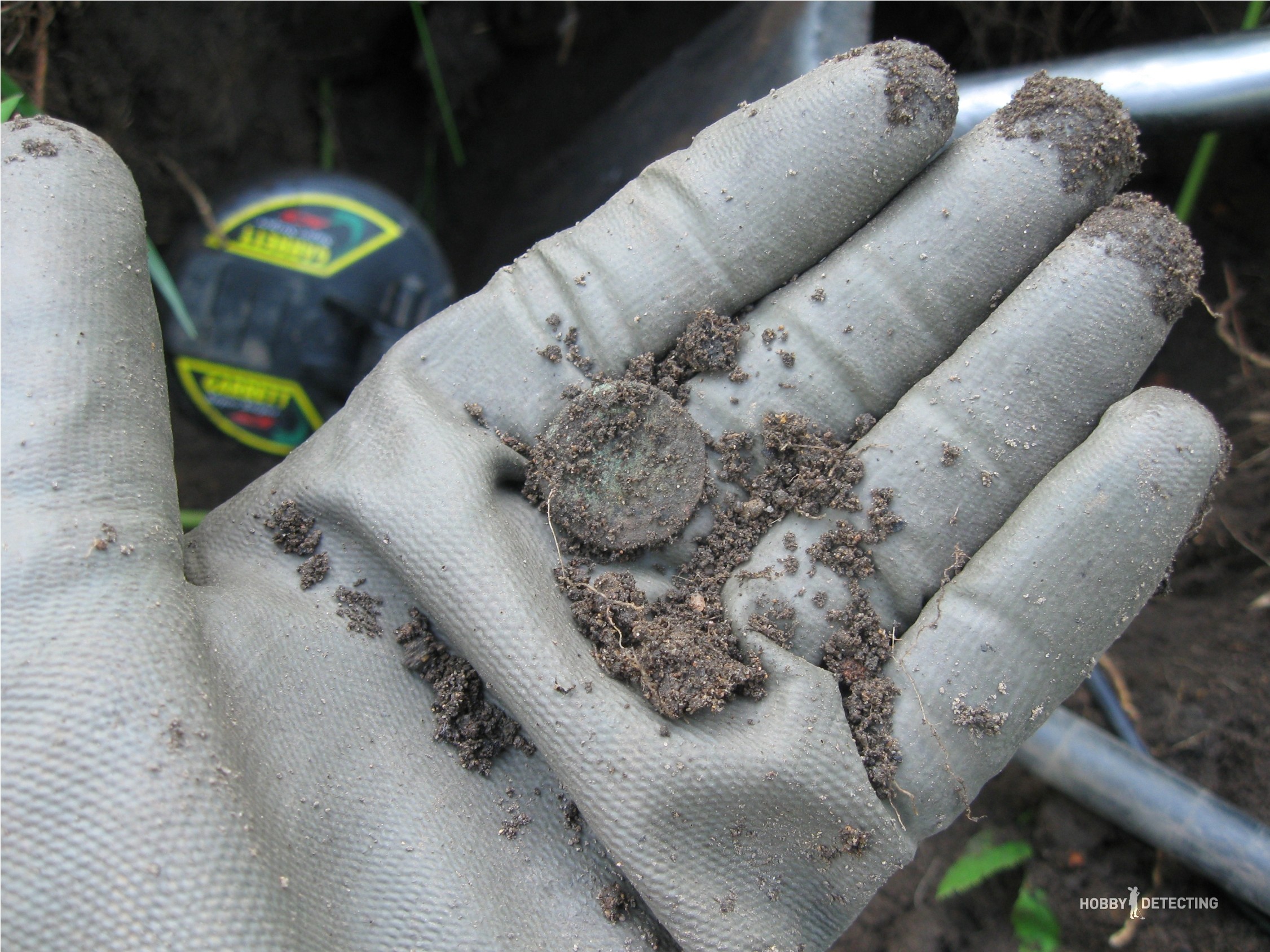 And when I started to dismantle the foundation stones, I found a 5 kopeck coin from Nikolay the 2nd between two stones! 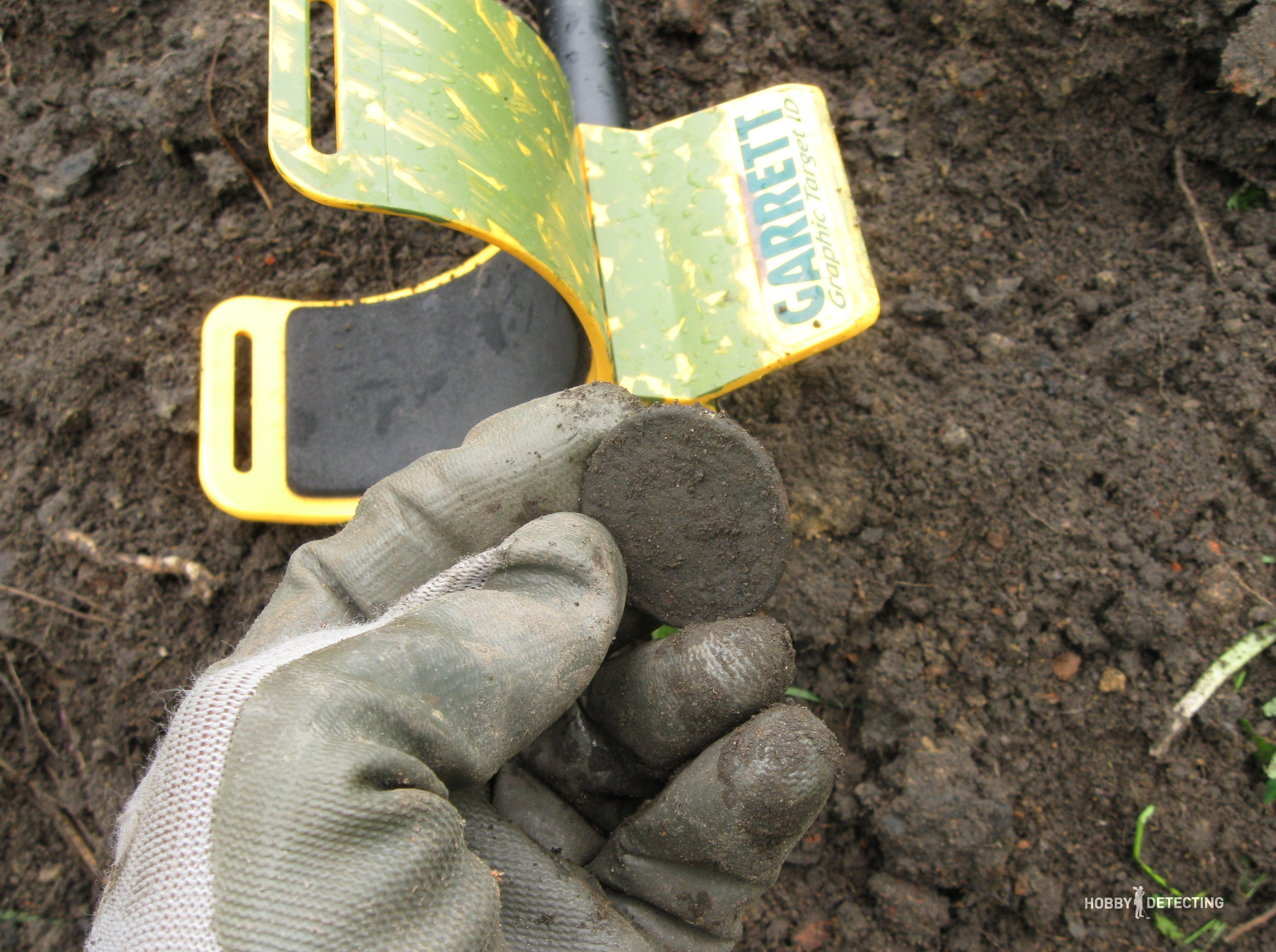 The next coin I found turned out completely black …
After a little rubbing whit my fingers I realized that it shined! 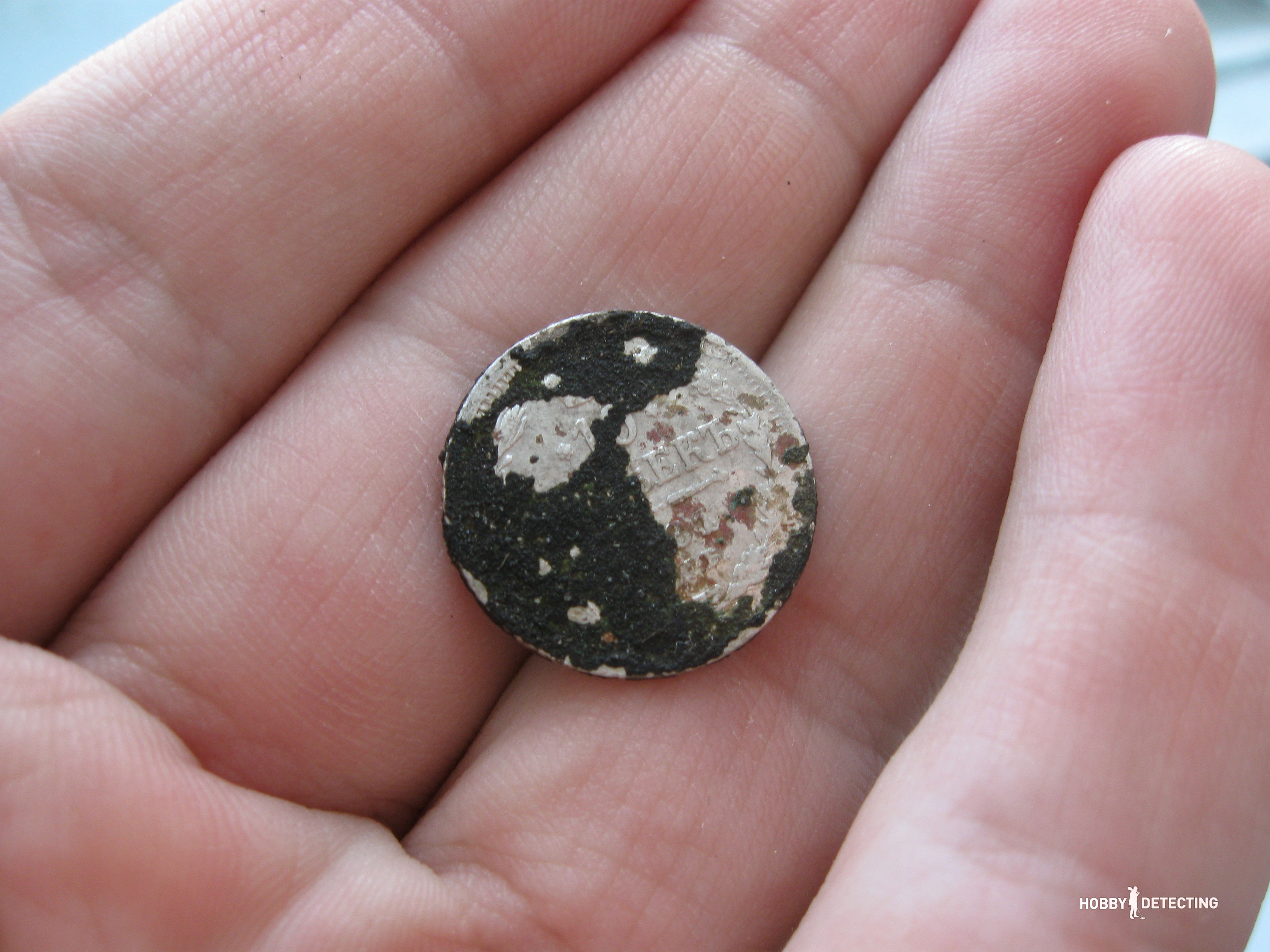 Yes, silver again!
When I arrived at home I threw my coin into some ammonia, which perfectly removed oxides and this is how the coin began to look afterwards: 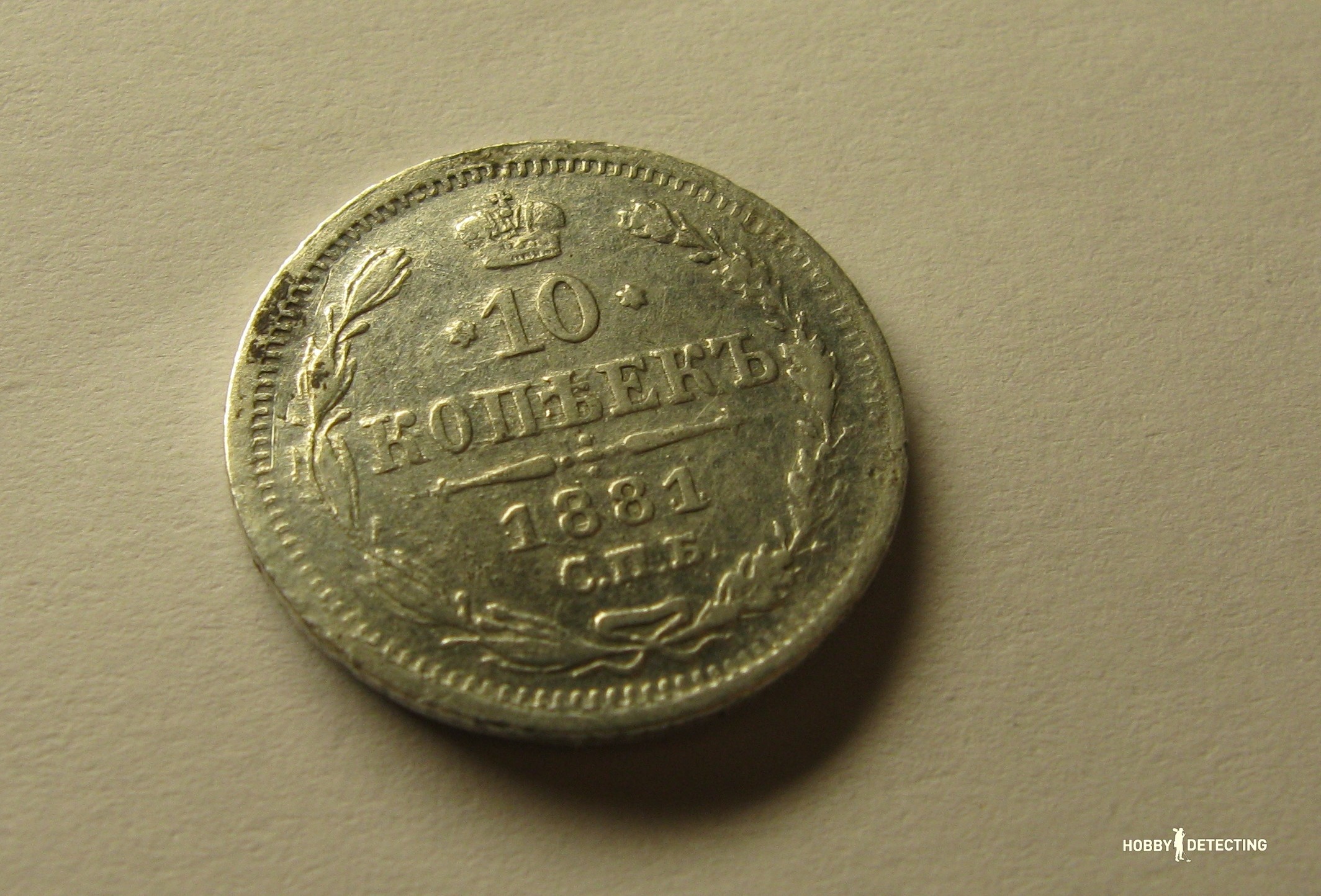 But back to the field …
After these small but pleasant finds, I started digging out only the usual rubbish.
After nearly 19 hours, it was time to go home, but something pulled me finally to make a small hole next to the foundation …
Probably you know, it happens sometimes that you get something like an inner instinct … I have had it several times, and always I have had unexpected finds.
I dug a small square area the size of the digging tool, because then I had the Garrett sniper coil (very cool coil- I regret selling it).
The detector showed a steady signal, like a simple copper cross, that is short, about the middle of the scale.
I, of course, thought it was some garbage again, because for copper and silver the sound is usually higher…
But I always dig these signals, even if they are unstable (except for iron signals, of course).
I started digging and suddenly I found two “blades” in the shape of a cross – “What kind of cross is this?” I thought, and began to look in the hole for the other parts because they still gave a good signal on my detector. The cross was now assembled. 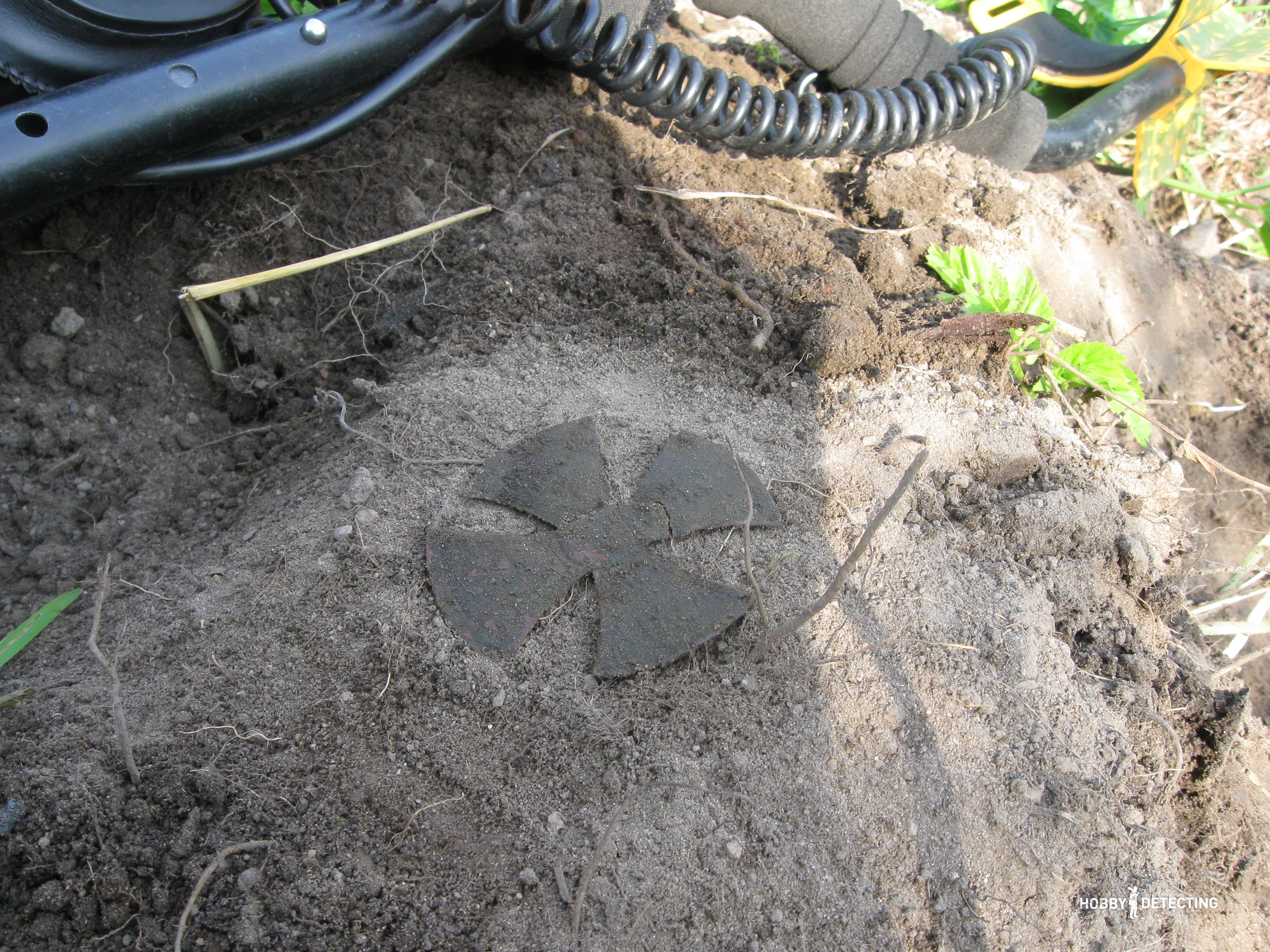 I, frankly, did not know about such objects, so I photographed a strange cross, put it in my bag, and started going back home…
When i arrived home, first of all, I changed clothes, and went to wash cross.
Because of the oxidation on the cross it was kind of hard to read what it said, but here Is what we could read: 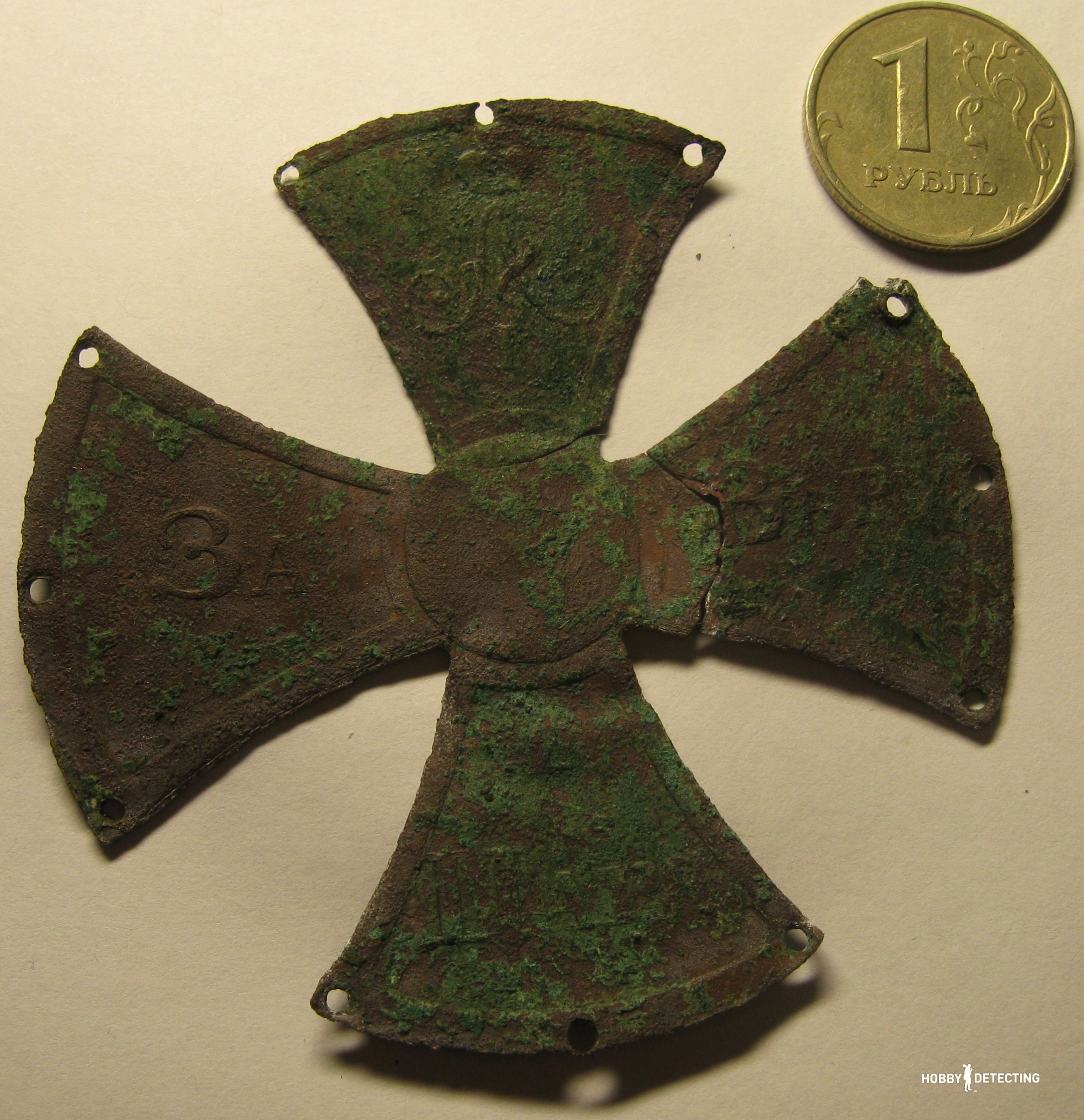 From above there was a monogram under a crown.
“This looks like a Georgian cross, but with more inscriptions!” I thought.
I started looking on the internet to find out what cross I had found, but I did not find it…
I went to a forum, I posted the photos and asked what I had found…
People instantly began to congratulate me with a very, very rare find …
It appeared to be a military cross by Alexander 1 issued in 1812!
It is very rarely seen in collections because it allegedly easily breaks
In my case two of the “blades” broke off, but I found them right by the cross.
The more I was looking for information about a find, the more surprised.
Needless to say, I looked at different auctions but I never found anyone selling one.
Realizing the value of this item, I began to think of a light cleaning for it. I carefully cleaned it in soap. After this the text became more visible: 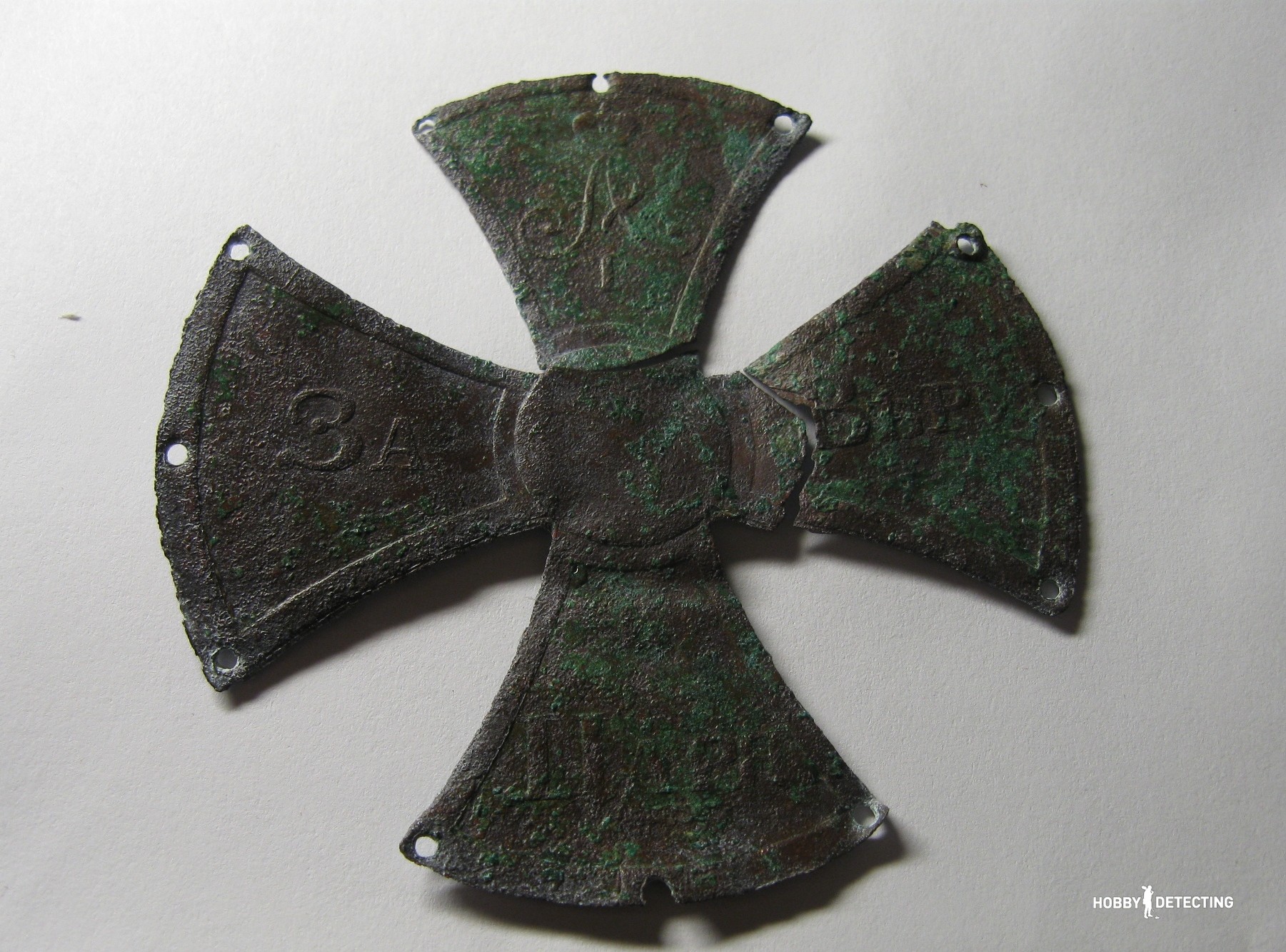 Then, according to some kind of technology, I cannot remember where I read this, I dipped it in alcohol and dried it: 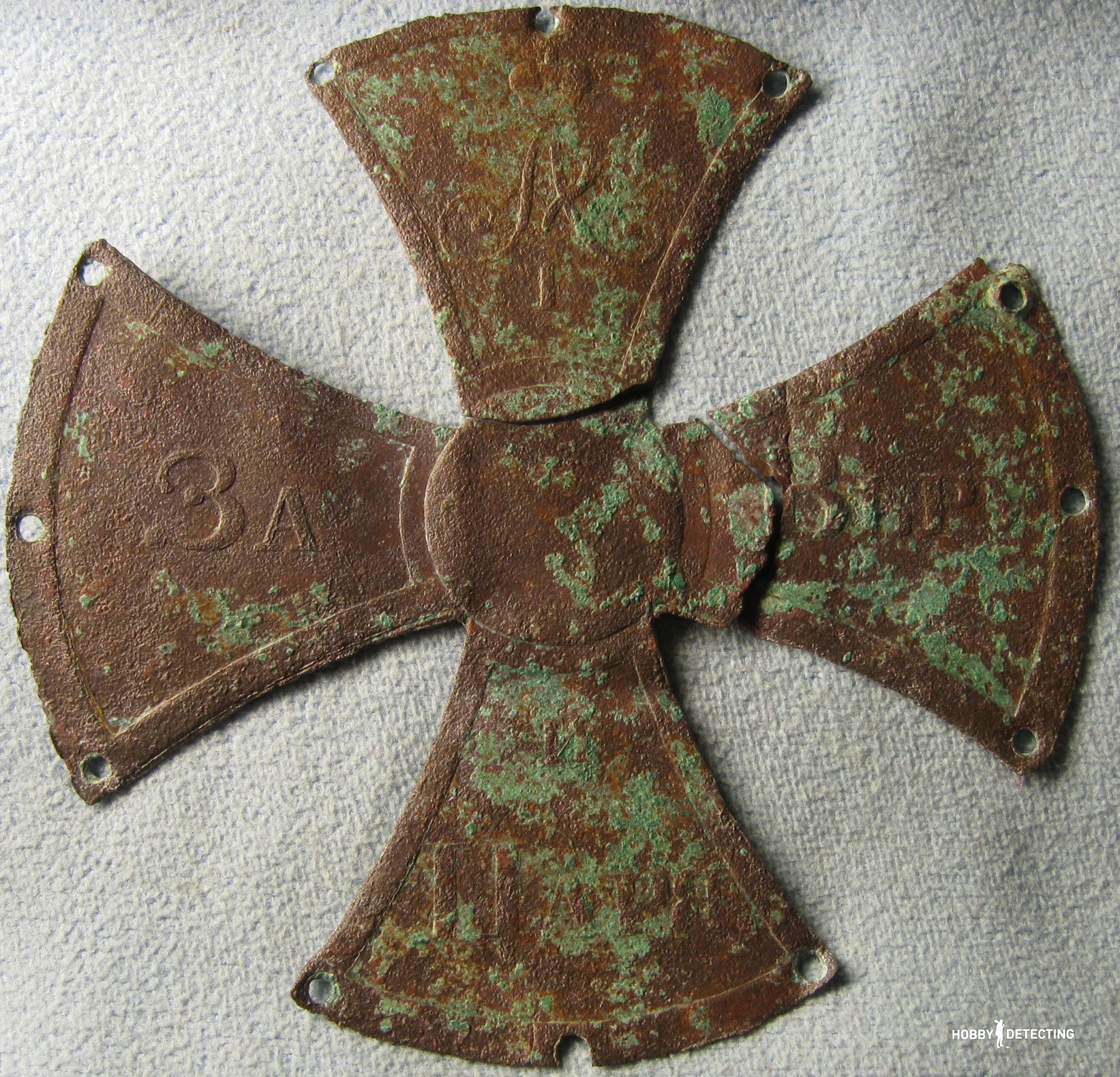 And after all this I dipped it in Benzotriazole and dried it once again. 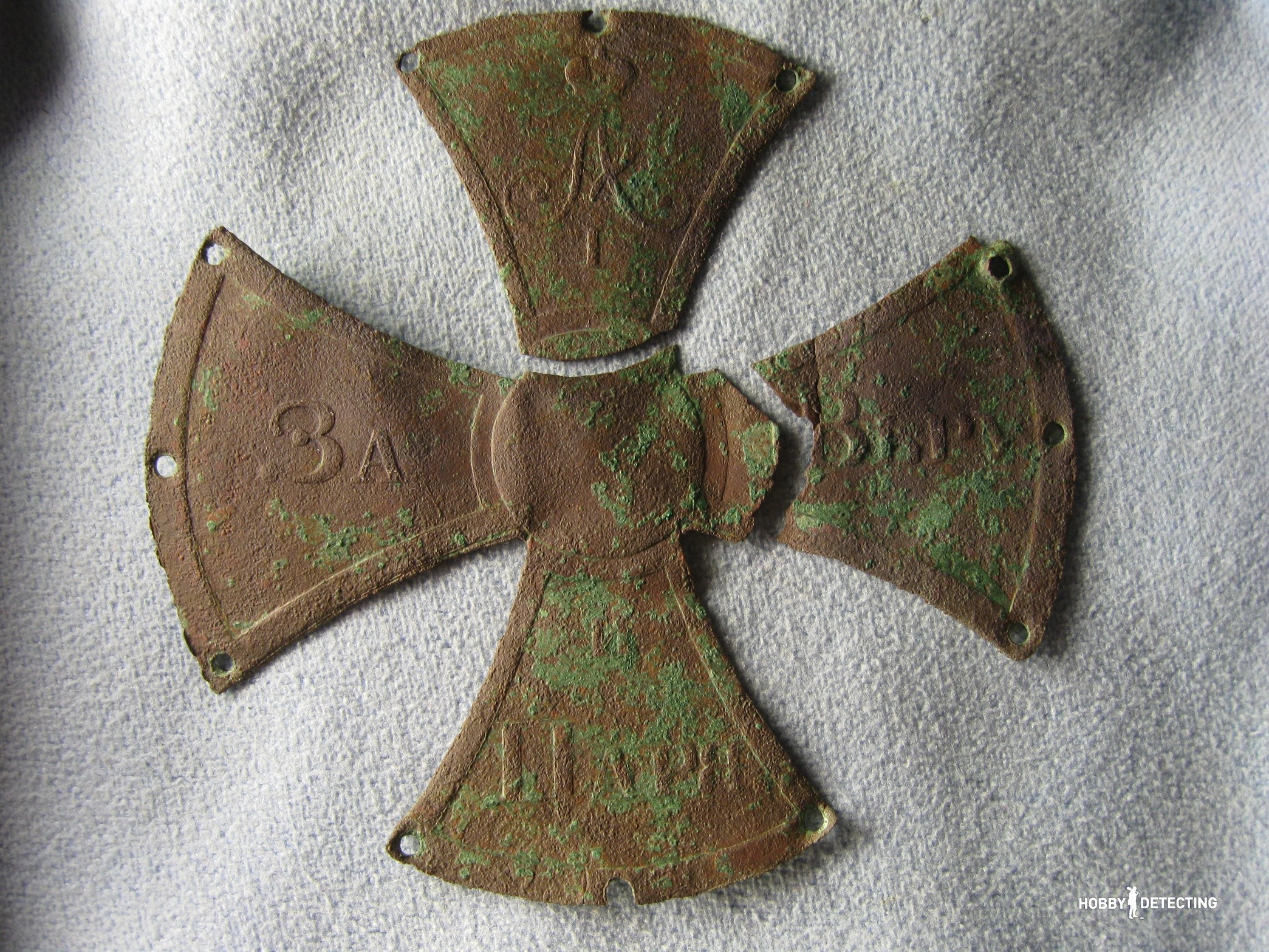 It turned pretty good I think, because my main intension was to not damage it!
Of course, I’m not a professional in preserving relics so I would gladly have some suggestions in the comments:)
This find was made with the Garrett ACE 250. So it is not the detector that plays a key role in having a good find. This find for me, still to this day remains one of my most valuable finds.