I was recently on a trip to Germany, and long story short, I didn’t bring my Fisher F75. But fortunately, my friend had a detector. It wasn’t quite the F75, it was an ACE 150 with the standard coil. “At least it is better than nothing”, I thought. And I was certainly right.

So, after arriving to Germany, me and my friend Marco Schmitt, who I was visiting, went out in search of a location to detect. This happened somewhere in the woods of upper Bavaria, not revealing my detecting location of course 😉

The first day we were somewhat all over the place, trying to find good detecting spots.
Firstly, we went to a place where there had been an old path somewhere in the area. There had also been some battles in the area during the German war of 1866. We had no idea where exactly these locations were, we just knew approximately the location inside an area 1 x 2 kilometers wide. We wandered around there for about two hours without practically finding anything else than rubbish, some modern cases from hunters’ bullets and a couple of pieces of lead, which we found at the very end of a field.

After giving up that place, we went to a new place where we knew there had been people at least in the 20th century. Except one German “Mark” (Their former currency) from 1972, a piece of bronze jewelry from the same time period, and a lot of rubbish, we did not find much. We quit this location after 1.5 – 2 hours of trying.

That day we went home empty handed and a little disappointed, preparing for more planning and research.
When we got home, we looked at our finds. Not much to show, but we washed the finds anyway. I started washing the coins, and my friend started throwing away the rubbish. Suddenly he calls me over to him. “Hey, these lead pieces we found at the end of that field kind of reminds me of bullets!”, he said. 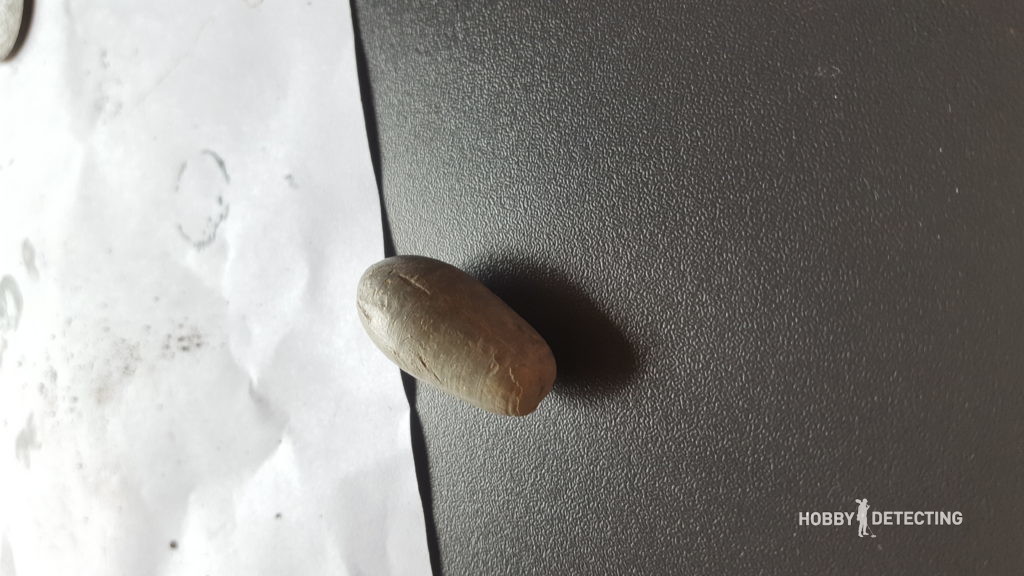 “What if these are bullets from the war of 1866?”, I asked. “I don’t know, they kind of remind me about modern bullets, but also somehow they look like musket balls.” My friend said. We decided to give google a try, and I found out what they were after just a couple minutes of searching. The result surprised us both.

We found out that they were lead bullets from the war of 1866 between Germany and Austria. The bullets were from the weapon “Dreyse-Zündnadelgewehr”, used by Germany during that war.

Just as we started detecting on the edge of that field, the bullets started appearing. Too bad that we decided to quit then the first day, because it clearly was a battlefield from 1866. We both agreed that we would return to the field the next day. 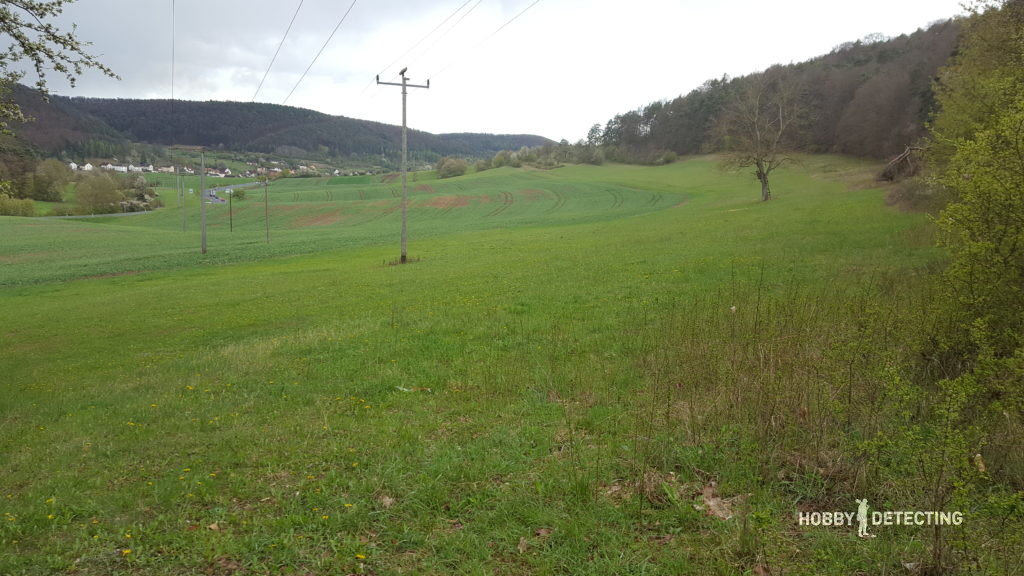 Here you can see a photo of that field.
The next day we started detecting on it, and the finds started appearing one by one. Keep in mind that we were using the ACE 150, so the whole detecting process was a little slow with all the false/ghost signals, in addition to the well-known “bell” tones of the ACE. It did not help that the ACE 150 has no “pin-point” function, and that we had no pin pointer probe. Luckily, the ACE 150 has a pretty small coil, so the holes we dug did not turn out too big. Of course, as respectful detectorists, we carefully filled all the holes after us, and took with us all the trash we found. 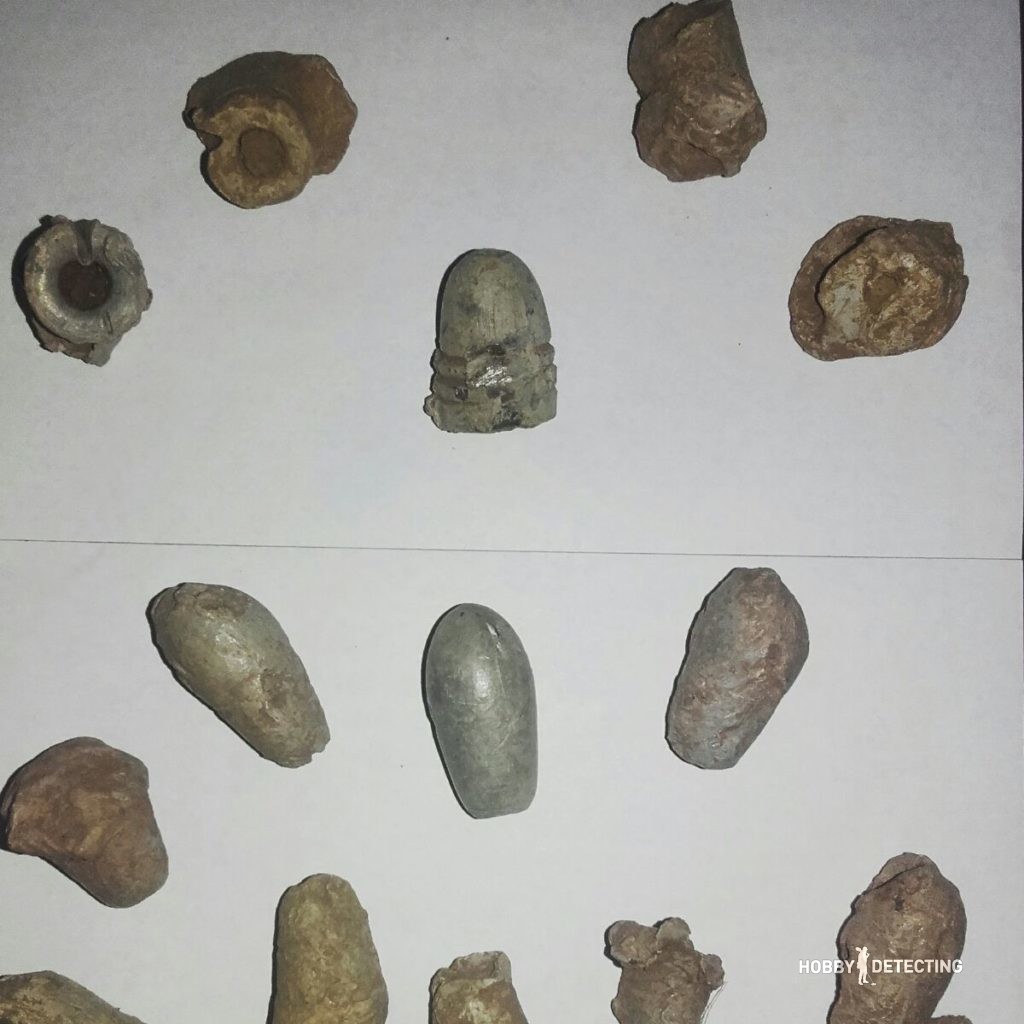 At that field, we found all kinds of bullets. In addition to a lot of “Dreyse” bullets, we found some musket balls and a lot of other bullets from that time. The bullets reacted very high on the scale of the ACE 150. We found a lot of interesting things that day, but my favorite find of the day was probably a “bayerische löwenknopfe”. 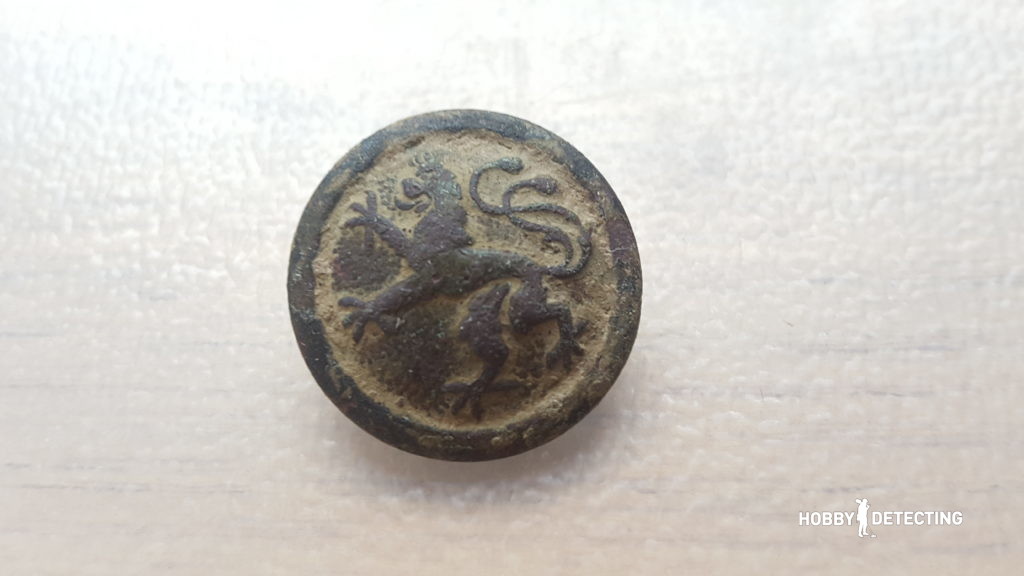 This find was a pleasant surprise! This is a Bavarian military button that the Bavarian soldiers had on their uniforms during the war of 1866! By the way, the Bavarians were on the Austrian side during the 1866 war, against Germany.

The next time we went detecting, we decided to try the same spot. We went a little further up on the field, and almost at once we started finding coins. There was all different kinds of coins, like for example the ones shown in the picture: 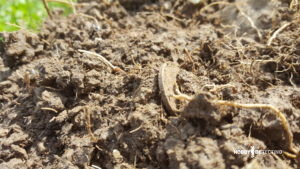 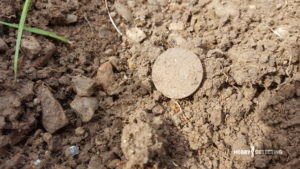 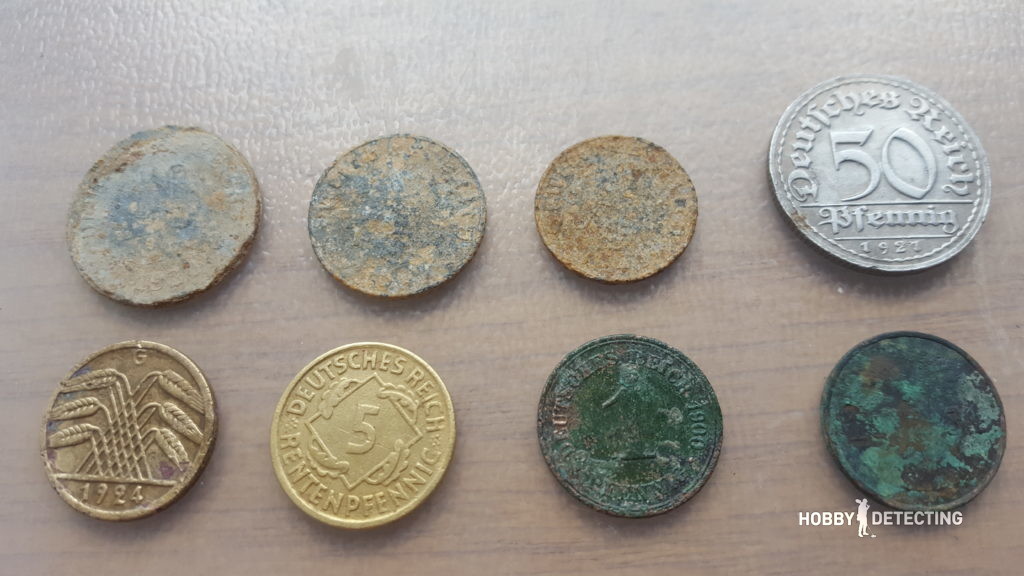 “I think we have found the old path!” I said to my friend with a smile.
Among all the coins, we also found a cross, probably a solders cross from 1866: 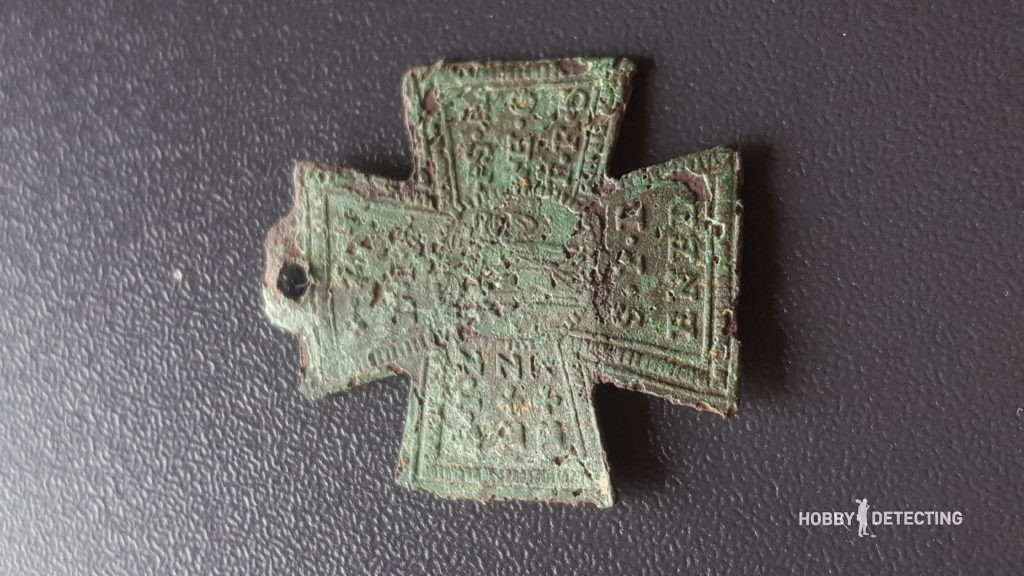 My second most favorite coin from that trip was an Austrian silver 20 “Kreuzer” from 1870 with Franz Joseph I. on: 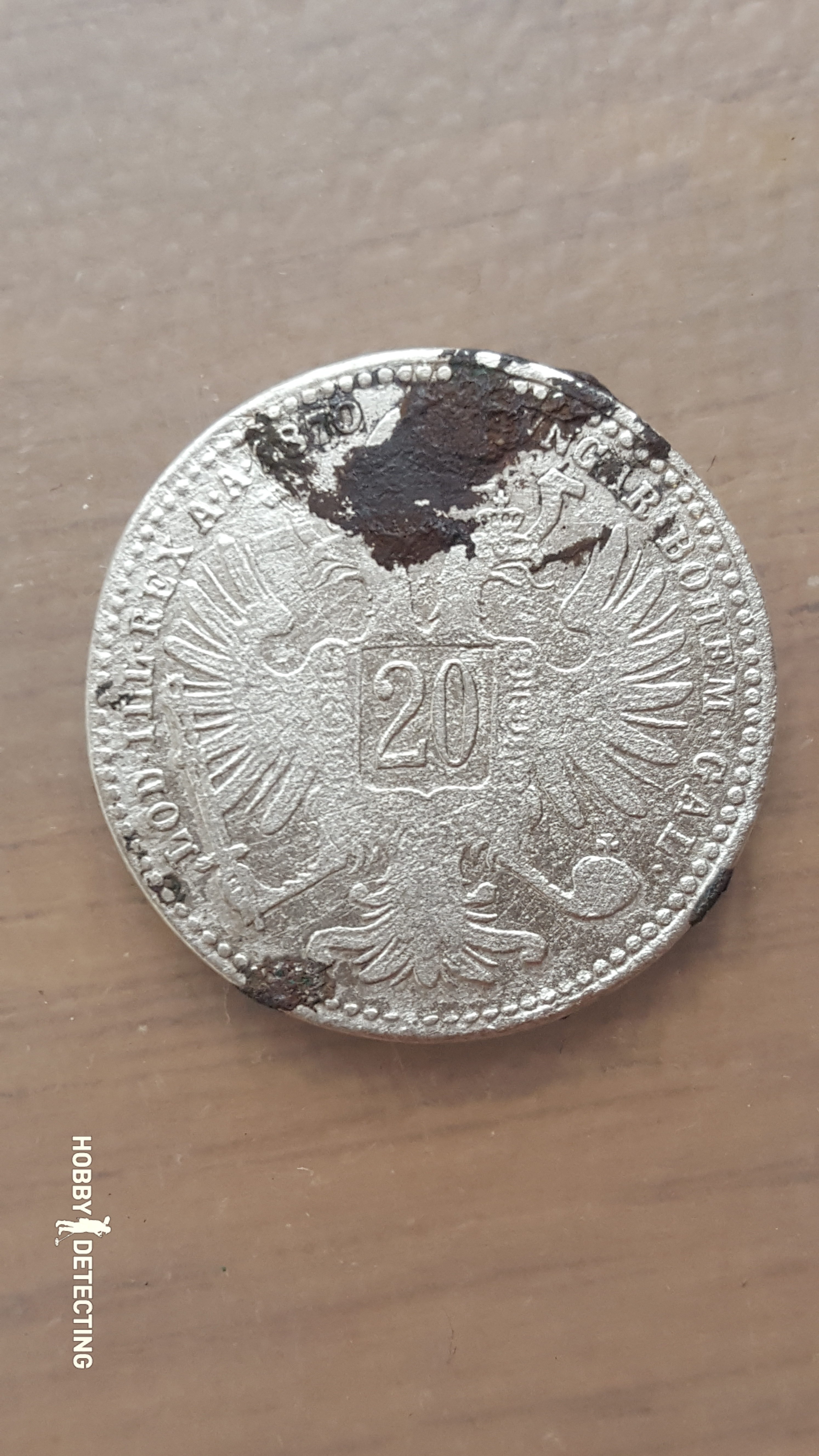 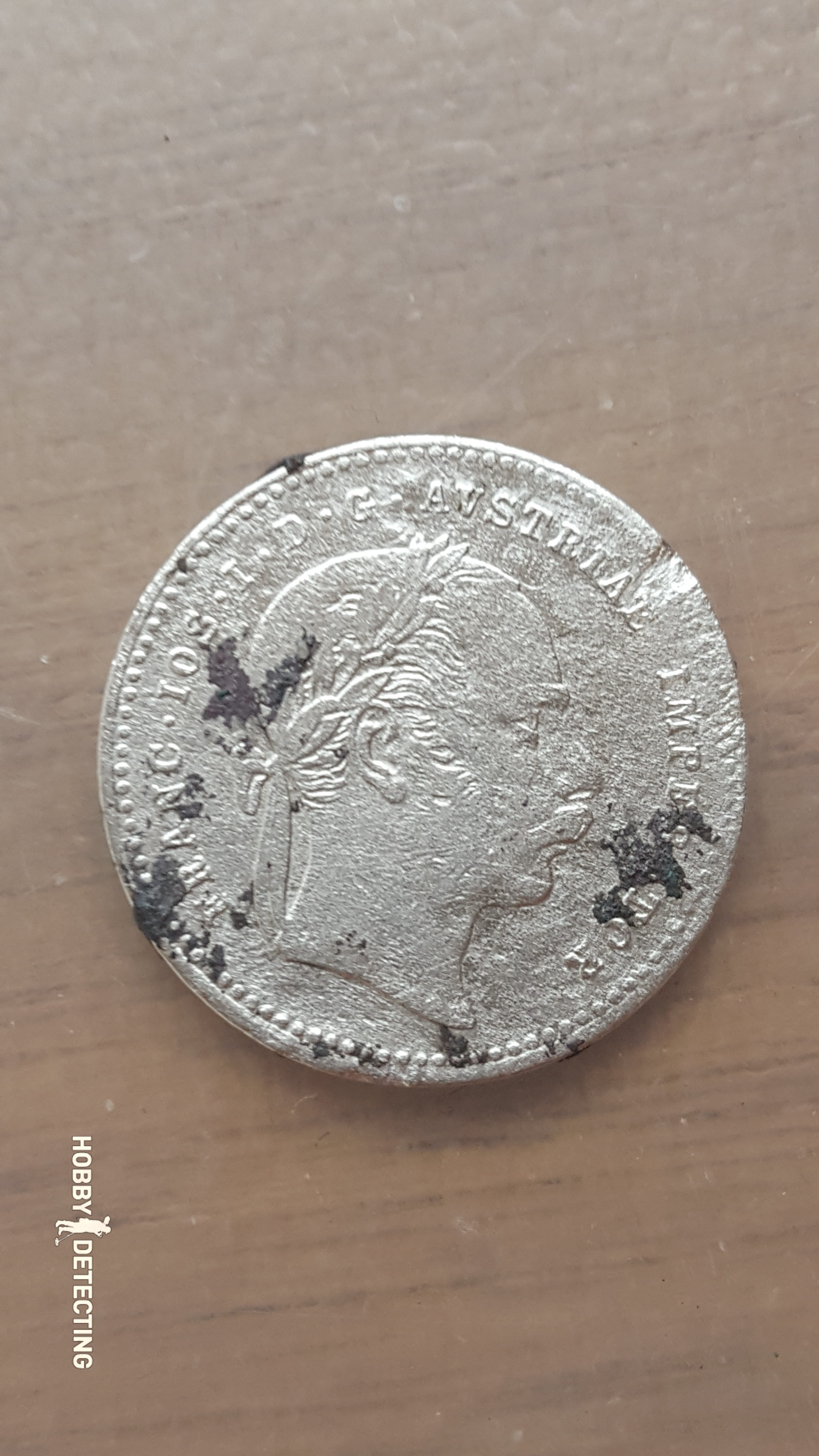 We also found some very cool buttons and badges, like an old silver plated button, a farmer’s button, and a “Fernverkehr” badge from Hitler’s WHW from the 1930s: 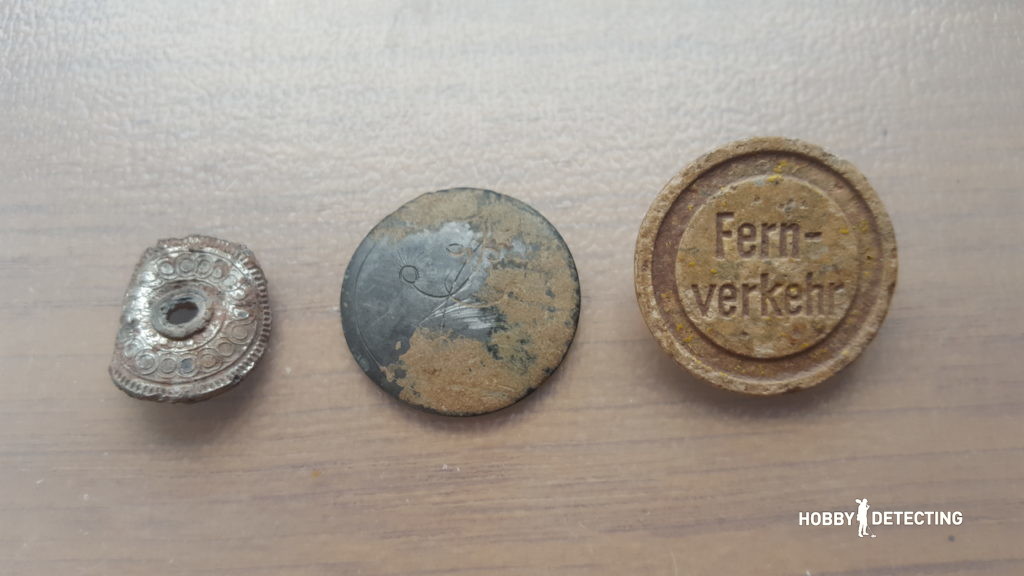 Suddenly, almost at the very end of that day, we got a high tone on the ACE 150. “Probably some old can or another piece of trash, like most of the other high tone signals”, I said to my friend. We started digging, and when my friend lifted up the dirt, I saw something shiny. “What is that?” My friend asked. “Another cork?”. “No” I said, “it is an old silver coin”. 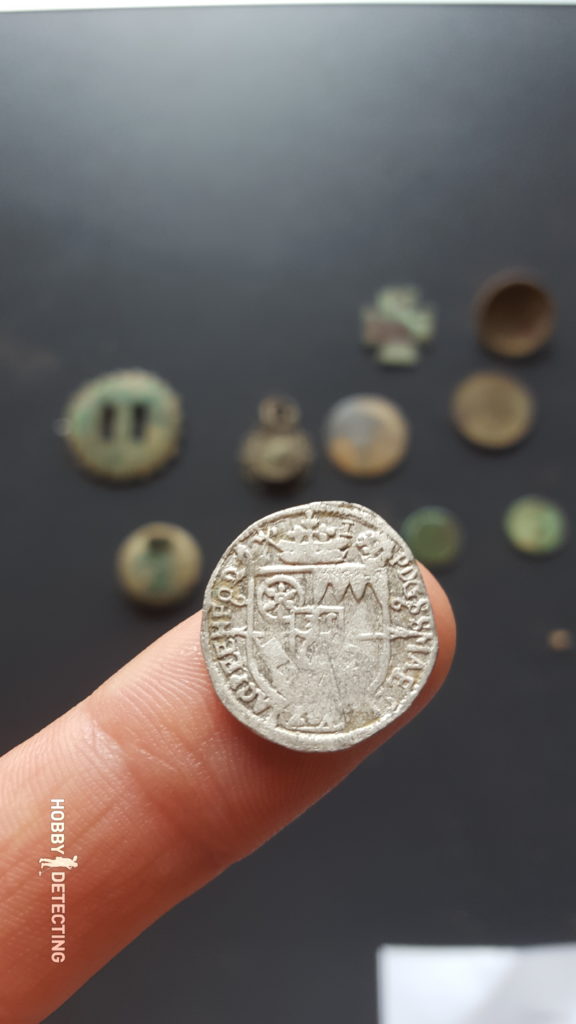 We couldn’t believe what we hand found with the ACE 150; A Würzburger silver schilling from 1664! 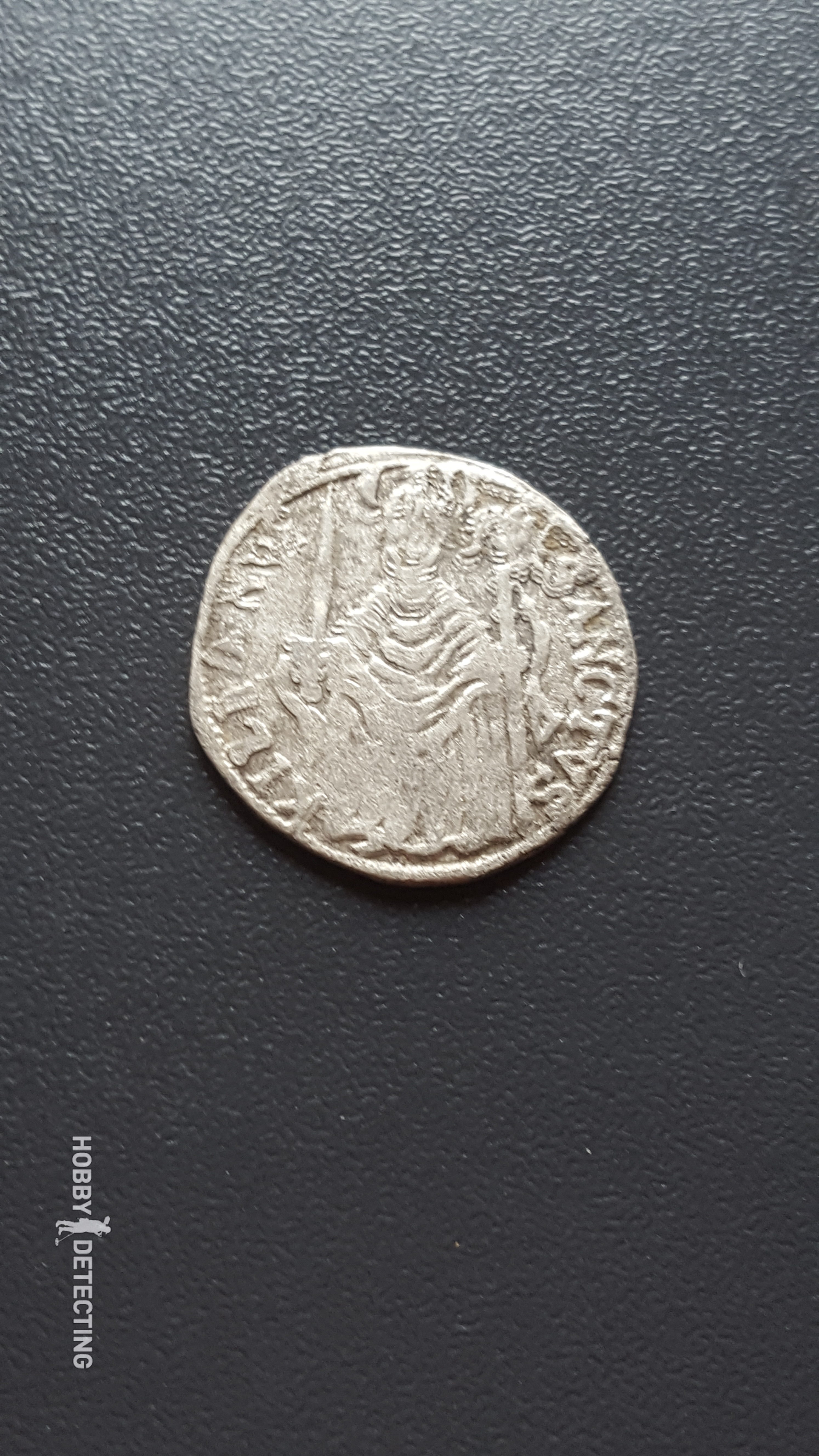 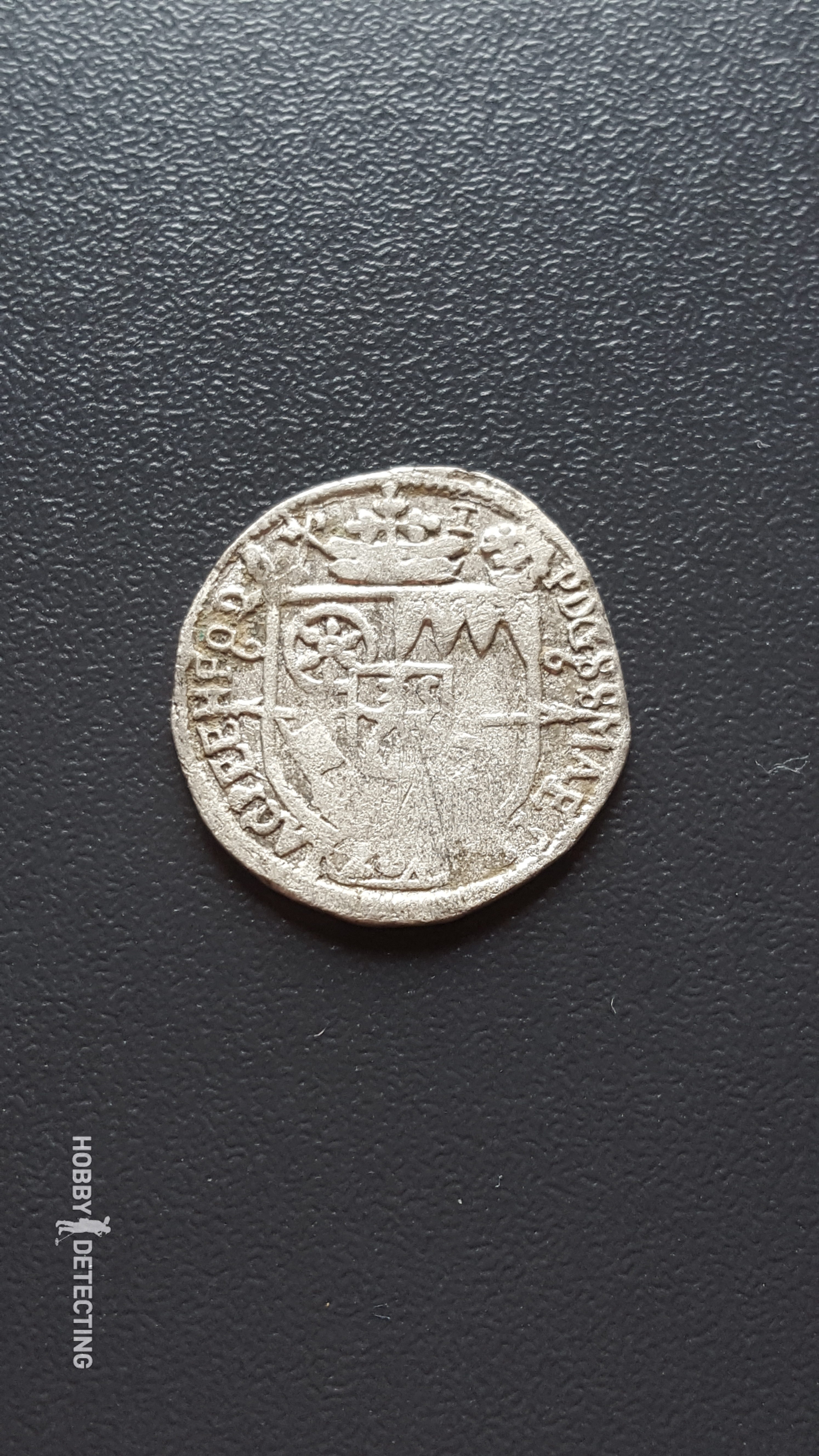 Now that is a stunning find with the ACE 150!

Do you have, or have you owned the ACE 150? If so, what is your best find with it? Tell us in the comments below!