Transferring Finds To The Museums, How Does This Happen? (Info, Interesting!)

Since the topic is quite relevant, it was decided to write a separate post on this issue. It should immediately be noted that I do not agitate anyone to hand over their finds to museums. I will only describe the process of transferring the objects.

Annually on October 7th, in some museums, there is a special holiday – the Day of the donor. A donor is a person who donates objects of historical and cultural value to the museum for free. The donor is an unofficial colleague of a museum worker who, without being a museum specialist, replenishes museum funds. Thanks to donors, the history of the regions are collected bit by bit. The names of donors who have made a great personal contribution to the preservation of the cultural heritage of the regions are even sometimes recorded in special Honor Books of museums. 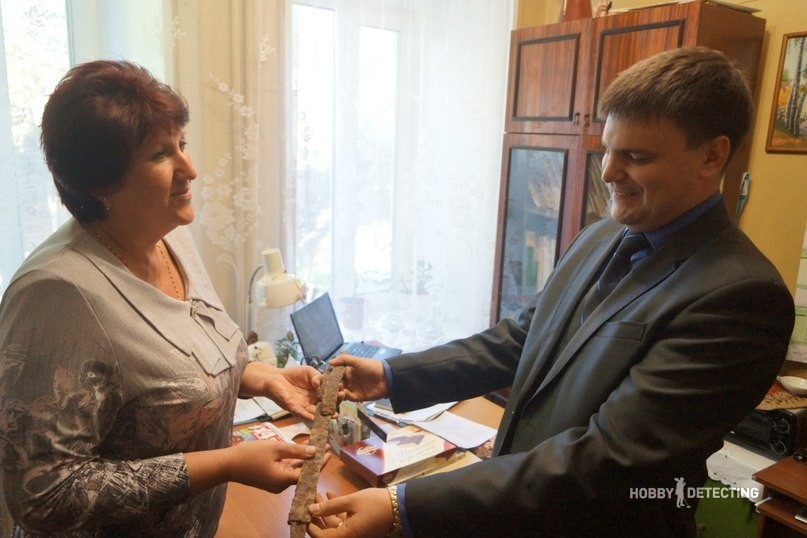 The photo captures the moment as the head of a historical club hands over an ancient Russian saber of the 12th century to a Historical and Archaeological Museum. Some detectorists who consider themselves patriots of their native land and want to donate a few expensive and not very old things to the museum on a free basis, justly want to make sure that the items they transferred will then be in the museum’s expositions, not in the pockets of museum workers or from private collectors. In general, they want a document confirming the transfer of items to the museum. According to the generally accepted rules, the transfer by generous diggers to the museum takes place according to the act of acceptance and transfer with a list of subjects (you can photograph and attach photos of the transferred items in advance), where it is indicated that the items are donated on a gratuitous basis. The act is made in 2 copies, signed by persons who accepted and handed over the items, approved by the director and sealed with the stamp of the museum. Or with the involvement of the press, to underline the fact of the transfer of the object to the museum. But in practice, many museums for some reason, do not readily take historical items into their funds, especially when they require a document confirming the transfer of these items. Many museums are afraid to take items from private hands, including from treasure hunters, for the following reasons: – Firstly, this is unnecessary paperwork – Secondly, many do not even know how this is documented. For example, in 2014 in a local museum, a man brought a bucket of interesting finds. Many museums only dream about such exhibits, but no in this museum. Instead of gratitude, he got the quite opposite. As a result, after a call from the Ministry of Culture, the workers of the museum took the objects, and then for a long time could not understand what to do with them. You can transfer the finds to the museum in the presence of the media to officially record this fact, as one of my fellow detectorists did when, in 2014, he decided to present an ancient Russian sword of the 12th-13th centuries to the Spassky Historical and Archaeological Museum, where he took this saber with joy.

But under similar circumstances (only without journalists) honest people brought a museum a real and not badly preserved sword of distant tsar times. But the museum workers directly from the manager sent them to hell, referring to the fact that this was a cold weapon and that they did not need it. As a positive example, I will bring the Shilovsky Museum of Local History, where the transfer of values to the museum is formalized as a donation. First, the object is taken for temporary storage, then the commission determines which category this priceless artifact of antiquity will go to, after which the contract is concluded for the permanent storage of this thing. This museum’s exposition is really impressive, especially the collection of ancient Russian weapons. In general, I really like to visit this museum, in this regard, I advise everyone to visit it! In general, it is better to see it once than to hear about it a hundred times! As for the Spassky Historical and Archaeological Museum, then the director of this museum is fully versed in her specialty person. She actually takes the antiques to the museum. I talked to her about the fact that many detectorists would like to transfer interesting things to the Spassky Museum, but are afraid for their safety and are afraid that problems may arise. She guaranteed complete confidentiality and said that she would gladly take antiques to the museum as a gift. Accordingly, the natural question arises of how to make sure that when you transfer your antiquities to the Spassky Museum that they get to the right place. The answer: we must do everything officially, with the papers. On the other hand, if you do everything officially with papers, your personal data will be shown, which most of the detectorists do not want.

But there is one problem if you want to do everything officially. Before you hand over your finds to the Spassky Museum, you will have to prepare in advance the certificates of acceptance and transfer with a list of items and enclosed photos of the items to be transferred, which must be made in duplicate, signed by the persons who accepted and handed over the items, and later sealed by the stamp of the museum. By the way, the exposition in the Spassky Museum on the pre-Mongolian is very, very scarce, there are practically no old Russian weapons either. In general, everything is sad. Oh yeah, I almost forgot about the main museum of this region. So, according to the information that I had, some faithful amateurs of detecting brought some very interesting antiques to the Ryazan Historical and Architectural Museum and wanted to transfer them there on a no-cost basis. At first, everything was good, the guys met and said that they would gladly take these items. However, after they heard about the act of acceptance, for some reason they began to call them black diggers, plunderers of archaeological monuments and threaten with problems with the law, the police, etc. Accordingly, after this case, these detectorists had no longer any desire to continue to hand over their finds to the main museum of the Ryazan region!

Unfortunately, theft from museums is not uncommon. According to the results of the audit of the Accounting Chamber, published in 2001, 220,000 exhibits were lost. Often there was no insurance documentation and documents proving authenticity.

Independent experts from the FSB have established that “black archaeologists” actually provide only 1% of criminal proceeds to the antiquarian market of Russia. The rest is given by museum workers, legal archaeologists, ordinary thieves, and smugglers.

And this despite the fact that in Russia, journalists now call absolutely all people who have metal detectors “black archaeologists”.

But, for example, in Estonia, the reward for a find is paid in the amount of 100% of the estimated value. Not 50%, or some other ratio, namely 100%. And all to the one who found it. The appraisal commission determines the estimated cost. The amount of compensation depends not only on the material value of the find itself but also on the complex of corrective actions when it is found. It is thanks to this that many finds that used to go to the black market are now in the hands of the state. Clear and transparent scheme of transferring of the finds has increased the number of detectorists, ready to interact legally with the state!

How is this practiced in your country? I will be happy to read it in the comments!