I recently went to Germany for the purpose of visiting my friend Marco and decided to bring my detector with me, just in case we had some spare time for detecting. And luckily it turned out that we had, and that brought us some really cool finds and an unforgettable experience! So, let’s get to the story itself:

I decided to bring with me my XP Deus detector, as I had just recently acquired it. And as I knew that Marco had a Garrett Ace detector, I got a brilliant idea: So as not to drag with me the whole XP Deus, I decided just to take with me the coil, the control panel, and the headphones. “But why so?” you may ask. Well, you know the saying “a picture is worth a thousand words”, so I will just show you the answer:

“The Garrett Deus”, as one German fellow detectorist described it. I don’t know how you think it looks, but I will tell you that it works just like a normal XP Deus.?

On the first day that I and Marco had time to go detecting, we went to a field nearby, where we have had some good finds earlier. (Read this story here!) 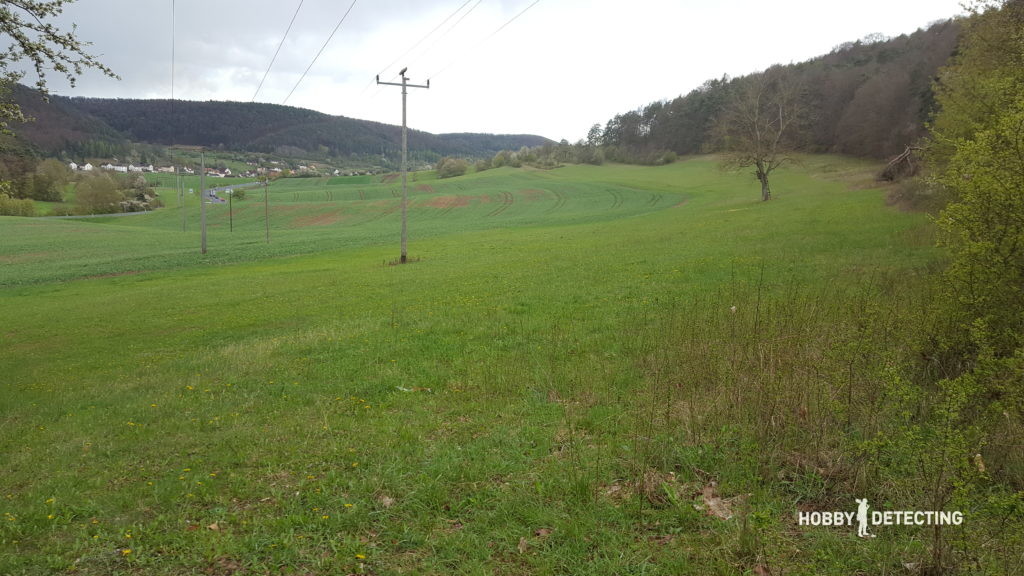 We began detecting, and the “Garrett Deus” showed us that it worked without flaw. In this field where we were detected, there was some activity during the 1866 Austro-Prussian War, and to understand our finds I will quickly put you through the basic history of this war:

The Austro-Prussian War (or the German Unification War) was a war fought in 1866 between two sides: The Austrian Empire and its German allies on one side, and Prussia with its German allies on the other side. Many of the German states sided with Austria, like for example the kingdom of Bavaria and Saxony. However, this war resulted in a Prussian victory.

And because this field is located in Bavaria, it brought us relics from both sides of this conflict, as well as from other time periods.

The most common “good” finds in this field were lead bullets. Most of them were from the Dreyse needle-gun (Zündnadelgewehr), which was used by the Prussian side in this conflict. 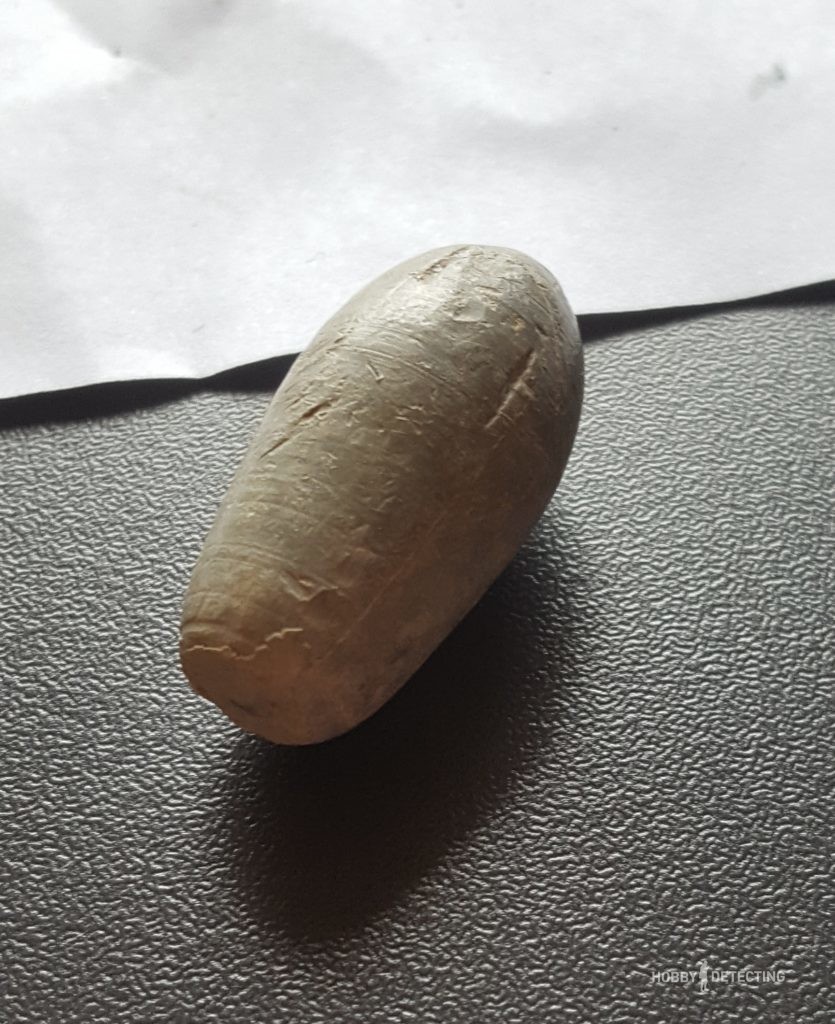 Different other lead bullets used by the Austrians (mostly Bavarians) were also found. 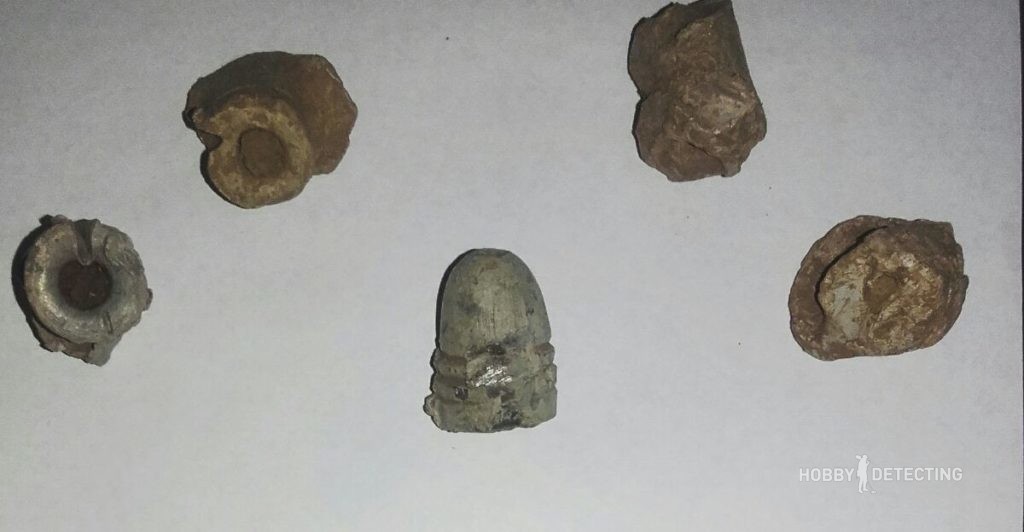 Although, there was a clear overweight of Prussian bullets on this field, something which can be explained by one fact, which also played a leading role in Prussia’s victory: The invention of the Dreyse needle-gun. This was an invention of a new gun mechanism, which used a firing needle, as the name indicates, instead of the earlier used musket system. This was very convenient, and it enabled Prussian troops to reload their weapons twice as fast as the Austrian soldiers, who were mostly equipped with musket rifles. This, of course, resulted in a big technological advantage for the Prussian side over the Austrians. This also explains the overweight of Prussian bullets found in that field. 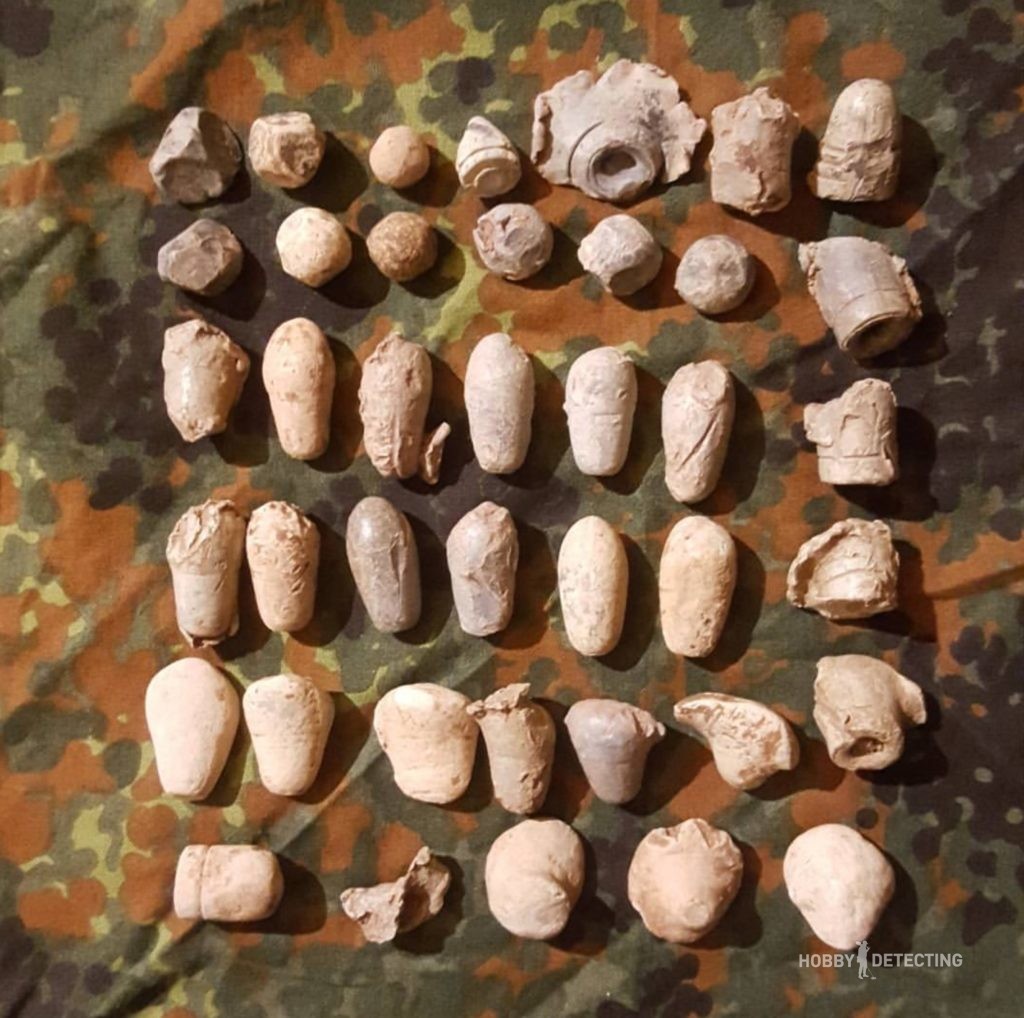 But this field did not only bring us lead bullets, but also some other good finds.

Among other things, we found a lot of buckles and buttons, most of them from the 1866 era, like this military button with the inscription “Extra Fein” and this beautiful, once seemingly gold-plated uniform buckle. 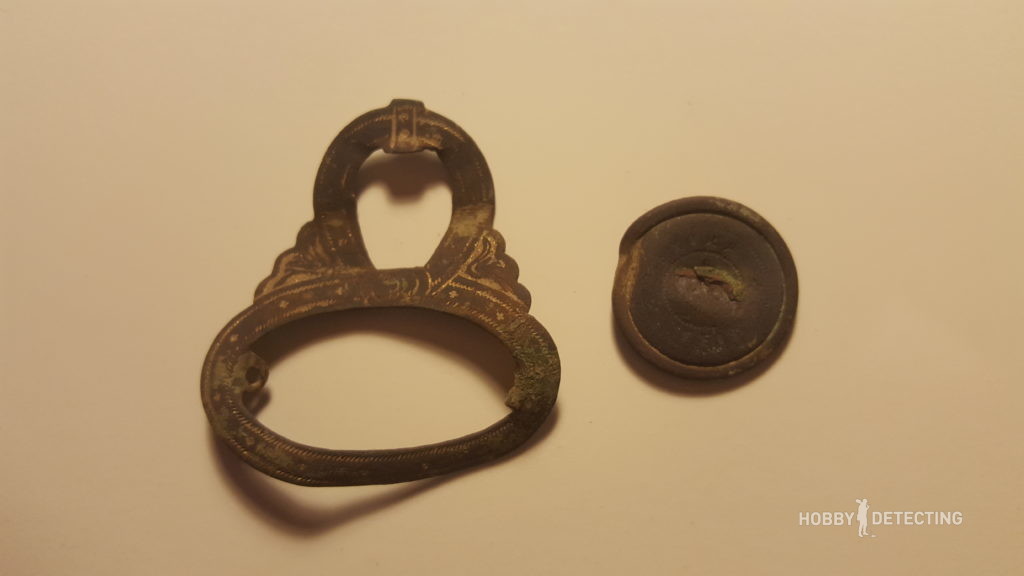 We also found a beautiful 1 Pfennig coin from 1859 with the Bavarian coat of arms on the reverse. 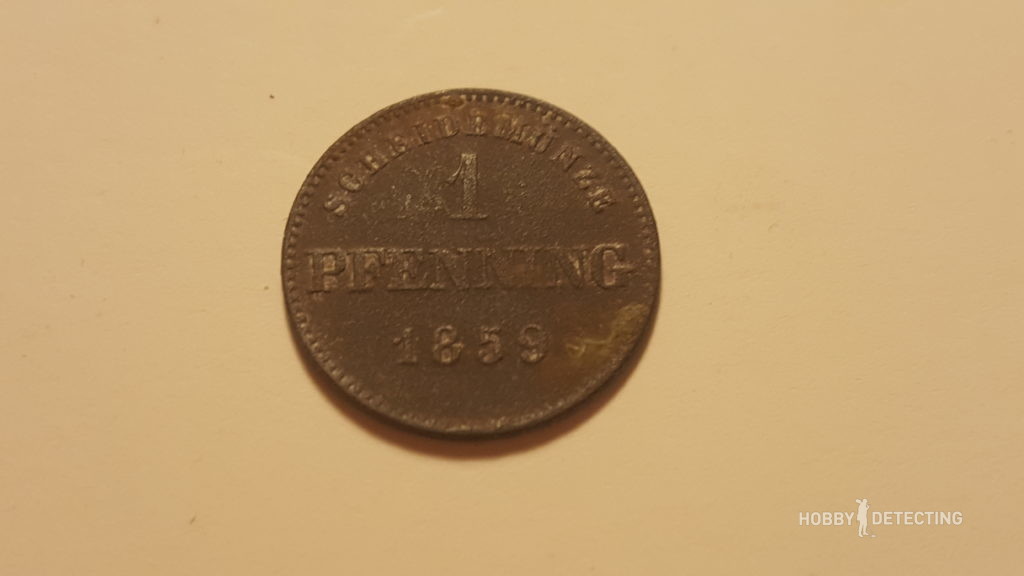 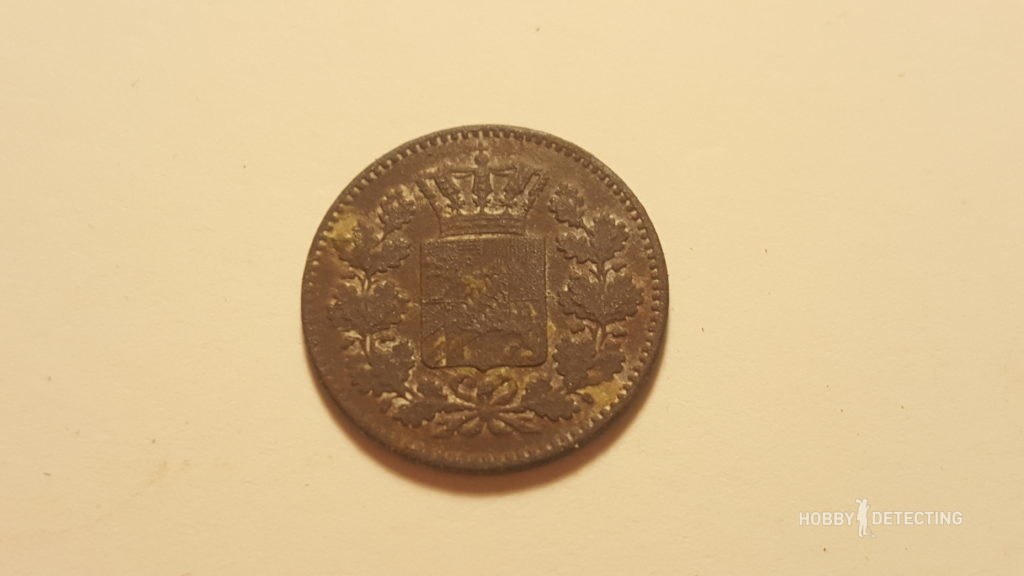 As a battle had been fought approximately on this field (not far away) in 1866 with the presence of mostly Bavarian soldiers, it is highly likely that this Bavarian coin was lost by a Bavarian soldier. One can only fantasize about who this soldier was that had lost this coin!

As I and Marco strolled further along this field, we stumbled upon a weak, but good signal. We started digging, and it turned out to be deeper than the average signal. After locating it with the pinpointer, I saw a round shape and immediately got my hopes up. I picked it up, rubbed it a little bit and looked at it. It turned out to be a silver coin! The inscription on the coin was the following: 1 Kreuzer 1864 and Herz.S.Meiningen. 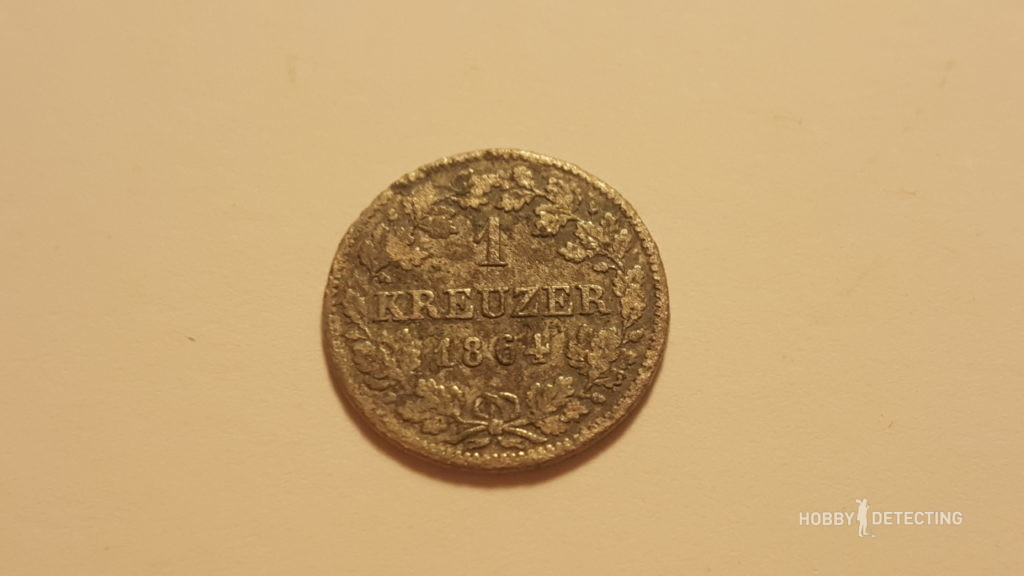 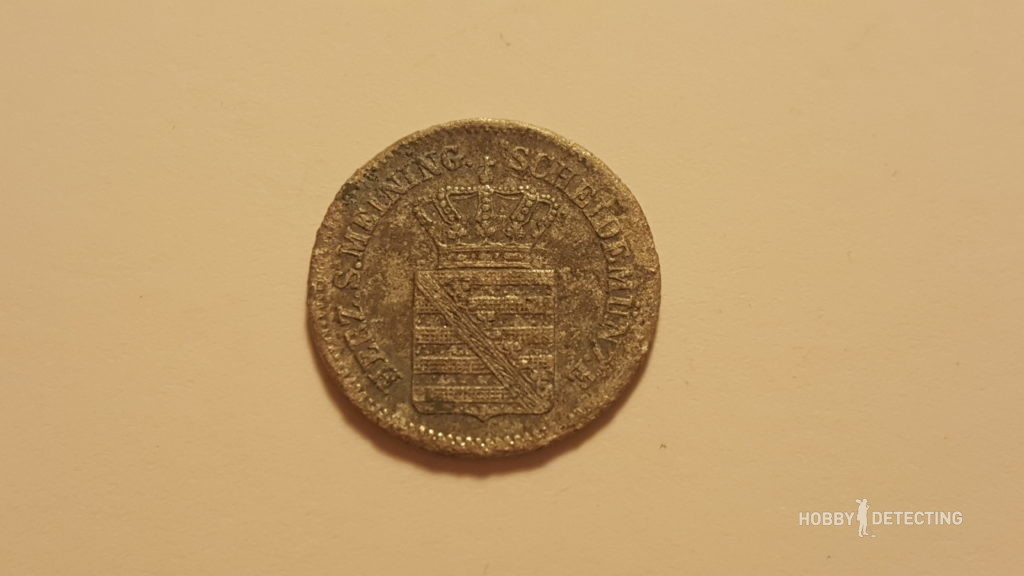 The coin turned out to be a silver 1 Kreuzer from 1864, but what was more interesting was the inscriptions on the coin. “Herz.S.Meiningen” means that this con was minted in Sachsen-Meiningen, which was one of the Saxon duchies. They participated on the Austrian side in this conflict, and since this coin was found on the 1866 field and minted only two years before the war, it is again highly likely that a soldier lost it during the battle. This can tell us that troops from the nearby Sachsen-Meiningen were present on the Austrian side together with the Bavarians, probably sent as reinforcement. As this is nowhere mentioned in the local archives, this find could rewrite the history of that particular battle!;)

Some other interesting finds from that field were two lead toy figures: 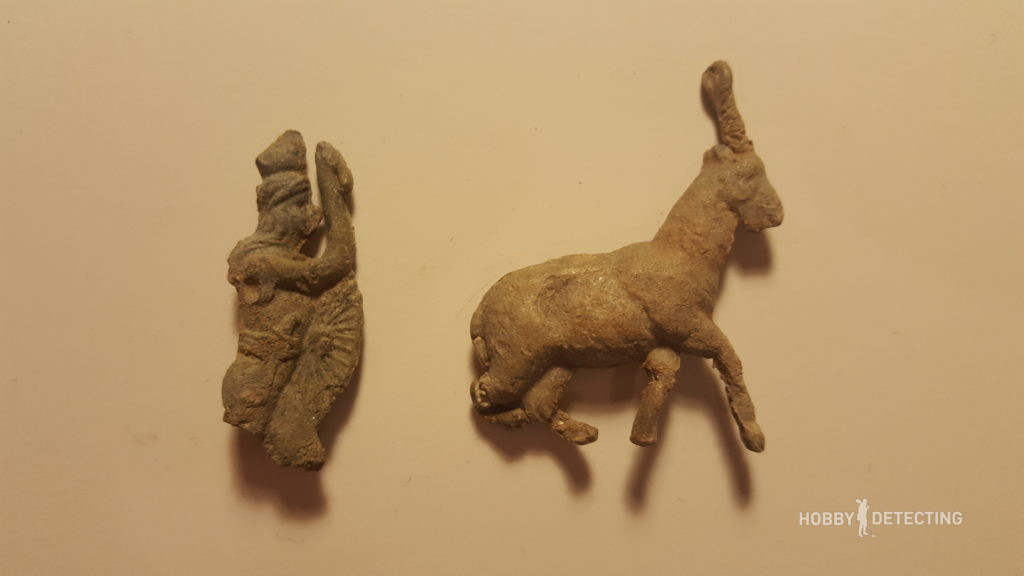 The figures are a toy goat(?) and a roman looking toy soldier. They were both found close to each other, and the estimated date on these is the 19th century.

The short detecting trip to that field turned out to be quite interesting, and the finds were pleasant. Just as we were planning on calling it for the day, a guy approached us. He presented himself as Nico, (Nico Jones from now on), and it turned out that he also was a detectorist or “Sondler” as the Germans call it. Nico Jones told us about some of his interesting finds, including a golden coin from 1888 which he had found in the woods above the very field which we were detecting! After talking some more with him, we thanked him for the nice conversation and he went on.

And then, just a few minutes later, another guy came up to us, also named Nico, asking us if we had found something. This guy also turned out to be a detectorist, and the funny thing was that Nico Jones was a friend of this Nico. So when Nico Jones went back, he notified Nico that we were out on this field detecting. So Nico came specifically to watch us detect, and we got into a really nice conversation with him.

After detecting for a while with him as a spectator, it was getting kind of cold and dark, and we decided to call it for the day. We thanked Nico for a nice conversation and told him that he was welcome to detect with us tomorrow on this field if he wanted to. He, on the other hand, invited us instead to join him and Nico Jones on their detecting trip the next day to a way more interesting place, where there had been a medieval cloister and Roman roads in the area! We thanked yes to this offer, of course, and we said goodbye to each other for the day. As we went home, the only thing left to do was to dream about our upcoming detecting trip.

Part 2 of this story will be published soon, so stay tuned!