Halberd from the 16th century found in a river (+ photos)

Just recently an article in our local newspaper caught my eye – there was found a halberd dating back to the 16th century in a river. I don’t trust journalistic tales too much- often it is just click-bait. Nevertheless, there is no smoke without fire.

So i started reading: This find was made in Estonia, in the Pärnu River, and they even mentioned the approximate place of the find – the village Karyakyula. The Halberd was found in the river with the help of search magnet. The respectable citizens who found this artifact, handed it over to officials of the Estonian National Heritage, which gave them a reward of 200 euros.

I looked up the place on a map – it’s about in the central part of Estonia.

Sama river narrows very much at this particular point. On the map of 1948, the river is marked with a depth of 1 m and a width of 15 meters, and a village was just nearby. Back in the days the river was probably deep, but who knows. An Imperial map of the place clearly indicates the presence of the same village in 1901, which stretches along the high left bank of the river. To the north and south of the village there are two bridges. So it was much activity here in the old days – people scurried back and forth. The village is old, no doubt about it, it is much likely that it was there back in the 16th century.

The article noted that the approximate dating of the halberd was the 16th century. And there sure was a lot of action there at the time! The place is located exactly halfway between the city of Pärnu, and the Vayzenshtayn  castle. The castle switched owners several times. It has been in the possession of Ivan the Terrible, it has been captured by the Swedes, and for the Poles and the Danes the castle also was a temptation. But there is no point in describing them all now, so i will just show you the find itself. 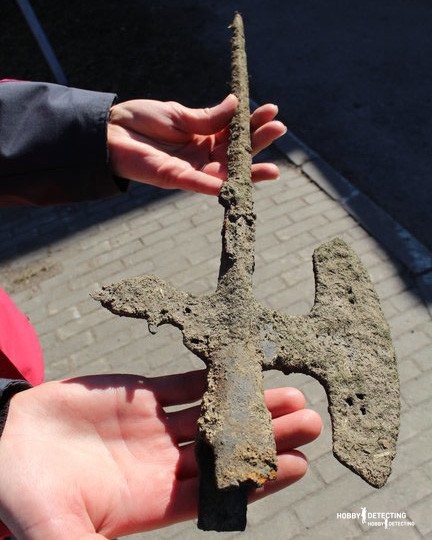