The Canals of St. Petersburg and its treasures (photos of finds+)

It has been proven multiple times that there is possible to find incredible treasures in the most sophisticated places. Moreover, the more sophisticated the place is, the more likely you are to be there first. While most of the mainstream detectorists go digging at fields and forests, some people manage to dig in the heart of the city. An example of this – looking for teasures in St. Petersburg’s canals. The work is hellish, but the result may be better than most of the mainstream detectorists’ finds.

The technology is quite simple. Just buy a large scoop, or make it yourself, it is pretty simple. Load it with soil from the canals and wash it. Rocks and debris gets thrown out, but interesting small things remain.

Here are some interesting stories about the Canals of St. Petersburg. In the 90’s at the Kalinkin Bridge, one smart guy went down into the water (the depth was knee-deep), dug the ground and washed it in his scoop, and amazingly … in just one washing he scooped up about 50 pieces of medals saying “300 years of the Romanov house.” Then off we go! For three days he scooped up over 1200 medals from different manufacturers. The find is phenomenal to say at the least! Needless to say, he traded with them for a year. But maybe you wonder, how could there be so many medals at one place? Well, here is the story: In 1917, the new Bolshevik government decided to dispose all the royal awards left by the tsar, throwing all of them in the river. Here is a photo of some of the remaining medals: 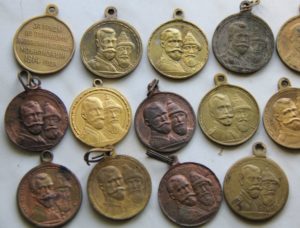 In those same 90’s , other finder threw a bucket on a stick at the bottom of a canal in front of the Stock Exchange, that on Vasilevsky Island, and pulled out a handful of coins from Catherine II. What motivated them to do this was that in that place, the coins were loaded on ships and maybe a bag or two fell into the water. And indeed! Multiple searches with buckets proved it. There has been puled out coins in greater numbers from that place, and multiple hooks from those years. They probably tried to get the bags out, but lost the hooks too. The result – a bucket full of coins.

And when the cold weather hit, the ice hit too. People started making holes in the ice in some places, and tried the scooping technique. One time a handful of old Komsomol badges were found. 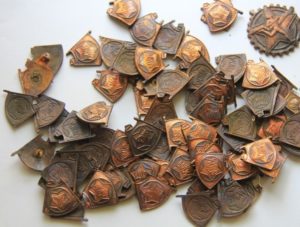 During repairs in a lock, it was drained. And workers discovered that on the bottom of the lock, there were a lot of coins. There was a tradition of throwing coins from the ship when passing locks, and this explains the findings.

Meanwhile, some workers discovered something interesting: Sewage pipes in the city had collected several thousands of coins, many of which were from the Empire, photo attached below. 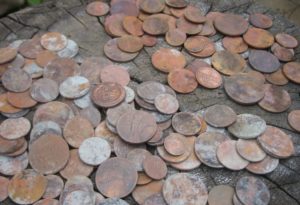 The following findings are all made in Catherinehof. This is a collection of seals, the earliest from 1750. Since the time of Peter, there used to be warehouses there. 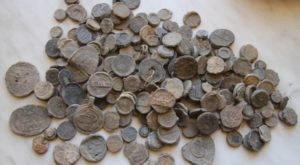 This all happened some time ago. Now some fresh news from October 2016.

The water level in one canal were lowered so much that the dirt started sliding down, and the old cultural layer started showing through. And because of this there was found three kilos of copper coins from the mid-19th century to the Revolution. Not finding of the century of course, but still nice! Photos attached below: 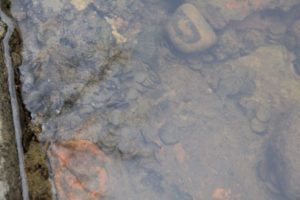 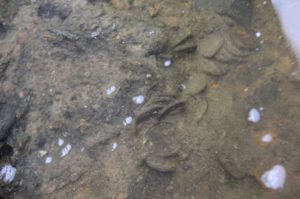 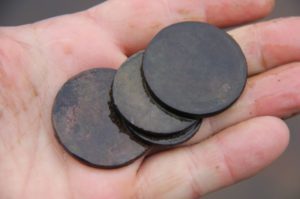 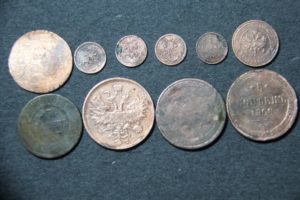 Those were some nice finds! Want to read more about interesting finds? Click here!