Maybe you thought that the coins were always round? No, there are coins from different countries of all sorts and different shapes. Take, for example, the clip coins of the Swedish Empire – large squares and rectangles of copper, which can sometimes be found with a metal detector, but something that far from everybody knew: there were also Russian square coins!

It turns out that in the Russian Empire, square coins were minted in the time of Emperor Peter I at the end of the Great Northern War. Peter tried to limit the production of counterfeit coins and one of the counter forms of counterfeiters was the introduction of square coins. They got this idea from the defeated Swedish empire. It is known that in 1724, Vasily Tatishchev, a prominent politician and an expert on mining went on a business trip to Sweden to get acquainted with the technology. The idea was simple: to replace all copper coins by square-shaped coins at a value of 10 roubles, so that the value of the coin was determined by the value of the copper. They started to mint coins first after Peter’s death in 1725, all coins from a rouble to a “hryvnia”. 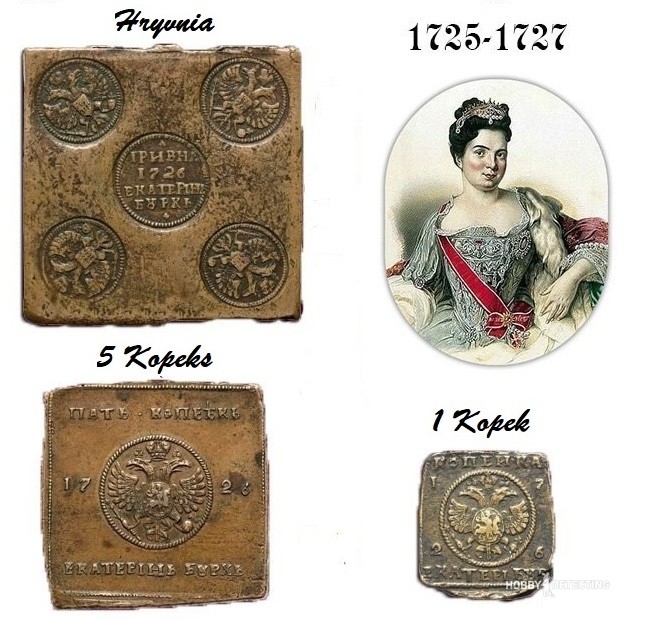 The main circulation of coins began in the year 1726. The most common coin was a “hryvnia”.

It is reasonable to assume that such squares were difficult to use and pay with, and therefore already in 1727, the minting of such coins was terminated, and the squares were gradually withdrawn from circulation, which led to their great rarity today! Such coins are expensive, and fakes are not rare!

Good luck detecting, and I wish you all such rare finds!