One of the best ww2 finds is unquestionably the German helmet. Of course, depending on the decals and its condition. The sample in the photo above is indisputable from the category of amazing ones only because of the SS decal on the right side.

Expert on this subject can argue long about the inexhaustible number of variants, decals, etc., taking up another heap and samples during the First World War. However, in the former Soviet-German front in 1941-1945, mostly you will find the three most common steel helmets of the German troops – the models 1935, 1940 and 1942. Often they are referred to as M35, M40 and M42.

The major visual differences are not so big. In terms of total war it was mostly about to simplify the production, which affected the helmets designs. The Model 1935 differs from the model 1940 by the vent. The M35 has the vent stamped into the helmet, where the M40 has the vent as a seperate piece. The M42 differs from the M40 by haviing a more “sharp” edge. Just visually compare the photo. The Helmets are presented in chronological order, from left to right. 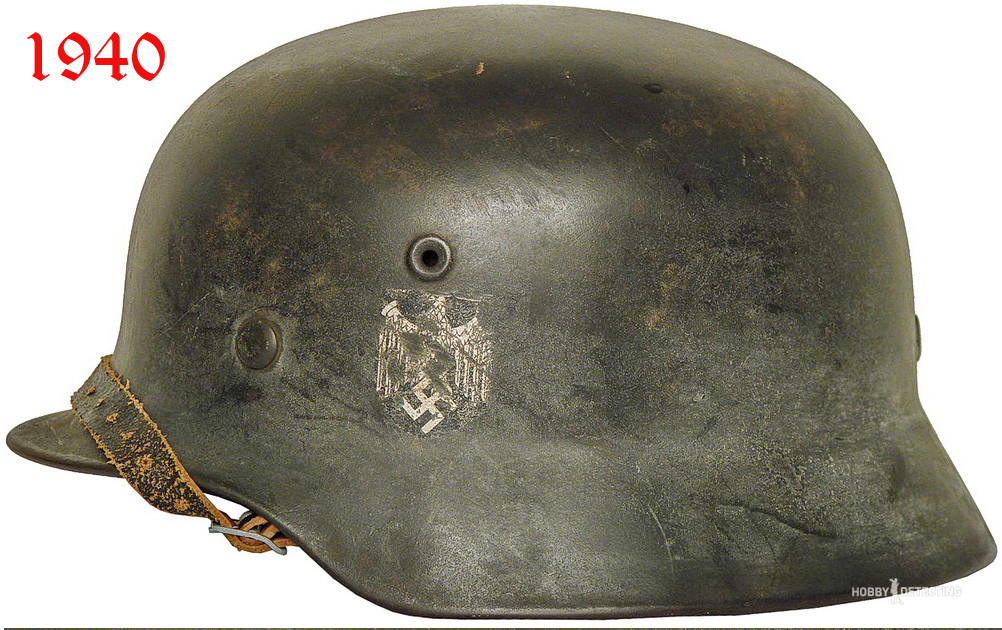 Helemets in such a good condition can only be found in antique stores and in private collections of the rich collectors, because they cost several thousand dollars a helmet. To find this in the attic, and even more so in the ground is almost impossible. Like many artifacts of the Second World War, they are made of iron, they are quite common, but the condition can bring tears! Just like in this photo.

Even so they are collected and put up for auction. I usually drop a tear on them and hang them on a nearby tree 😉

If i found a rusty iron helmet in an okay condition with no cracks, it can be restored and set up on the shelf, where it will take its place. In three words, the technology is simple: polish the metal, prime and paint. That’s the theory, in fact it is a little more complicated. You will need a leather liner, strap and fasteners (clasps) which can be ordered on the internet. This is much to do, but the item will be returned in an almost pristine condition.