Black Ada Gladius – A Review Of An Excellent Shovel For Detecting! (Review, Photos+)

For a long time, I have been wanting to write about this shovel, but I have waited for the shovel to break. But it has not broken down for a full season, and it is still going well! Because after a whole year, nothing has yet happened to the shovel. But let’s take care of everything in order! 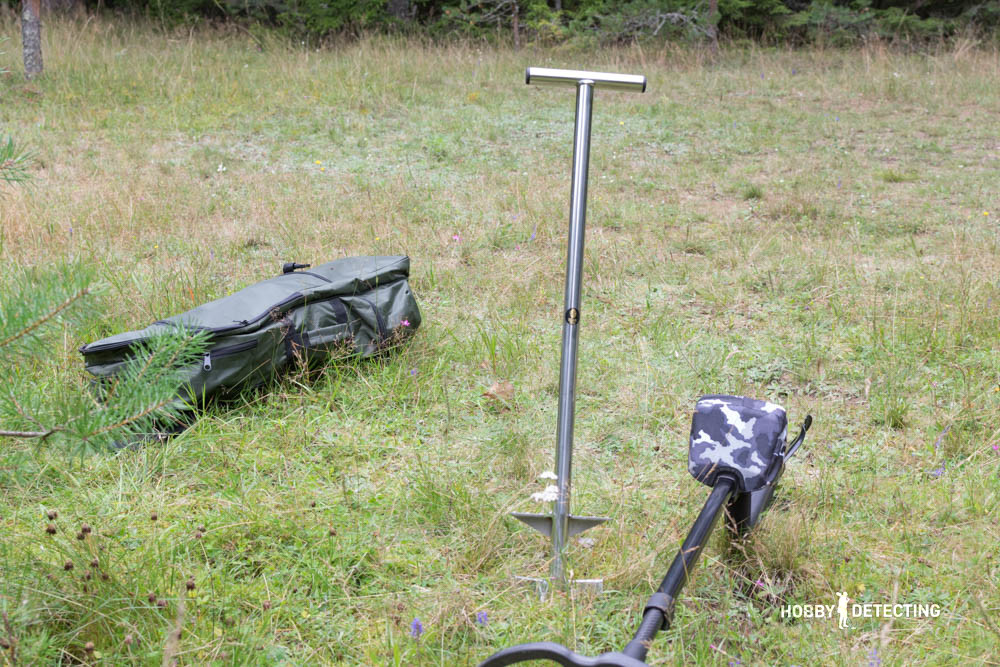 I watched one video on Youtube, and there was this one British digger that praised his shovel very much. I watched it and thought: “Is there anything that can be better than the usual shovel from Fiskars?”. Fortunately, curiosity won and I went on the Internet, it turned out that the site of our local store of metal detectors had a whole line of Black Ada products. I looked further and found that this company and their shovels were from the UK, with their own design and development there. It is so that the diggers themselves made shovels for detecting. Well, I read all the reviews, I looked at their site and ordered.

I told my friends about it, and they said: “Are you kidding, what can be better than the usual Fiskars?”. But curiosity took its own, so I waited for my two packages to arrive – yes, I took two shovels; the Gladius, for detecting in the fields/forests, and the BigFoot model shovel – which is a smaller shovel for lighter detecting purposes. Now I’ll tell you about the Gladius because with the Gladius I have detected the most.

When the Gladius finally arrived and I finally picked it up, I realized why this shovel is so popular in the UK. Everything is very simple – the balance, the size, the convenience and the footrest. It is clear that everything was designed by diggers and for diggers. 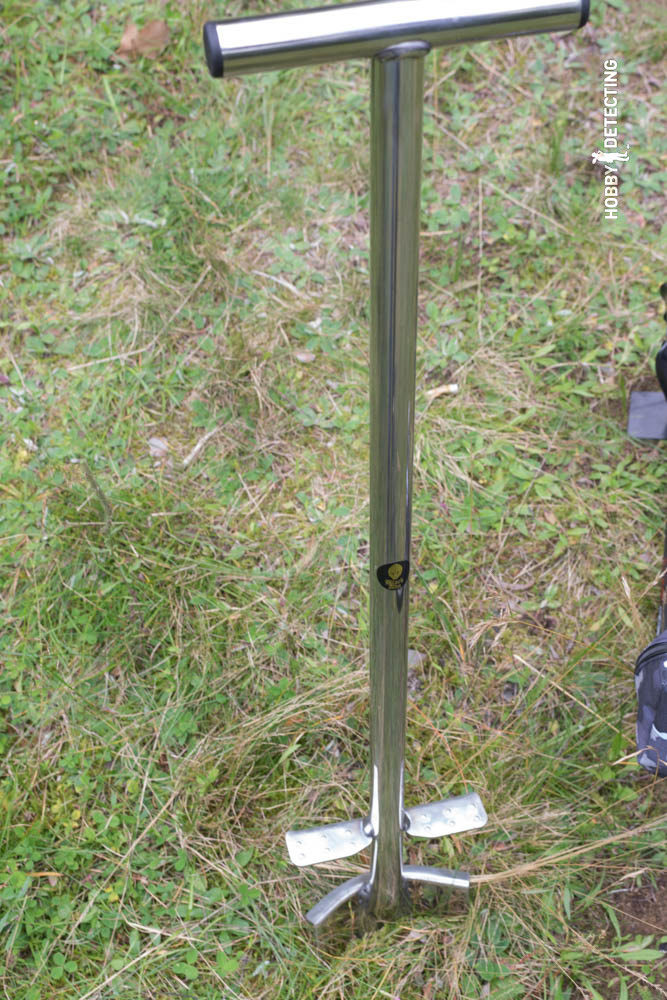 The height of it is a meter and 13 cm, but despite this, the shovel is compact and convenient. Compact in the sense that it does not look and does not feel as massive as my usual long Fischer shovel. The material of the Gladius is steel, and so polished and pure steel that after a dozen detecting trips, the shovel does not look worse, everything still shines. I do not know if this is good or bad! 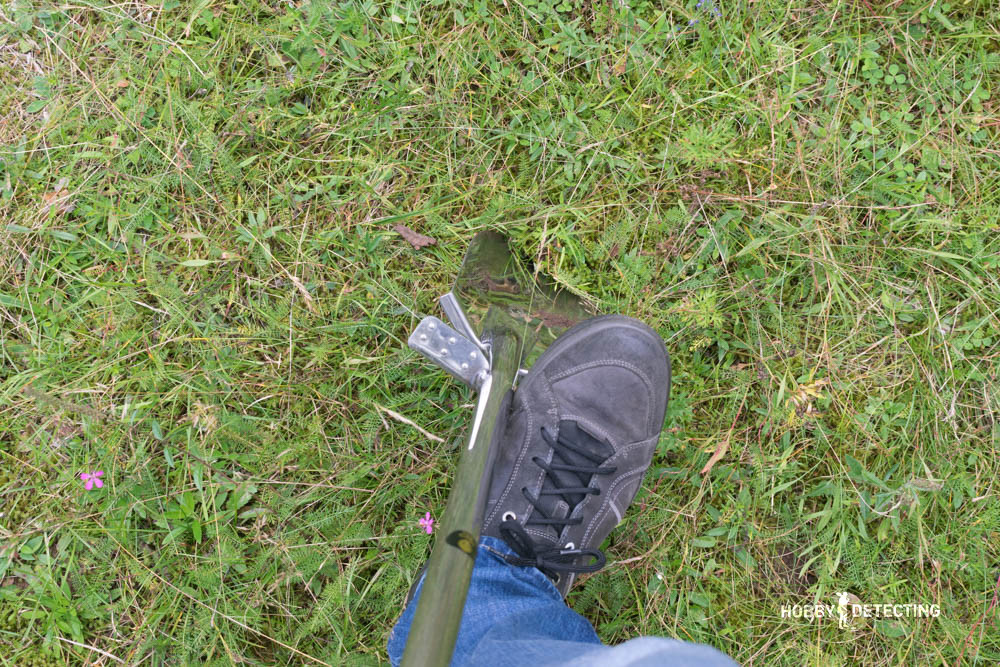 The footrest is very convenient to use. It is clear that the shovel is for detecting coins and small relics, but I have dug war relics with it too, even though it is not its job, to be honest. The shovel is perfectly sharpened to the task of digging, it makes an even square plug when digging and it is easy finding the coin with a pinpointer. 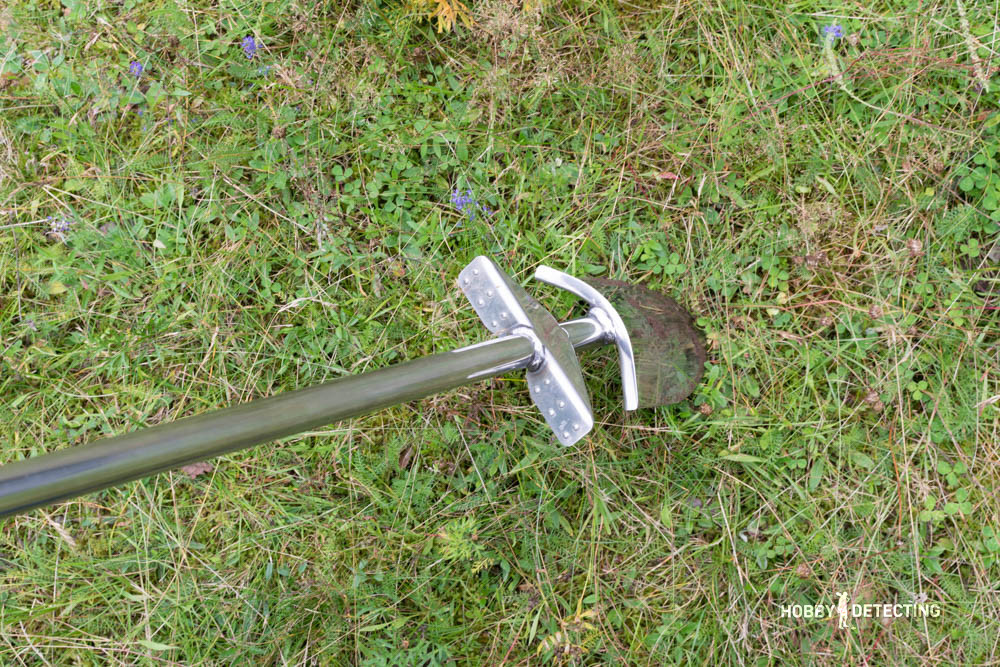 In addition, the leg supports have protrusions, so that the leg does not accidentally slip. Has this happened to you? It has happened to me, but not with the Gladius. 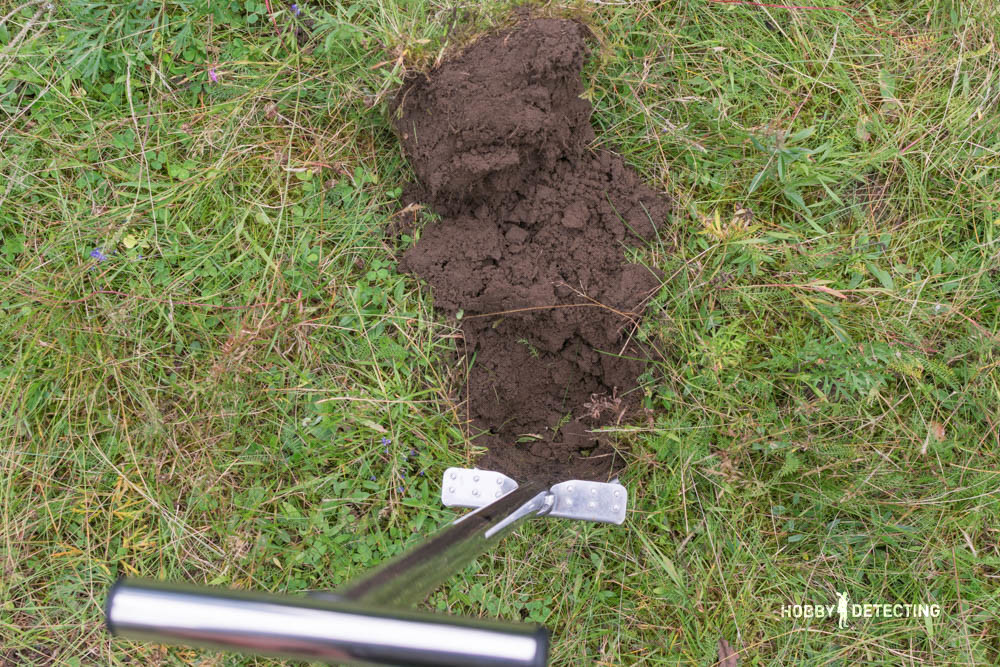 The squares it leaves are perfect. On the blade, there are specially sharpened grooves that make it easy to cut the turf, and this is very important for detecting.

The weight of the shovel is 1700 grams, but due to the fact that it is perfectly balanced – its weight is almost not felt at all. It is easy to carry it by hand, and the upper handle comfortably lies in the hands even in gloves. Once again it can be seen that this shovel was made by diggers and for diggers! 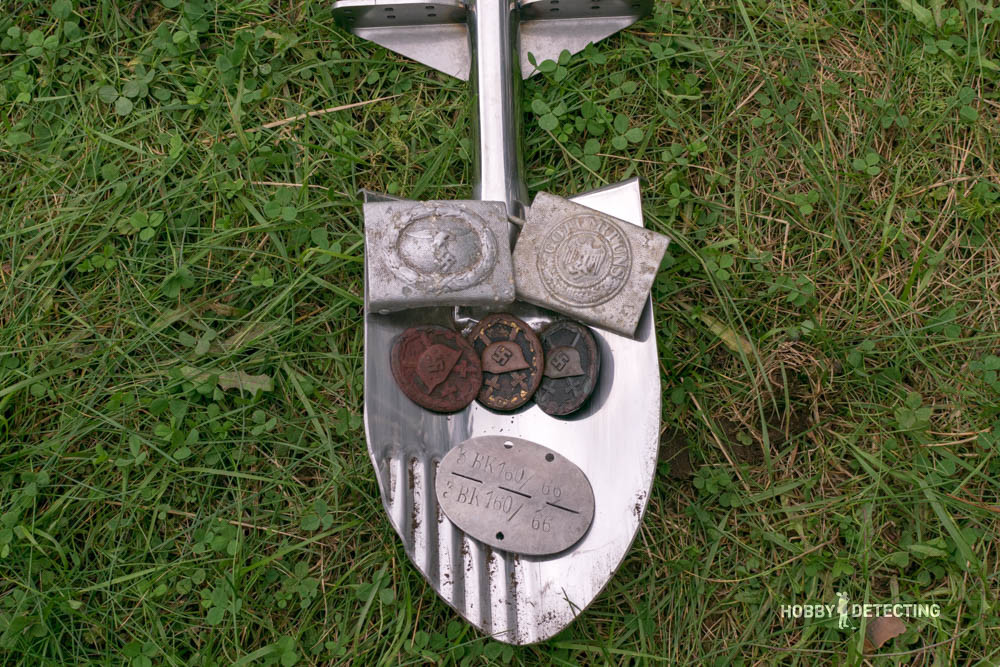 Is it hard to find a shovel full of finds with the Gladius? It’s easy! With even longer walks in the fields with a metal detector in one hand and a shovel in the other, my detecting has become much easier and more effective. I stopped getting tired so quickly, because even a short Fiskars shovel had a much heavier feeling than the Black ADA Gladius.

I also wish all of you less tired hands during detecting, good luck!