Have you ever dreamed about digging WW2, but have never had the opportunity to do so? Well I have, and my dream became reality. I live in a place where there never were any battles or much of action, so I do not have the opportunity to dig much WW2 relics where I live, but I have always been wanting to do so. And one day, one of my friends invited me over to him, so that we, together with a few other detectorists, could dig WW2, more exact the year 1944. The battleground where we detected is located in a place far from any civilization, and there is not much activity the today, ordinary people simply have nothing to do there, mushrooms can be collected in a more peaceful and safe environment.

My friend who invited me, was the one who found the place where we would detect. He found the place by looking through a map from 1948, to see where there were dugouts on it. He found one interesting point with the coordinates 32.7, where the German troops were, which meant that there had to be a battle there once. 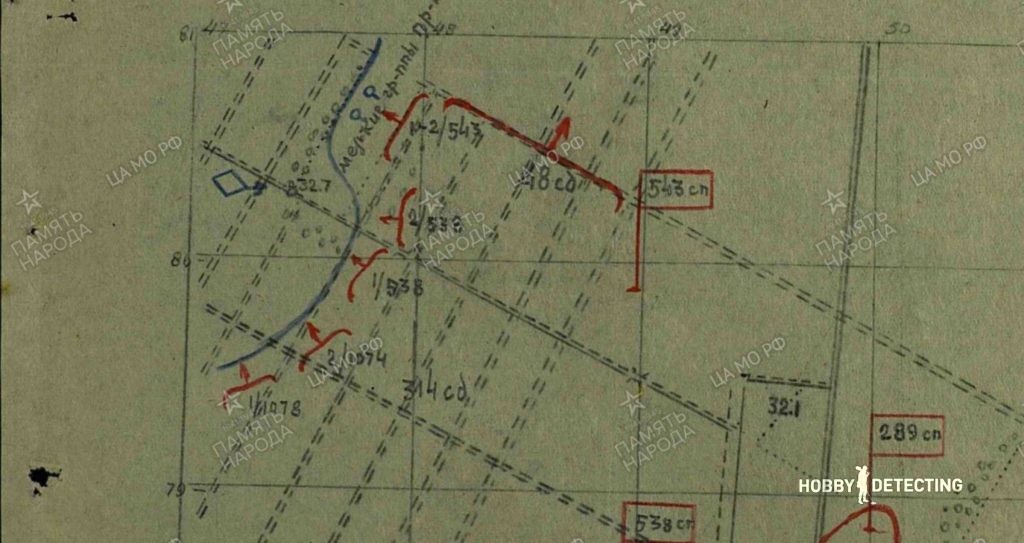 He went on to find the log of the unit fighting there. It can be seen that the Soviet troops attacked the German positions, so there also had to be something after that: 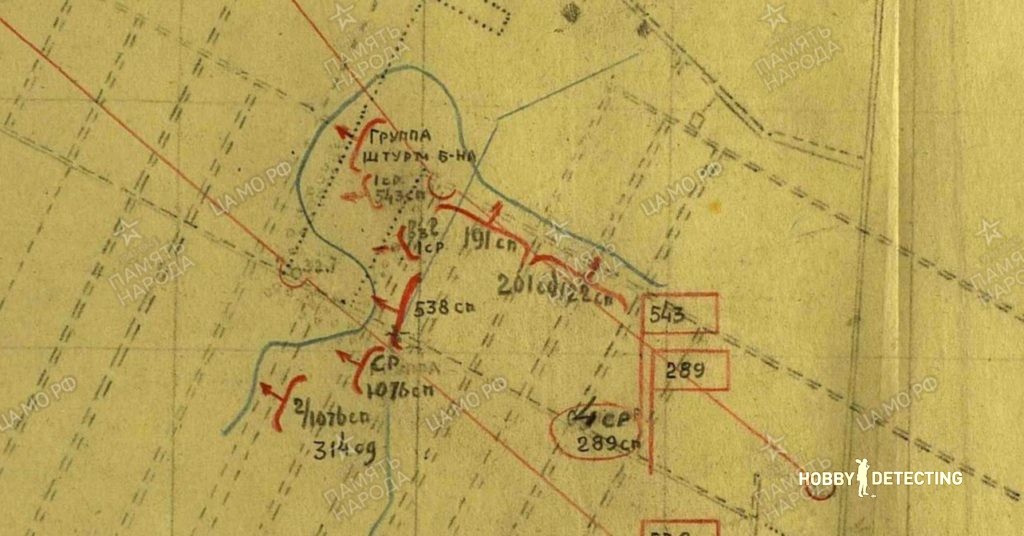 The day of the trip we were meeting at 5 o’clock in the morning. That is early, yes, but there was almost 250 km to go one way. Upon finally arriving, one of the guys suggested to make a group photo. Who can recognize all the detectors? ? 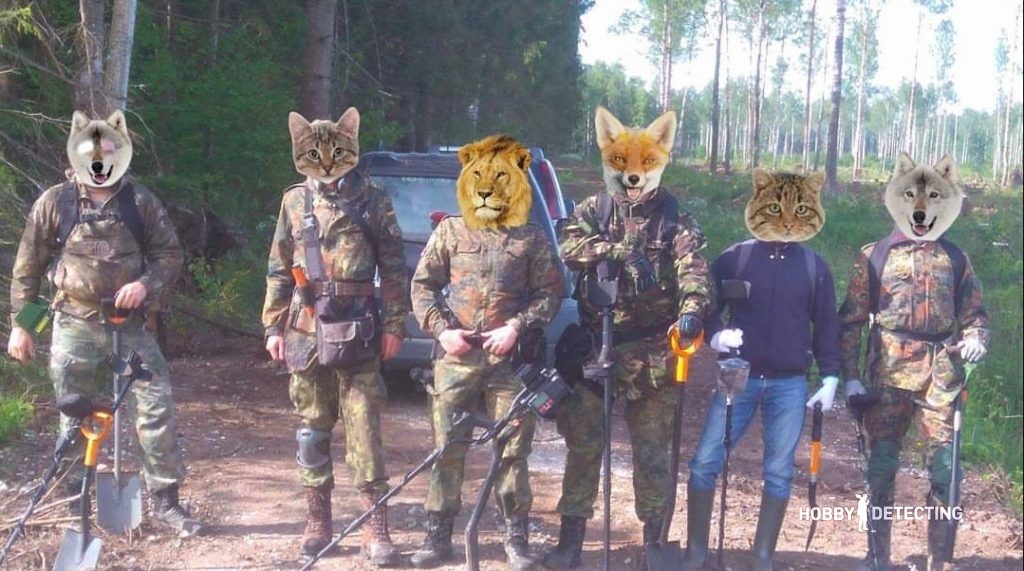 NB! There were no Deus detectors present, but there was an CTX 3030 on this trip.
We started to detect along the forest line but without much results, so we went into the woods. There was moss growing over roots, so if you would step a little away from the roots of the tree, you could fall knee-deep into water. The first thing one should do when looking for a place to start detecting, is to look for some signs that there were fights, for example: helmets, fragments of helmets, different iron and so on. And then one sign appeared: The usual fragment of a Soviet helmet on a tree. 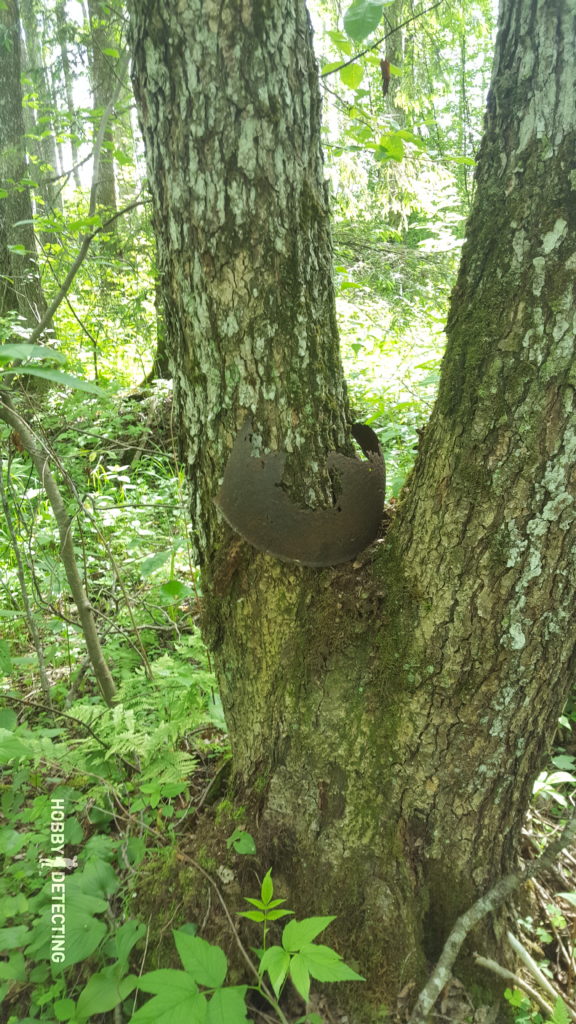 And then the finds started rolling in: all sorts of iron finds were raised, mostly Soviet grenades. There were many of them. Most were the soviet F1 grenade and RG-42s. 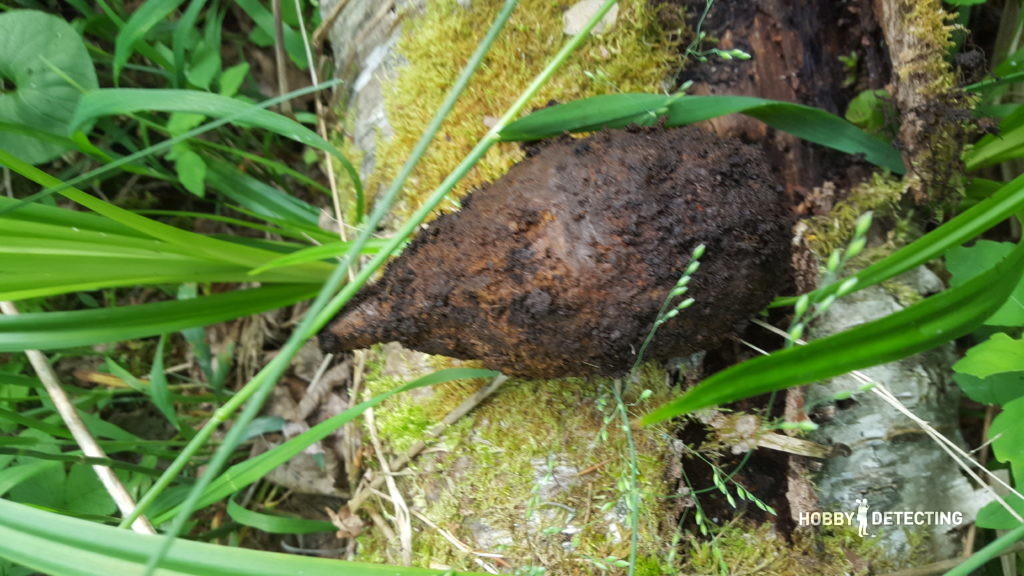 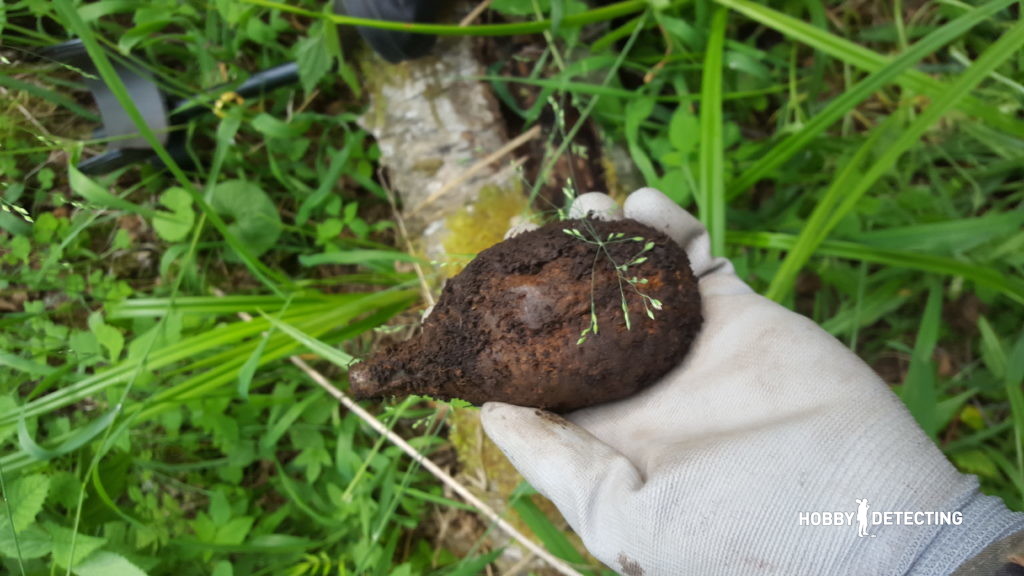 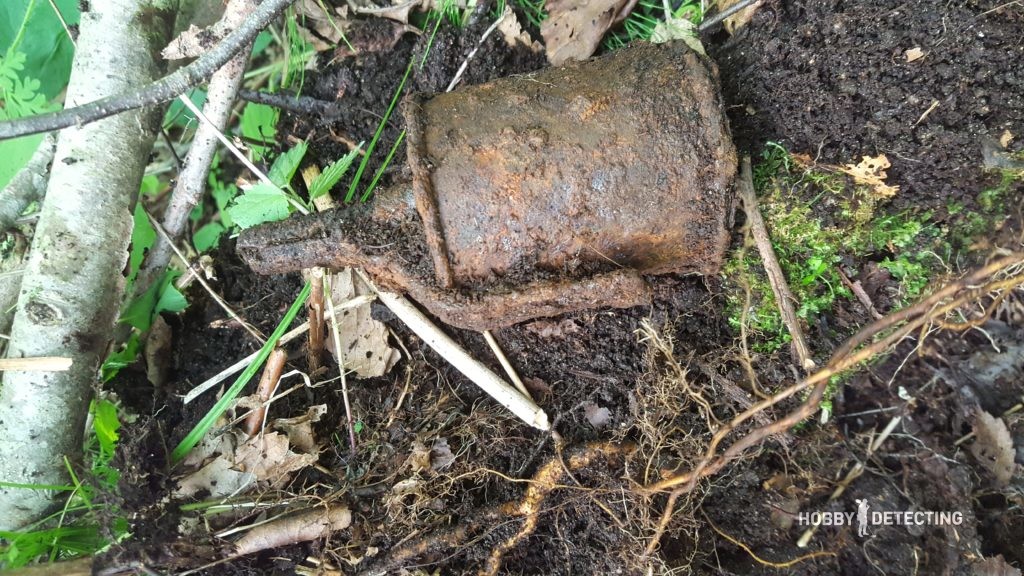 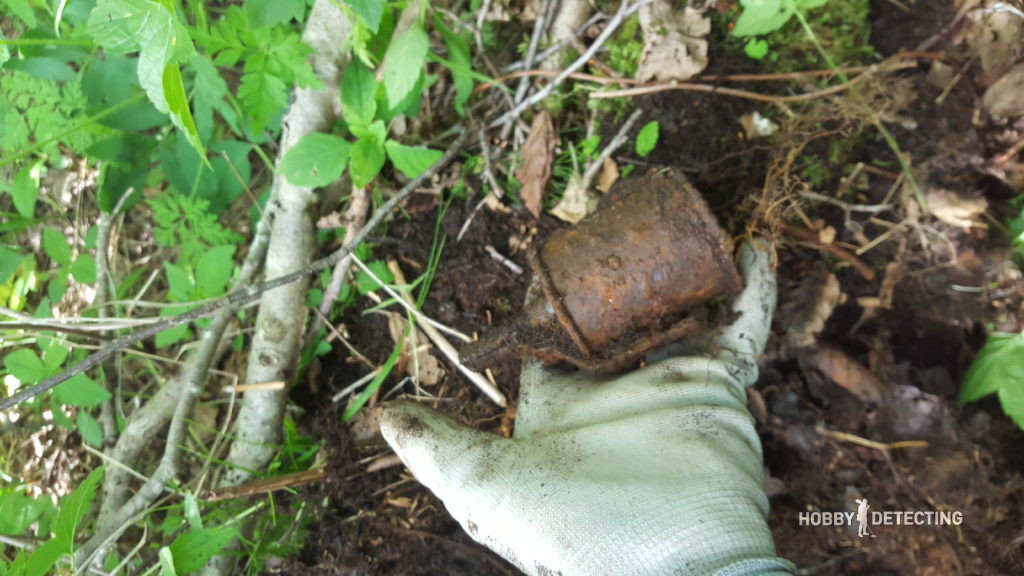 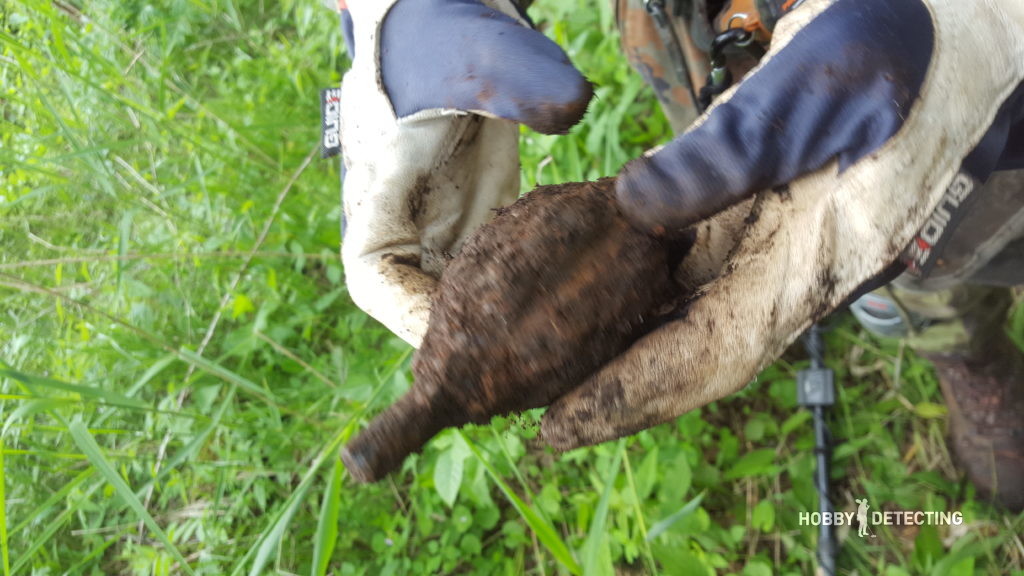 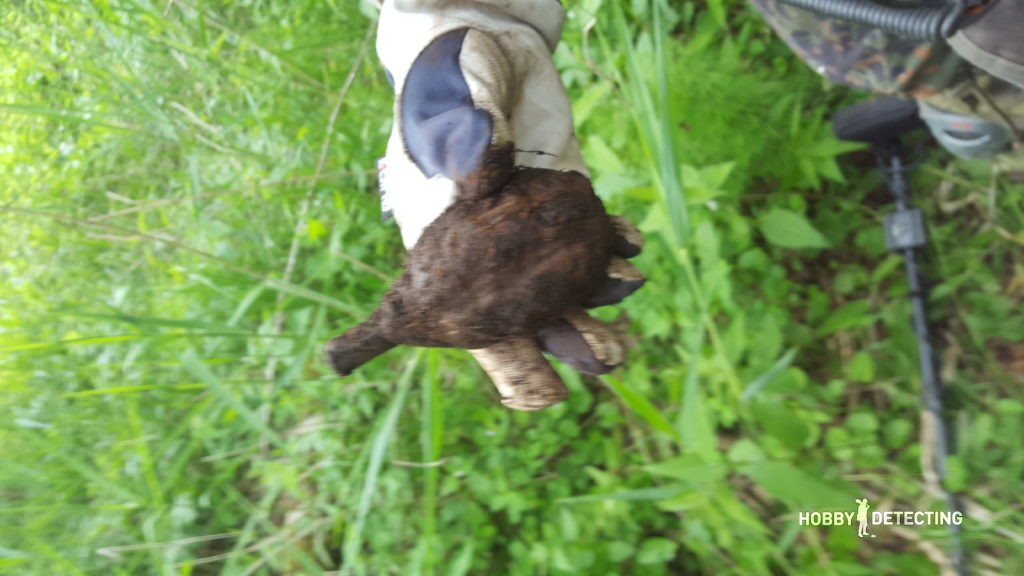 We also naturally found shells, cartridges, fragments, flasks, shovels and other items. Suddenly my friend called me to look at something he had found. 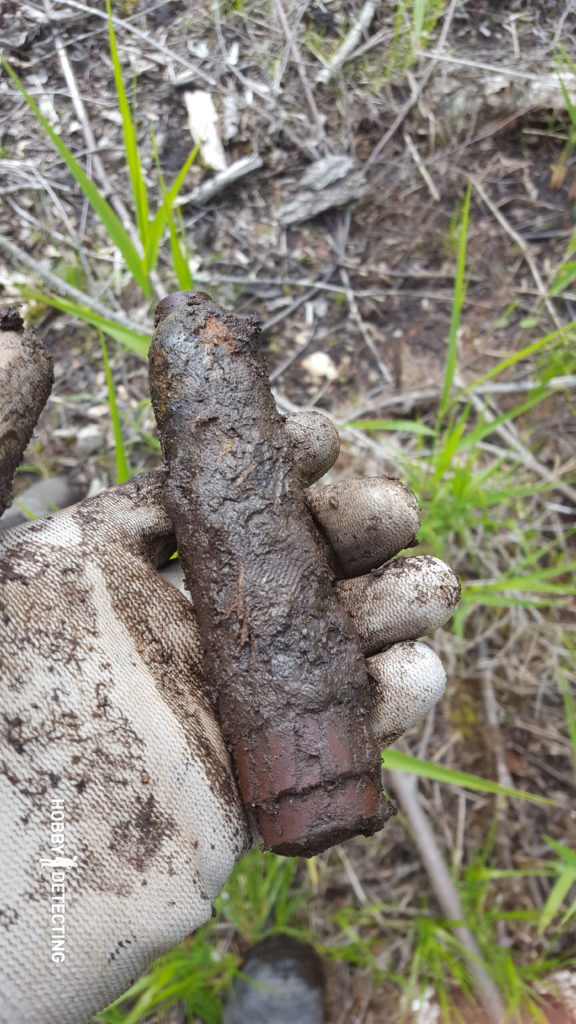 He found an unexploded German rifle grenade, which used to be fired from a special nozzle, mounted on the Mauser 98K carbine. It is better not to take these finds home, but to call the authorities. Or leave them on the spot, but in no case, disassemble and try to somehow “disarm” them.

There were of course also shells of different calibres, some empty and some unexploded. Dangerous finds! 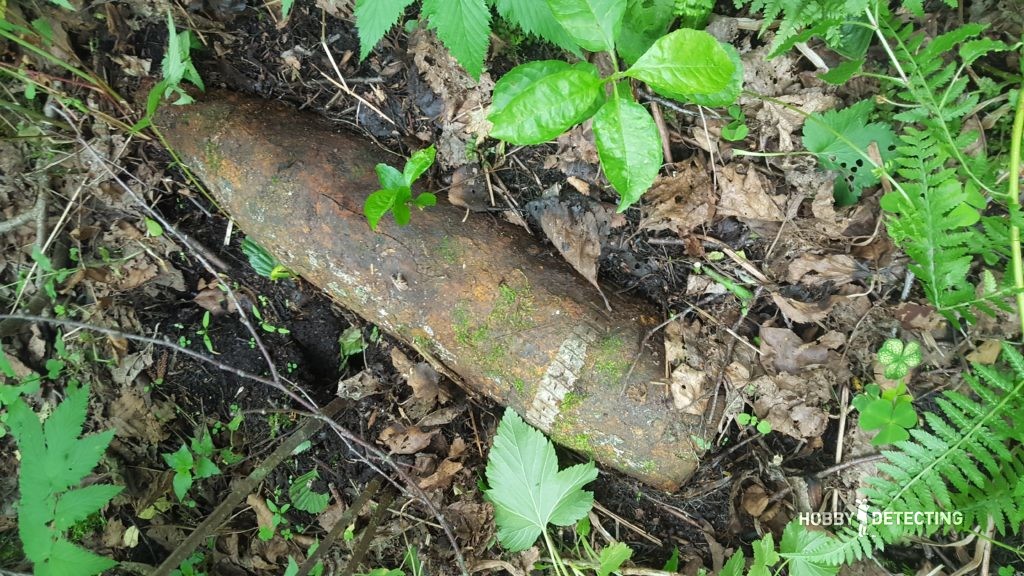 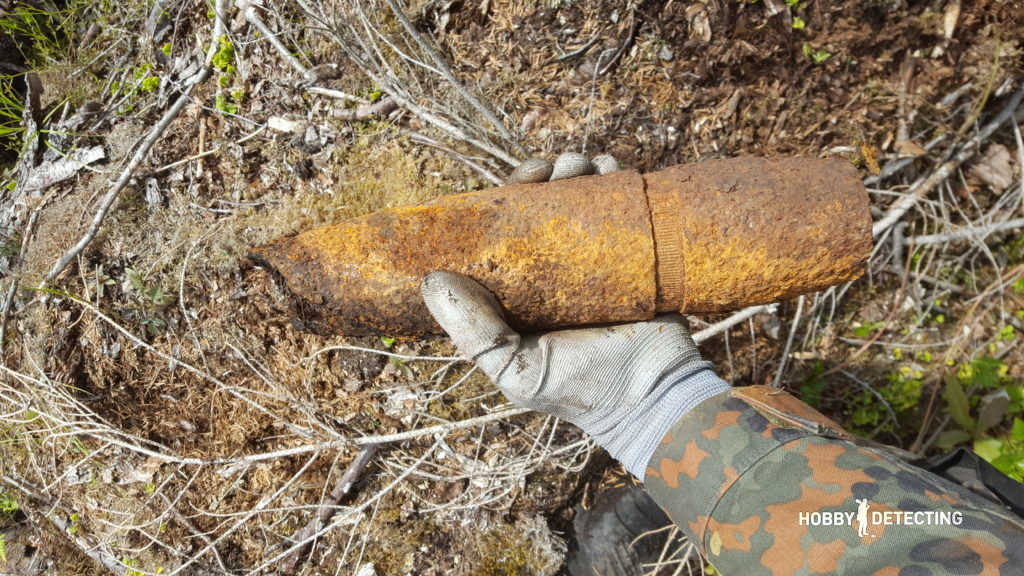 We also found different mortar mines of different calibers, with some laying right on the road! 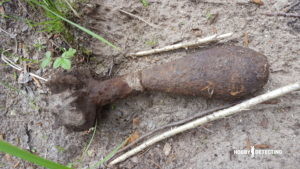 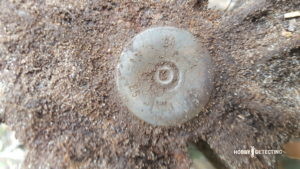 Truly dangerous places! But if there were ammunition and equipment, then there must also have been a weapon there. And so it turned out:
I heard one of the detectorists call us to see something he had found. I started toward him while swinging my detector, in hopes of finding something. Suddenly my detector hit something, and gave an iron signal. “Hmm” I thought “maybe it just hit a tree and gave a signal”, because sometimes then I hit my coil too hard on something it gives a false signal.
I looked down and saw a tree sticking out of the ground, or at least it looked like it. I looked closer at it, and saw that it wasn’t a tree! 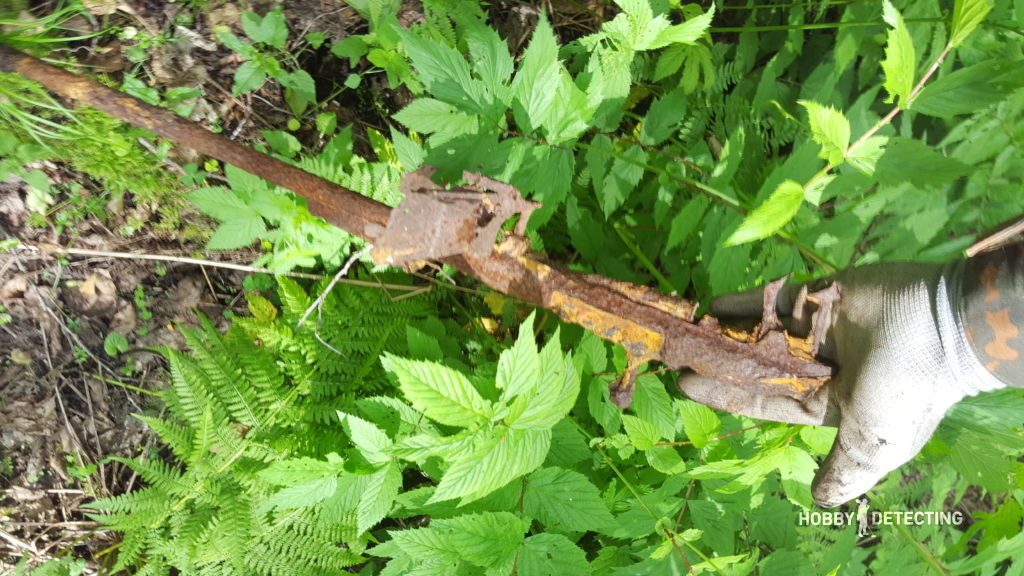 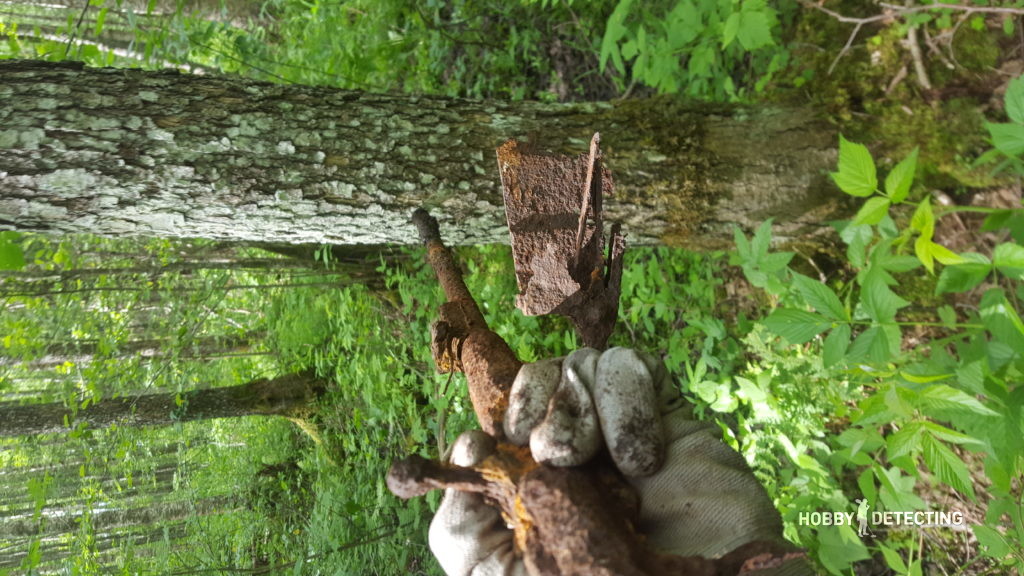 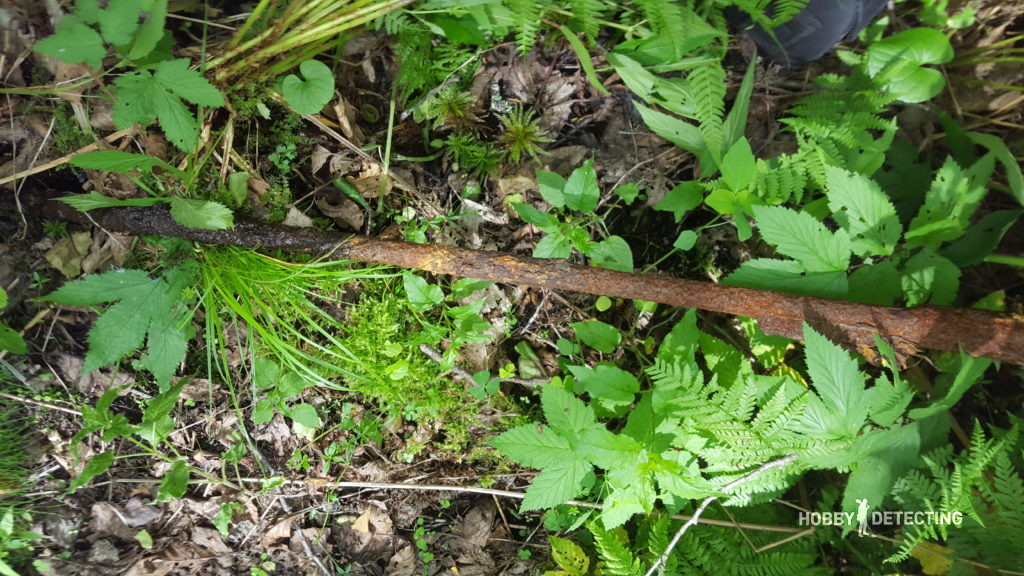 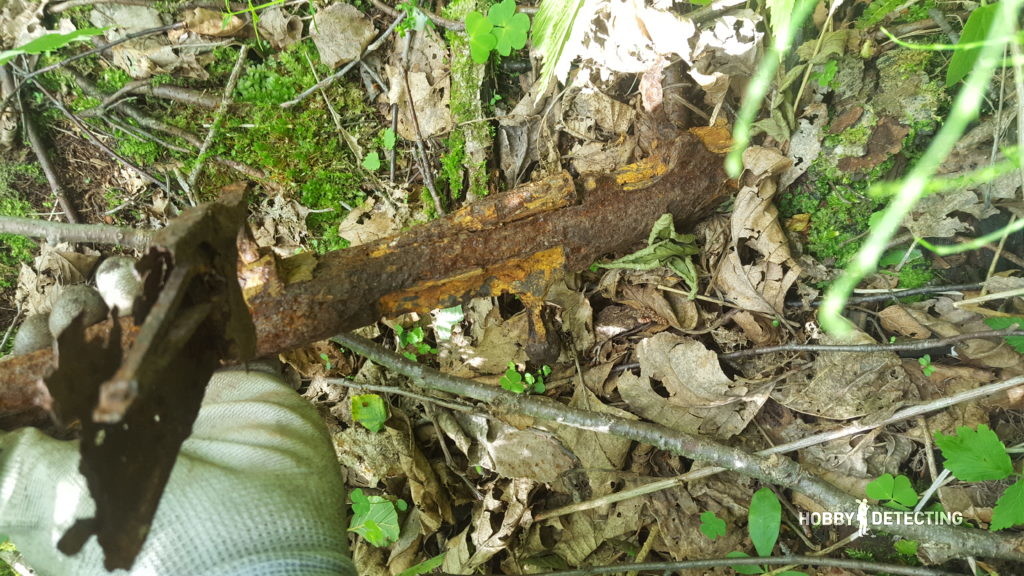 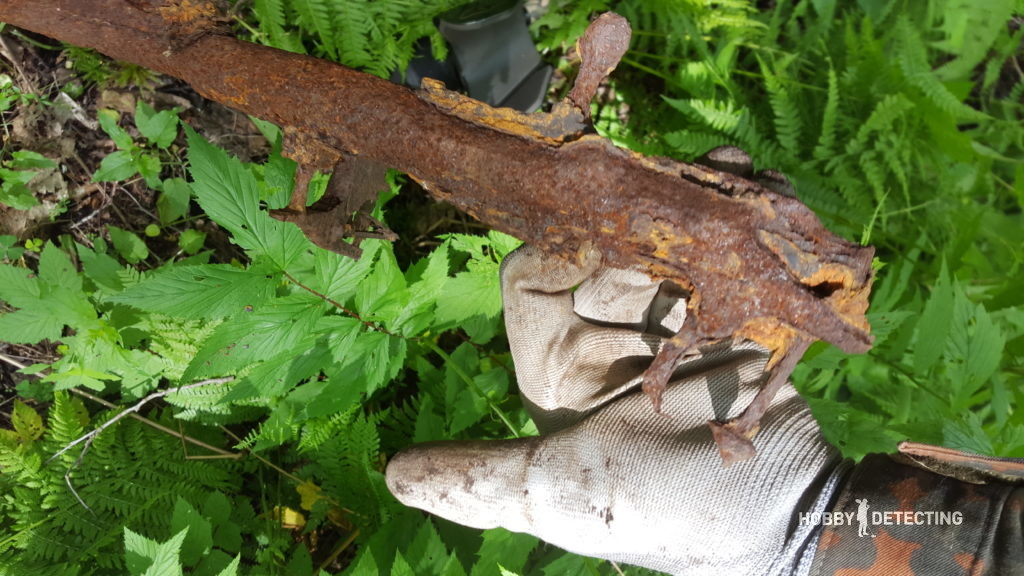 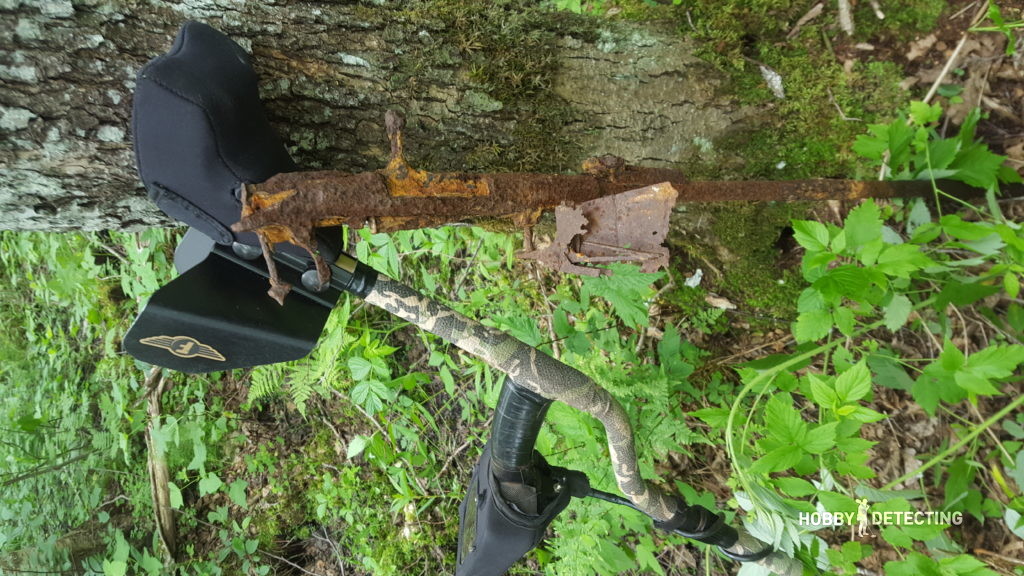 Just to make sure, I pulled it out of the ground and realized it was a Mosin rifle, or rather only what was left of it. That made me so satisfied, because it was my first time detecting WW2 and I had found a weapon! The state of it was obviously not so good after 70+ years in the ground, but it is maybe still possible to clean it up a little, buy the missing parts and make a “souvenir” to hang on the wall. A real rifle with a story, although it will never be possible to shoot from it again, no matter how much you tried. 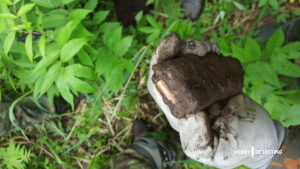 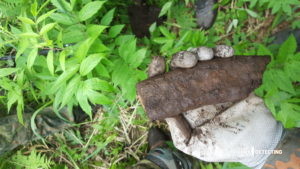 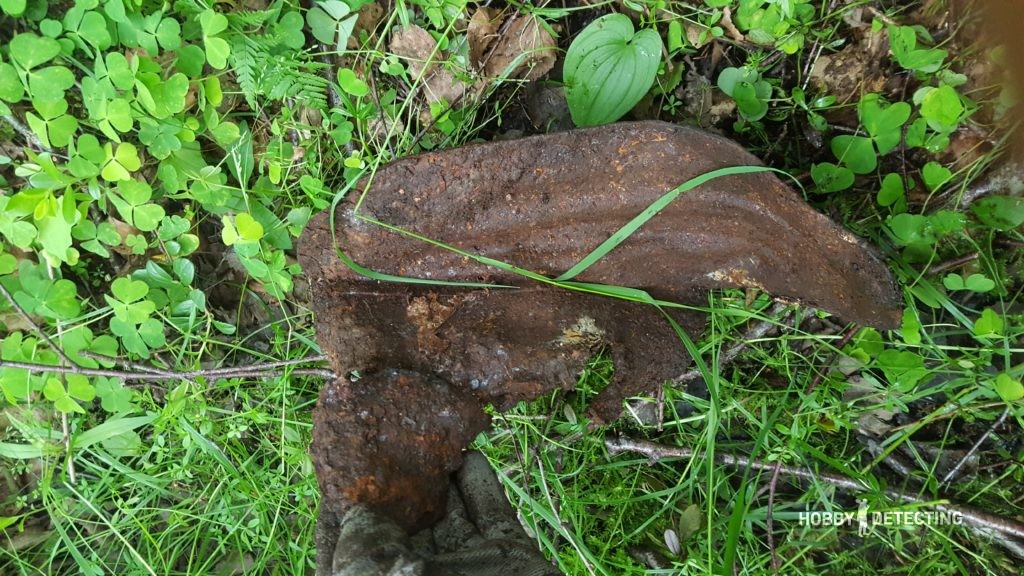 This is all that remains of a German field shovel, found by me. A sad sight. 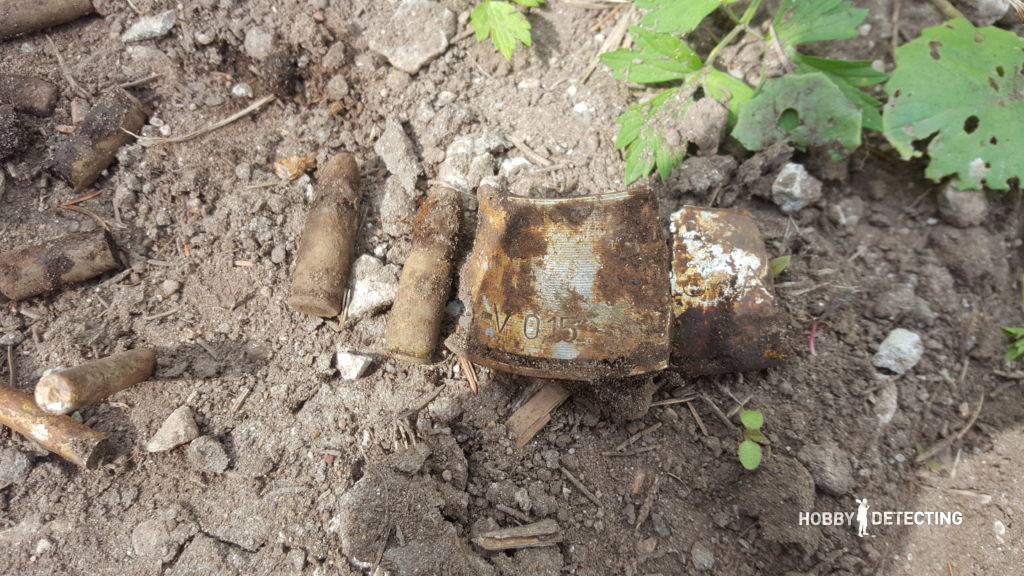 Metal everywhere! The metal detectors were giving signals every other swipe. 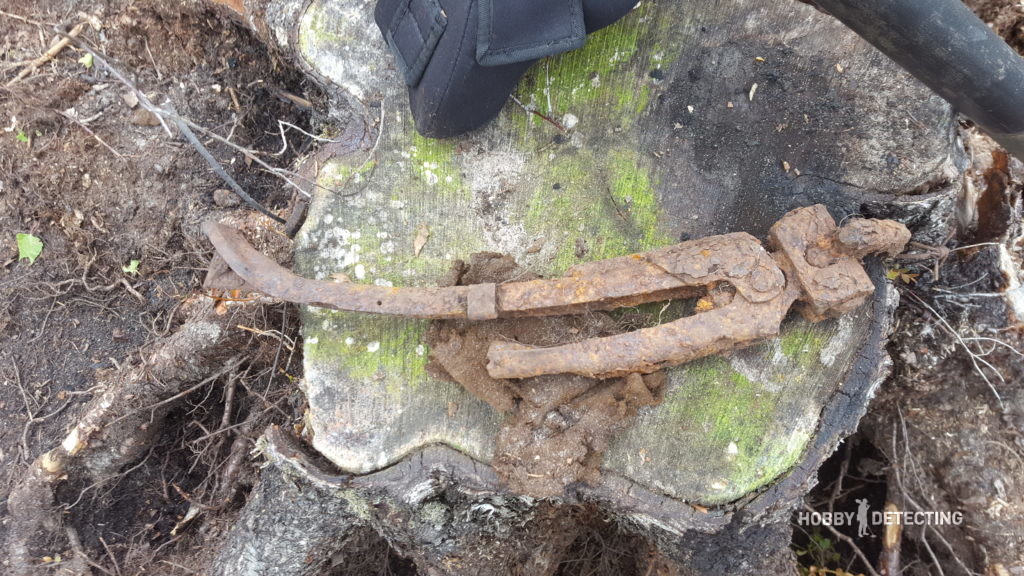 I also found a bipod from the German MG-42 machine gun. It’s in quite a state, I will try to clean it with electrolysis, and I will be sure to share the results with you! 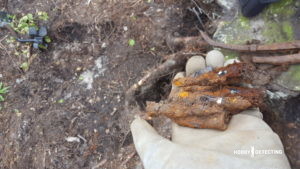 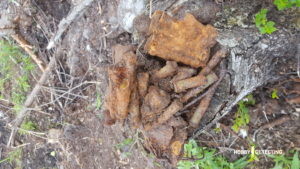 And that’s all that’s left of Soviet cartridges for the Maxim machine gun. The trip was already coming to an end, and ahead of us we had dinner and the way home. Quite an interesting trip, although there were no awful and shocking finds, but I would say it was a well spent time. PS! No Soviet or German soldiers were found.

More interesting posts about WW2 you can find here!