I present to you an object that even experts had trouble identifying. A round copper disc that looks much like a coin, except that the pattern is present only on one side of it.

Photo of the find after cleaning: 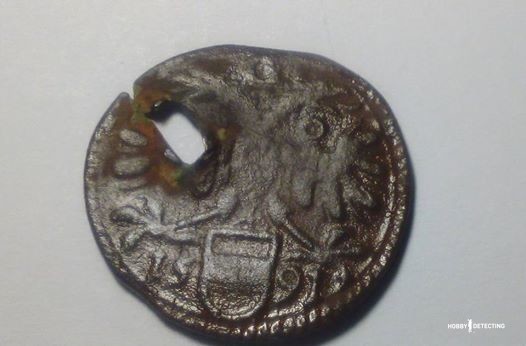 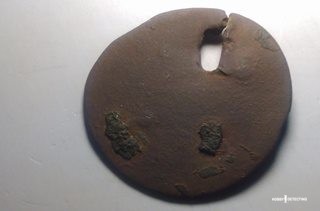 And what is this really? Well, it is a token from the Dutch city of Groningen with the value of of three pennies.

On the token we can see a two-headed eagle with the letter G (for Groningen) on the top and a shield with three horizontal stripes at the bottom. On each side of the shield there is stamped 1591. In addition, under the left head of the Eagle there is a star,  and under the right – a circle. On the reverse side you can barely see four points. The diameter of it is 23.26 cm and the weight is about 2.64 g.

The badge has a characteristic rectangular hole. Maybe it was made as a token, who knows?

This badge was allegedly used as a tavern stamp with the value of three pennies. At that time for three pennies one could have a beer or wine in the urban drinking establishments. Since the Dutch city Groningen was a major trading center of the old Europe, such tokens are found not only in the Netherlands but throughout Western Europe and England. In our case, the badge was found in the Baltic region, more precisely in Estonia. No big surprise! Estonian city of Tallinn (back then named Reval) and Narva were members of the so-called Hanseatic League, who had decent communication throughout Europe.

Finally, I attach a few examples of such badges found elsewhere:

Other interesting finds you can find here!