This is the second part of the Review of the Makro Racer 2. The first part can be found here!

The switch to turn on the detector is tight, as it should be – so it does not turn on or off by itself. I usually set the volume at 40% – that’s enough for me.
With the Racer, it is not just to turn it on and start detecting – you will need to read a little of the instruction. But, there is nothing complicated there – 3 minutes to study the manual and you are good to go.

The first impression that the Macro Racer 2 leaves, can be described in three words: “god damn cannon.” 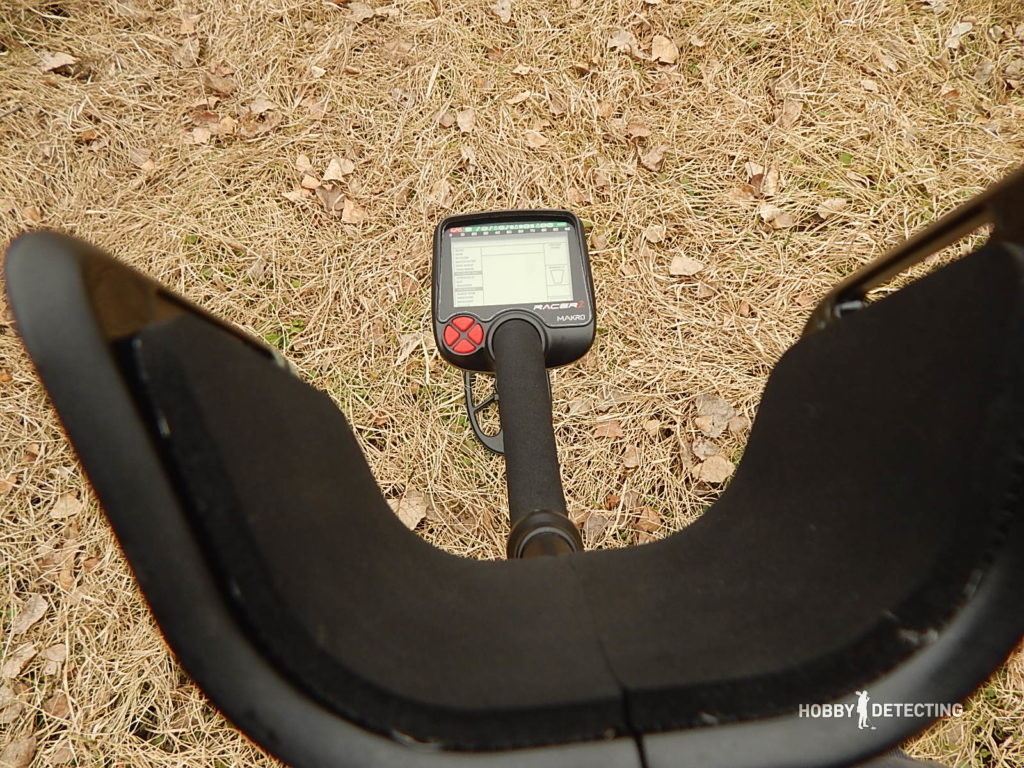 It is terrible to imagine what trenches that must be dug if you have a coil of a larger diameter.

After a little wander, I dug out an interesting lead figure of a bird’s head. 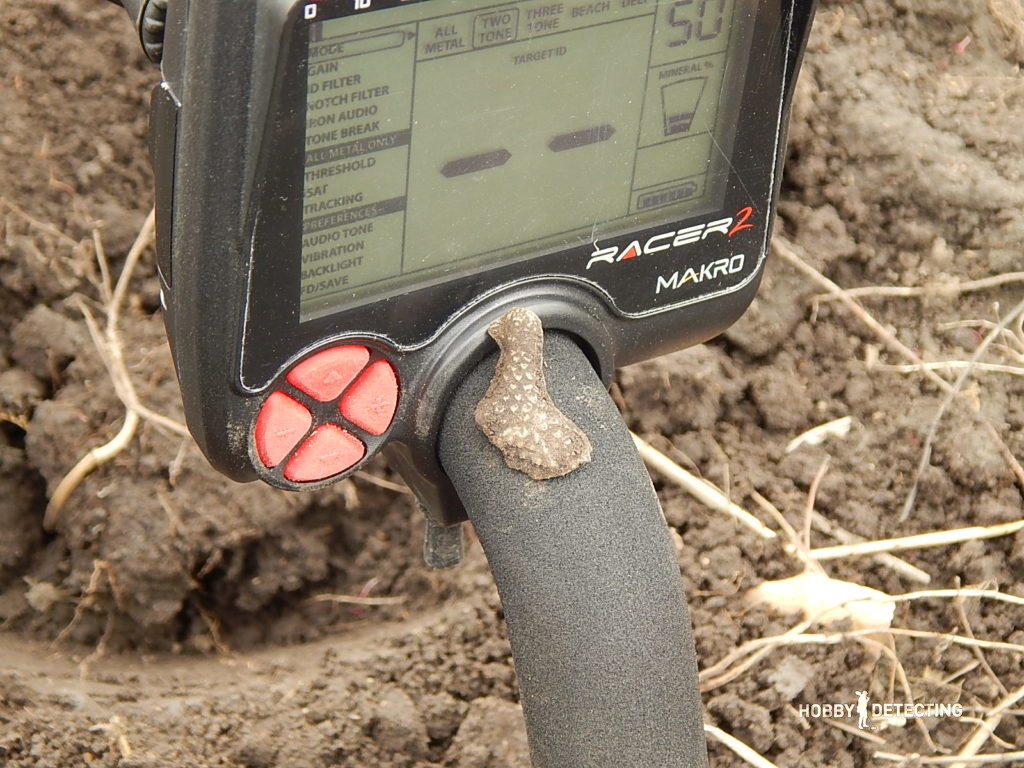 I see this for the first time, so I’m not completely sure what it is.

At a heavy littered place, the detector is not very convenient to study, so I decided to take Racer to a “real” trip.

How much do you have to read the menu to adjust the Macro Racer 2 for detecting? Believe it or not – less than a minute. To do this, it is simply enough to read it one time. Although the metal detector is of a professional level, it does not require a deep knowledge in metal detection, like the detector from Deus.
1. Turn on and turn the potentiometer to a comfortable loudness level of the speaker. For me it is about 50% as the rain cover slightly reduces the force of sound.
2. We need a clean area from metal for ground balancing, by rocking upwards with the search coil we balance the device, after pressing the trigger away from ourselves, like on the Fisher F75.
3. Use the left / right buttons to select the desired search mode.
4. By pressing the “down” button once, we get to the GAIN sensitivity control. We press “to the right” and set the necessary (stable) value.
5. You can click “down” again and adjust the discriminator in ID FILTER. But, the default value is already enough to ignore the small trash.
6. We search!
That’s all you need to get started with Racer 2. As you can see, everything in this metal detector is designed to simplify the setup process as much as possible. No complicated menu and submenu for you – it’s all very simple!

To start off serious, I went to the field where I found a purse full of Prague pennies. 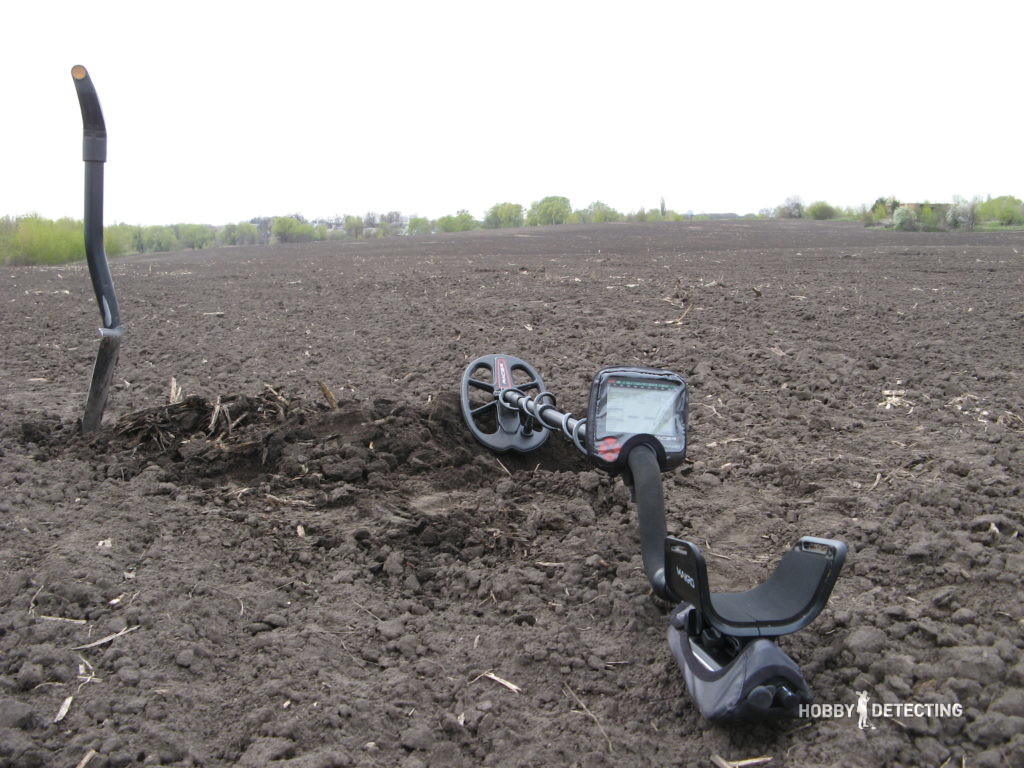 I was warned that form the first time, you will understand the detector – and it just so happened. I constantly adjusted the sensitivity, switched programs, studying the operation of the detector on each. Because of its power, the coil found many targets at different depths. It seems to be simple, and everything is clear, but I can’t master it. Although the place is already searched too many times, the finds still appear. First I found 5 kopeks from 1946. 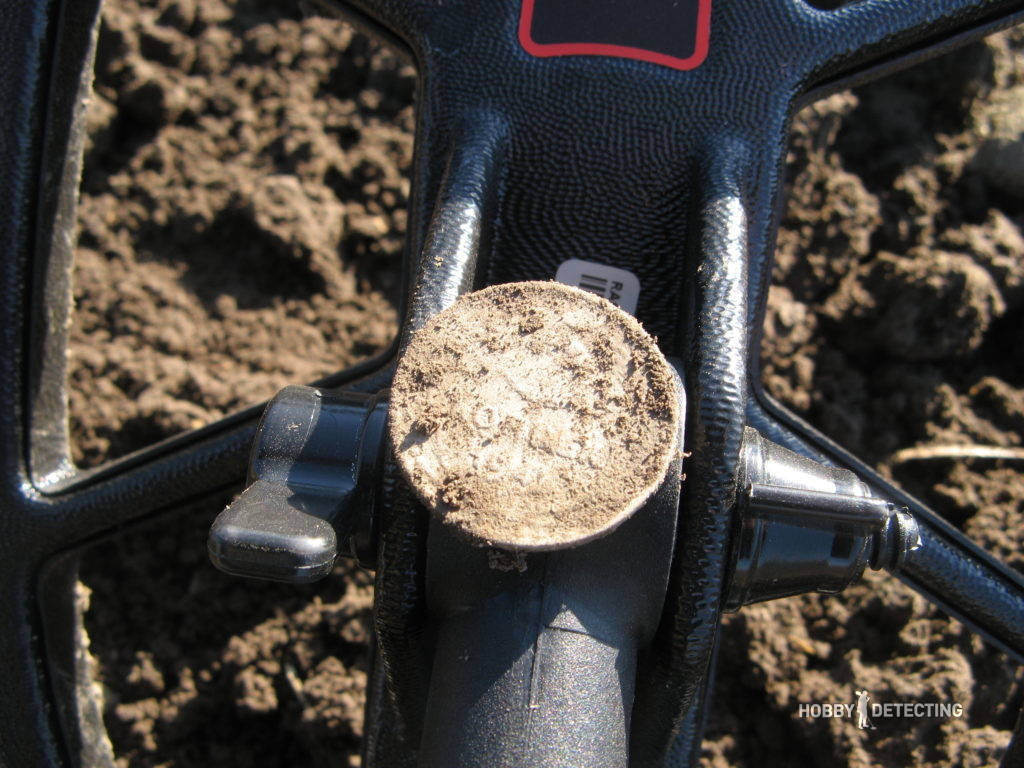 The next coin, which can be considered 100% someone’s pass-by, was a silver solid. 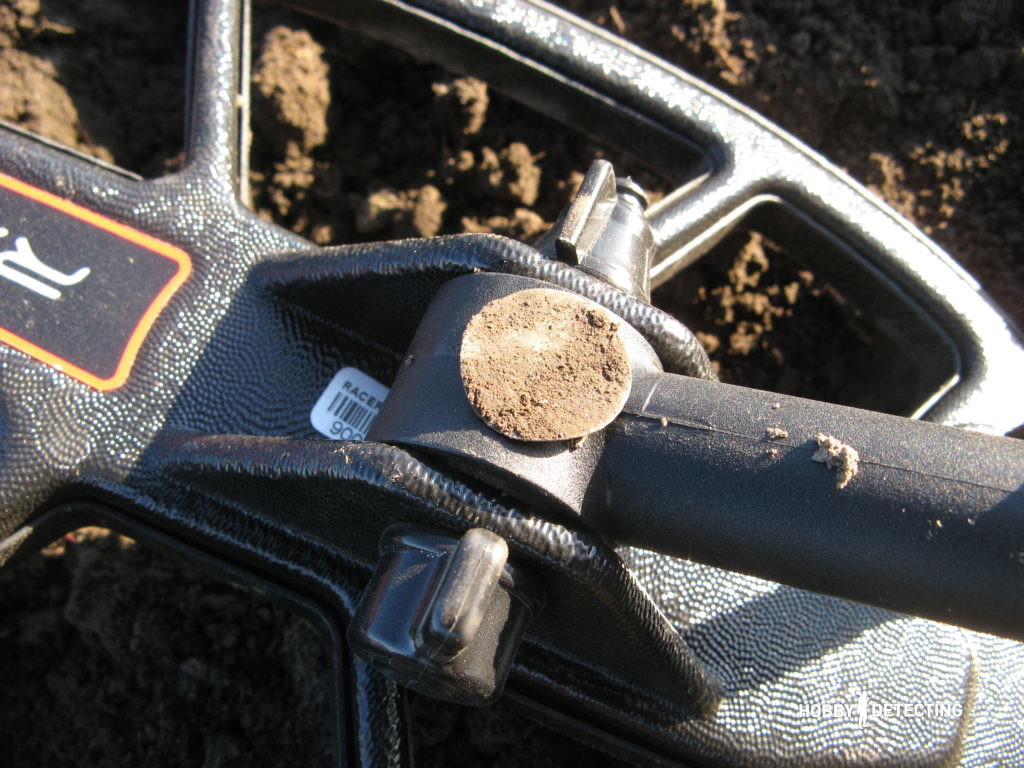 Of course, there was also the usual trash in the form of various aluminum wires and lead bullets.
In addition to color metals, I was very interested in iron. Not quite in terms of scrap metal, but I have brought home from this field so much iron that I had enough to pay back on the gasoline.
Here is an artifact which I found with the Racer: 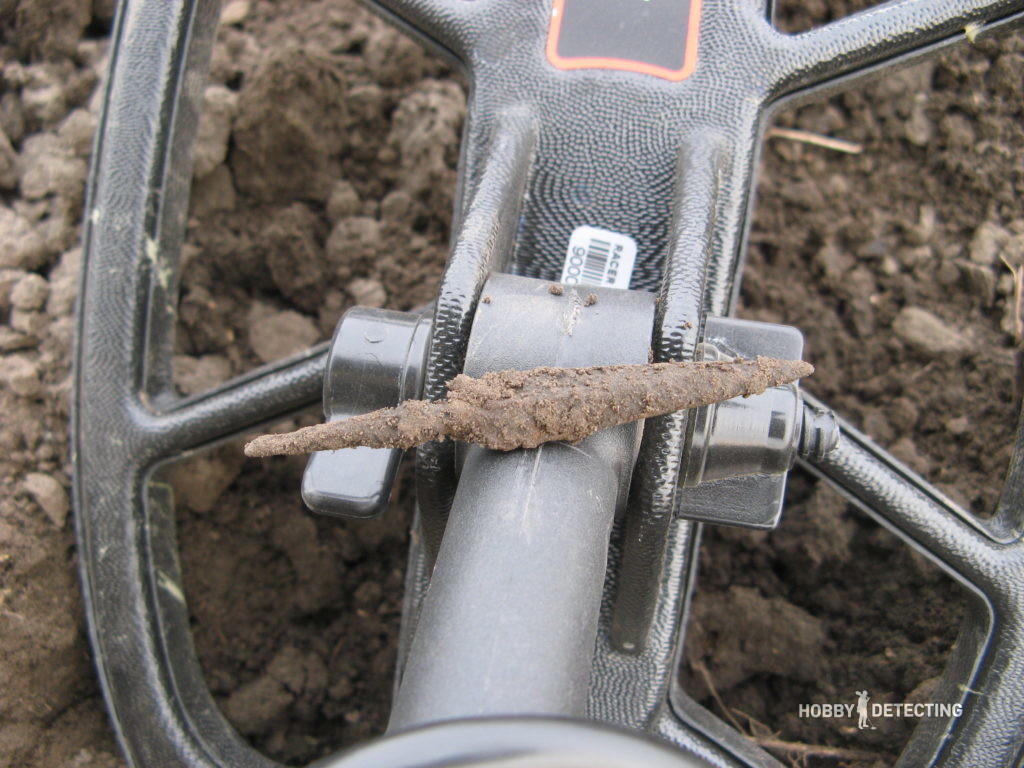 With the Racer 2, even a novice can go detecting. It is true that he must be morally ready to dig holes, or leave sensitivity on default. 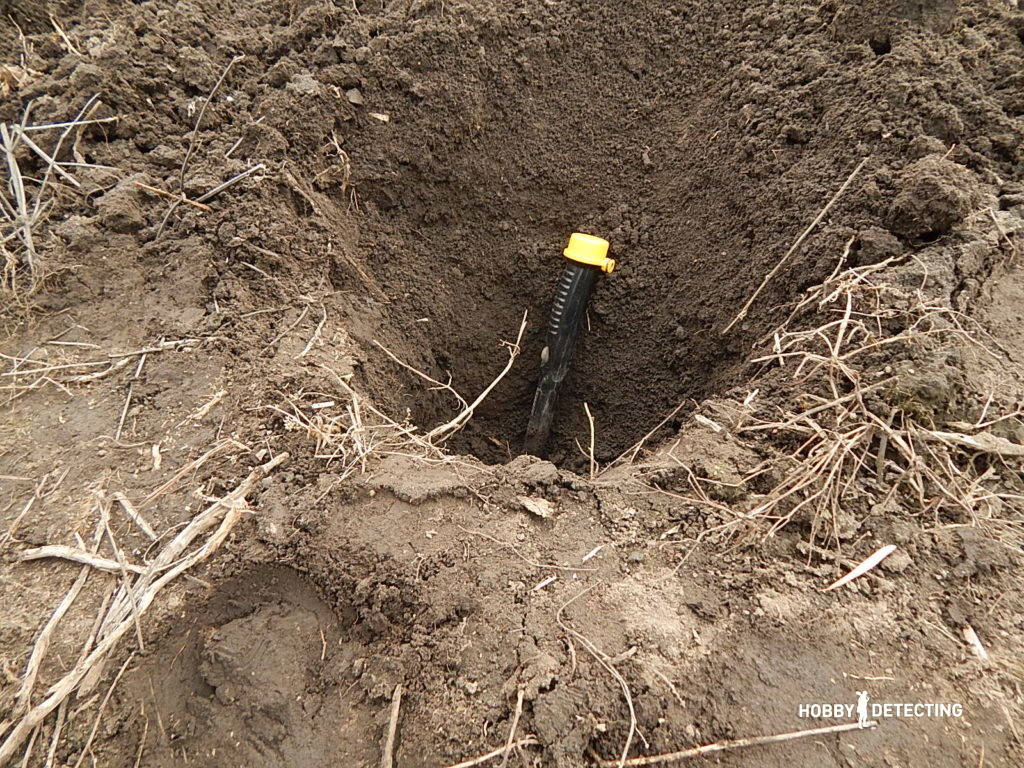 The detecting after which I understood the Racer 2. 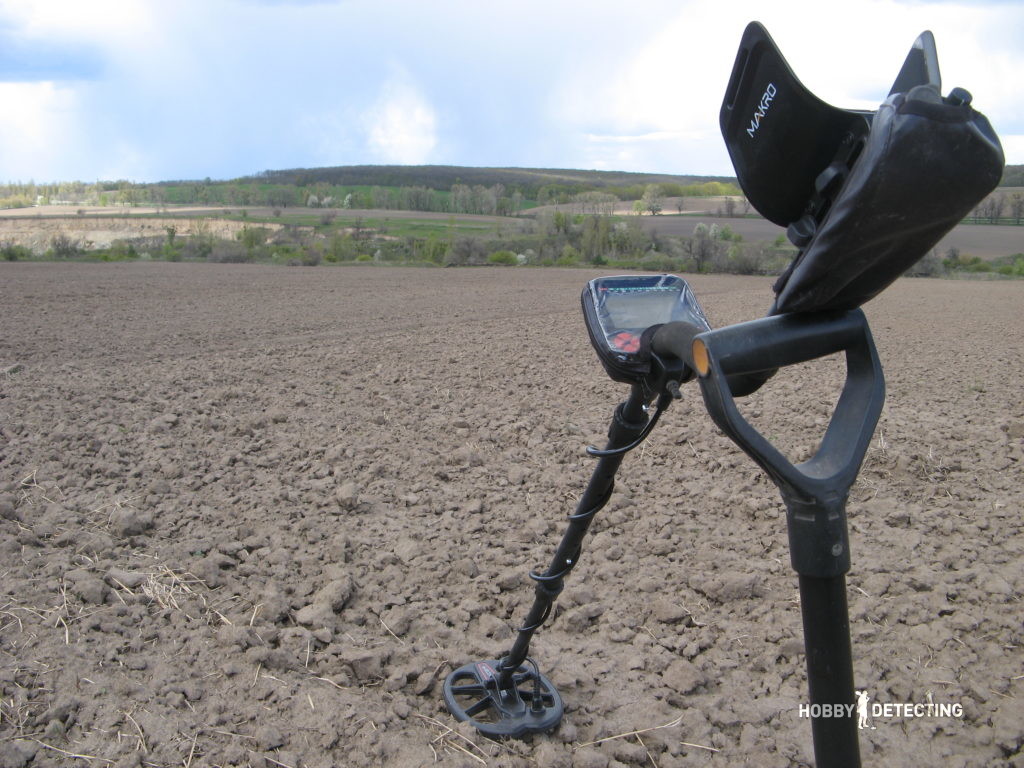 The first find I got was about 10 centimeters deep, on a weak color response. It turned out to be an old bell: 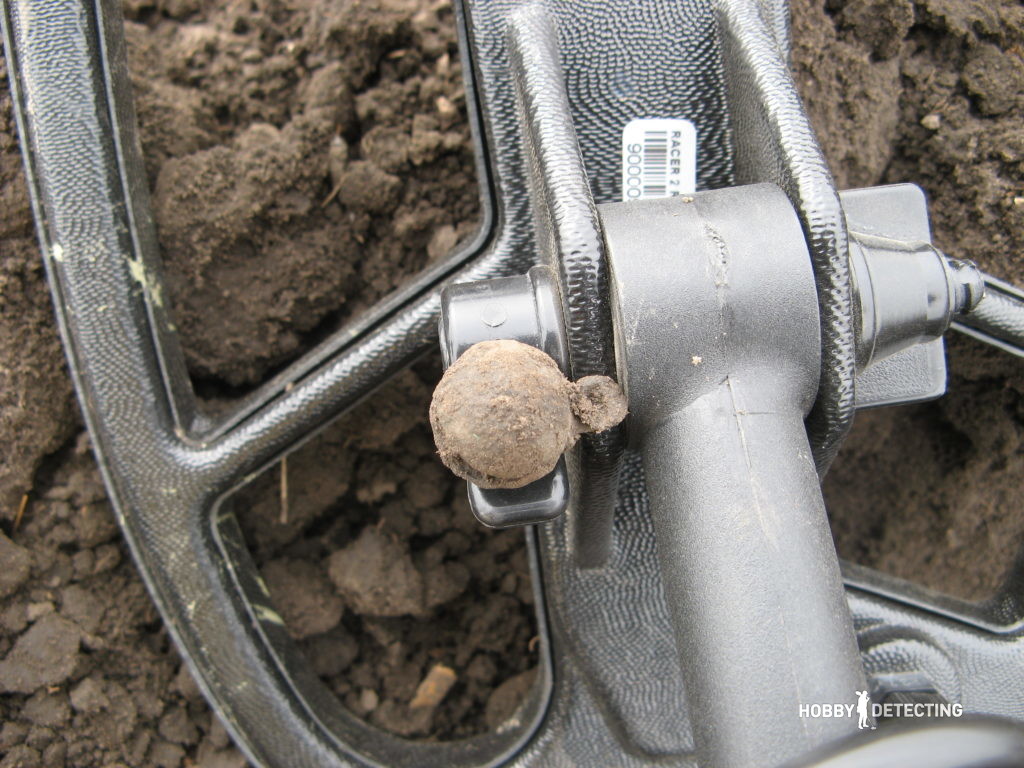 Then I started finding the pellets and different kinds of buttons. 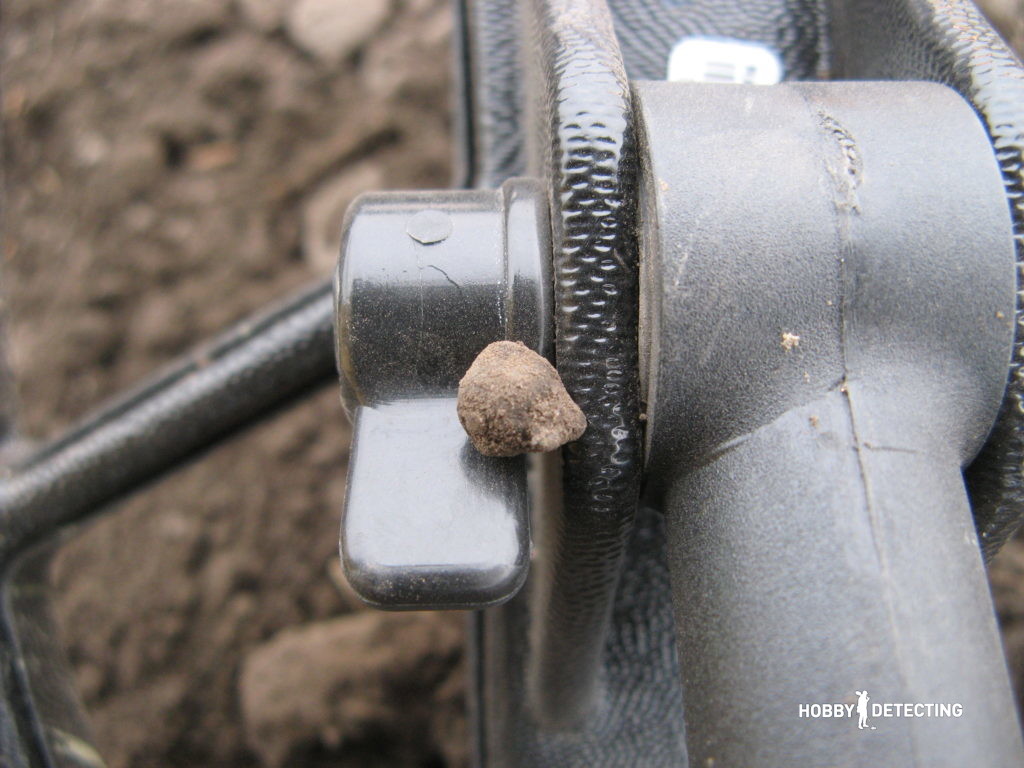 Experimenting with the A \ M mode, the next find that I found was a brooch. 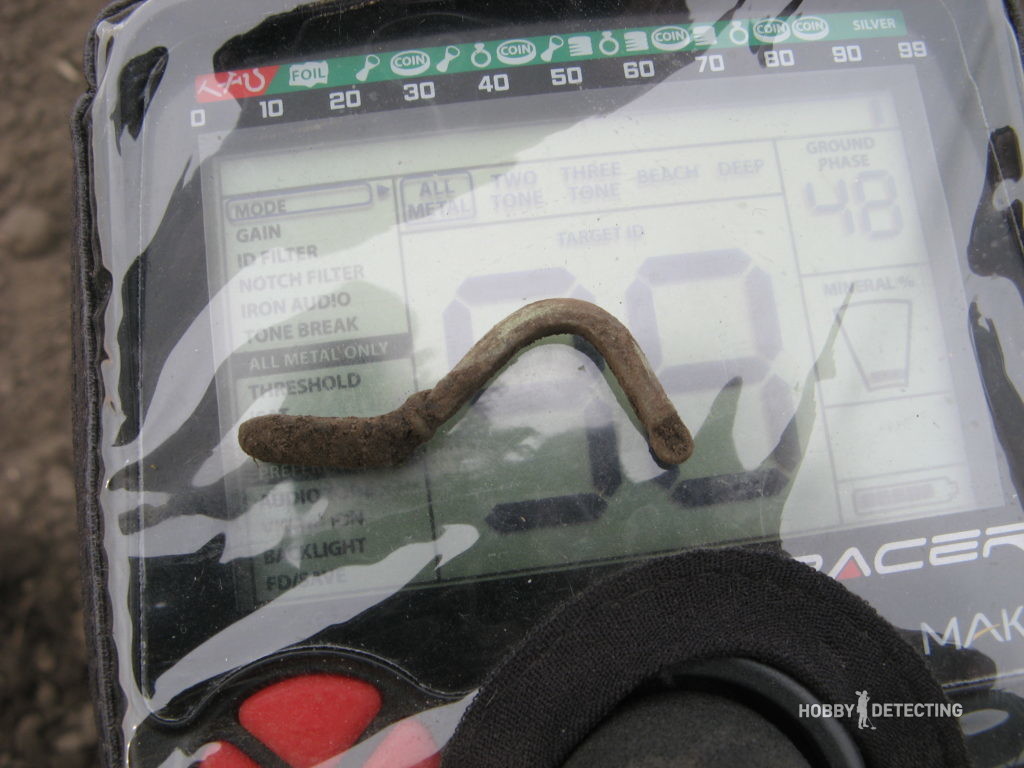 My friends say that they can be found here, though, on the other end of the field.
Well, the best find of the day was a round-end cross from the Kievan Rus. 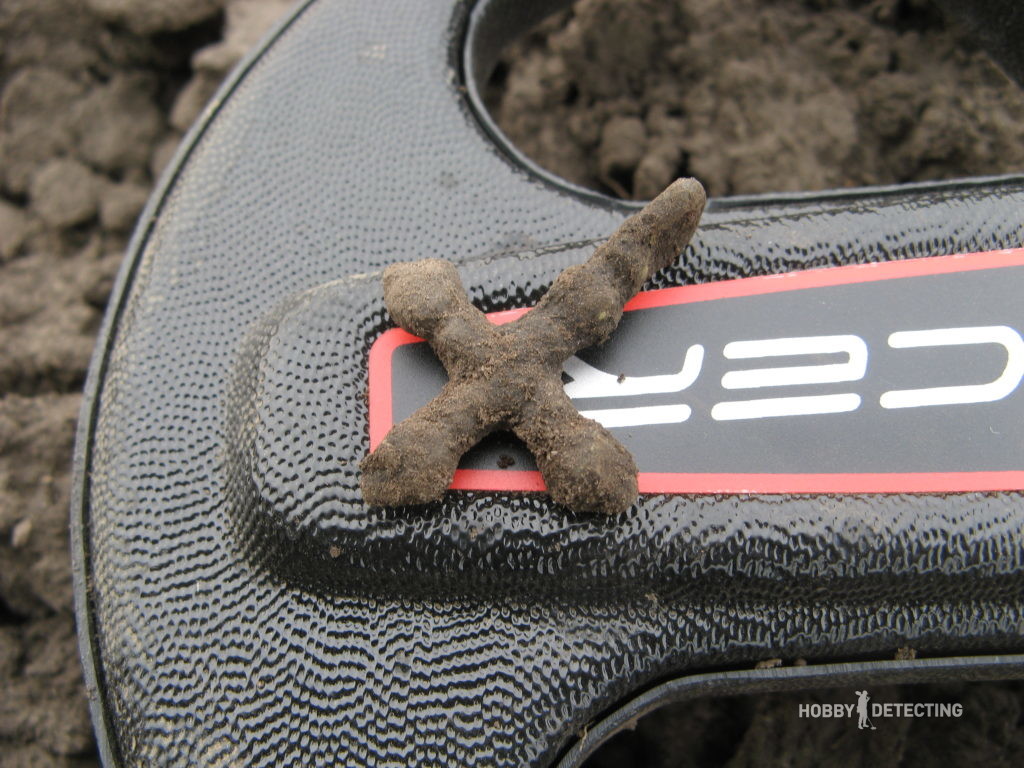 I was the only one who found a cross among 4 professional metal detectors that ironed that field that day. The Racer was also the only one that found an armor piercing tip. 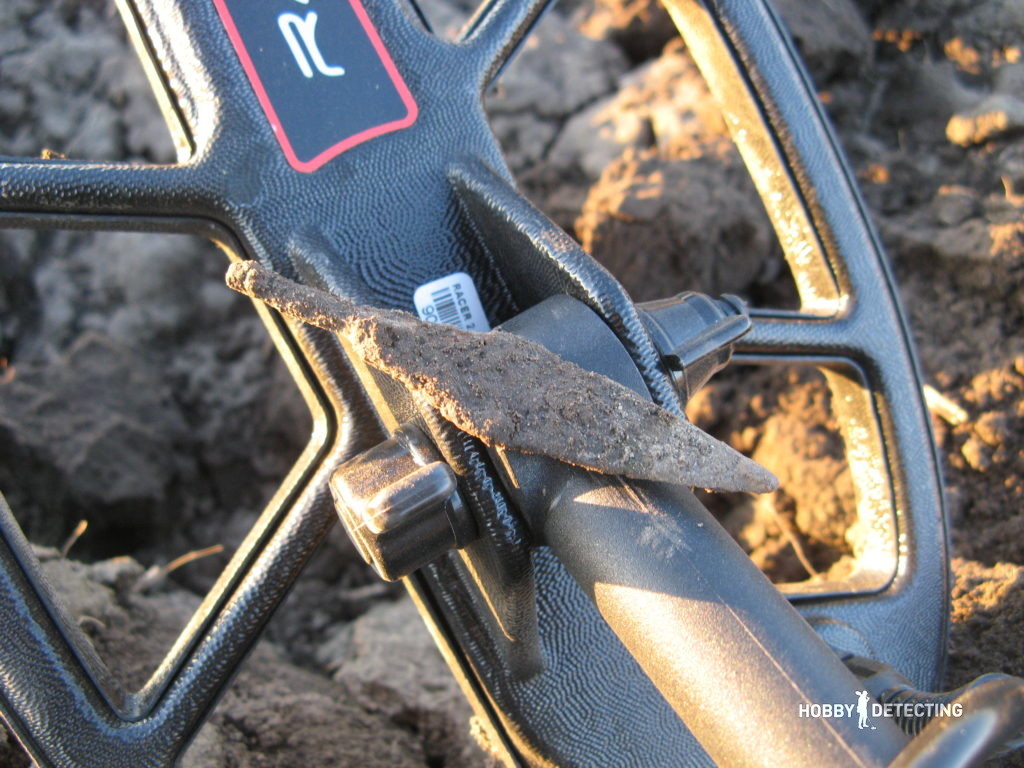 The finds are good, the Makro Racer 2 does not miss the old bronze, but I still can’t seem to understand this Turkish metal detector. And only at the end of this detecting, when I approached my friend with Deus and asked him 2 questions on setting up his device, everything fell into place. And I asked this:
1. How many segments of the discriminator on the Deus are responsible for the iron? He said 10. (The same amount on the Racer.)
2. What segments are excluded from detecting? On the sixth, since the large iron has a higher rating, and it would be worth it to dig.
On the Racer, by default, it is 3-4. Accordingly, the average size of the piece of iron, I conscientiously dig. And settings of 5-6, began to dig extremely useful items! The Macro Racer is a professional-level detector and works perfectly in the discrimination mode. I’m used to walking around with the discriminator off, and I did not realize right away that the device is not afraid of big pressure on the processor, which creates the elimination of some purposes of the discrimination card.

Overall, i got a pretty good impression of the Racer 2.

Want to read more about the Makro Racer 2? Part three of the review is coming soon!