We have long been watching the release of the new Turkish metal detector Nokta Impact. Back in 2015, when it was first announced that they began work on a new metal detector that would have three frequencies and promised to show a good result, we strongly pricked up our ears. Which happened. The impact was released in 2017 and we have written about this novelty release already here: Nokta Impact Released. For most people, Turkey is perceived as a beautiful place to go on vacation, but now they have learned to make intelligent metal detectors.

My colleagues and I were choosing what to buy; the STD (standard) or the PRO package. We ended up on the PRO, because the sum of the difference was small, and it was easily covered by the price of one “sniper” coil. And so, the package finally arrived. 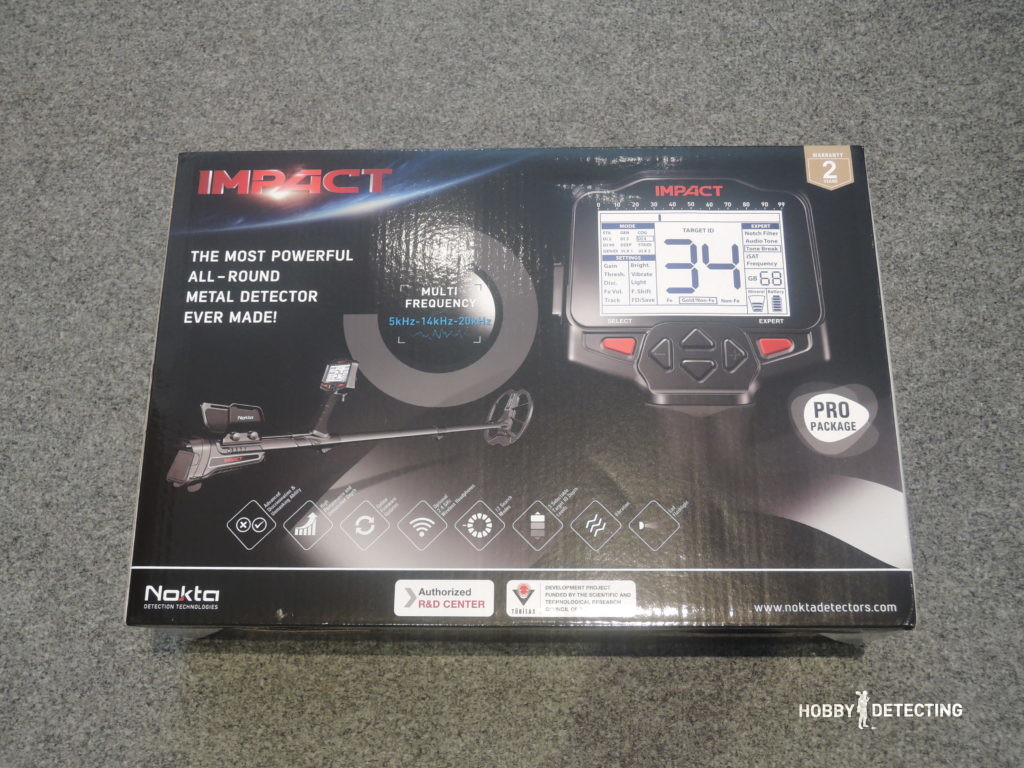 A beautiful box. Everything is as it should be – with a description of all the advantages and functions. A beautiful box is already a big guarantee of success for the subsequent sale of the device, if you need to suddenly update the detector in a couple of years (save the box!) 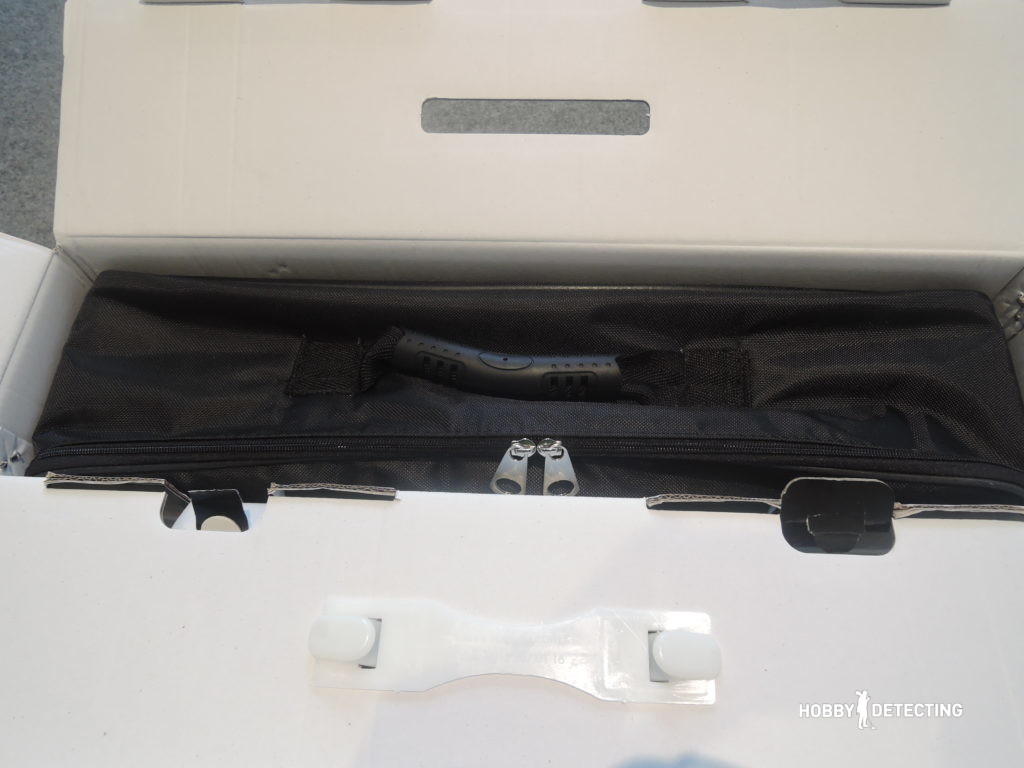 In the box, there was a bag with a comfortable carrying handle! A good start, what’s next then? 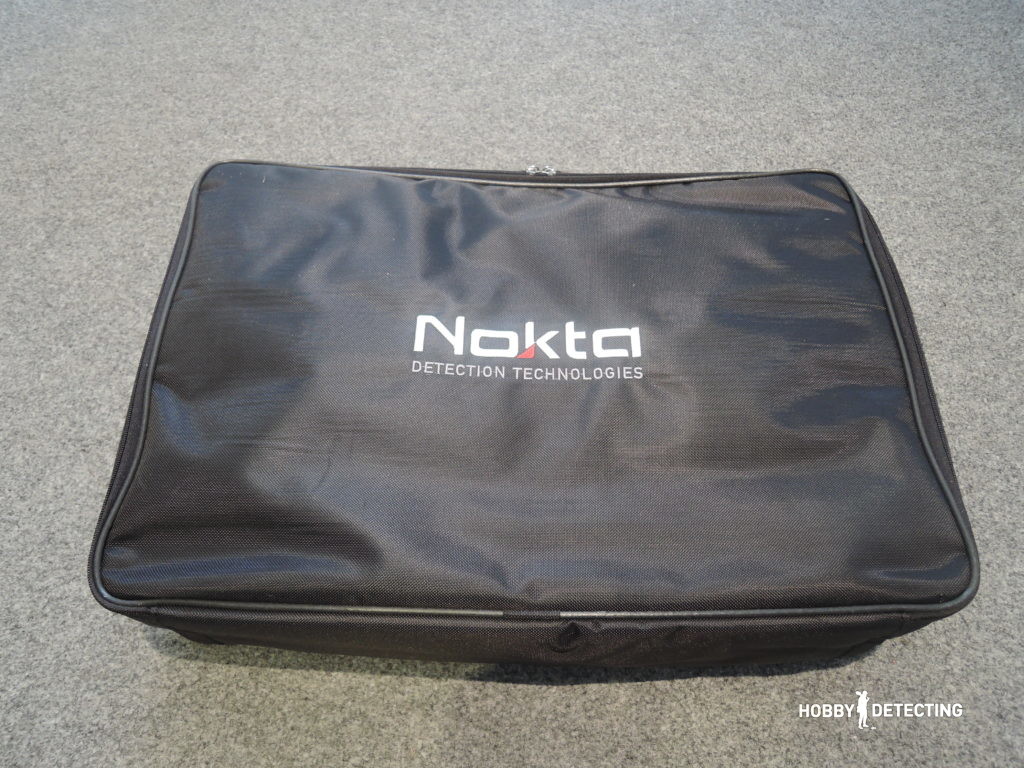 The bag itself. Here’s what I have to say about the bag – comfortable, has a carrying handle on the top, the back has a strap to hang on the shoulders like a backpack. Conveniently. The bag can hold a lot of useful stuff, like the metal detector (un-assembled) and enough room for the two coils, batteries, you can still put a bottle of water, sandwiches, radio, camera, pin pointer and finds bag! 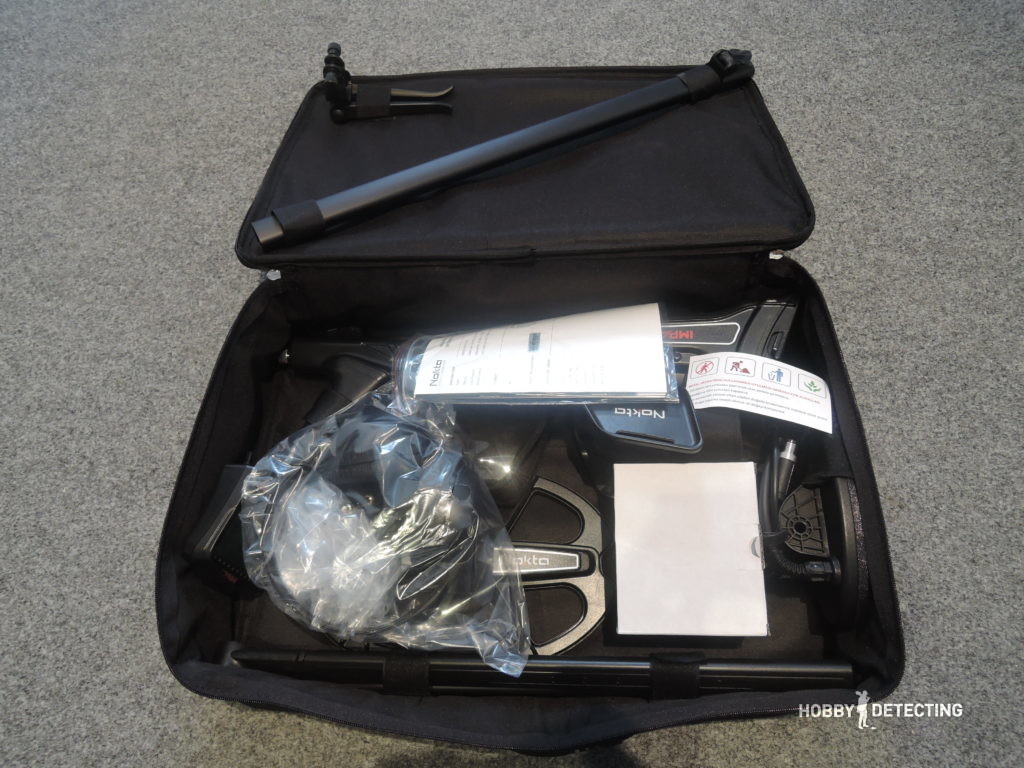 In the bag everything is neatly packed and beautifully folded. Some people, who probably do not have enough money for other bags, walk with bags from Nokta to the gym, but oh well, we will keep the metal detector in the bag, so that at any moment you can jump into the car and go detecting! 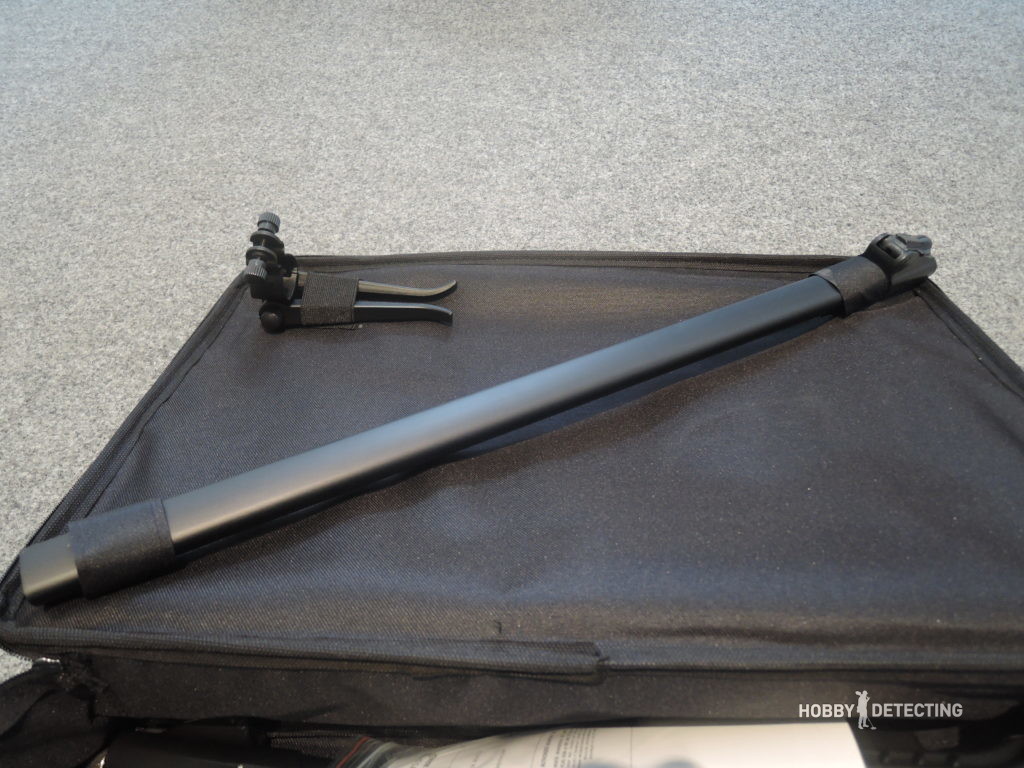 Even in the top of the bag you can attach the bipods for the metal detector and the middle bar. Rational use of space, however! 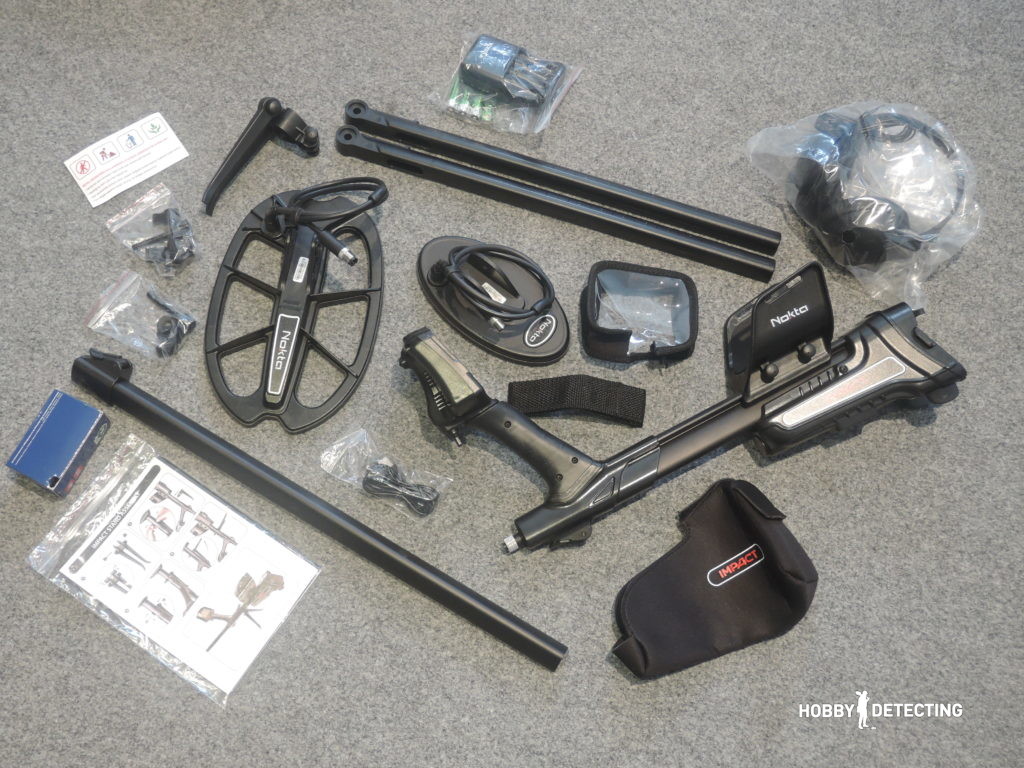 And here is the kit itself. What does it include?

Extra coils are very useful! In fact, because Impact is in such a price class that it is not available for beginners, but an experienced treasure hunter will already be aware that two coils (universal and sniper) will be able to cover the basic needs for detecting. Of course, I would like another coil at 13 “, for example, but we’ll see…

-Backpack
About the bag I have written some above. Convenient and good, it fits everything you need for detecting, except the shovel just does not fit, but it’s best to keep the shovel apart – fewer scratches.

-Covers for control box and battery apartment
I have not been detecting without covers for a long time. Covers are very important for a metal detector that is not protected from water leakage. We do not live in the Middle East, we have rain and sun that can take place several times a day.

-Headphones
Do you dig without headphones? You will lose finds! About the headphones, I have long been telling everyone that it’s better to dig with them, because you will hear all the quietest signals and get the finds that ordinary diggers missed without headphones.

-Coil covers
In fact – each coil has its own cover, so you can worry less that you will scratch or spoil the coil when you strike it against a stone on detecting, for example.

-Battery pack/batteries 220/12V
Another saving. A normal set of batteries with charging costs about $15-25.

Bipod
It will be necessary to check its utility out detecting and evaluate.

-Additional lower rod
It’s useful, in case you break one, or it’s also convenient to hold each coil on one rod, like that it will be easier to change the coils on the detector! 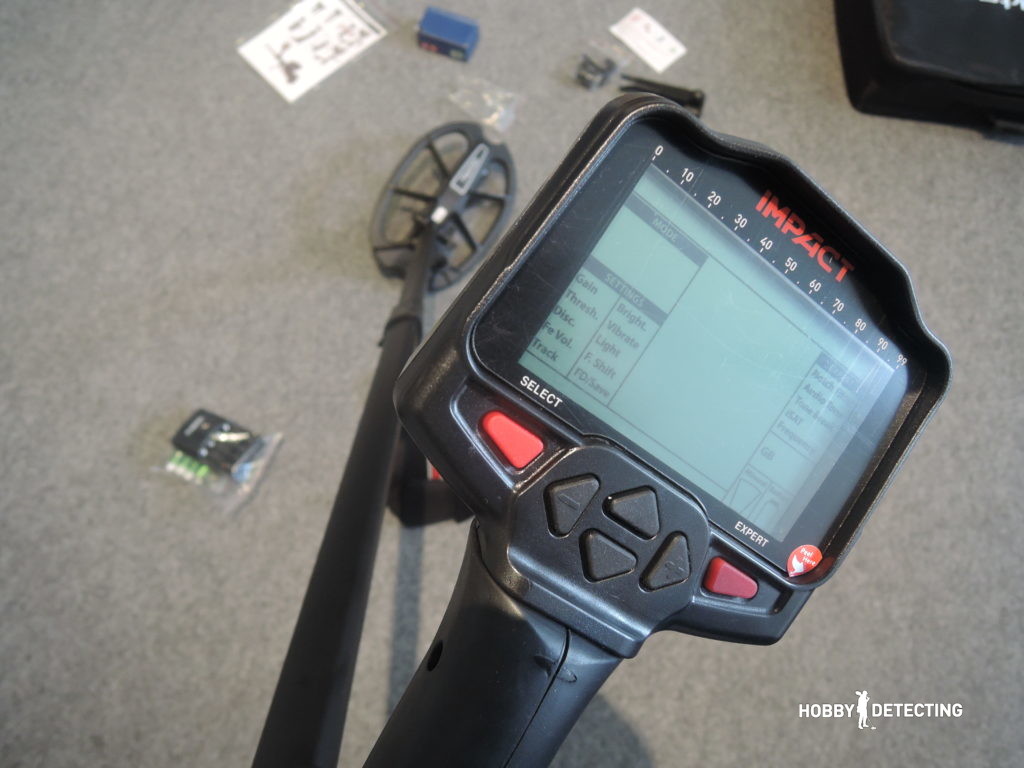 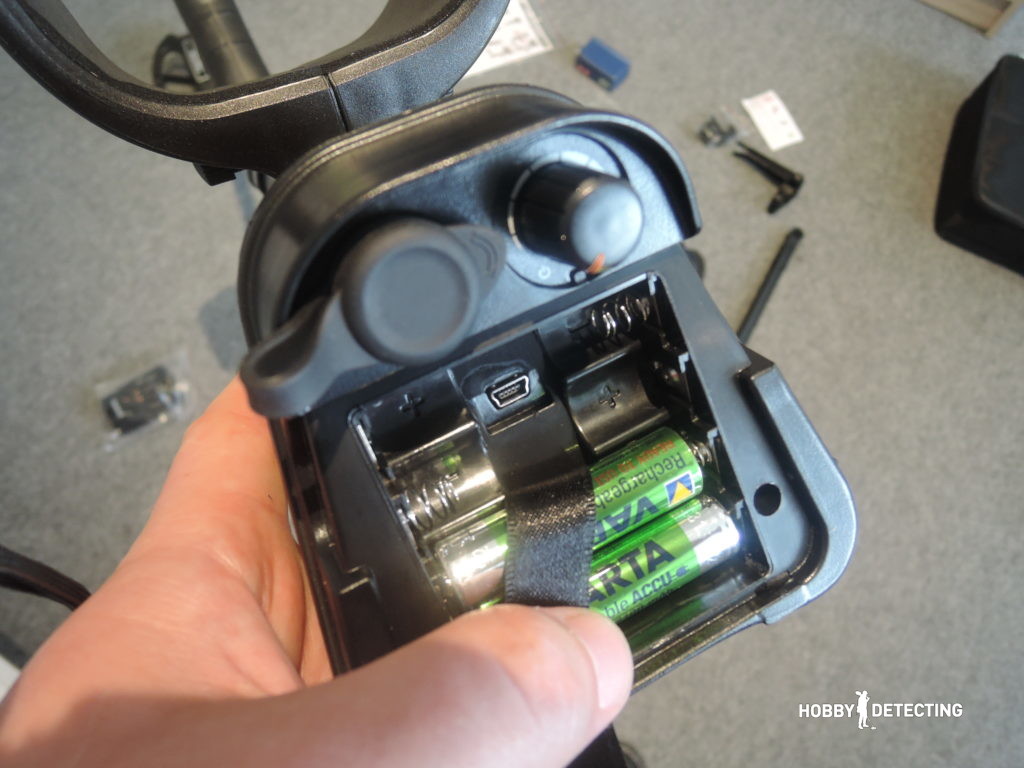 An important addition is that there is a cable in the kit, but it is inserted into the connector, which is located directly in the battery compartment. Remove a couple of batteries and you can already connect your device to the metal detector and update the firmware. The main thing is that the update is free of charge! About how to do the update – we’ll write in a separate post.

What do you think about this detector? Maybe you have it yourself?

Nokta Impact – the long awaited novelty of 2017, we collect all the information about it here!