Golden Mask WS-105 And WS-106 Headphones: Differences, Overview, Specifications And Connecting Them To The Metal Detector! (Didn’t You Know It?)

When I bought my first Golden Mask metal detector, the 5+ model, then there were wireless headphones included, the model WS-105. These standard headphones arrived in a box, which was very useful for detecting because in it you could not only fit the charger for the headphones but also spare batteries (just in case). Now that I’m interested in trying an analog metal detector (the Golden Mask 4 PRO S model from MDetectors), there were already new headphones released, the WS-106. What is the difference and what has changed? 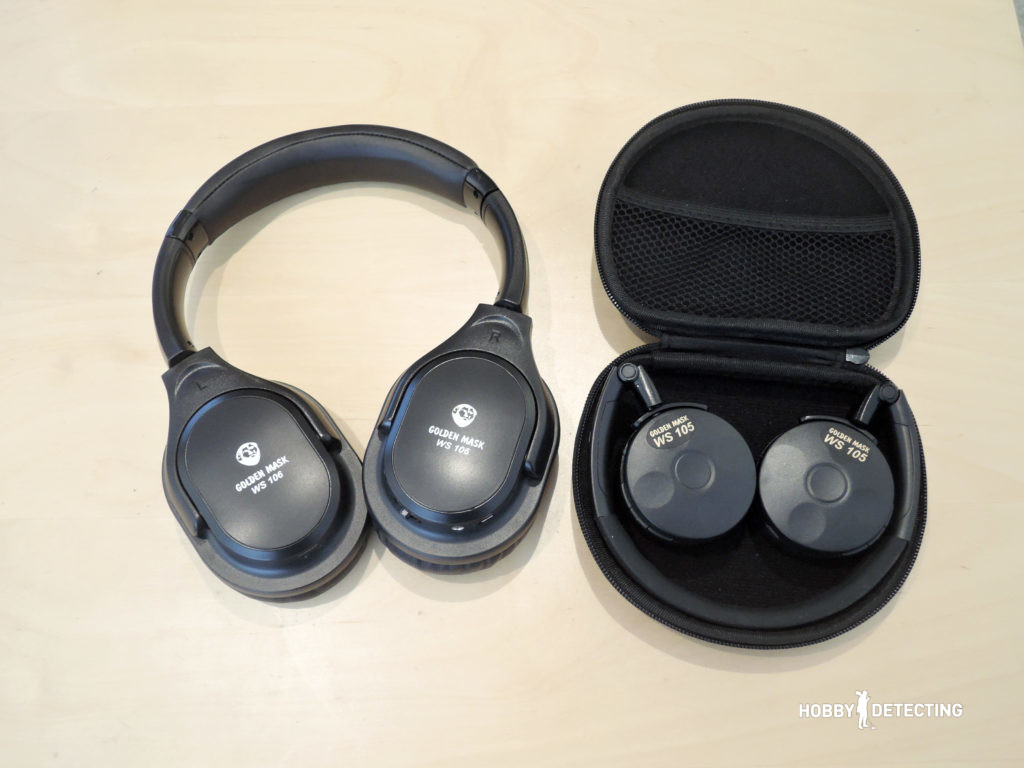 The WS-105 was ideal for summer detecting. They are small, light, well-fitting on the ears, but they do not let you sweat because the ears of an adult person are easily “ventilated” with this headset. The earpiece of the headphones was very strong and did not break even when I was putting it on top of the cap. 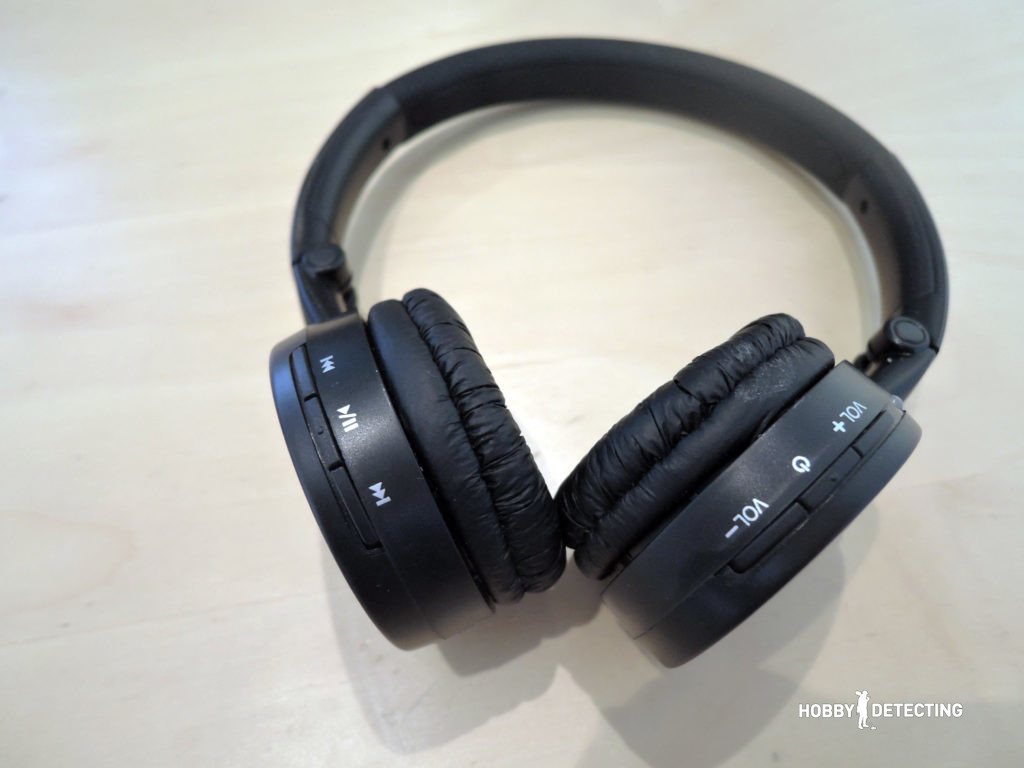 The control buttons were only on the left ear (now in the photo on the right), in the middle there is a button to turn it on, and on the sides the volume control buttons.

This headset also has a mini-USB connector for charging the battery. These headphones have enough battery for a whole day of detecting, although it was declared by the manufacturer that they last for 6 hours. In general, this depends on the volume that you set. I walk with a pretty loud volume to hear the weak signals, and it helps for the wind too! 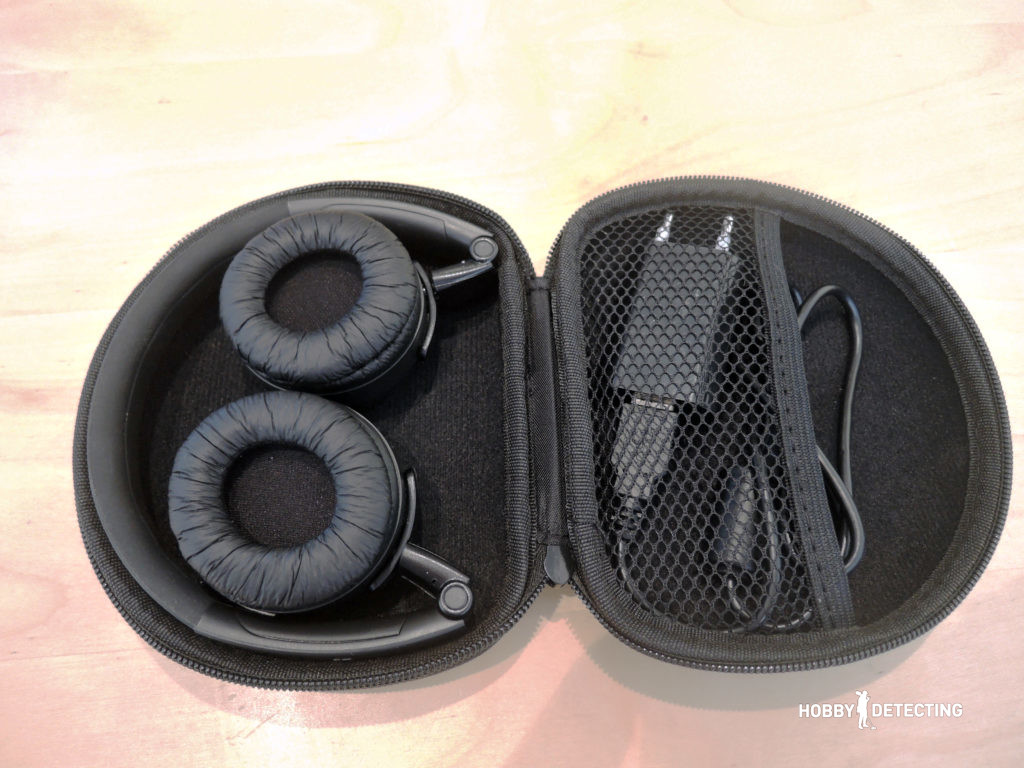 The same box in which the headphones fit, you have the spare pocket – for charging or for a set of batteries. 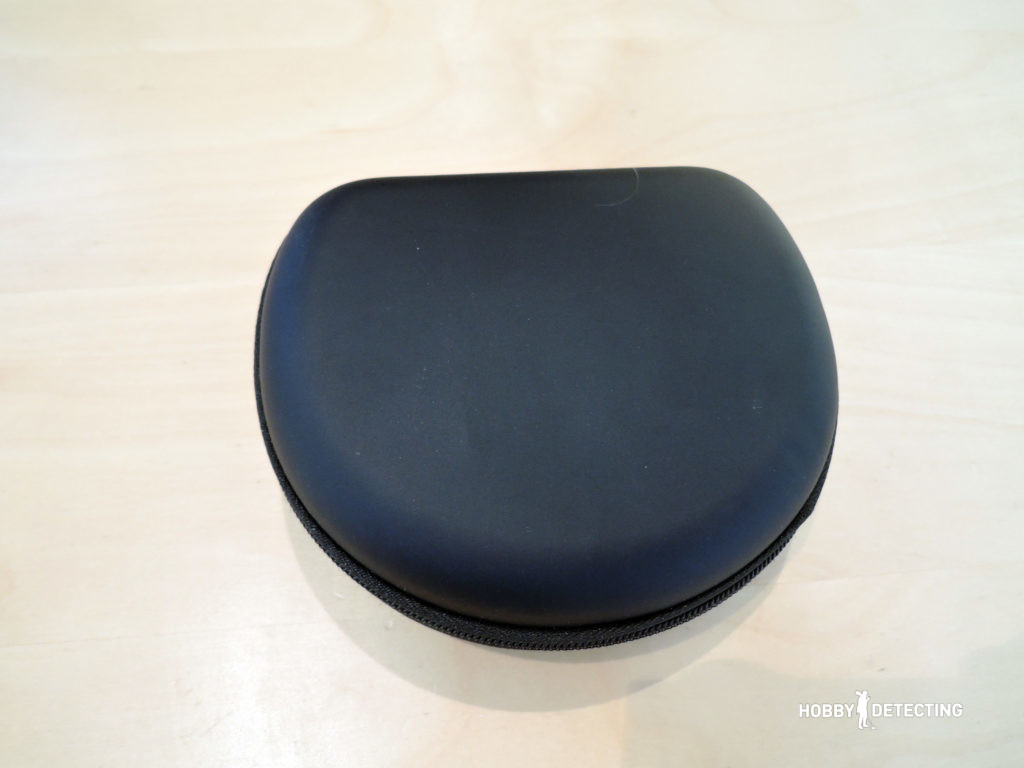 The box itself is very compact and fits in the pocket of a field jacket (parkas of the Bundeswehr, British uniform and so on). But it’s better to store it in the pocket of a backpack because this handbag is useful only for transportation and storage of the headphones.

Now let’s look at the WS-106, the new wireless headphones from Golden Mask: 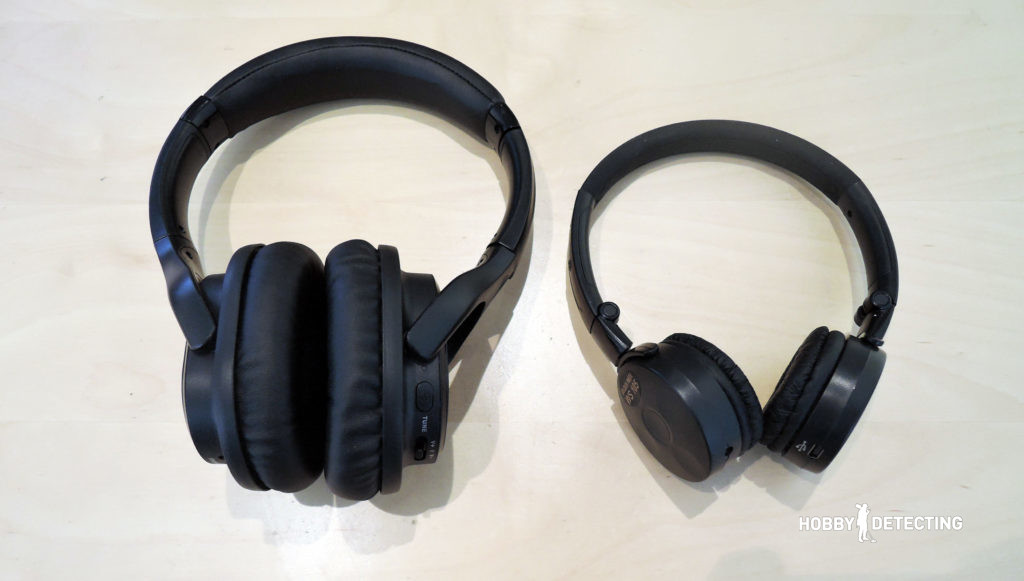 By size, they have become larger than the previous model. This is clearly seen in the photo above! 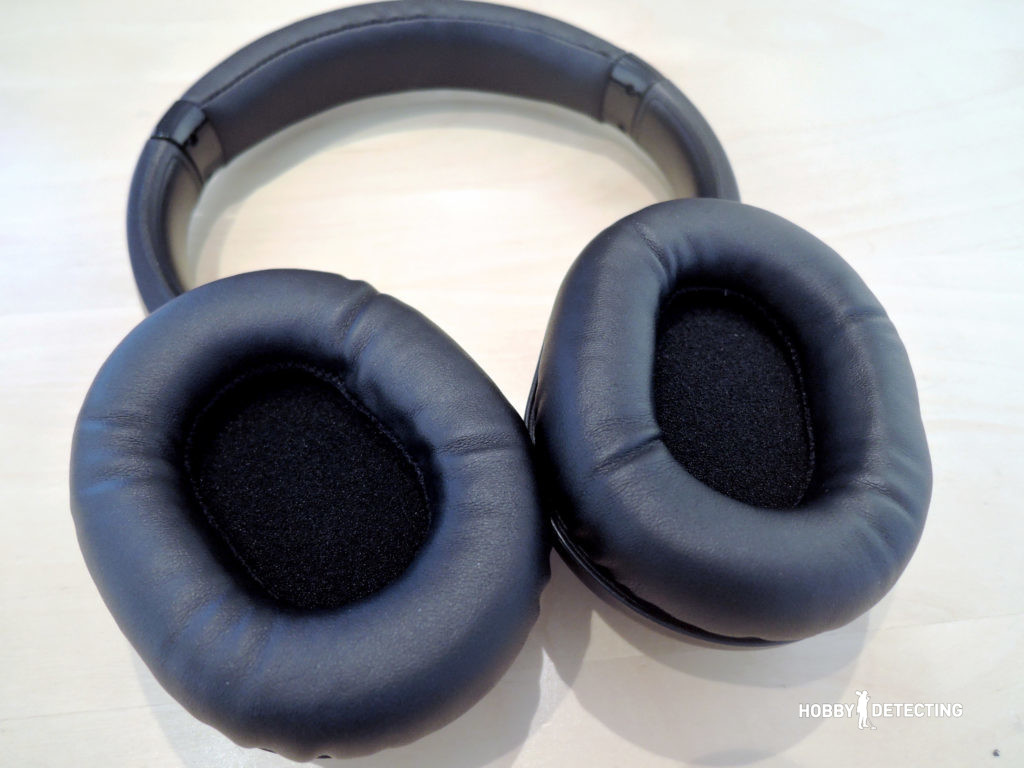 They “grew” larger and now tightly and almost completely fit on the ears, preventing the wind from breaking through. So we got good headphones for detecting in the cool season. 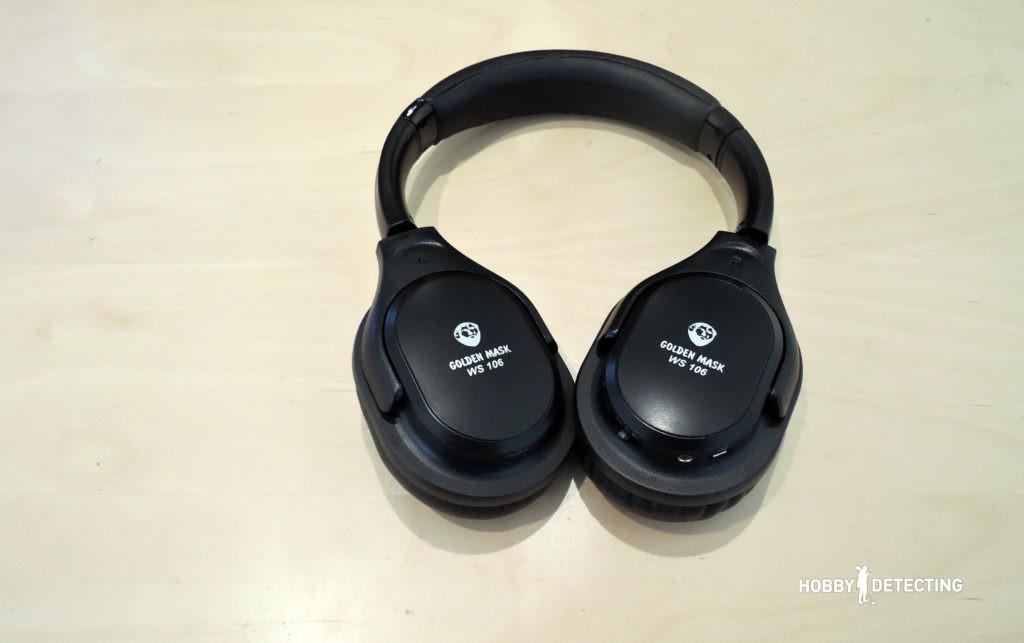 And the design became more pleasant, as for me. The bow is wider and with a seal, for a more comfortable “placement” on the head. 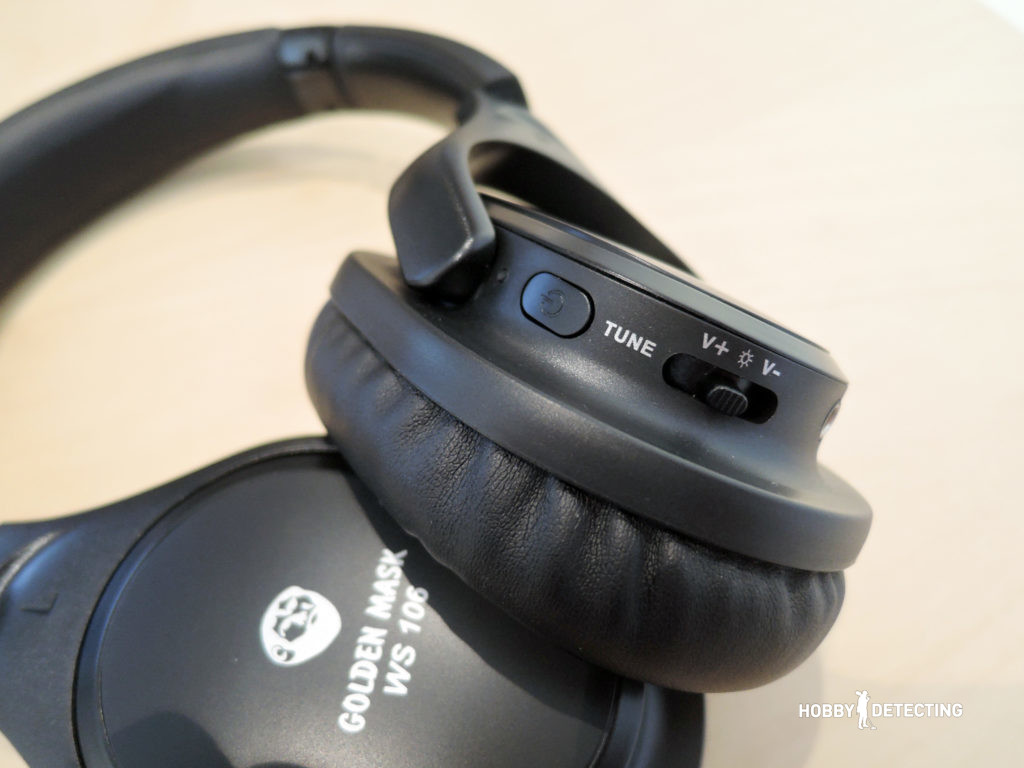 The power button and below the volume button. Everything is controlled simply – we bring the button up, it will become louder, down – it will be quieter. You can do it convenient and quick: a couple of clicks and the volume is set to a comfortable level for you. I appreciated this convenience. ? 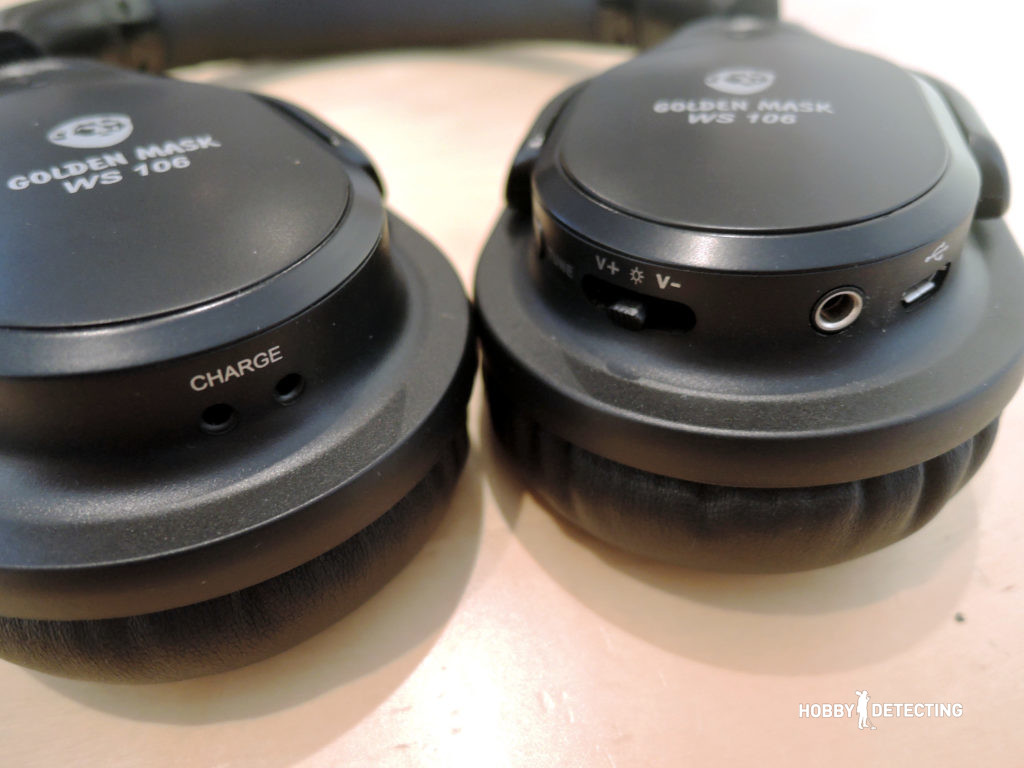 You can see the charging connector, now it’s a micro-USB format and the headphones can be charged from your usual charging Android-smartphone (but not the USB type C!).

The battery capacity has also increased so that the new headphones will be able to work for two detecting days without recharging. This is good news for those who sometimes like to go on an expedition for a few days, or even a week – the headphones can be quickly recharged from either the Power Bank or the car cigarette lighter. An increased term of work is always excellent and a big plus for the manufacturer.

As far as I understand, since 2018, all models of metal detectors from Golden Mask are already equipped with a new model of headphones.

The same technical data of the headphones of both models remained unchanged:

How to connect the Golden Mask headphones to the detector

I’m 100% sure that you do not know this! It turns out that all the Golden Mask headphones can be connected to metal detectors which have a transmitter. Naturally, we are talking about the Golden Mask detectors, for example – Golden Mask 5+, 4 and others.

Honestly, I myself did not know this until recently. But it is true. Now I can use the headphones WS-106 on my Golden Mask 5+ also!

Do you use headphones when detecting? If so, what model? Tell us in the comments!