China is ahead of the rest. It seems like they love to take and copy something expensive, and they are pretty good at it too! But one thing will remain the same: the quality will be very low and very far from the original. But maybe there is no differences between the same phones that are manufactured in China, but highly professional instruments like metal detectors, the Chinese still do not know how to copy properly, and they will need some years to learn it. They have no understanding of the technologies and relevant skills, and there is no production at the proper level. ?Because if you see a device and doubt about its originality – it is better to double-check everything several times, this can save you a lot of money and nerves. Buying cheap stuff is not always beneficial, it mostly leads to an extra headache and bitter tears when it first breaks.

I have some interesting information that was sent to us by a reader from the Middle East. Minelab has its own office over there and they are actively supplying different African countries with their technology – detectors to find native gold. Naturally, the Chinese also wants to get their part of the profit by making fakes, which is what happens. 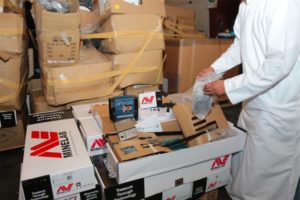 It maybe looks like a Minelab, but this is not. Some cheap Chinese fakes. It is a big bunch of fakes having the value of $ 9 million, yes, yes, nine million dollars, destroyed in the Middle East by representatives of the Middle East office of the Australian company Minelab. It is terrible to look at, but it’s true! I do not know, maybe they could at least save the boxes, to reduced the cost of the production a bit.? 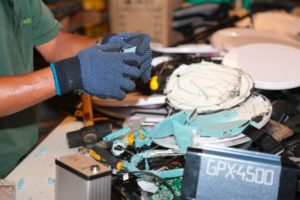 Destroyed by all available means, in the photo we even see a hammer. Very efficient probably!

In general, even at the GPX-4500 inscriptions you can see that it is fake.

Comrades! Do not fall for fakes, the benefits in buying a fake is about zero, there will only be problems. ?It’s like buying a cheap car, and fastening a Ferrari logo on it and saying it is the real thing.

So stay alert when buying detectorts, and good luck at the end of the season!