Breaking The Record For My Oldest Coin Ever Two Times In One Day! (Digger’s Story, Photos+)

Detecting with a metal detector is an interesting hobby, but also very different from country to country, it turns out. In the place where I live, there isn’t too much interesting history and the people “back in the days” were very poor. Because of this, people obviously didn’t have too many coins to lose (and for me to find), and we detectorists even have a joke among us, that coins were carried on threads and therefore they are very rare to find. So if you go metal detecting over here and find maybe one coin from the late 1800s, I would’ve said that as a very good day.

So obviously I was very happy when a friend of mine invited me over to his country, among other interesting things, to go on a metal detecting trip and find much older coins than I have ever found where I live. So without any further hesitation, I packed my bag and my Fisher F75 and went off detecting.

Already over at his place, we started looking at old maps and planning where we would go. There were so many possibilities of potential places for detecting that just the thought of all the coins that could lay under the ground made me impatient to get there.

Getting up early in the morning when it still is dark outside isn’t always as easy when you’ve had a good night on the day before, but it is necessary to do so, in order to get to the place of destination and get the most out of the day. 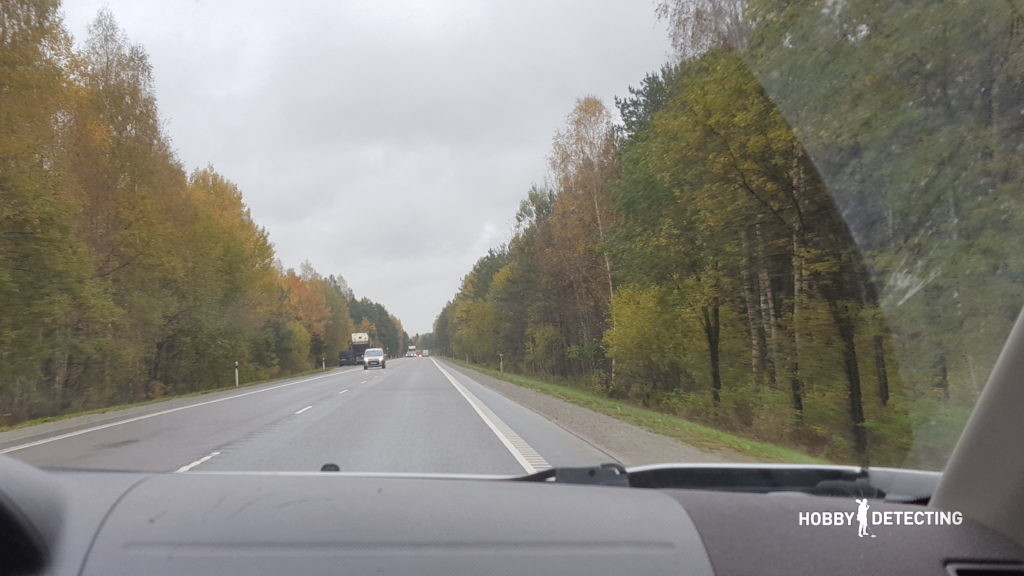 After a little coffee and a solid breakfast, we went off with high expectations for the day. By the way, breakfast is the most important meal of the day, especially when you have a whole day of detecting in front of you!

Upon arrival at our destination, we chose a place to park the car and started unpacking our detectors. I was genuinely considering if I should go for the headset or not because there had been some light rain in the morning and more to come if we were to believe the weather report. Finally, I decided to go without the headset in fear of damaging it, and I would not regret that decision.

But before I get to the detecting itself, let me give you a little information about the place we detected:
Our chosen destination was a little village on the outskirts of the city. The first reported sightings of this village are from the middle of the 13th century, but it may be even older than that. The village has a small church, and for you to really understand how little it is I will say that the population of this old village is about 200 people, even though there is a school and even a store there. So, we picked a seemingly good field in the outskirts of the village and hoped for the best. 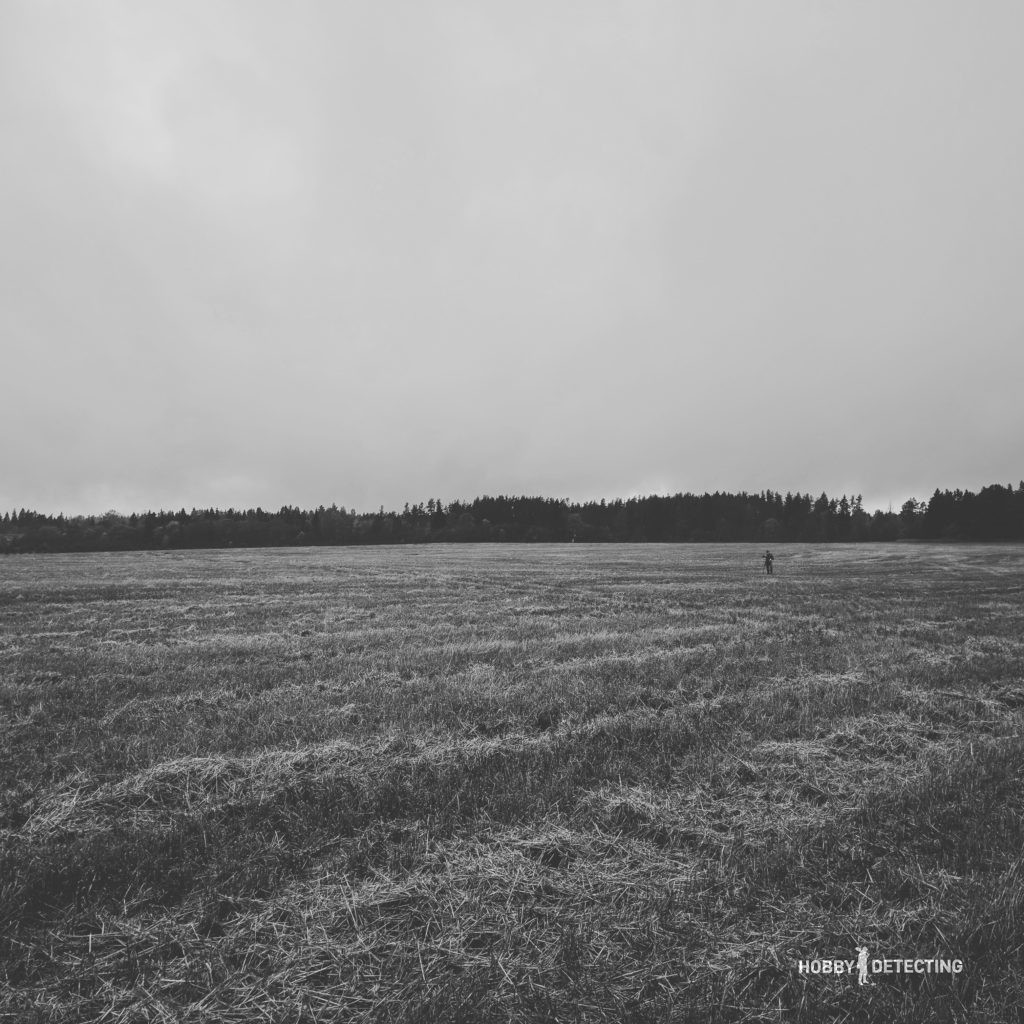 We started detecting and my first interesting find appeared only after a few minutes; an interesting toy soldier made out of lead (or what is rest of it). Even though this find isn’t very valuable or especially old, I really liked it. 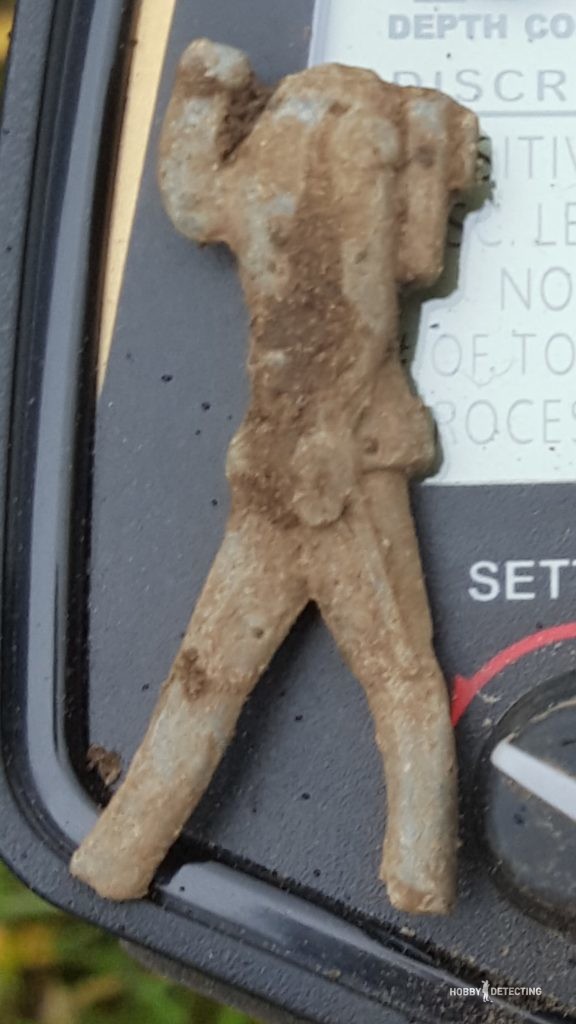 My next find, however, was a little more interesting. I’m not sure if I remember the exact VDI of this signal, but i remember it to be very stable and about around 65-70 on my Fisher F75. This was the first really good signal I got that day and the find was in accordance. 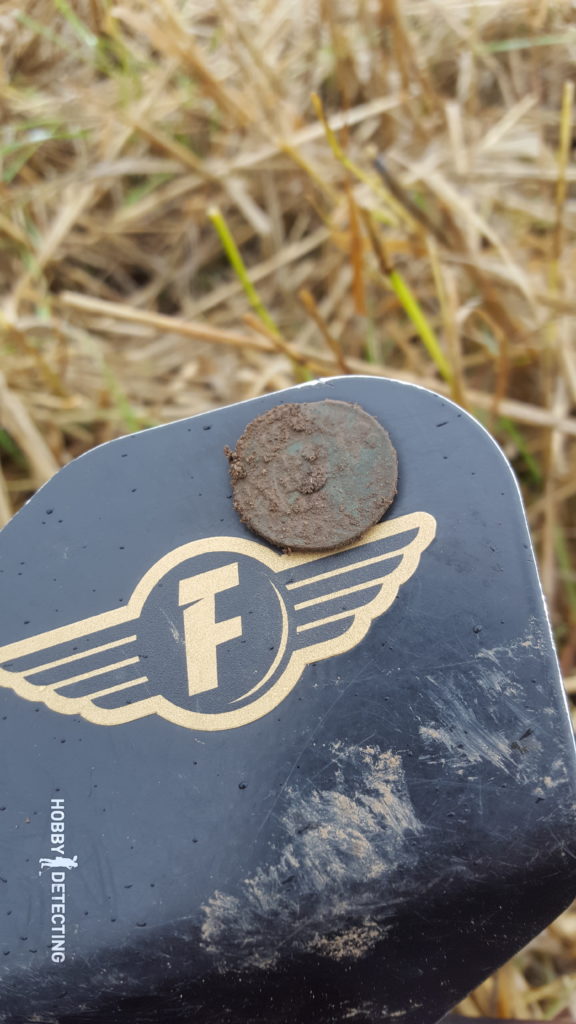 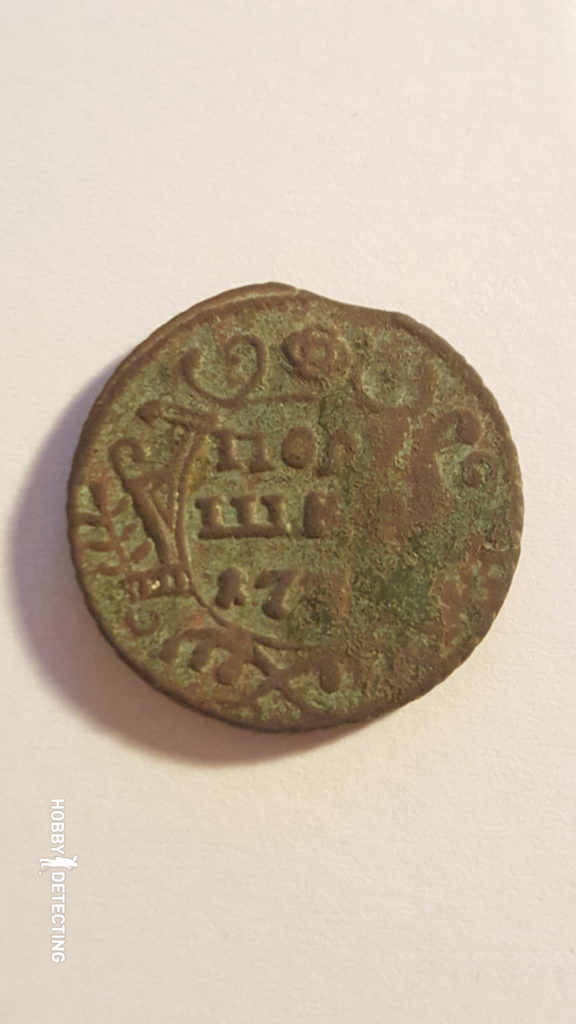 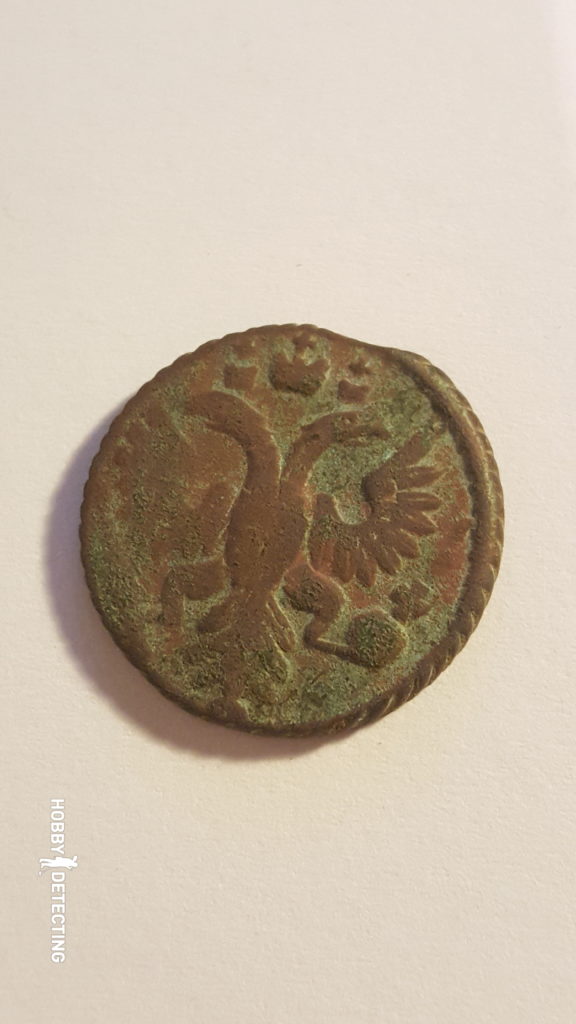 This was a “Polushka” coin from 1732 with a beautiful eagle on the reverse, not bad at all and a very good start of the day!

My next signal I remember was at around 65 and also very stable, but unfortunately, it wasn’t a coin. It was an old button, but that is not bad either because I enjoy finding them as well. After taking out the button from the hole, I got another signal literally ten centimeters away and another one by that. It ended in me finding three or four buttons not far from each other, and also an old buckle. 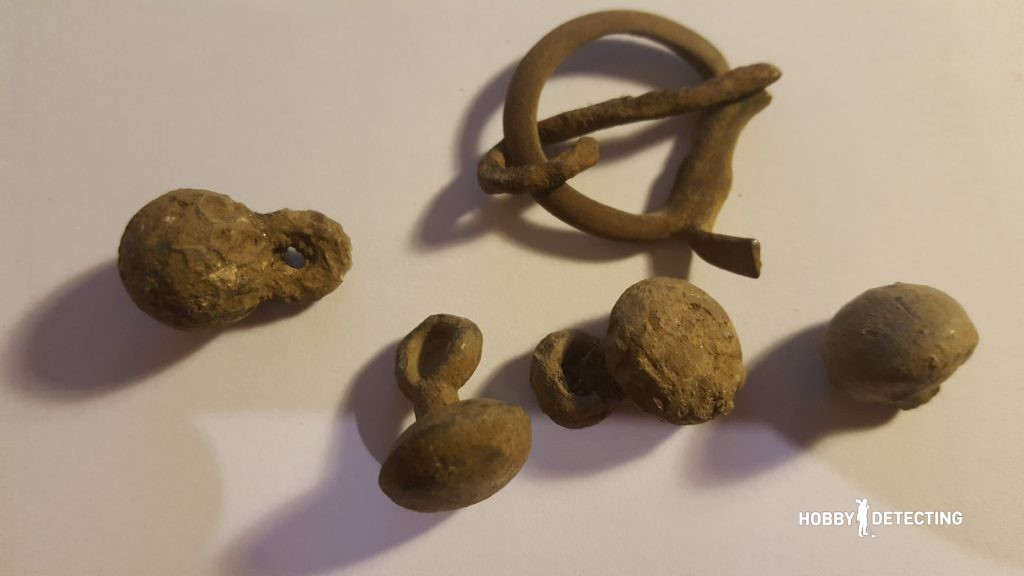 My next noticeable find was a Russian “1 Kopeika” from 1859 with a really beautiful monogram of Alexander the Second on the back of the coin, another amazing find! 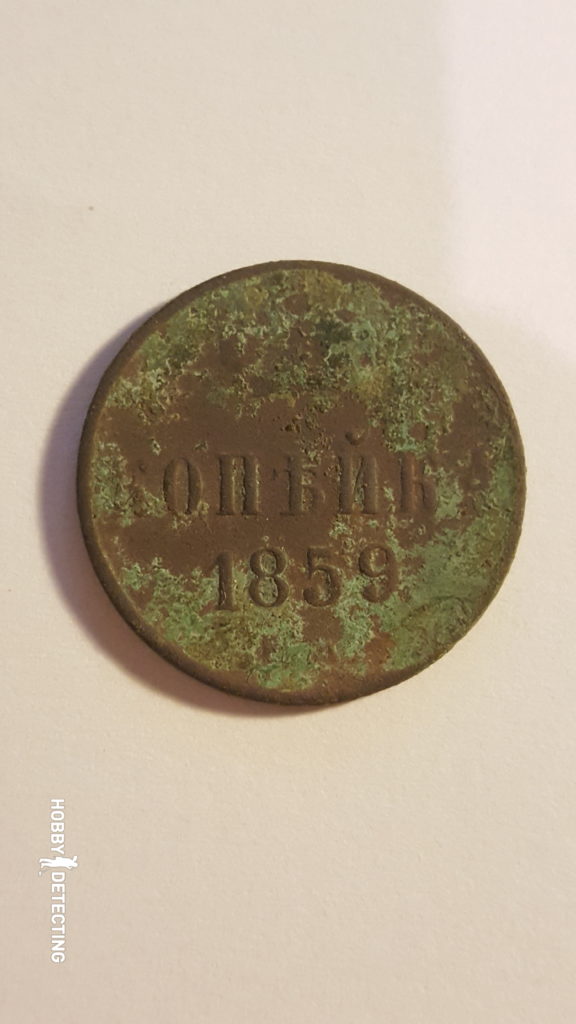 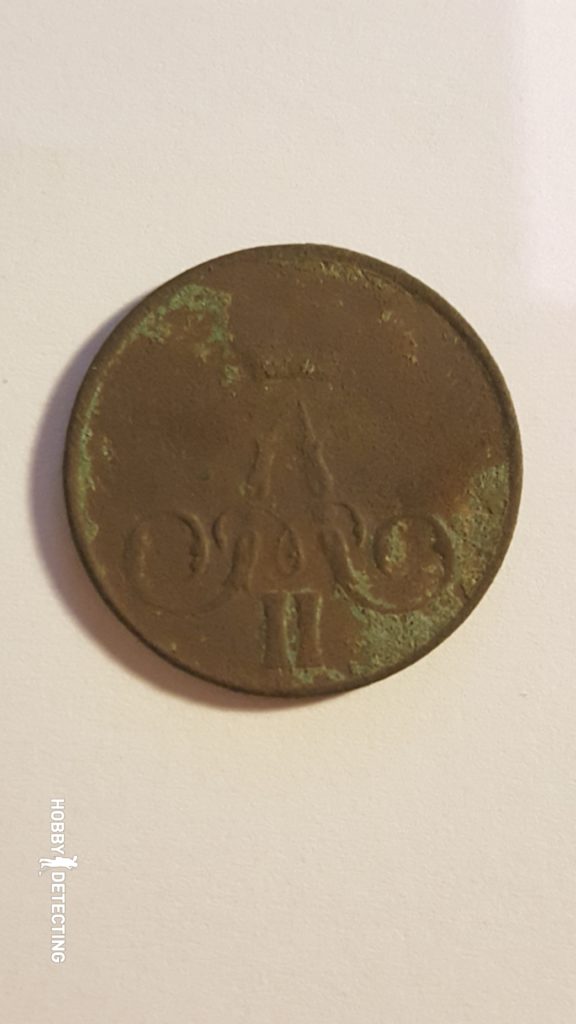 After finding some more buttons and other interesting objects, I stumbled across an unusual find. I don’t quite remember the signal, only that it showed up as 6″ deep in the pinpoint mode. I started digging, and the signal turned out to be actually really deep, probably the deepest object I dug that day. When I first dug out the object, I thought for the first couple of seconds that it was just another piece of junk brass, but then I realized what it was. 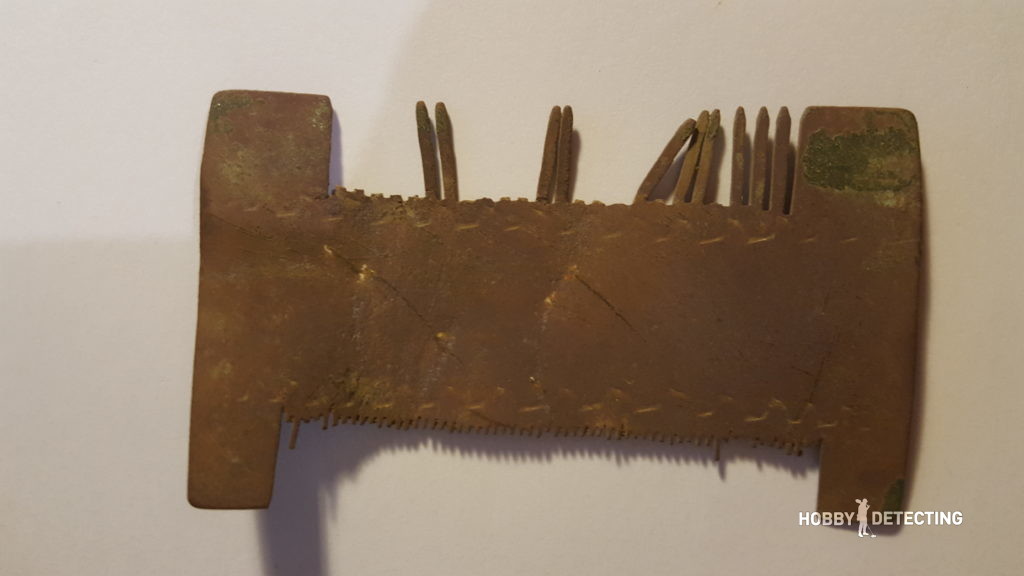 It was a really old brass comb, what an unusual find! Too bad that most of the “teeth” on the comb was broken off, but still an interesting find for me. 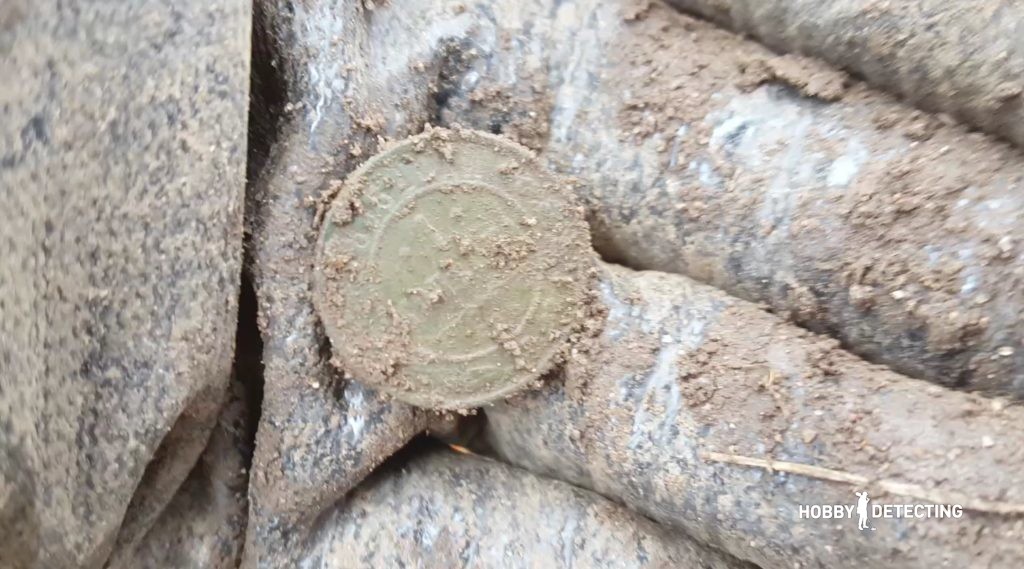 I was very satisfied with this coin because I really like the design on it, a very beautiful eagle. What do you think of it? 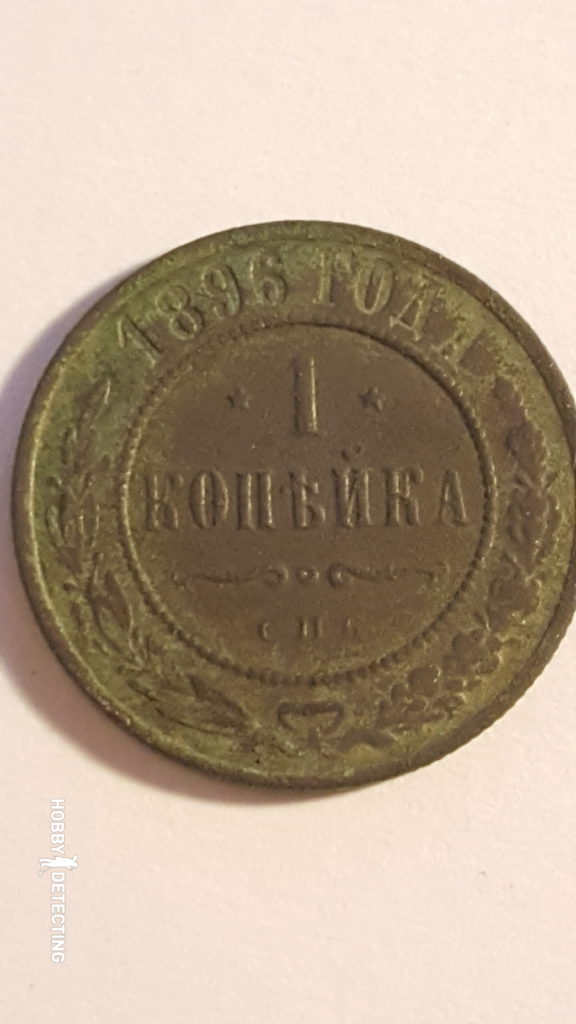 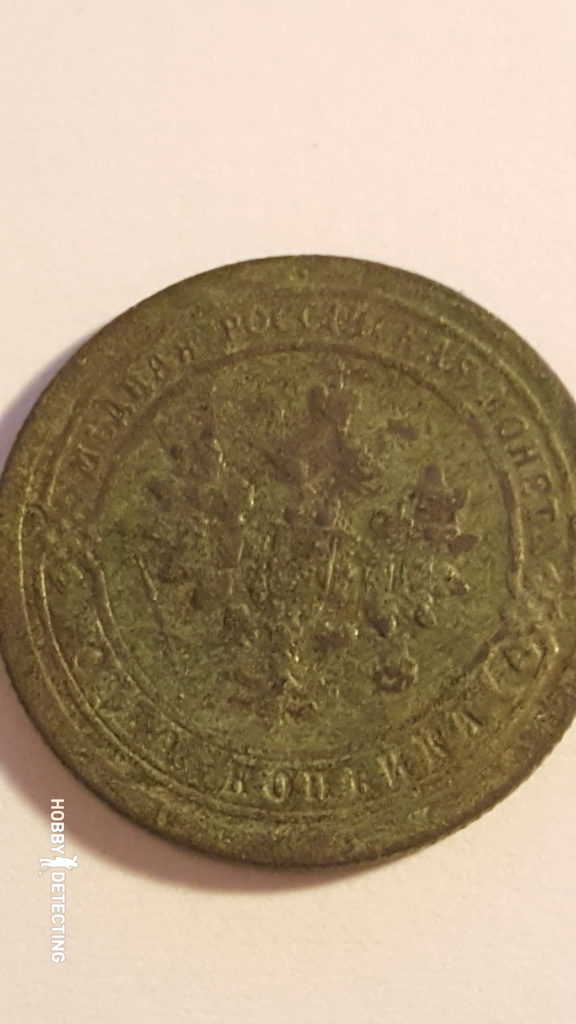 After that find, my detector remained quiet for a long time and therefore I started walking in another direction. Suddenly my detector hit a solid signal with a VDI of 87-88 and I got really excited. I started digging the approximate location of the find and without even using my pinpointer, I saw the coin. I immediately called my friend to take a look because he was just a few meters from me. We picked up the coin and looked at it; 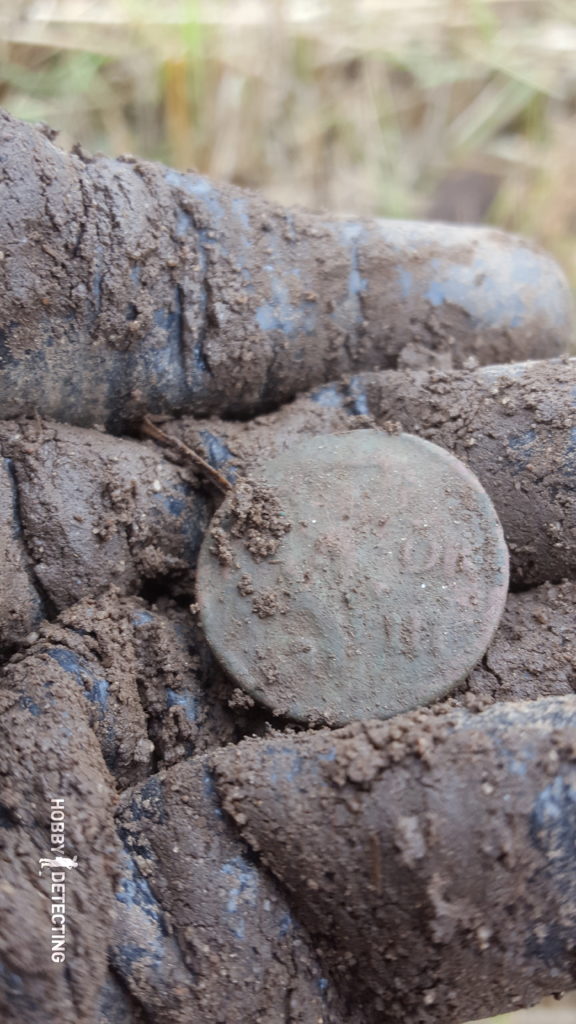 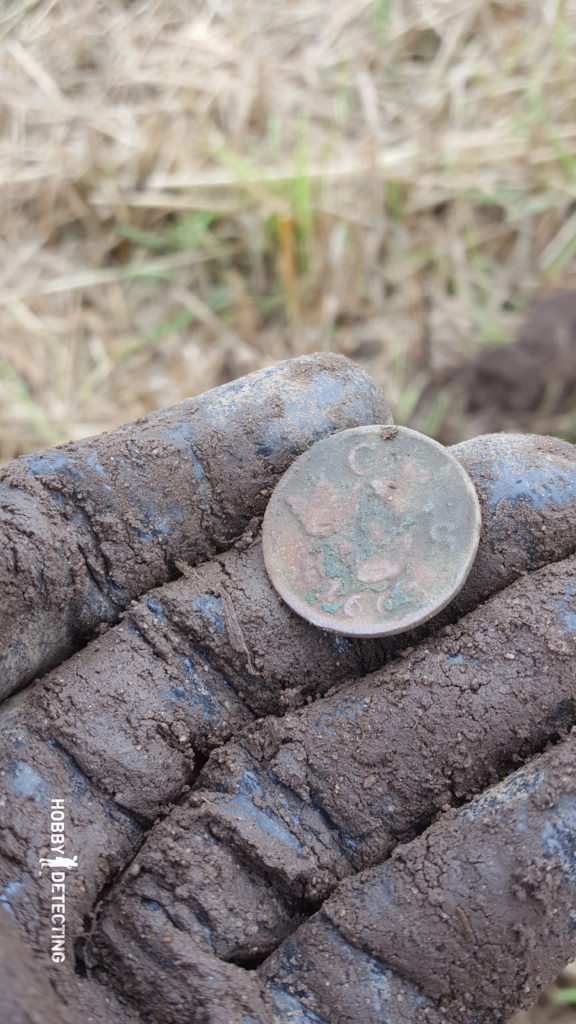 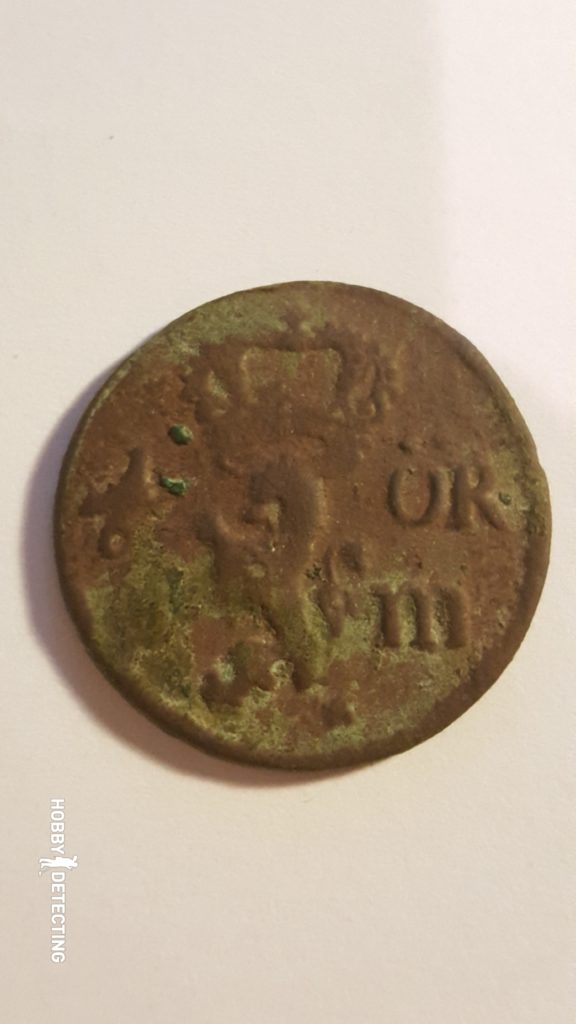 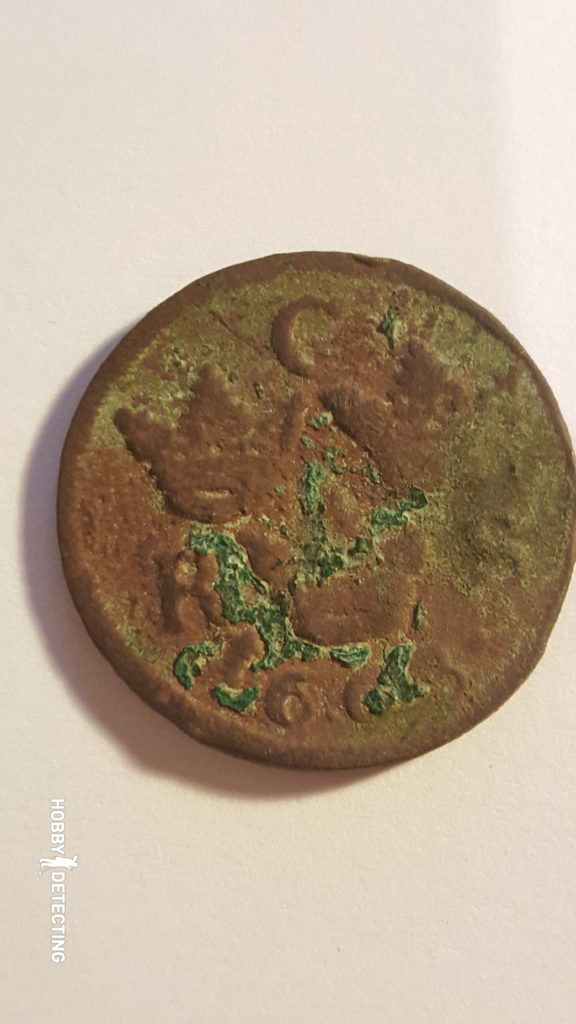 This beat my previous record of my oldest coin by one year, which was a German silver coin from 1664, read about that find here!

After finding a couple of more interesting finds, we decided that it was beginning to get close to lunchtime, and we decided to slowly move back to the car. Just as we were on our way back, I hit a signal. The signal had a VDI of around 50, and it was not deep at all, it sounded like a surface find. I sat down on my knees, removed the upper layer of hay, and there it was. 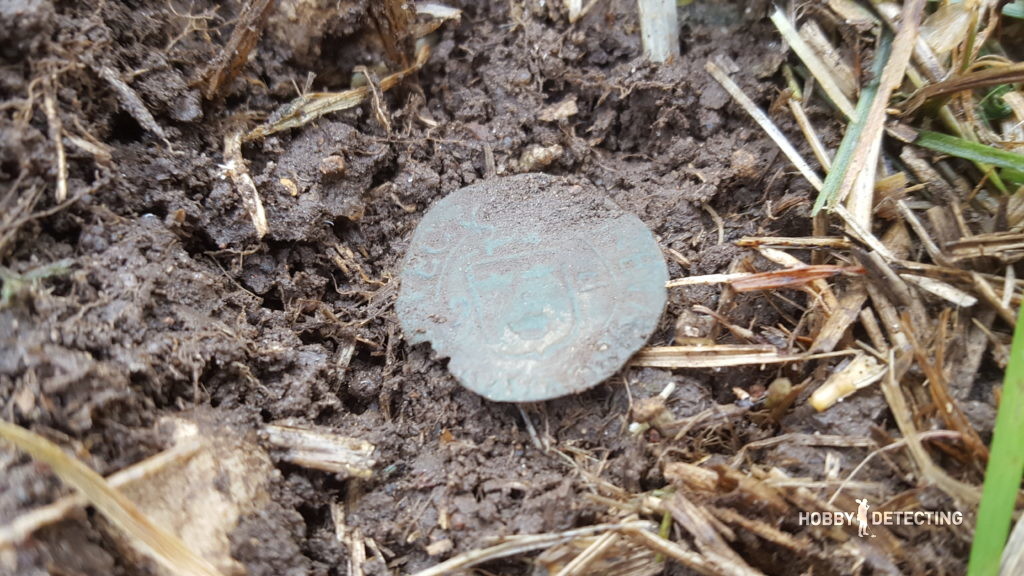 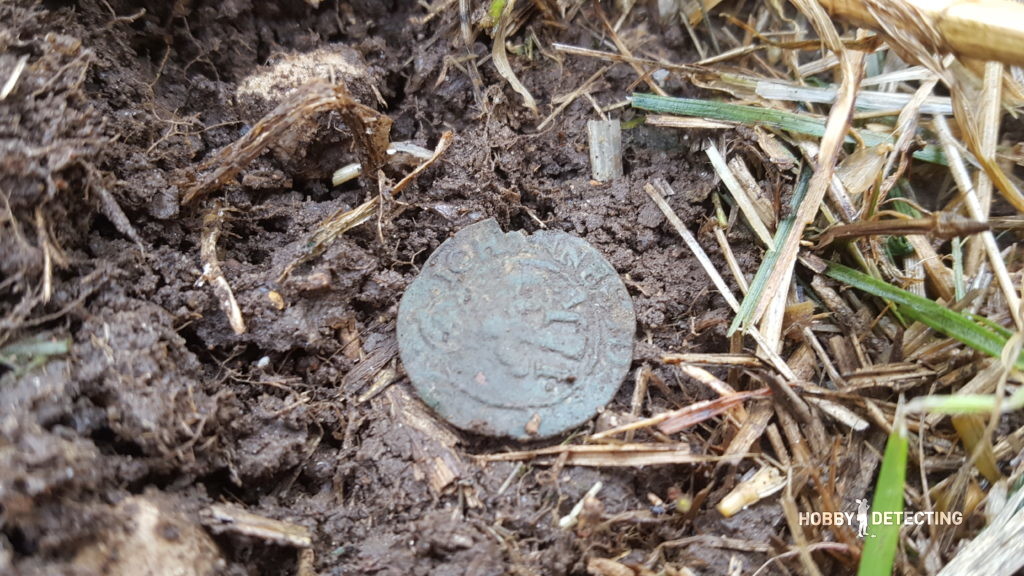 I couldn’t believe it! My oldest coin that I have ever found turned out to be one of my shallowest, right there on the surface. This coin is also Swedish, it is a 1/2 Öre from 1592, just imagine my happiness! This coin is a silver coin, but unfortunately, this one had already turned green, but you can still see a little silver shining through. 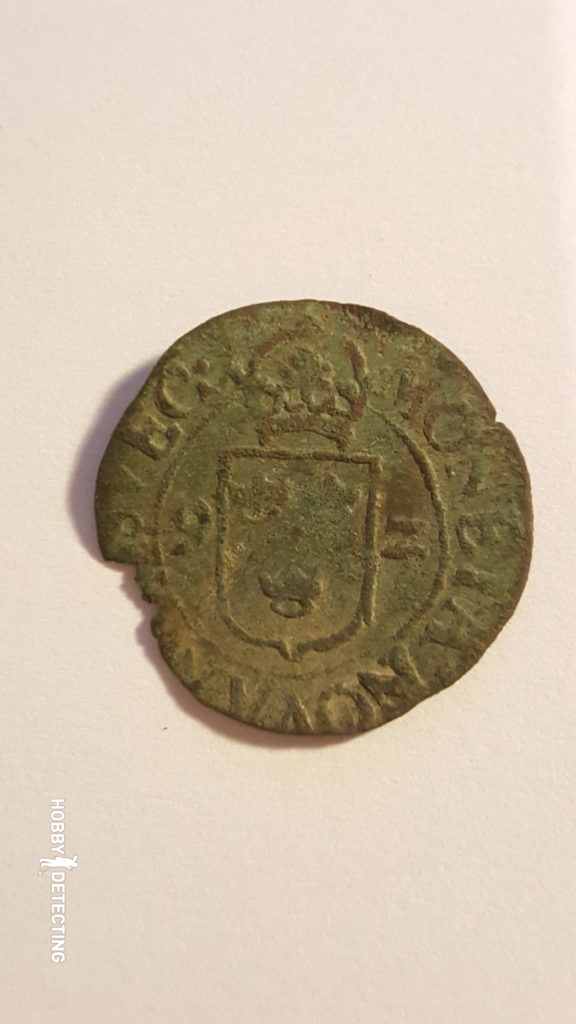 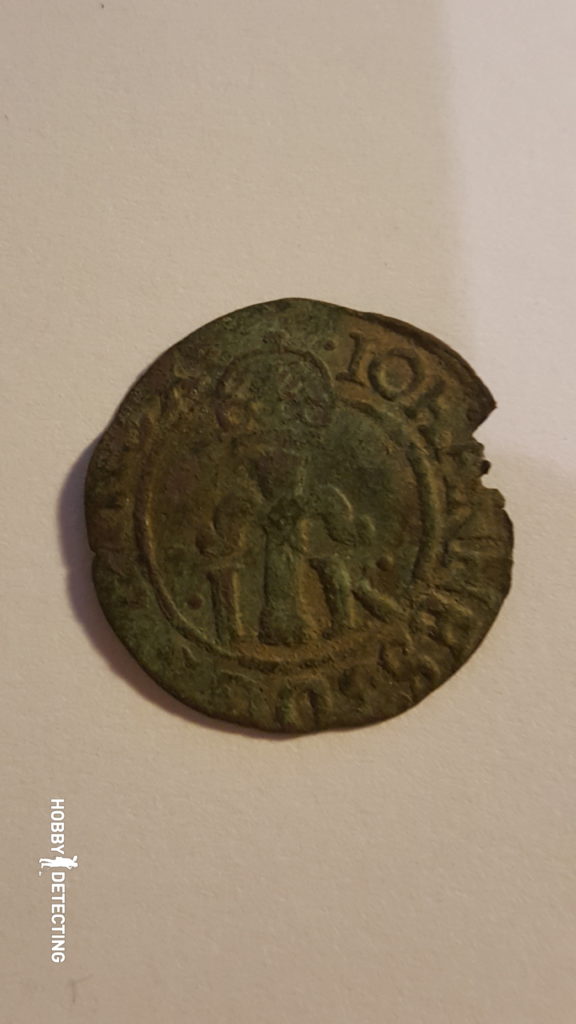 Local archeologists were of course informed about our finds. 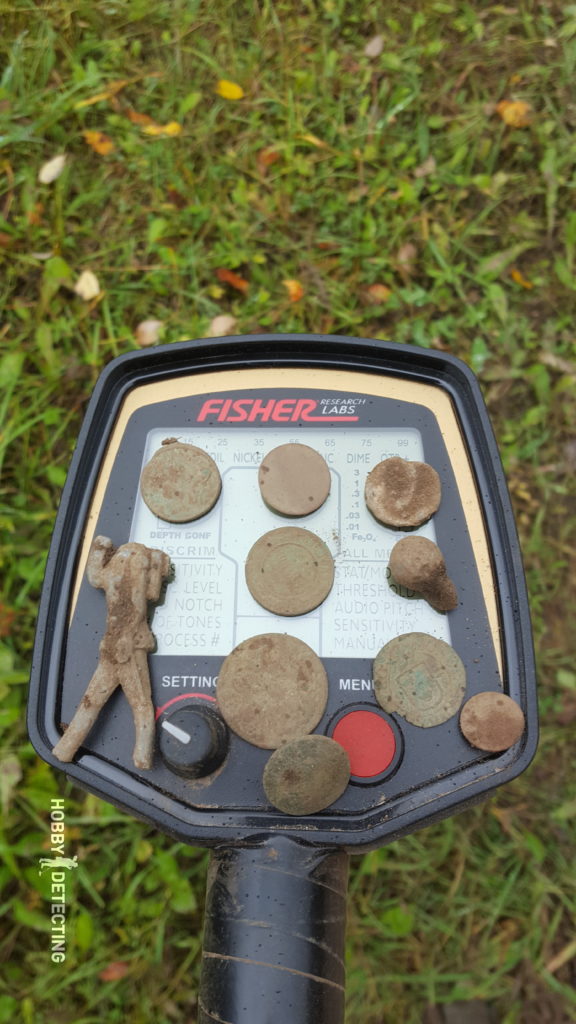 In total, I ended up very happy with our result and I think that it was definitely worth it.