When you want to buy a metal detector, you may simply get lost from all the varieties of models and manufacturers, not knowing how they all differ from each other. But when you want to get a detector for your child, then there is nothing to choose. But you want to take a reliable, operable, understandable, interesting detector. This detector, in my opinion, is the Bounty Hunter Junior Target I. D. This detector is designed by Americans specifically for children.

The Bounty Hunter Junior is not the first children’s metal detector, which has been in my hands. But that was Chinese detectors, which are mostly copies. Therefore, I have some experience with metal detectors for children, based on which I will objectively tell and show why Junior Target I. D will be the best detector in its class.

The Kit
Bounty Hunter Junior T. I. D. Metal Detector comes packaged in a bright box – a child will be happy. I immediately noticed the words “super fun”, which promises fun with what’s inside this cardboard box. 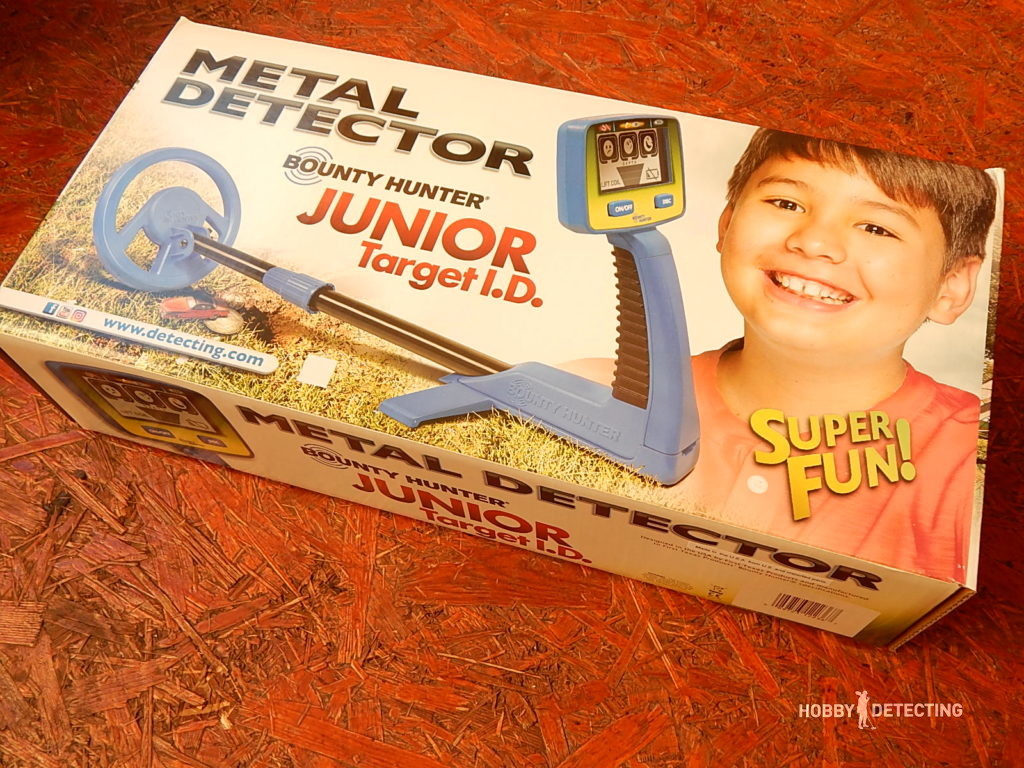 On the box from the diametrically opposite side you can see the detector itself and familiarize with some its functions. 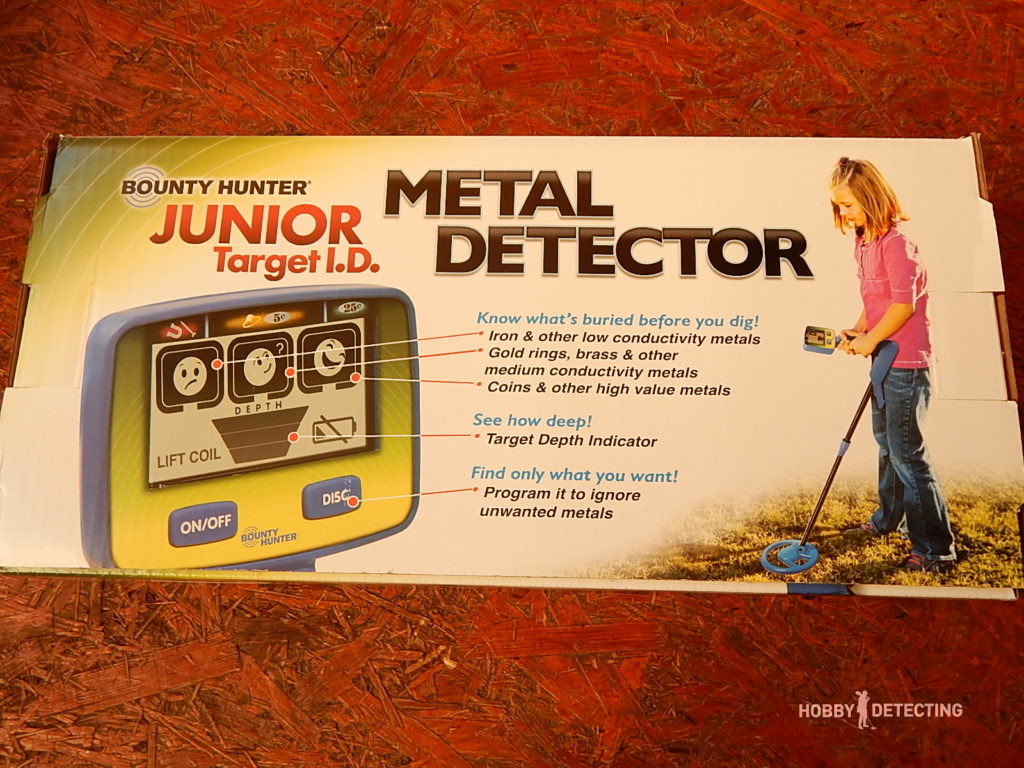 And now it’s time to open the box. Inside there is the metal detector, a lot of literature and two interesting things – a magnifying glass and scoop for detecting, the handle of which has the familiar inscription FISKARS. 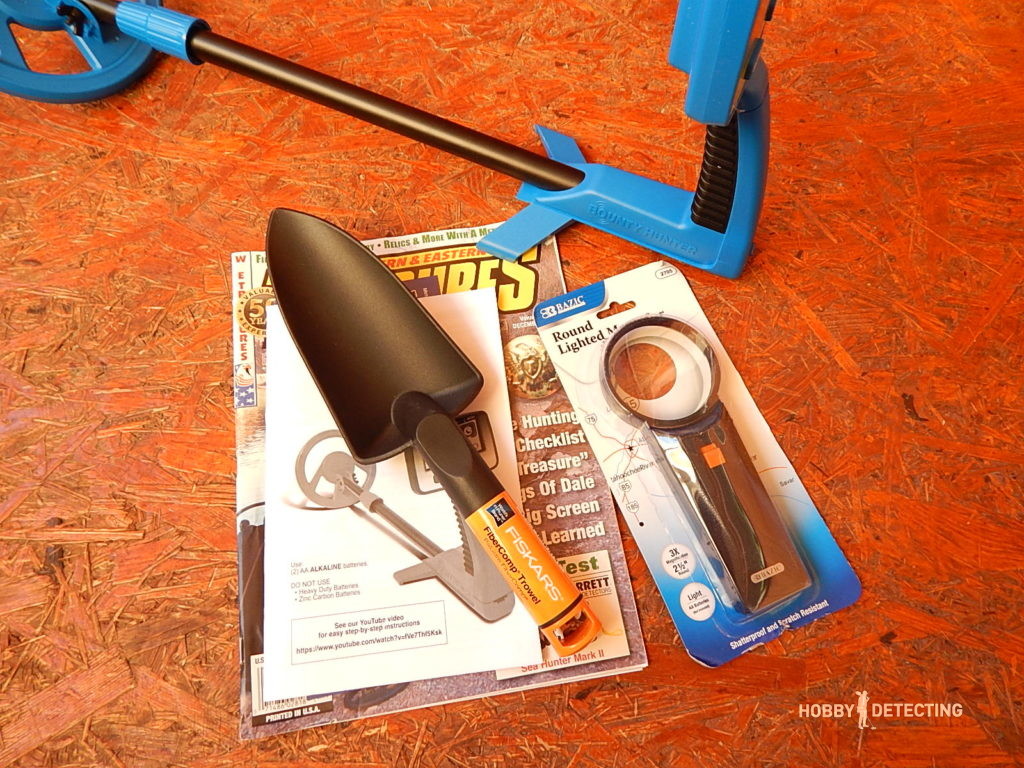 Interestingly, Junior T. I. D. does not require any assembly. You only need to adjust the rod for a specific young operator to start detecting, because 2 AA batteries are initially installed. 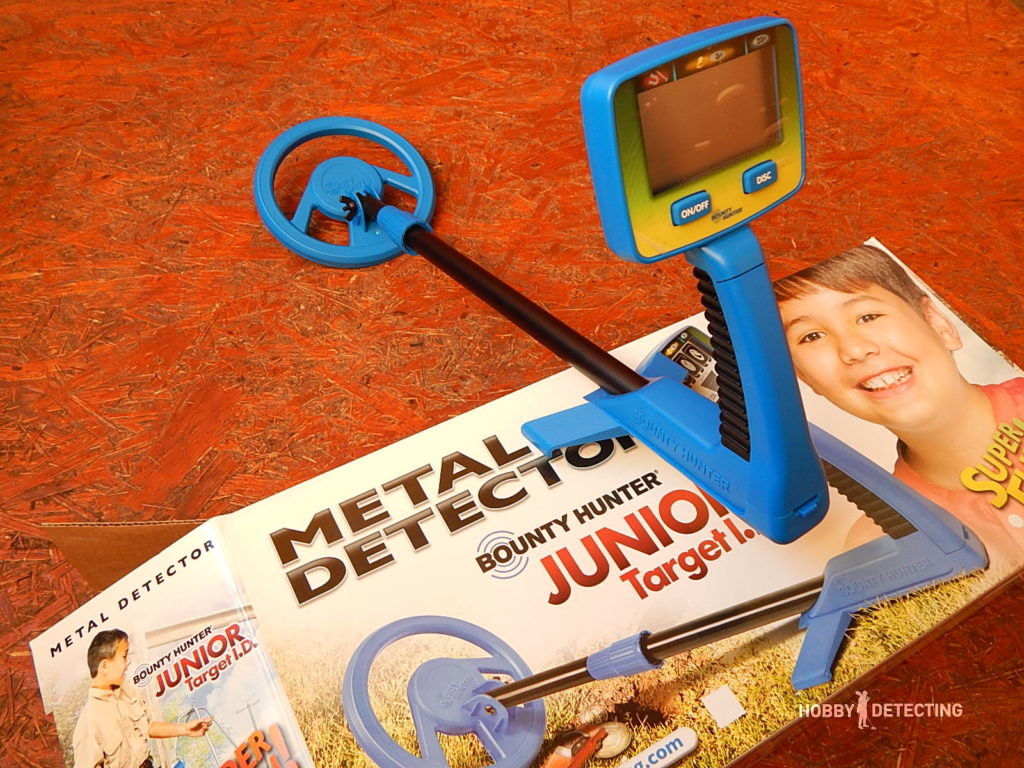 The battery compartment of the Junior is in the handle, which is covered and tightly and securely sits in its place. 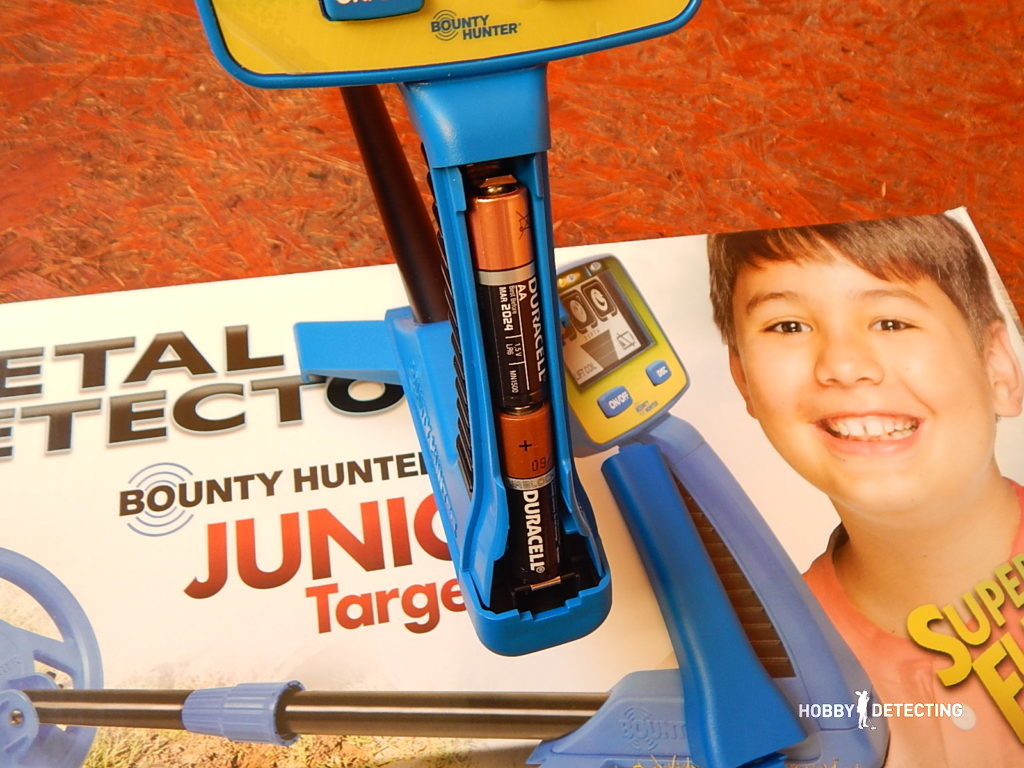 What you notice immediately, when you take the Junior Target I. D. – the good quality of the plastic and of the whole detector. After seeing the detector there is a certain confidence that it will not be quickly broken.

Ergonomics
The Bounty Hunter Junior is designed to be very user friendly to its young master. It sits comfortably in the hand while the grip is reliable. 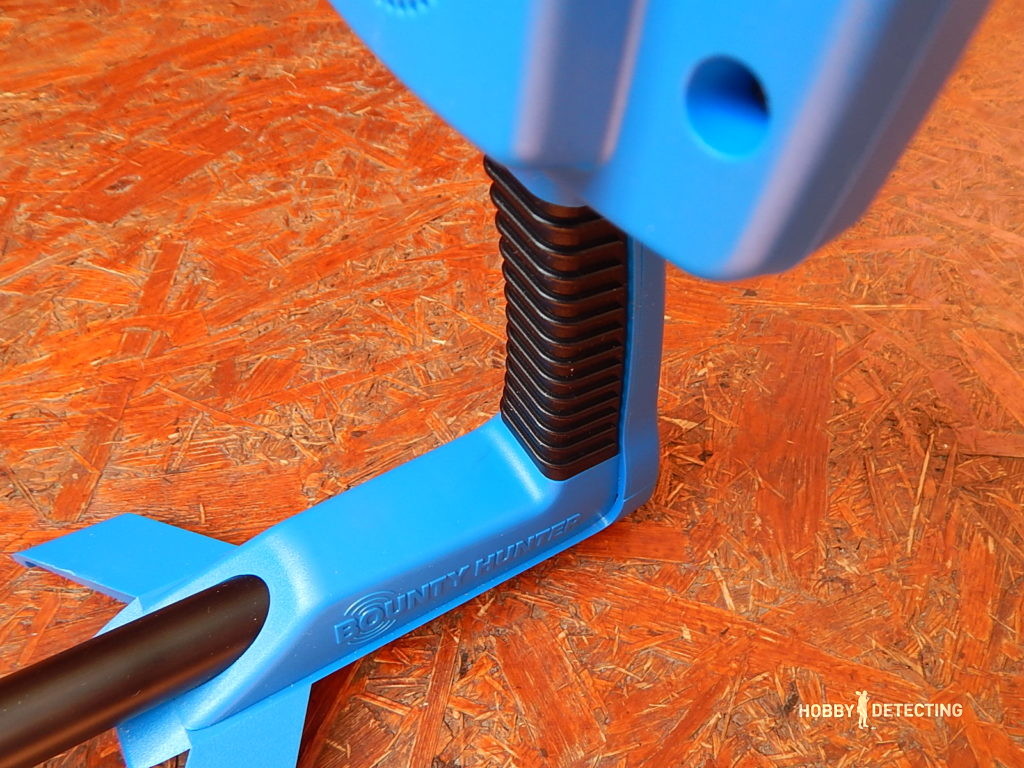 You can comfortably search with one hand without the elbow lock on the Junior T. I. D. Its weight – 540 grams! This is the lightest display detector that I have ever held in my hands.
When put down, the Junior relies on the ground on four points: the coil, the plastic case and two supports. On different bumps the detector will stand confidently, without “rolling over”. 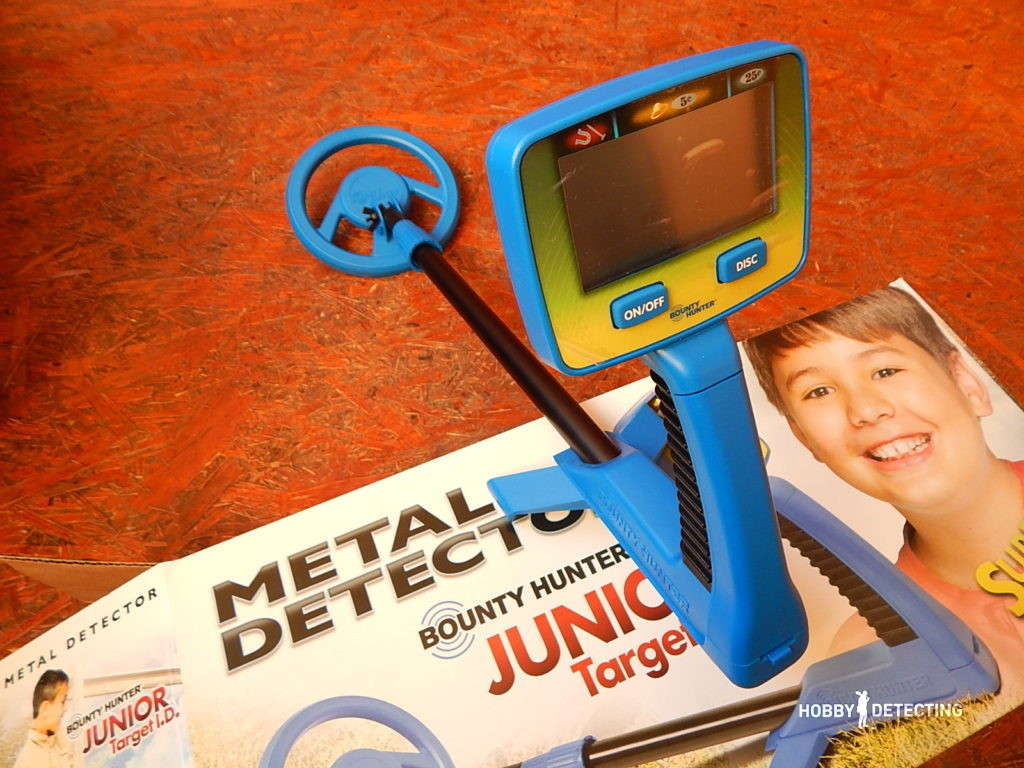 The wire coil is hidden inside the telescopic rod. The metal rod that won’t allow the detector to break without a proper effort.

But how worried some experts metal detecting may be by the following information, I don’t know… Can you believe that the bolt for fastening of the coil is made of metal? Some will believe that this can affect its magnetic field. Why this is not so, I will not explain now, but this is nothing to worry about.
On the rear panel of the detector there is a speaker. 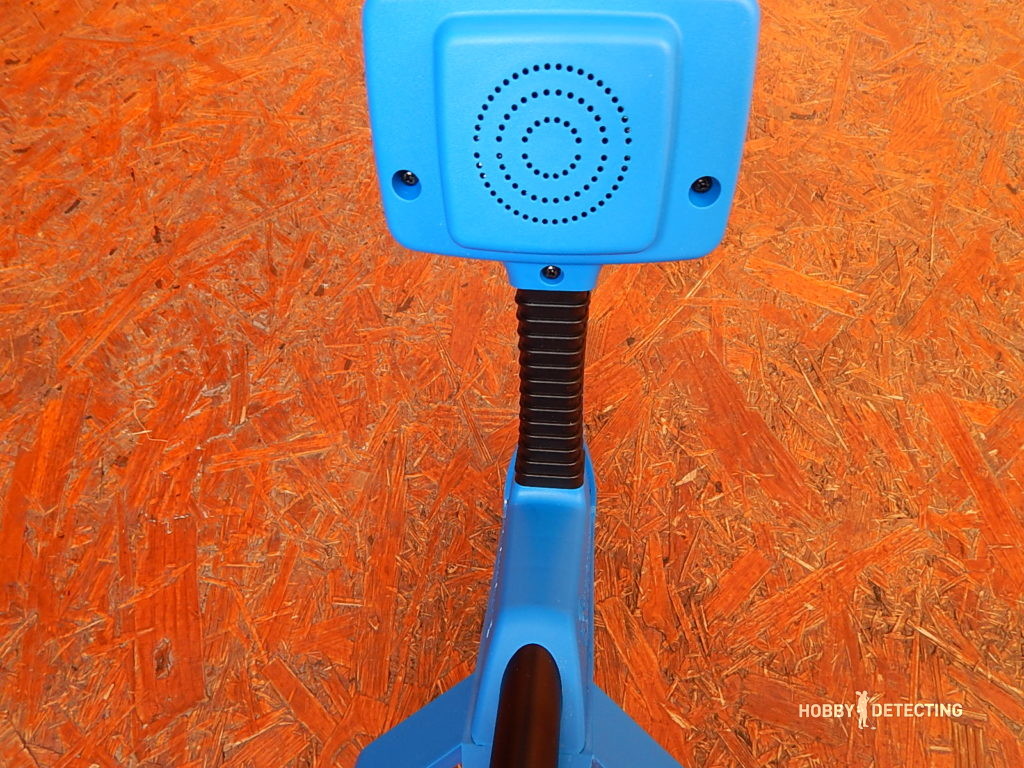 The detector has no volume control, and I think that a detector for a child like this will not need it. But what it will need is a loud response that will inform parents where their child is detecting. And probably therefore, the speaker is of a large-size, it covers the entire back wall.
The display at the Junior T. I. D. is sure to appeal to young treasure hunters. After all, it displays a small image in which everything is easy explained. 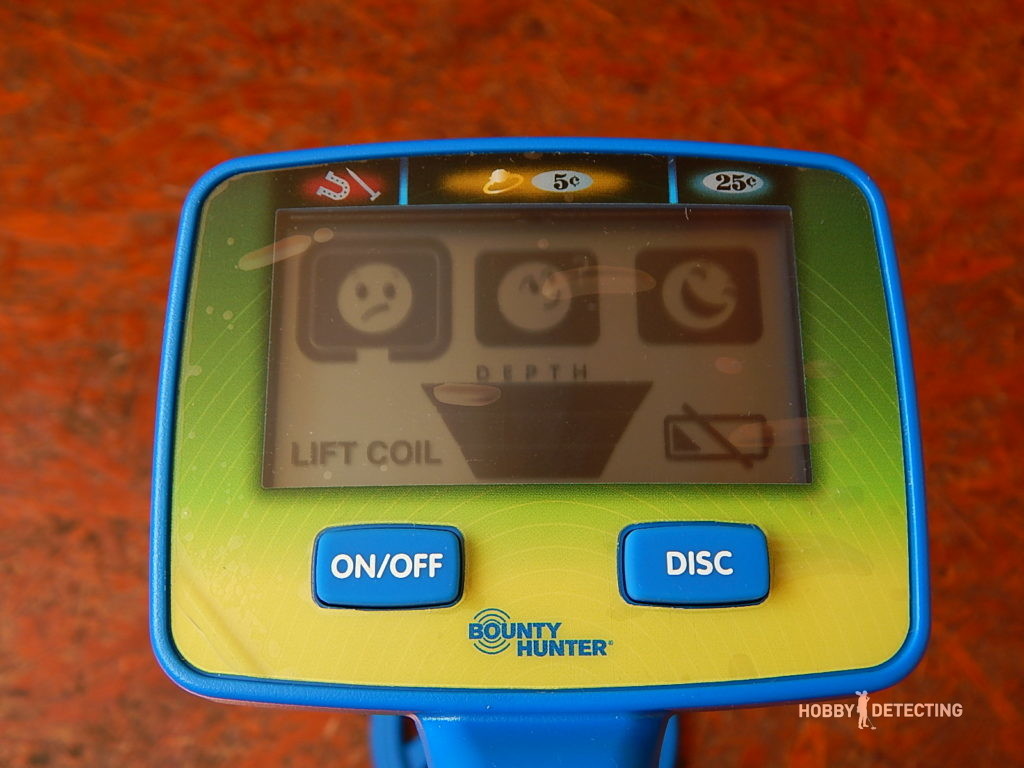 The LCD screen itself is located deep in the housing, and installed from above is a protective film. So, if the child wants to rub something into the screen, don’t be afraid that it will damage the LCD.
Managing and configuring the detector requires only two buttons. Their purpose I will tell about in detail in the next section.

Setting up the metal detector
In the previous section I wrote about the ergonomics of the screen on the Bounty Hunter Junior T. I. D., and now I will tell you about its functionality.
The metal I. Ds on the detector is divided into three categories. On the control panel at the top there are painted prototypes of the detected target.
After switching the detector on, the screen shows 3 empty squares, where the middle is visible with the inscription “DEPTH”. 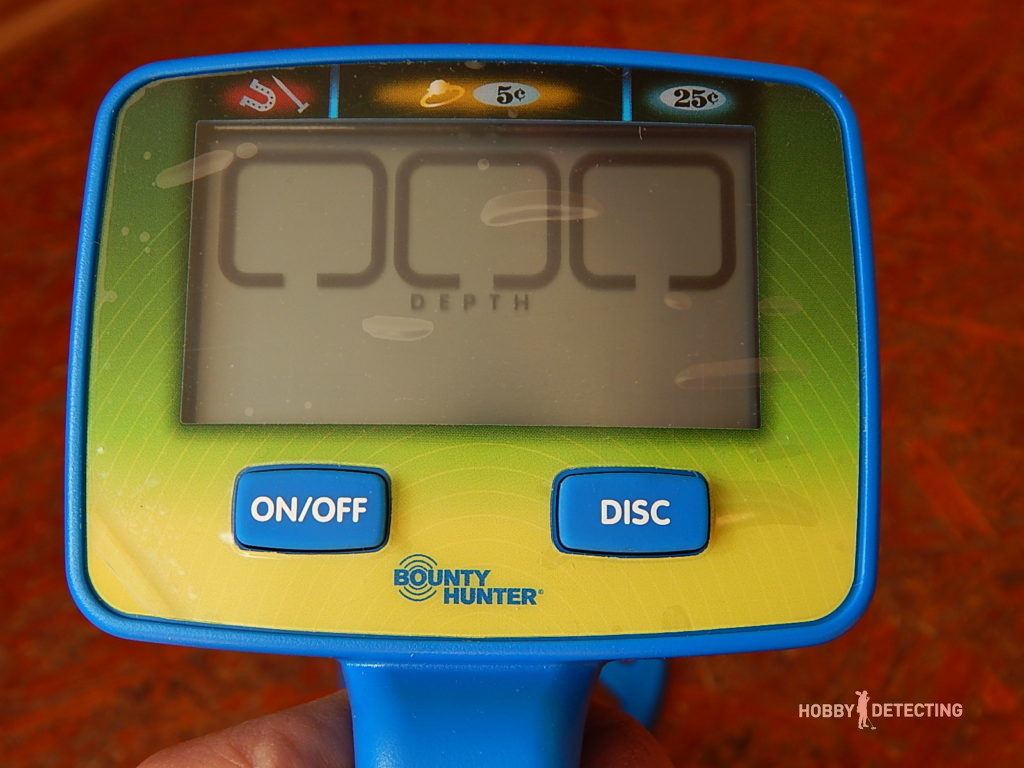 After the moving coil hits a metal object, the metal detector shows it into one of the three squares. So, if the discovery of iron, the display illuminates the first box with the “sad face” and sounds a low tone. 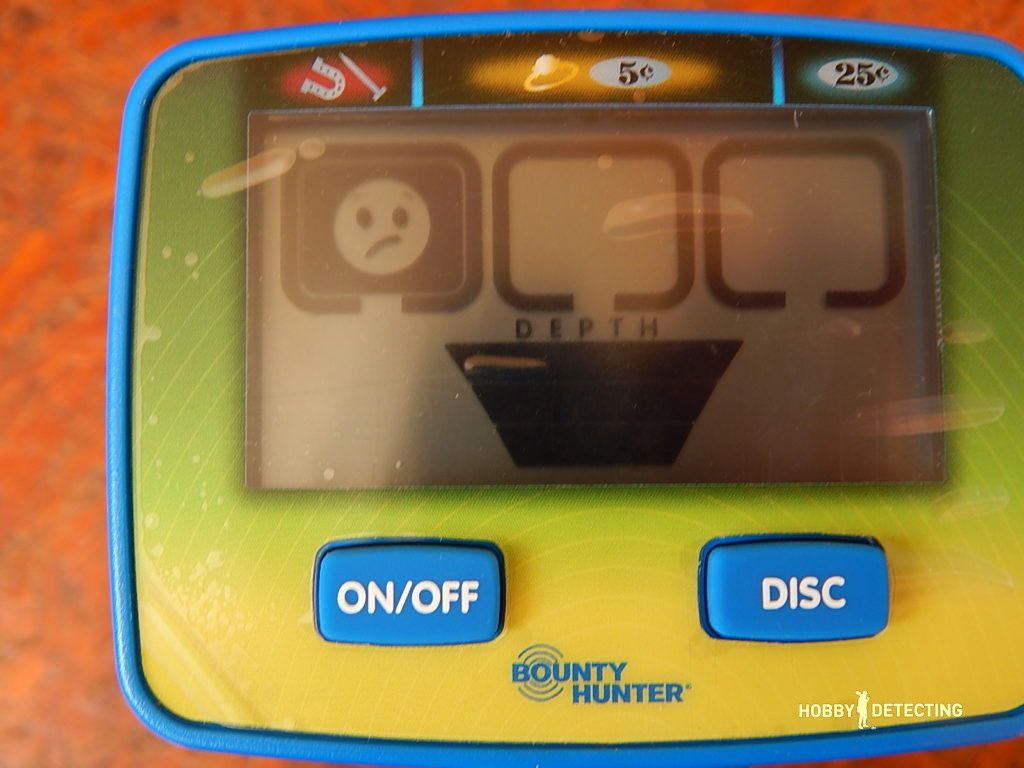 Other finds of non-ferrous metal will be announced in a middle-tone and will appear as a “puzzled face”. 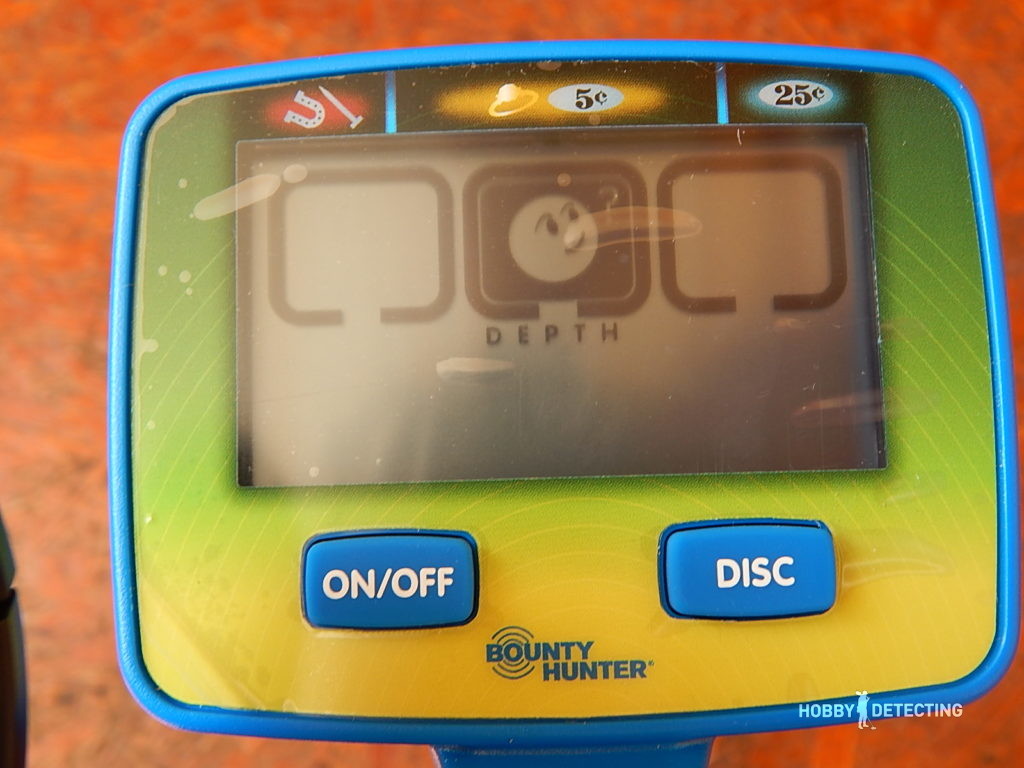 For example, copper coins and large targets (beer cans, old cans) will sound a high tone and light up the third box with the “happy face”. 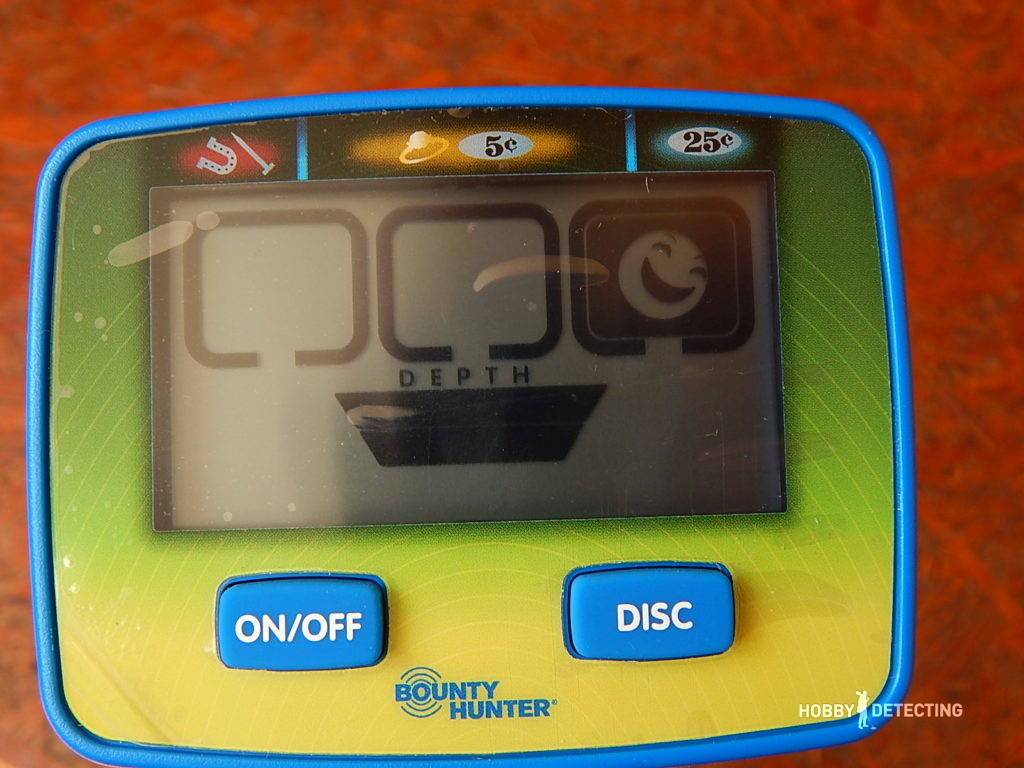 Whenever it detects a metallic target, under “depth” there will be displayed a column of three segments.
Probably the most interesting feature In the BH Junior T. I. D. is: if the coil is close to a metal target, it sounds a long tone and the screen shows only one label “lift coil”. 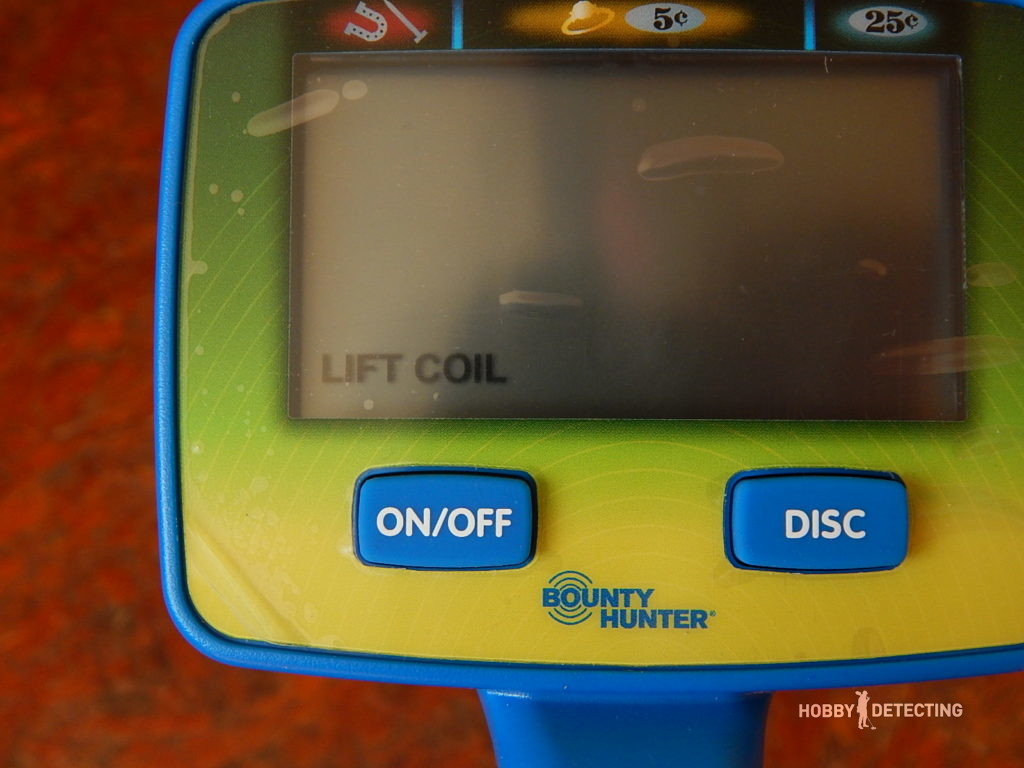 This function tells the operator that the metal object is very close. I love this ability on detectors, since there is no digging, because know that there is most likely some trash.
If the voltage drops in the power sources to the critical value, in the lower right corner there will appear a corresponding icon.

Under the display of the Junior, there are just two big buttons: ON\OFF and DISC.
The first is to turn the detector on and off. A simple press is not enough; you will need to hold the button. This is done in order not to accidentally turn off the detector.
The right button is responsible for exceptions to the detection of a certain category objectives. So, once pressing it, the screen removes the first box – the metal detector ceases to see finds from that segment. 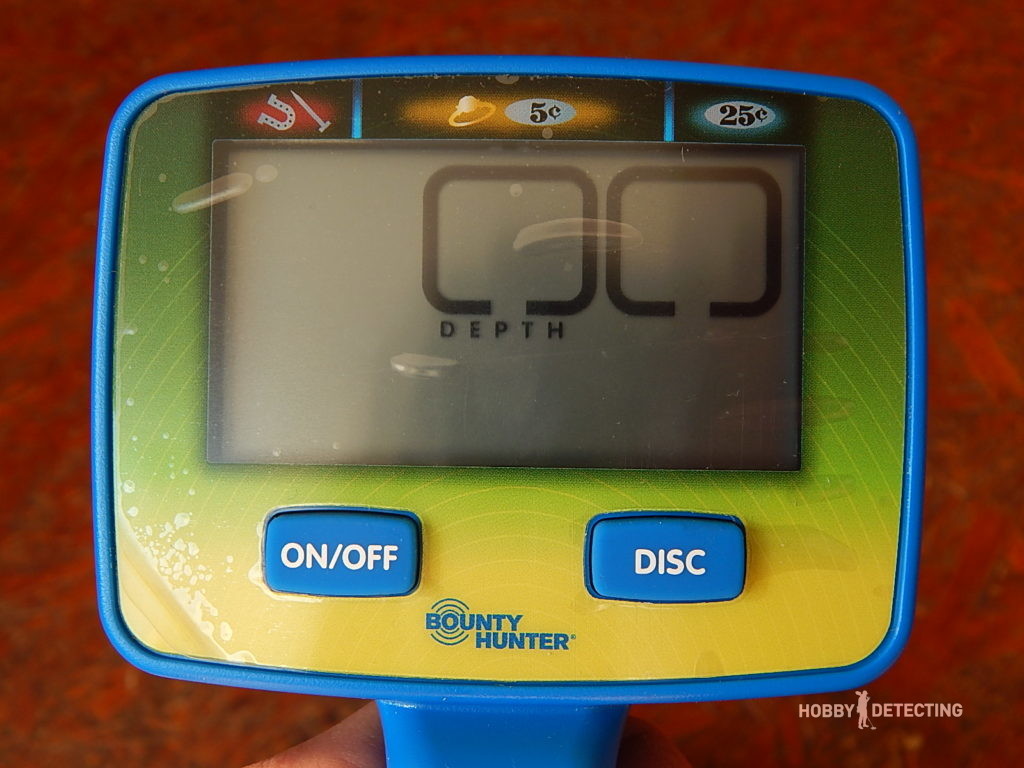 Pressing the disc button once more will switch off the second box, and the detector will not sound in that segment either. 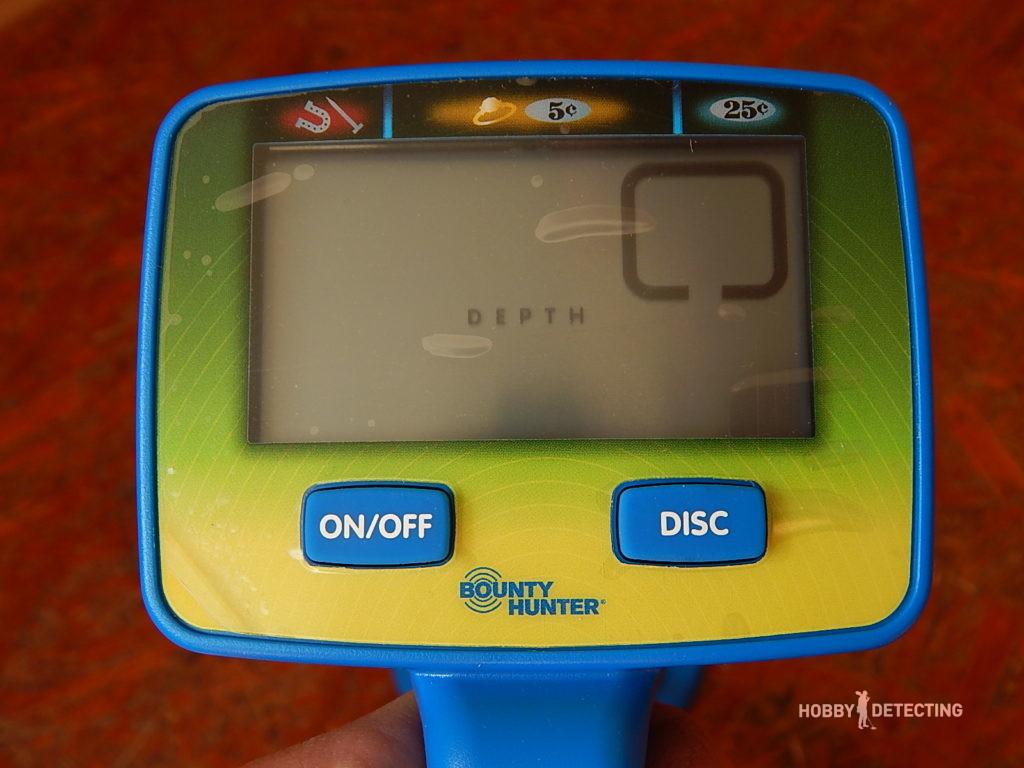 If you press the button again, all segments will be included in detection.
And this is all the settings which can be changed on the detector.

Tests
I conducted some depth tests with this detector, and it detected objects at about the same distance as the “Ground EFX CYCLONE” detector. For such a coil, it is a good indicator. And why would a kid want to dig any deep pits?
Technical data of the metal detector.
If someone does not want to read my whole story, because they only want to know the technical data of the Bounty Hunter Junior Target I. D., I will bring these values in a simple manner.

The Result
I have a very good impression of this detector. Because this detector has a nice design, fun interface, easy to understand, with a fast, clear and loud response, adjustable size, easy setup, light weight, and affordable batteries. The Junior T. I. D. reacts on a metallic target no worse than the “adults’” detectors. Undoubtedly, this small detector will give a child the proper understanding of the fundamentals of detecting.

Want to read more interesting reviews? We gather them all here!